Leonard Cohen is gone: The broken-hearted scoundrel and master of lament dies at home, "writing up until his last moments"

The 82-year-old lord of lament recently completed his 14th, and many say greatest, album 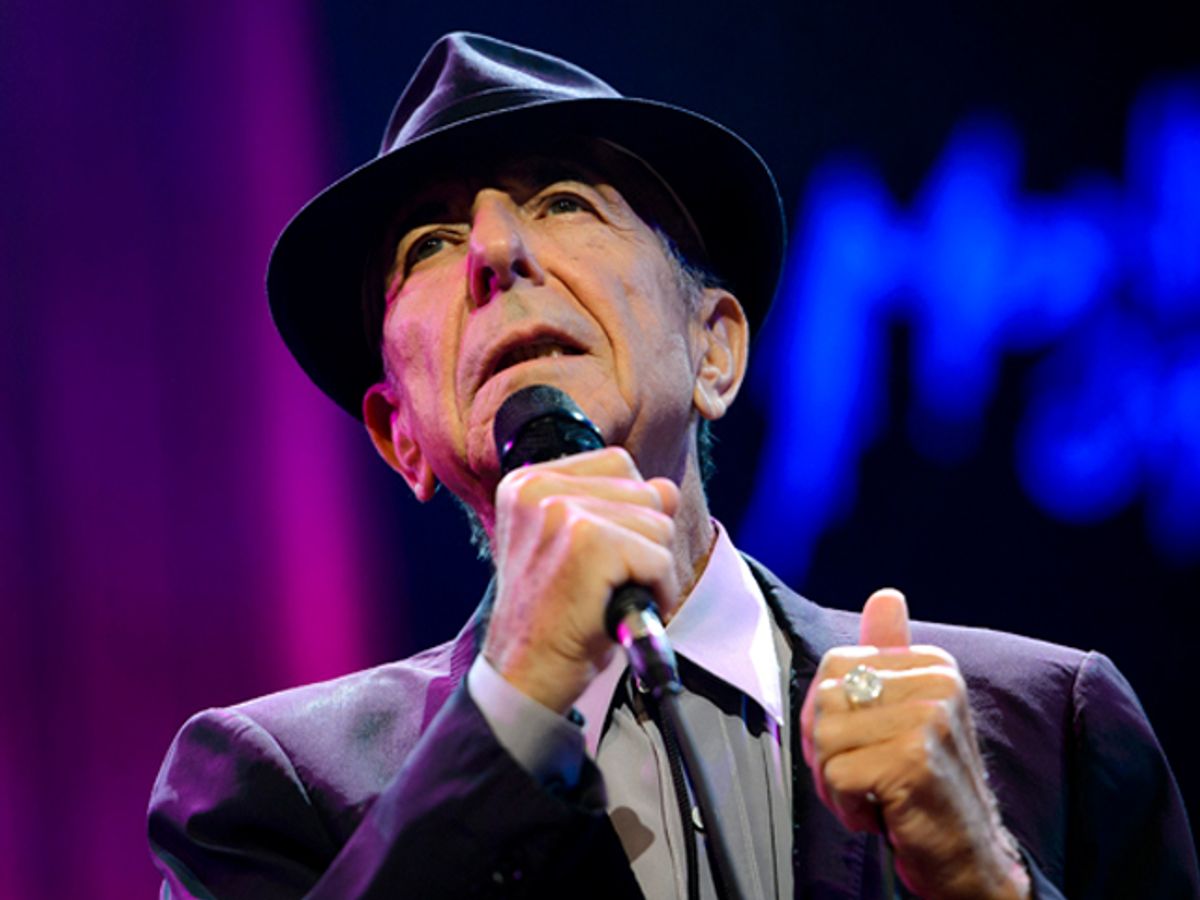 In a year marred by unexpected musician deaths, it was still shocking to read the status on Leonard Cohen's Facebook page early Thursday evening: "It is with profound sorrow we report that legendary poet, songwriter and artist Leonard Cohen has passed away. We have lost one of music’s most revered and prolific visionaries."

He was 82, and had released a well-regarded new album, "You Want It Darker," just weeks before. "My father passed away peacefully at his home in Los Angeles with the knowledge that he had completed what he felt was one of his greatest records," son Adam Cohen added in a statement to the CBC. "He was writing up until his last moments with his unique brand of humor."

The parallels between Cohen and David Bowie — who released a new album, "★," mere days before his death — are hard to ignore. Unlike Bowie's death, however, Cohen's passing wasn't entirely unexpected. In a lengthy, engrossing October New Yorker profile, he told David Remnick, "I don’t dare attach myself to a spiritual strategy. I don’t dare do that. I’ve got some work to do. Take care of business. I am ready to die. I hope it’s not too uncomfortable. That’s about it for me."

Over the summer, when he found out his onetime muse Marianne Ihlen was dying of cancer, Cohen wrote her a touching letter, with portions of it shared by her friend Jan Christian Mollestad on the CBC: "Well, Marianne, it's come to this time when we are really so old and our bodies are falling apart, and I think I will follow you very soon. Know that I am so close behind you that if you stretch out your hand, I think you can reach mine."

That clearheaded grace in the face of the inevitable also permeated "You Want It Darker," a record that doubled as an elegant, tenacious chronicle of romantic, religious and personal regrets. "I don’t need a reason for what I became/ I’ve got these excuses, they’re tired and lame," he drawls on "Leaving the Table," his voice craggy and solemn. "When I walked away from you, I turned my back on the devil/ Turned my back on the angel too," he intoned on "On the Level," a sly sparkle in his voice.

But from his very first album, 1967's "Songs of Leonard Cohen," the musician was mourning what he didn't have and preparing for inevitable disappointments and endings. "So Long, Marianne," one of his most famous songs, reads as an elegy for his relationship with the real Marianne, despite the fact the pair were ostensibly still together. And "Winter Lady" encourages a "trav'ling lady" to stay overnight but holds no illusion of permanence: "I'm just a station on your way/ I know I'm not your lover."

The sense that Cohen was always waiting for the other shoe to drop gave his albums a permanently melancholy tone. He stoked those fires with dusky instrumentation full of classic flourishes: flamenco guitar chords, unadorned folk, smoldering jazz, sinewy blues. The Beatles "didn’t seem to be essential to the kind of nourishment that I craved," Cohen told The New Yorker, which made perfect sense: His music diverged, evolved and mutated separate from rock 'n' roll's DNA, which made even his contemporary-sounding albums feel slightly left of center.

The 1977 Phil Spector-produced "Death of a Ladies' Man" sounds like a fun house mirror take on the Wall of Sound, one full of free-floating menace and disorientation, while 1988's "I'm Your Man" strips away any synth-pop frippery to expose utilitarian keyboards and drum machines.

As the latter album proved, Cohen fought back when life pushed him around. "I'm Your Man" kicks off with "First We Take Manhattan," a steely snarl that promises swift action in the face of adversity, while 1991's stark song "The Future" is an even sterner warning shot: "And now the wheels of heaven stop/ You feel the devil's riding crop/ Get ready for the future: It is murder."

In fact, Cohen himself always thought he deserved redemption, that there was always room for a second chance or one more rendezvous. "Have mercy on me baby/ After all I did confess," he says on "Anyhow," a song from his 2012 album "Old Ideas." "Even though you have to hate me/ Could you hate me less?"

And up until the end, he never let himself be fully engulfed by cynicism or fatalism. In between the regrets of "You Want It Darker" is a surprisingly tender song, "If I Didn't Have Your Love," which expresses deep gratitude for a partner's presence and affection.

Over the years, Cohen grew into his voice. While eager and conspiratorial on his sparse, folk-leaning early albums, it gradually deepened into a midnight-dark baritone croak as his career progressed. That gave his social and political commentary more weight; he often sounded like a wizened sage who had seen it all and had some wisdom to impart.

"Everybody knows that the war is over/ Everybody knows the good guys lost," he drawls on "Everybody Knows." And his gruff tone made caddish moments — say, "And if you want a doctor/ I'll examine every inch of you" — feel cheeky rather than sleazy. Yet Cohen's crass moments weren't superfluous, a testament to his poetic spirit and way with language; he clearly labored over each and every song, making sure that every syllable and word choice was as stylish as calligraphy. The effort paid off: Without fail, his lyrics are just as effective without musical accompaniment.

That kind of meticulous approach was on display during an extensive, multiyear world tour that started in 2008, when he was 74. On this trek, Cohen was a spry, ageless figure who literally skipped on and off stage and performed with a band whose musical precision was astounding. His take on "Famous Blue Raincoat" during this time felt like the night's centerpiece. As flamenco guitar fluttered mournfully in the background, Cohen would recite the song's lyrics in a measured, haunted tone — before bringing on mass applause as he uttered one of his most indelible lines: "Sincerely, L. Cohen." The cordial lyric always had an air of devastating finality; with the news of his death, that line feels like it'll be an even firmer punctuation mark going forward.

Cohen would probably appreciate that since emotional ambiguity and keeping people guessing delighted him. After his "I am ready to die" quote in The New Yorker predictably caused something of a media firestorm, Cohen demurred while speaking to press on Oct. 13 in Los Angeles.

“I said I was ready to die recently," Billboard reports that he said. "And I think I was exaggerating. I’ve always been into self-dramatization. I intend to live forever.” At the end of the conversation, he reiterated that he wasn't planning on going anywhere: “I hope we can do this again. I intend to stick around until 120." \

Up until this week, that felt entirely possible. His life revolved around constant reinvention and rebirth because instead of giving into darkness, Cohen found the most beauty in forward momentum.