Nick Offerman on his new show: "There’s no attempt to go with mainstream popular culture" 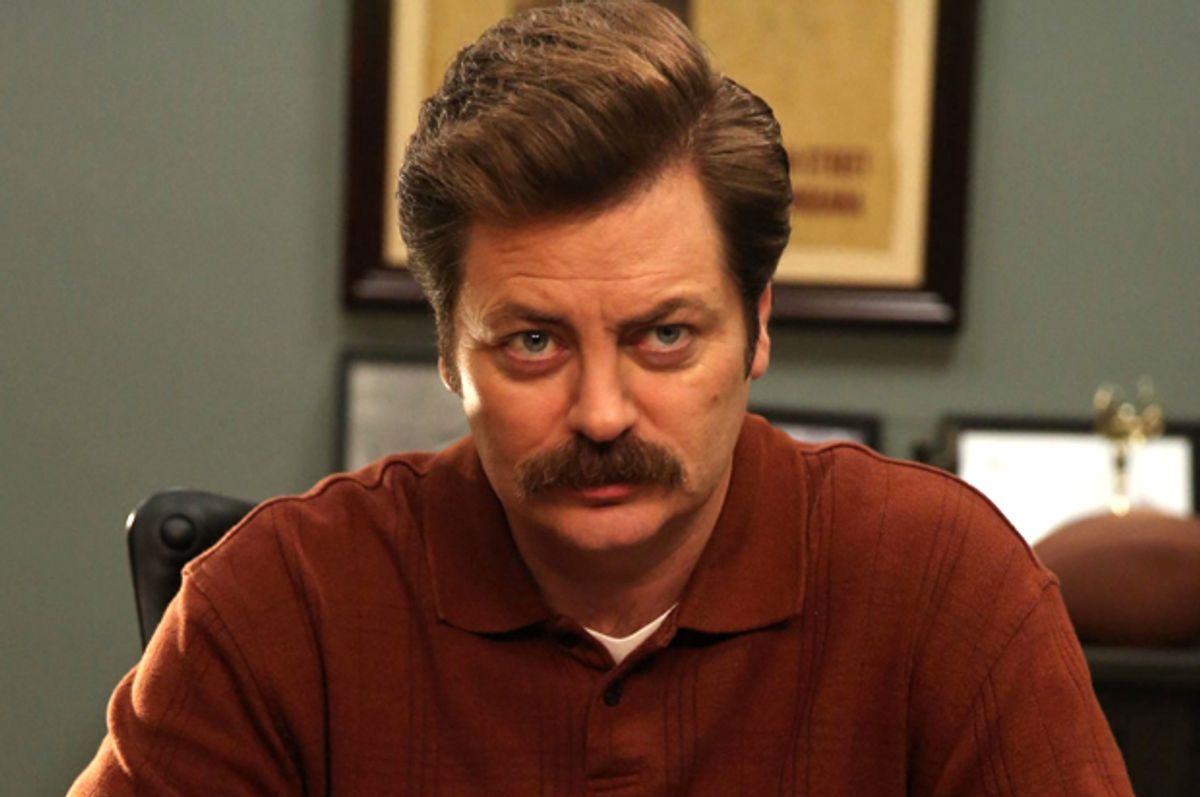 Audiobook giant Audible has just announced a new set of comedy shows including “The Comedy Show Show with Will Arnett,” “Hot Mic with Dan Savage,” and “Bedtime Stories for Cynics,” a stand-up comedy show called “Limelight” and a humor show based on the magazine McSweeney’s. The shows will be part of the company's Audible Channels package.

Offerman hosts “Bedtime Stories for Cynics.” The burly actor, of course, is best known for his role as woodworking, single-malt sipping libertarian Ron Swanson on the show “Parks and Recreation.” In his Audible series, he introduces actors and comedians like Lewis Black, Patton Oswalt, Maria Bamford and Tommy Chong to tell their twisted tales, some of which are riffs on classic stories like "Goldilocks and the Three Bears."

Salon spoke to Offerman, who was in Los Angeles. The interview has been lightly edited for clarity.

So where did the idea for the show come from? Was it yours? And what were you trying for as you cooked it up?

Well, I love working with Audible doing books. And considering the subject matter, they figured, “We need someone who is just shy of putting our listeners to sleep.”

Right, these are bedtime stories.

So I think that’s how they think of me. I was tickled to be asked to take part. I’m a big fan of the participants.

Let’s talk about some of them. You are a presenter, here and do the introductions but let other people tell the stories. What are you looking for in the people who write and tell these grim bedtime tales?

Well, these are some of the best comic minds working. I love the sort of underground feeling of it; there’s a darkness to some of these stories. There’s no attempt to go with mainstream popular culture. That’s just never as funny as the slightly unhinged collection of writers and readers we have.

The ones I’ve listened to have a lot of dirty words, violence, gross stuff — especially the Goldilocks episode. Were you guys trying to write stuff that was as far as you could get from a standard kid’s fairy tale or bedtime story?

I don’t think there was any particular agenda to distance ourselves. It was kind of like an improv comedy game: Take any watered-down children’s story and add the most fucked-up twist you can.

Right, try to make it funny and outrageous however you can do it.

Yeah, taking a presumably safe and comforting medium and  turning it on its ear. Because it’s very funny.

You do the introductions here. What’s that guy like? Is the guy who welcomes everyone to story time really you or is he a Ron Swanson kinda guy? Or is it something else entirely?

No, nothing I ever do will be a Ron Swanson kinda guy. Ron Swanson was written by people a lot smarter than me. And I feel like this is much more like a cracked Orson Welles: There’s an avuncular quality but in this case your uncle might seem a little creepy, but he’s probably going to have a little bit of weed in his pipe. He’ll tell you some things you might not have known. He’ll take you up to the line but won’t cross it.

Right. But it sounds like you can’t just slip into a Ron Swanson persona. If you were on stage at [Los Angeles club] Largo or at dinner joking around with friends and family, you can’t just “do that character” off the top or your head.

Well, I choose not to. . . . I would happily play Ron for decades if Mike Schur was still producing the show. And I can easily put on a Ron Swanson sensibility for a brief statement — like “I would not like any chutney on my sandwich, thank you very much.” I can give the flavor. But people sometimes ask me, Can you do Ron on some topic? A brief statement? And I say, “No, he doesn’t entirely belong to me. And I’m simply not clever enough to write him as well as the writers.”

For a lot of us in California, where Trump has very little support, it’s been a startling and rough couple of days. Did the election take you by surprise at all?

Certainly it was a devastating surprise. I have a lot of really strong feelings about it, but I’m trying to suppress them and take a deep breath. For those of us who are progressively minded, who cast our vote for human decency rather than some sort of childish vengeance, I think we’re doing a pretty good job of making our absolute dissension known without resorting to the hatred or violence that are the hallmarks of Trump supporters.

It’s funny. I wrote a tweet that said, “This is very shameful that we’ve made this decision, I’m embarrassed for the country.” And Trump supporters jumped all over me and said, “I can’t believe all this hate you're spewing.”

Yeah and called me all these names and cursed at me. . . . And the key to that is to not engage, not to get into a shouting match. They’re coming from a very emotional place; they’re not relying on rationality and logic. If they’re able to live in denial about all the transgressions of their candidate that have been documented — just during the campaign, not over his whole life — their blindness and tunnel vision is frightening.

But I am so encouraged by the rationality of our side. There was a letter printed this morning by [Amy Poehler’s “Parks and Recreation” character] Leslie Knope that brought tears to my eyes. It says, Look, we’re all human beings, there are times when we do stupid things. We’ve got to say, we really shit the bed on that one. Let’s all together and figure out what our next set of sheets is. Because I think we’re gonna have to burn the current bedding.