This can't become our new normal: Hate acts reported across the country in wake of Trump's victory

Minorities, LGBT people and women are reporting vandalism and worse in Trump's name. White people need to speak out 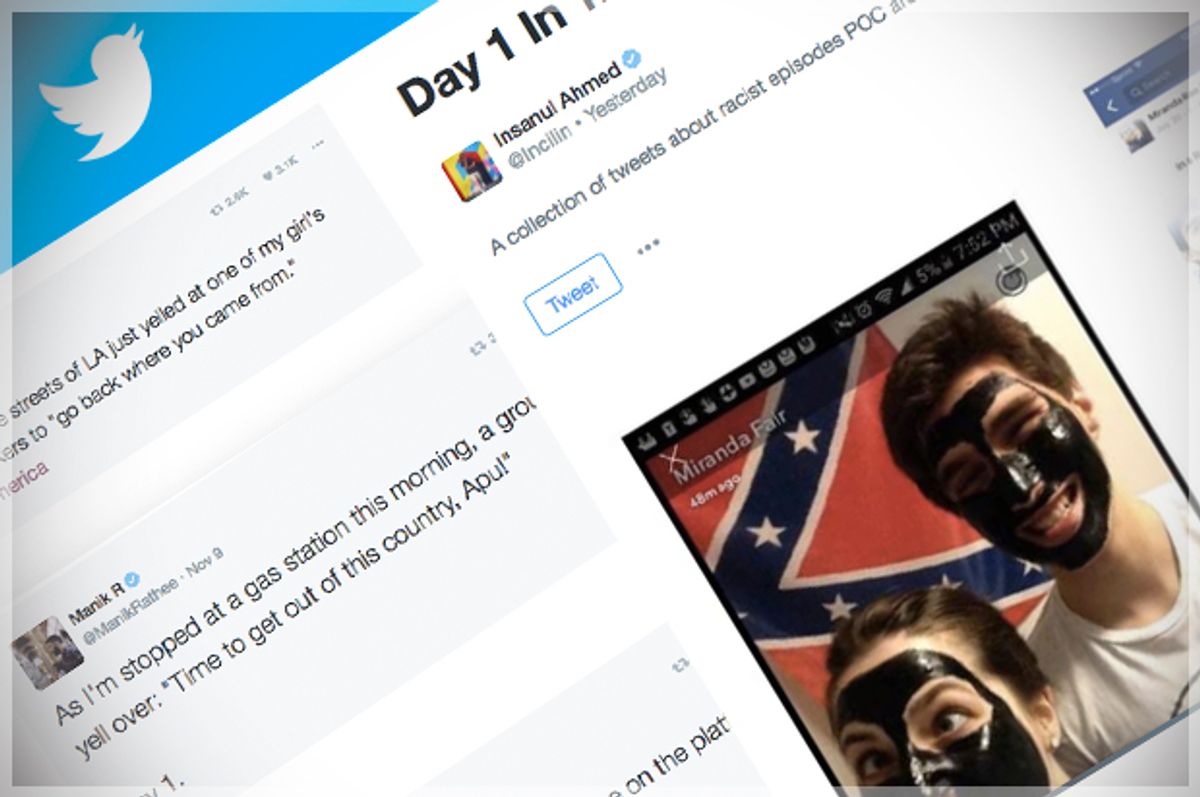 White people voted Donald Trump into office — not all white people, of course, but white people. To nearly everyone’s surprise, however, the good white people secretly sighing over Trump’s bigly manliness weren’t the people of Wal-Mart or any other ignorant hillbilly redneck stereotype, but stay-at-home wives crushing on the billionaire lifestyle, breadbasket  evangelical Christians and white-collar workers with retirement portfolios.

In other words, the Donald mesmerized the college educated, solidly middle class and suburban bourgeoisie into voting for him. As Paul Mason noted in a trenchant analysis, Trump won “because millions of middle-class and educated US citizens reached into their soul and found there, after all its conceits were stripped away, a grinning white supremacist."

The data backs Mason up. The Trump phenomenon was never solely about economics; the global rise of right-wing xenophobia and white racial identity politics has played some role as well. Ironically, this fact is so plain that most pundits apparently assumed that a Trump presidency could never happen in the U.S. precisely because the American Dream is — or rather, was — predicated on a Judeo-Christian model that accepts all comers in its nondiscriminatory ecumenical embrace. "Give me your tired, your poor/ Your huddled masses yearning to breathe free." The famous lines written by Emma Lazarus on the base of the Statue of Liberty are riffs on Matthew 11:28. “Come to me, all you who are weary and burdened, and I will give you rest.” Xenophobia and selfishness are, simply, un-American values.

But the American reality has always been about violently affirming the political power of whiteness. One supposes that this is what Trumpers meant when they applauded the Donald for “telling it like it is.” Arguably, he won because of, and not in spite of, his bigotry, sexism, vulgarity, anti-intellectualism, willful ignorance, false piety, charlatanism and incompetence in business. By reveling in his abject failures as a human being yet refusing to apologize for them, his very existence was a weirdly honest acknowledgement that the American Dream was always just that — a dream. The “real” America ached to be acknowledged. And this gritty body politic was not America the Beautiful but America the Bully.

On Nov. 9, Day One of Trumpland, people of color started turning to social media to report physical assaults, verbal abuse and hate crimes being perpetrated against them. (See a growing list of depressing tweets being collected here. More stories are being collected on a dedicated Tumblr called “It Has Begun 2016.”) New York Daily News columnist Shaun King's Twitter feed has been serving as a hub for self-reported racist attacks, most of which are subsequently confirmed via local news outlets and police reports.

They are not, despite the conspiracy theories inevitably advanced by Trumpers, hoaxes and false flag operations concocted by Hillary Clinton supporters in an attempt to cast Trump in a bad light. Only the willfully blind can fail to see that President-elect Trump has made racism culturally permissible, given that attackers often explicitly connect their hateful acts to his leadership. For example, here is a G-rated one: “Aren’t you [black and brown people] supposed to be sitting in the back of the bus now? Like Trump is president!” The reports go on and on and on.

Around the country, spray-painted swastikas are appearing, including one proclaiming, "HEIL TRUMP." A nonwhite author of my acquaintance just discovered that her college visit was canceled because someone draped a noose around the neck of a black doll and left it in an elevator. Ellen Oh of We Need Diverse Books tweeted that well-dressed white boys were walking past people of color at the mall and hissing, “Trump” at them.

Racist messages are appearing in schools, such as one scrawled on a black student’s locker in a high school in Minnesota, saying “F**k N*****s." Offended by the language? Be offended that a teenager thought this was OK to write.

There are dozens upon dozens of similar reports of foul invectives being hurled at children of color around the country, as well as unconfirmed reports that eight trans kids responded to the news of Trump’s election by committing suicide.

All this and more, in just 36 hours, at the time of this writing, in Trumpland.

Even manicured lawns and swollen bank accounts can’t protect bourgeois families from being exposed to the racist bile because the bile is being hurled by their own. The town of Wellesley, Massachuestts, is one of the wealthiest and most attractive suburbs in the country. It is the home of Wellesley College, a private women’s liberal arts college and Democratic presidential nominee Hillary Clinton’s alma mater.

Yesterday, two young white men drove a blue pickup onto the serene oasis of Wellesley campus, while prominently flying a Trump flag from the truck bed along with Confederate regalia. Violently inserting themselves into the well-tended landscape, the two white men laughed and screamed as they sped by startled female students, so proud of themselves for acting like racist jerks that they made a video of it. Various Wellesley students reported that they harassed women of color and openly queer women, calling one student a "dyke." Then “they parked in front of the house for students of African descent and jeered at them, screaming ‘Trump’ and ‘Make America Great Again.’ When one student asked them to leave, they spit in her direction.”

Dear white people, it’s time for you to come get your boys.

Earlier this year for Salon, comedian W. Kamau Bell and best-selling author Adam Mansbach argued that Trump was “a white people issue.” That it was now incumbent on white people to feel embarrassment over Trump strictly on the basis on their shared whiteness, they said. To feel a racialized responsibility for him the same way that any person of color is made to feel whenever another black or brown person ends up on the news. For white people to recognize that Trump was not an aberration but the pinnacle of white institutionalism. That it was time, in other words, for good white liberals to “come get their boy,” to sit him down and set him straight before things became worse.

Well, they’re worse. Newly released from the tyranny of “leftist political correctness,” apparently white men are not only unleashing their resentment against highly accomplished women by openly harassing them, but they are also rightly expecting to be rewarded for their misogyny. This is the lesson of former "Access Hollywood" host Billy Bush and President-elect Trump, both of whom profited quite handsomely from doing exactly that.

These charmers are not the hardscrabble sons of the Confederacy but the educated scions of wealthy East Coast families. I’m talking about Bush and Trump, of course, but also about the Wellesley spitters: They are currently enrolled at nearby Babson College, which has not identified them to the press. Meanwhile, on social media, students at Babson are circulating their names and their reputed connections. Their exploits are known because they bragged about them. There are multiple eyewitnesses and photographs. They directly invoked Trump as motivating their racist actions.

They are not George Soros and John Podesta wearing “Mission: Impossible” masks. Yet their fellow students at Babson apparently do not expect the administration to discipline them, let alone the local police to do anything. Their fraternity, to its credit, did expel them, according to The Boston Globe.

This bunkered institutional response, this systematic marginalization of the most vulnerable, this dismissiveness of those without social standing, without deep local roots, without entrenched professional networks and the reflexive goodwill of authorities — this whole nexus of things unsaid and the reality of legal rights as a selective political net is why nonwhite American citizens, as well as LGBTQ and religious minorities, and people with disabilities are now legitimately fearful for their safety in this country.

To read the litany of humiliations and attacks on people of color will induce fear in any person possessed of some degree of empathy. But what is truly terrifying is to realize, with the cold pain of a searing truth slicing like a knife through your eye, that nice white people are going about their day, loftily pretending that none of this is happening.

These incidents are ugly. Nice white people prefer to live where Life is Beautiful™. Even once white people are made aware of the sudden proliferation of racist and sexist abuse being done in Trump’s name, the majority react by seeking to minimize its effects. It’s just name calling, bitch. Grow a spine, snowflakes. What does Trump have to do with it? He didn’t spit on you, did he? Because white institutionalism will protect its own, using the PR of public patronage to whitewash its sins.

Many of these incidents are taking place in schools, and the perpetrators are white teenagers and children. They are feeling out the limits of permissibility, testing out the new rules. The lack of response from other white people is tacit confirmation that being a racist is the new cultural norm as well as a social necessity to prove your bona fides as one of Trump’s minions and future member of "Trump Youth."

Good white people must start calling this out before the full rage is unleashed after Trump is sworn in, doing the work to make it clear to other white people, through action, words and deeds, that that neo-Nazism, white nationalism and all the rest is not condoned by what remains of the American experiment in democracy.

This work is difficult. It’s easier for white people to mock and belittle, lest you have to confront your peers and say to their face: This is not OK, we are better than this, that Trumpers are not the racist bullies the Hillbots accuse us of being. By saying nothing and doing nothing, however, you merely confirm that yes, actually, you are.

I know a lot of Trump voters yet can’t name a single one who repudiated the Ku Klux Klan's formal endorsement of Trump, who decried the celebrations of white nationalist leaders following his election or said one word regarding the anti-Semitic threats being spewed at Jewish journalists throughout Trump’s campaign.

Good white people must stop telling themselves that overt racism is the behavior of a few outliers or claiming that it's the work of impoverished rural whites who don’t know any better. When children in schools around the country repeatedly chant, "Build a Wall" in order to taunt their Latino peers (as reported by the Detroit Free Press), this is good evidence that the racist rot is broadly cultural, not localized and exceptional. And these behaviors are learned.