What will the Trump administration look like? Our first clues are uniformly awful

At least the underqualified president-elect will hire a team of experienced pros, right? So far, not so much 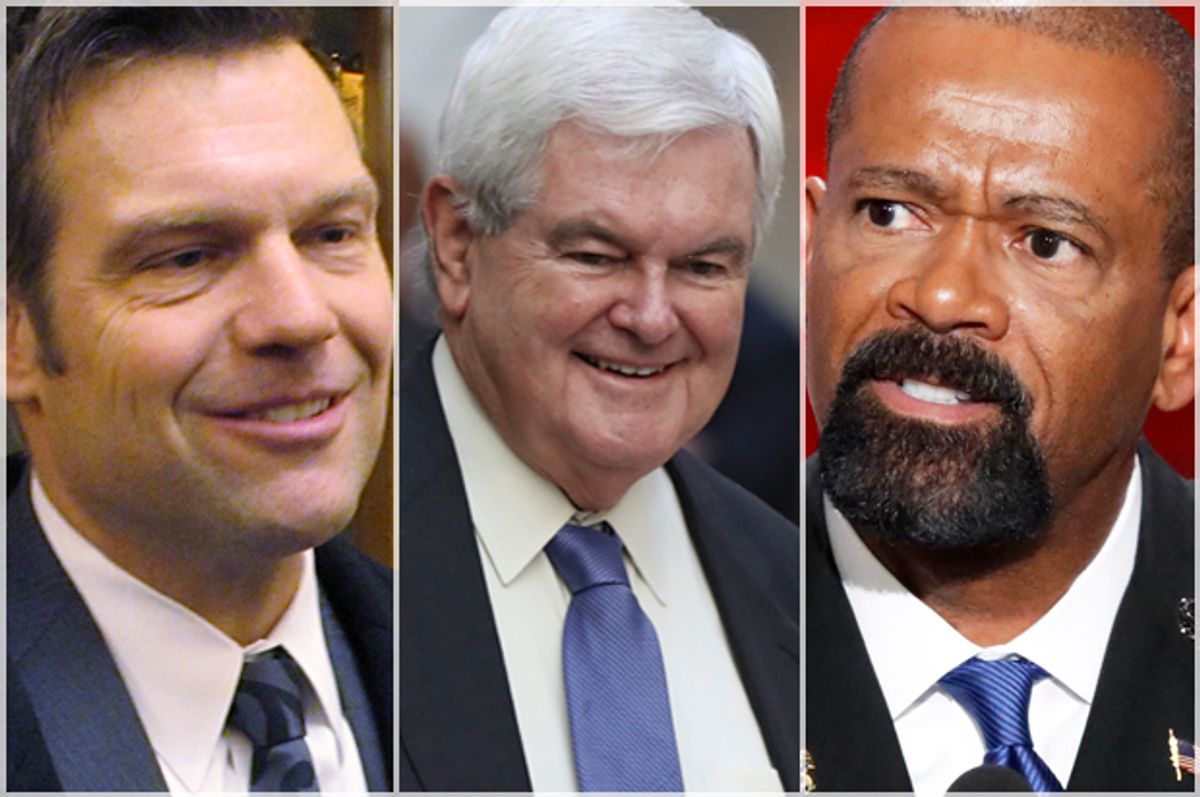 I think many of us are still walking around in a daze, unable to fully process what has happened. Yesterday offered the disorienting tableau of a President-elect Donald Trump sitting next to President Barack Obama in the White House after the two had had their first meeting together. The president explained that they had had a wide-ranging discussion and that he and his team were committed to having a smooth transition and would do all they could to help. He said he wanted to help Trump succeed so the country could succeed.

Trump responded by saying that the meeting went on longer than he expected but as far as he was concerned he could have gone on longer. And then he concluded with this:

If you didn't actually hear Trump say those words, you would have thought it was his 10-year-old son Barron speaking instead of him. Nonetheless, everyone acted as if it was perfectly normal that the president-elect sounded as if he'd never before thought about what the man he had called "the founder of ISIS" actually did. (They didn't take questions from the press, so nobody got to ask him what he meant by "some of the high-flying assets.")

And then late last night it got even weirder. Trump tweeted this:

Just had a very open and successful presidential election. Now professional protesters, incited by the media, are protesting. Very unfair!

Considering the things Trump has said about protesters (and the press) in the past, this sounds very ominous now that he's going to be the most powerful leader in the world. Recall that as far back as 1990 he's made his views clear about what leaders should do in situations of turmoil.

When the students poured into Tiananmen Square, the Chinese government almost blew it. Then they were vicious, they were horrible, but they put it down with strength. That shows you the power of strength. Our country is right now perceived as weak . . .  as being spit on by the rest of the world.

It should probably come as no surprise then that one of the people he's looking at to run the Department of Homeland Security is Sheriff David Clarke Jr. of Wisconsin's Milwaukee County who shares his views, as demonstrated by his tweet:

These temper tantrums from these radical anarchists must be quelled. There is no legitimate reason to protest the will of the people. pic.twitter.com/G502pwNSN9

Both Clarke and Trump have called for protests themselves in the past but apparently things are different now.

Aside from Sheriff Clarke, the administration Trump is apparently starting to pull together looks like it's going to be staffed by his TV surrogates and campaign staff. As Salon's Brendan Gauthier has has reported, the top names floated so far are former House speaker Newt Gingrich for secretary of state and ex-New York mayor Rudy Giuliani for attorney general, although the latter have to arm wrestle Gov. Chris Christie for that job. (It's fair to assume that the job of James Comey, the FBI director, is safe and he will fulfill his 10-year term with no interference.)

It seems unbelievable, considering the fact so many people have been convinced that Trump is really a populist, but he is also said to be considering two titans of Wall Street. First there was former foreclosure king and Goldman Sachs executive Steven Mnuchin, and on Thursday the campaign floated JPMorgan's Jamie Dimon as a potential secretary of the Treasury. You couldn't make this stuff up.

Trump tweeted a while back that his adviser Michael Flynn, a retired general, would make a great secretary of defense but apparently nobody told him at the time that Flynn is not eligible. Former officers are not allowed to run the Pentagon until they've been out of active duty for seven years. Flynn was fired from his post at the Defense Intelligence Agency in 2014, which he attributes to his hawkish views. So perhaps he'll stay in the White House with Trump serving as his national security adviser. (He believes "Islam is a cancer," so that should work out well.)

Sen. Jeff Sessions' name has been floated for the defense secretary role, too, although it seems an unlikely post for him. His specialty is the law and his issue is immigration.

And when it comes to that all-important issue of immigration policy, Trump announced on Thursday that he had named Kris Kobach, the Kansas secretary of state and hard-core anti-immigration activist, to his transition team. Koback wrote State Bill 1070, the infamous Arizona "show me your papers" law, which was later overturned by the courts. He has been informally advising the campaign about immigration and was supposedly the one who convinced Trump how the government could find some way to make Mexico pay for the mythical border wall.

You'll notice a pattern: The only people named so far are those who supported Trump. Loyalty is his top priority, not experience, which explains why he is reportedly thinking about appointing Steve Bannon, his campaign CEO and former chairman of Breitbart Media, as his chief of staff. Other names floated have been his campaign manager Kellyanne Conway and deputy campaign manager David Bossie as well as Corey Lewandowski, the former campaign chairmanTrump fired last spring. Finally there's Reince Priebus, the outgoing head of the Republican National Committee, who is said to be enthusiastic about the job. All in all, it looks like he's keeping the band together one way or the other.

There's also a climate change denier for the EPA, a fracking billionaire for the Department of Energy and another oilman for Department of the Interior, although it's rumored that Trump wants to hire a woman for that job, so the names of former governors Sarah Palin and Jan Brewer have come up. The Texas agriculture secretary who tweeted last week that Democratic presidential nominee Hillary Clinton is a "cunt" may be rewarded with the Agriculture Department. The first congressman to endorse Trump has apparently told friends that the incoming president has promised him the Commerce Department.

If people really believed that Trump would choose top-notch political and policy talent to make up for his lack of experience and knowledge, that isn't going to happen. He's sticking with his motley crew probably because he simply doesn't know he needs serious people around him. But then, he may not have much of a choice. According to the Daily Beast, the Trump team has been unable to get national security professionals to sign up for the many second-tier and lower jobs that will open up in a new administration. It's likely true for domestic areas as well. No actual professional will want the Trump administration on his or her résumé.