How did we get here? Largely by way of Bill Clinton, Barack Obama and the big GOP victories of 1994 and 2010

Trump's victory is a shock — but its history goes back through two Democratic presidents, and two big GOP wins 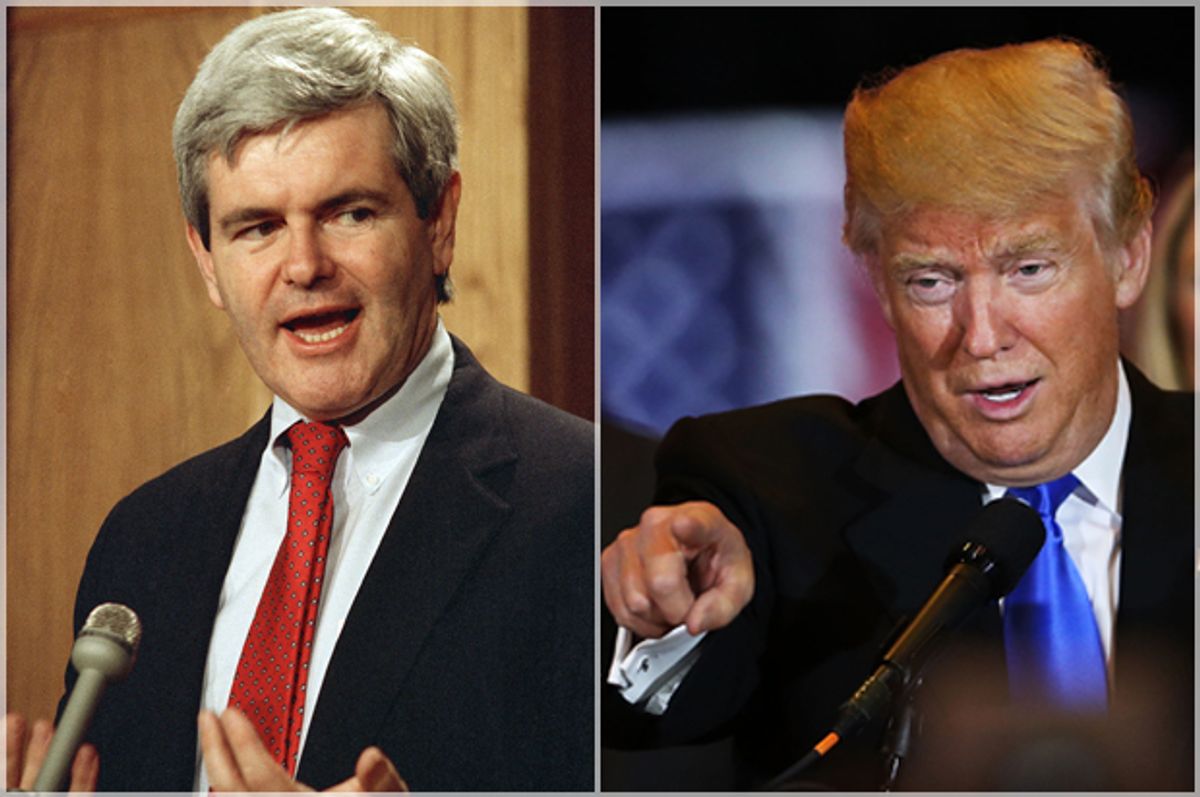 After Barack Obama was elected in 2008, he repeated the same kinds of pundit-pleasing, anti-populist neoliberal mistakes that Bill Clinton made after he was elected in 1992. That resulted in even worse losses in the following midterm election than had been seen in 1994. Historic losses in the House during the Tea Party wave election were echoed in state legislatures across the country. Only now, with the shocking election of Donald Trump, are we seeing the full impact of Obama’s mistakes, which goes much farther than anyone could have imagined.

A striking geographic pattern underscores the connected nature of the two neoliberal policy failures. As nearly everyone will have noticed by now, Trump narrowly carried a string of northern industrial states from Pennsylvania through Wisconsin, where House Democrats had overwhelmingly opposed NAFTA in 1993, while Republicans embraced it. Former senator Russ Feingold’s disappointing defeat in Wisconsin this year further highlights how state-level losses in these backlash wave elections helped create permanent conditions that are difficult to overcome.  If Democrats still won’t learn their lessons now, they’ll never get a chance to make that mistake a third time.

Broadly speaking, as president both Clinton and Obama were more concerned with their own political stature and image than they were with the Democratic Party as a whole, and the people it was pledged to serve. This is not a critique of their personal characters, but rather a reflection on the political system they inhabited, with its neoliberal market logic “freed” from the social restraints of decaying traditional party power. This logic makes the candidate by turns a self-promoting entrepreneur, a consumer product sold to voters, and — most tellingly — an investment vehicle for donors. This mix of imperatives helps explain why Bill Clinton fought hard to pass NAFTA despite intense opposition from his party’s activist base, and why Obama made numerous “smart" and "pragmatic” decisions, such as passing a smaller-than-needed stimulus package, which all combined to demoralize his supporters and help the GOP win big in 2010.

On a more elevated plane, both men saw their missions as bridge-builders, unfortunately relying on questionable assumptions about whom they were trying to build bridges to. On a practical level, both believed they were playing “smart” politics within an elite donor-defined framework of policy options -- and arguably they were. But the result was a systematic betrayal of the Democrats’ traditional base, which both men survived personally due to their unique gifts, only to damage the party all the more. Numbers alone make this painfully clear, with record losses in the House and state legislatures in both 1994 and 2010, both of which left lasting damage that has only gotten worse over time.

Let’s begin by rewinding to 1992. After 12 long years of Ronald Reagan and George H.W. Bush, Bill Clinton was elected president with Democrats in charge of both houses of Congress. Trifectas like that had once been commonplace. Throughout most of American history, it was more common to have them than to have divided government. But from 1968 up until Clinton's 1992 election, only Jimmy Carter’s four years in office had seen a unified government. So Clinton’s trifecta was a big deal, and he was ambitious to get things done. Unfortunately, one of those things was NAFTA.

In fairness, Clinton didn’t dream up NAFTA. Ronald Reagan did. He didn’t negotiate or sign it. Bush did. But he did get it passed through Congress, twisting scores of Democrats’ arms as a symbol of his “pragmatism” in moving the Democrats back to the so-called center. (It's worth recalling that billionaire H. Ross Perot, who ran for president as a pragmatic centrist independent, opposed NAFTA as one of his central campaign planks.)

The irony here was twofold: First, in the real world, Democrats clearly occupied the political center during the Reagan-Bush years, dominating the House as well as a majority of state legislative bodies and retaking the Senate in 1986. What’s more, NAFTA was deeply unpopular with the Democratic base and their representatives. In the House roll call vote, Democrats opposed the treaty, 156 to 102, while Republicans overwhelmingly supported it, 132 to 43. Most telling, in light of the 2016 election results, were the votes of House members in the following states. Votes for the treaty are listed first in all cases:

So in those four states, which were carried by Donald Trump on Tuesday, only two of 35 Democrats supported the treaty, while only four of 28 Republicans opposed it. It could not possibly have been more clear whose interests each party represented in these key states. Heedless of their House members, the neoliberal Democratic establishment abandoned the party's base. Democrats have been paying the price ever since, but never as painfully as on Election Day 2016.

The second irony is that the “pragmatism” of NAFTA backfired so spectacularly, opening the way for the GOP to raid Perot’s base of support to retake the House in 1994. Ronald Rapoport and Walter Stone describe how this happened in their book “Three’s a Crowd: The Dynamic of Third Parties, Ross Perot, and the Republican Resurgence.” Newt Gingrich and future Ohio governor John Kasich led the way on this outreach to Perot, which was clearly reflected in Gingrich's “Contract With America,” which struck major Perot themes, such as term limits, while avoiding many social conservative themes. It was largely cynical, of course: Gingrich never favored term limits for himself, for example. But it reflected the way GOP could perceive an opening, and then move to exploit it.

How much did this matter? A lot: “Had Perot won the same popular vote [in 1992] as he captured in 1996 (8.4 percent, less than half of what he actually received in 1992), we estimate that the Republicans would have picked up about twenty-nine seats over what they held in 1992, leaving Democratic control intact.” That would only be three seats more than the average midterm losses from 1946 to 1990. Hence, Perot’s 1992 voters were crucial to GOP success in 1994, and the NAFTA vote was crucial to  securing their support. (For a more detailed discussion, see my May 2015 story here.)

Even this analysis significantly understates the impact, as we’ll see below when we consider impacts on state legislatures. But before we get there, let's look at how Obama echoed Clinton’s mistakes. Unlike with Clinton, there is no single outstanding Obama policy decision to point to, but rather several that are salient for different reasons:

Other failures could be added to this list, but the point should be clear: On issue after issue, decision-making in a neoliberal framework led to policies that failed to address the pressing needs of ordinary Americans, or failed to give them reasons to become more engaged in the political process. Given that Democrats already faced a challenge with getting their voters to turn out, adding more impediments was suicidal behavior.

We could sum up by saying that Obama promised “Hope and Change” in broad generic terms, but failed to deliver the most basic, tangible forms of what that would mean for millions of his supporters. He turned his focus instead to narrower attempts to build bipartisan cooperation, which were repeatedly undermined and rebuffed. In the neoliberal mindset, these efforts to find common ground in Washington were a core aspect of “Hope and Change.” But what people actually wanted were concrete solutions — solutions that Republicans, committed to their “government is evil” ideology, were never going to agree to. This was obvious to anyone not blinded by neoliberal ideology in the first place.

After the eight-year George W. Bush disaster, Republicans had no ideas for a positive agenda, but they did know how to fight. They poured enormous energy, creativity and money into that fight, which paid off spectacularly in the 2010 elections. The Democratic losses, even deeper than those of 1994, empowered the GOP to gerrymander themselves into unbreakable bastions of power for the rest of the decade, both in the House and in state legislatures, as former Salon editor David Daley explains in "Ratf**cked." (My interview with Daley is here.)

But gerrymandering was only one part of the GOP's grand plan, which also involved other forms of political warfare. These played out most vividly in Wisconsin from early 2011, and centered on breaking the power of organized labor while infusing vast quantities of outside dark money into the state’s political process and passing draconian voter-suppression laws.

All this was especially visible in the defeat of Russ Feingold. As The Nation’s John Nichols warned during the campaign’s closing days, an intensively negative flood of billionaire-backed campaign ads thwarted Feingold’s run. Sen. Ron Johnson’s 2010 victory over Feingold had been a fluke, benefiting from a depressed national voter turnout and the general mood of the electorate in a Republican wave election. But Feingold was heavily favored this year, and even the onslaught of super-PAC attacks might have fallen short if not for the systematic political warfare waged in the Badger State since 2010. The key to making all of this possible — not just in Wisconsin, but across the country — was Obama’s neoliberal mindset, which prevented him from going outside the box in which politics had been confined since early in the Reagan era.

These results in Wisconsin underscore the systematic nature of GOP billionaire-class political warfare on one hand, and the devastating folly and weakness of the Democrats' embrace of neoliberalism on the other. To understand the devastating impact of the latter — a necessary prelude to getting rid of it — we need to focus intently on what really happened in the elections of 1994 and 2010.

I’ve already mentioned the big midterm congressional losses of 1994 and 2010, but the biggest and most consequential defeats came not in Washington but in state legislatures. The change at that level has been earth-shaking, although largely ignored by the national media.

During the 1980s — the “Age of Reagan,” when the Democratic Party was supposedly being decimated — Democrats held control of both legislative bodies in as many as 34 states (with Republicans controlling only 11). They retained control in 29 states as late as 1992. In the 1994 midterms, that one-sided margin suddenly became a slight GOP edge, with Republicans controlling 19 state legislatures, Democrats 18 and the remainder divided. Control remained fairly balanced until the 2006 midterms, when Democrats gained an edge of seven states and upped that to 13 in the Obama wave of 2008. The GOP's midterm 2010 wave reversed things dramatically, giving the Republicans an 11-state lead. Since then Republicans have built an enormous advantage; after last week's election they will control a record-high 32 state legislatures, while Democrats hold 14 and 3 are split.

This historical overview supports the conclusion that shifting "to the center" made the Democratic Party much less attractive to the electorate as a whole -- which is, let us note, precisely the opposite of elite conventional wisdom. That is only strengthened by looking at aggregate totals of seats and percentages. In November 1994, the GOP picked up 380 seats in state houses and 106 seats in state senates. Democratic majorities fell from 58.7 per cent to 51.8 per cent in state houses, and from 58.6 per cent to 53 per cent in state senates.

That date is telling. For 80 years, the GOP had been the party of Wall Street, while Democrats were the party of the little guy. This worked out well for the Democrats, until two consecutive "centrist" presidents moved the party substantially to the right on economic issues, erasing a full three generations of history and now leaving us at the mercy of -- well, who knows what?

But the big question goes far beyond Donald Trump, and the Democratic Party's latest humiliation: Who will the Democrats decide to be? Or who will take their place?