"Westworld" is woke: Just like on the HBO show, technology is widening the gulf between haves and have-nots

Millennials watch "Westworld" with an added layer of awareness that frontiers are closed off to us, economically 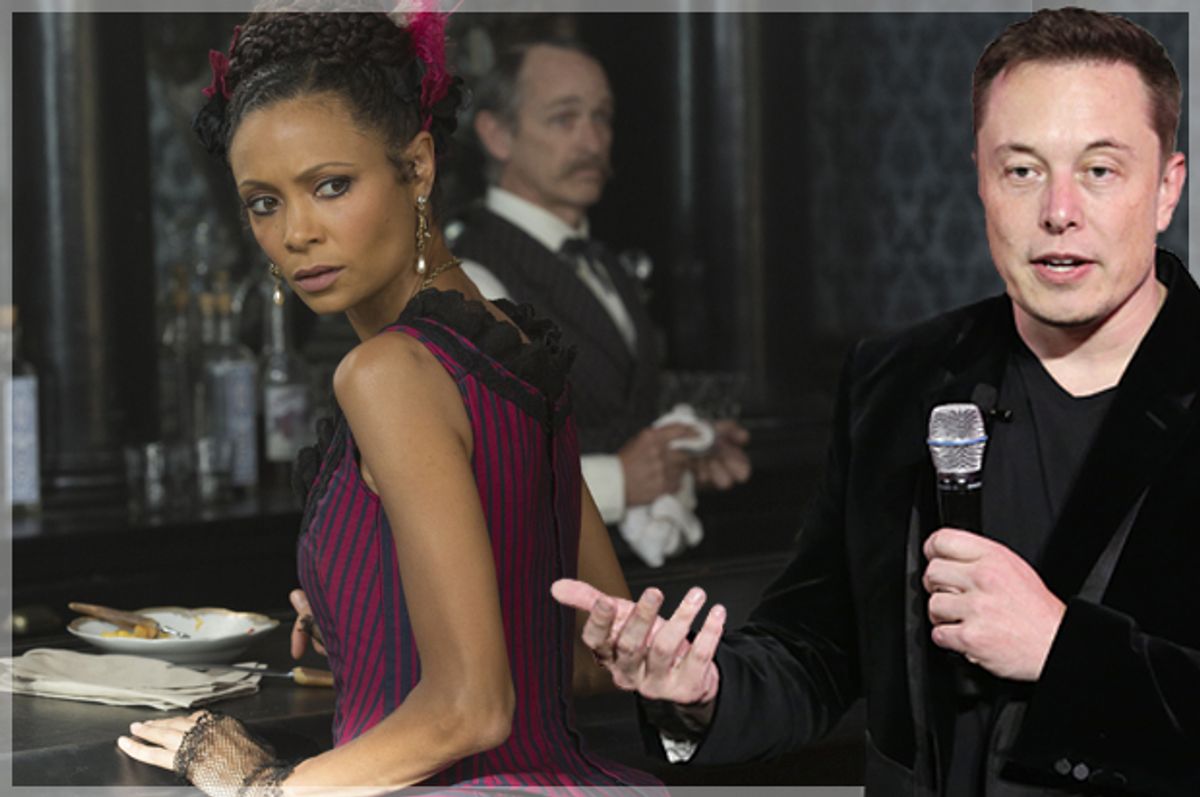 The more human a robot appears, the more uneasy it makes you feel. This principle, introduced by the Japanese roboticist Masahiro Mori in 1970 and known as the “uncanny valley,” applies to HBO’s “Westworld,” too. What at first seemed like just another premium cable prestige drama tricked out with the usual violence and toplessness has turned out to be an eerily accurate depiction of our own world.

In the show, the wealthy pay $40,000 a day to vacation in a vast theme park modeled on the 19th-century American West, while a small coterie of stressed-out corporate workers run the park. Both of these groups are dwarfed by a large and servile underclass, the park’s robot “hosts,” whom the affluent “newcomers” are allowed to rape and murder at whim.

Only the robots are in the dark about the park’s nature. As Dolores, the android girl next door (whom the more sadistic guests particularly enjoy ravishing), says in the first episode, “The newcomers are just looking for the same thing we are. A place to be free. To stake out our dreams. A place with unlimited possibilities.”

But the joke’s on her. Dolores’s faith in a just world and common interests isn’t just naïve; it’s ironic, the express result of her programming. The truth is that Dolores and her script-bound fellow robots are on a very short leash. They’re not even allowed to remember their own trauma. The newcomers alone are free, able to “live without limits” as the park’s ad slogan goes.

Okay, so you can see the twist coming. The robots are starting to wake up, and the usual slave-revolt analogy looks set to play out. In Michael Crichton’s original “Westworld” — he wrote and directed a film version in 1973 — the tourists get their comeuppance, bang bang, pow pow, much like in his later “Jurassic Park.”

Yet this TV version, created by husband-wife team Jonathan Nolan and Lisa Joy, has a special 2016 flavor. In their hands, “Westworld” is a drama about awakening or, in millennial speak, becoming “woke” — alive to social injustice and inequality. It’s not a coincidence that this narrative hasn’t dominated the conversation about the show yet. How you see the show depends on your own programming, and how aware you are of it. “Westworld” is a kind of litmus test for wokeness.

For me at least, the show has more in common with Occupy Wall Street, Black Lives Matter and Pantsuit Nation than any sci-fi classic. Imagine “Jurassic Park” told by the velociraptors, asking the question: Who the fuck cornered who? It’s a completely different story.

Likewise, when you think of the history of the American West, do you picture John Wayne saving ranch damsels and winning duels? Or do you think of the Native Americans, muscled out of their ancestral lands, set adrift for what may be unending estrangement from their own country? Do you see heroic and venturesome Marlboro men, or do you see, uh, everyone else?

I realize in writing this that I might be accused of dredging up history just so I can congratulate my peers and myself on our comparative enlightenment. But I think that including the marginalized in the larger story isn’t to take a reductive view, it’s to take a more expansive one. In other words, Nolan and Joy’s “Westworld” feels bigger and more fully imagined than the original, because it is.

More to the point, the show isn’t actually backward looking. Its setting — an artificial American frontier where the privileged act out elaborate cowboy fantasies, however dark — reads to me like a comment about what’s going on with the frontier in our own time.

It’s true our country’s western frontier closed in 1890. Until that time, as Frederick Jackson Turner wrote, American development had always taken shape around an expanding western frontier. His theory, essentially, was that the closing of the frontier meant we’d lost an important outlet for our striving and our discontent. Yet we could say that the moon landing in 1969 and the Internet boom of the ’90s have also represented frontiers.

Which is why “Westworld” stings so much and why its resemblances to our own world cause such discomfort. Like me, you’ve probably enjoyed your share of ultra-violent entertainment, from “The Walking Dead” to “Game of Thrones” and “The Hunger Games” films. Even so, “Westworld's” violence won’t sluice off you. “Turn it off. Ugh, this show is stressing me out,” my friend Scott groaned, after we’d watched the first two episodes. This is a guy who likes gory horror films like “Hostel” and “Saw”; he drew the line at “Westworld,” and not really because of the gore.

“Westworld’s" sham frontier vivifies the inequities we see in America in 2016, in which the democratizing hope of technology has been subsumed into an age-old hierarchy of class and capital, sorting us into haves and have-nots all over again. Your phone can open an app in a moment, yet social progress seems as slow as ever.

As of November 9, anyway, it seems the historically powerful are only becoming more powerful. As I write this at a Starbucks in Virginia, two older black women sitting near me are discussing Trump’s election as a possible sign of the end times. “Maybe we’re being held here in this place for a reason,” one said, her voice sad. “We know there’s redemption in suffering,” the other one responded. “It can be a great gift from Him.”

I can’t recall another election ever feeling so zero-sum, creating winners and losers with no in-between. Our nation’s common interests didn’t just disappear overnight, however. The moon landing and subsequent Apollo missions were a huge national project, representing “one small step for man, one giant leap for mankind,” as Neil Armstrong put it. Today, the most visible space program is Elon Musk’s SpaceX, a private venture.

The Internet frontier helped make Musk a billionaire. Now he’s looking to settle the Mars frontier, to make it a kind of intergalactic Cabo for his peers. His hope, he says, is to eventually bring the cost of a Mars trip from $10 billion down to around $200,000. Just as “Westworld’s" dazzling theme park, with its AI wonders, is prohibitively expensive for everyone but billionaires, at least in today’s money — at $40,000 a day, a two-week vacation would cost one person $560,000 before taxes — so is Musk’s Mars.

Granted, Musk is no Montgomery Burns, the cartoon tycoon villain of “The Simpsons.” His product-development model has long involved creating a luxury item that over time, de-featured, reaches the common people. Does that make you feel any better about being preemptively priced out of space travel, just like teachers have been priced out of San Francisco? That the once-collective dream of technology is creating more social stratification, not less? Me neither.

You don’t have to be a lefty to mourn these losses. In his moving memoir, “Hillbilly Elegy,” the conservative writer J.D. Vance writes about his family and community of origin among working-class people in the Rust Belt. “The space program, long a source of pride, had gone the way of the dodo,” he laments. “Nothing united us with the core of American society.”

When nothing unites us, and every hope is private, the existential stakes for most individuals will necessarily skew low. People assume that today’s young adults are disaffected and neurotic because they came of age in a dire recession, missing the real reason for the angst. What is our country working for, together? Space exploration? No. A world war, even? No again. Might as well spend the day messing around with Snapchat filters, then. Might as well move to Canada.

On “Westworld,” at least, we’ll see the inequities worked out. In our own world, I’m afraid, we’ll be waiting a lot longer.