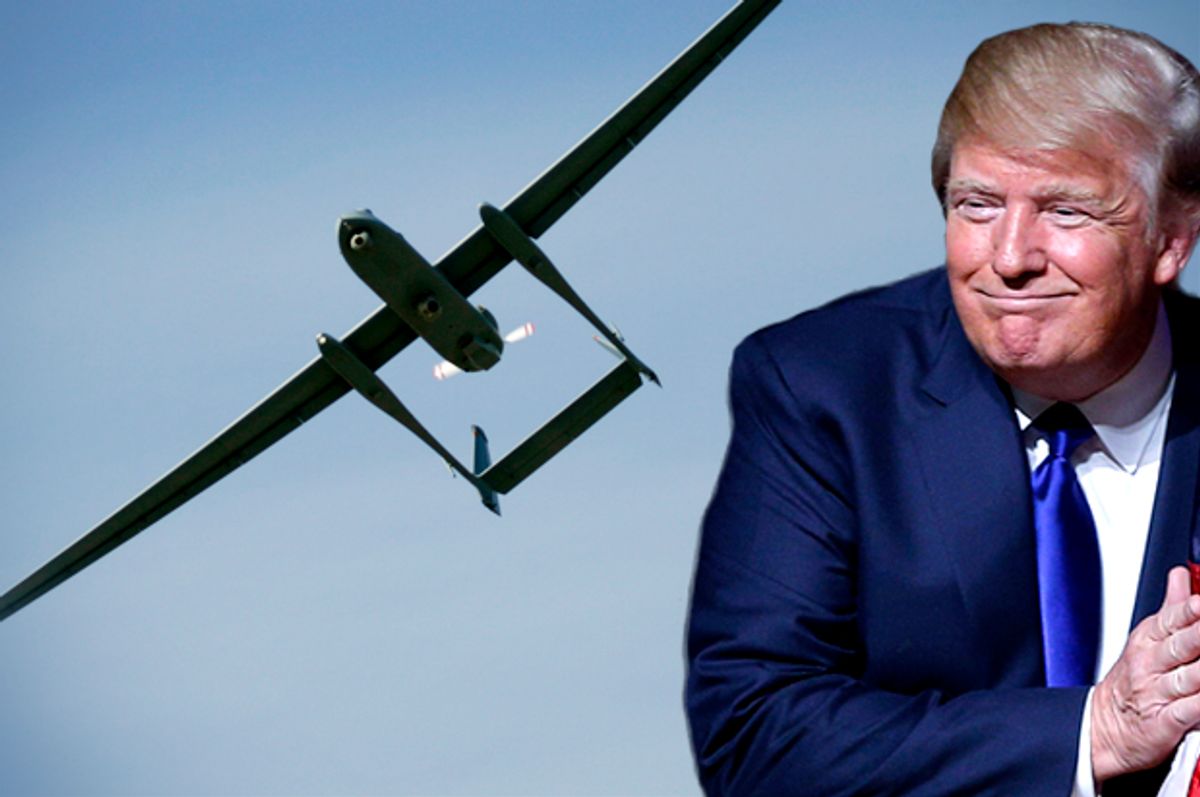 Barack Obama's left-wing critics have for years warned about the drone assassination and mass surveillance programs that the Democratic president had drastically expanded. They were met with bile and smears from a liberal establishment invested in shielding their leader from any criticisms.

Now, bigoted billionaire Donald Trump — the Republican demagogue who ran a far-right, overtly racist, misogynist and jingoist campaign — will be in control of the very same programs that establishment liberals were so eager to defend.

Under Obama, the use of targeted assassinations via drone grew enormously. The Democratic president carried out 10 times more drone strikes than his Republican predecessor, George W. Bush, killing thousands of people, including many civilians.

"Obama’s embrace and vast expansion of drone strikes against militants and terrorists will be an enduring foreign policy legacy," wrote Micah Zenko, a senior fellow at the Council on Foreign Relations, in The New York Times.

Even "more consequential than the growth in drone strikes," Zenko added, "is the Obama administration’s efforts to institutionalize and normalize the practice."

Obama set a dangerous precedent for future presidents: invoking the ability to assassinate anyone whom the government deems a threat anywhere in the world — without trial or any semblance of due process. This has included killings of U.S. citizens (a clear violation of their constitutional rights) and numerous covert drone attacks in nations with which the U.S. is not at war. Drone strikes are known to have been carried out in Iraq, Afghanistan, Syria, Libya, Pakistan, Somalia and Yemen.

Under President Obama, the public has come to accept this drone assassination program as inevitable, perhaps even desirable. A majority of Americans have consistently expressed support for the use of covert strikes to target extremists, and there has been no dearth of outspoken liberal drone defenders.

The drone program has not been carried out alone. President Obama has also expanded the surveillance state.

Whistleblower Edward Snowden exposed to the world just how much the National Security Agency's mass surveillance program had grown. His leaks showed that the NSA was not just sucking up information on millions of Americans’ private communications; it was also spying on dozens of other countries and even listening to the phone calls of foreign heads of state.

German Chancellor Angela Merkel — whose personal phone calls were monitored by the U.S. in what may have been a violation of international law — was so incensed that she compared the Obama administration's mass surveillance program to the work of the Stasi, the secret police of East Germany's former Communist regime.

Much of the U.S. intelligentsia, Republicans and Democrats alike, has demonized Snowden as a traitor. Some have even accused him of being a foreign agent.

President Obama responded to the growth in leaks during his administration by harshly cracking down. While pledging to reform the intelligence agencies and paying lip service to transparency, Obama has used the World War I-era Espionage Act against whistleblowers more than all previous presidential administrations combined.

Obama did not start the drone and mass surveillance programs; former president Bush made heavy use of both. But Obama expanded them, continuing where Bush left off and the bipartisan national-security consensus became further entrenched on this issue.

Given his authoritarian proclivities, it seems likely President-elect Trump will only expand them further.

"Remember how you legalized assassinating anyone, NSA mass spying, prosecuting publishers, CIA drones everywhere?" the whistleblowing organization WikiLeaks tweeted soon after the election. "It's all Trump's in 71 days."

WikiLeaks founder Julian Assange released a statement on Election Day warning that neither the Democratic nor the Republican presidential candidate would defend whistleblowers. Both ruling-class parties have happily joined in the bipartisan war on whistleblowers.

For the left, these have been hot-button issues for years. Leftists were viciously attacked by Democrats for daring to criticize Obama on drone warfare and the surveillance state.

Now some liberals are waking up to the fact that they helped create their own worst nightmare.

"He posed as a progressive and turned out to be counterfeit," West said about the "drone president" in a 2014 Salon interview. "We ended up with a Wall Street presidency, a drone presidency, a national security presidency," West added. "The torturers go free. The Wall Street executives go free. The war crimes in the Middle East, especially now in Gaza, the war criminals go free," said West, who was pilloried by the liberal establishment but spoke out for years, becoming a prominent supporter of Sen. Bernie Sanders’ presidential candidacy. And when Sanders dropped out of the race and campaigned for Democrat Hillary Clinton (whose views as secretary of state had been more hawkish than Obama’s), West endorsed Green Party candidate Jill Stein.

Many liberal pundits and journalists have remained staunch supporters of Obama and Clinton, however, and resisted such critiques. MSNBC's Joy-Ann Reid has embodied the liberal tendency to attack leftists who criticize the Democratic Party, snidely writing them off as "the Cult of Greenwald" — a reference to Pulitzer Prize-winning journalist Glenn Greenwald, who worked with Edward Snowden on his NSA leaks and someone whom Reid really does not like.

Journalist Adam Johnson has pointed out that Reid, who has a very mixed record on drone warfare and mass surveillance, is now suddenly very concerned with Trump's controlling the programs Obama expanded.

The same is true of much of the liberal wing of the commentariat. While interviewing Obama in October of this year, New York magazine's Jonathan Chait, a staunch defender of the Democratic president, noted, "When you hear critics on the left express what they don’t like about your presidency, the word drone might come up more than anything."

Obama replied that he was "glad the left pushes me on this" but claimed that "much of the time," left-wing critiques are not "fair or fully informed."

At the same time, Obama recognized that he has opened a Pandora's box of war. "It troubled me," he acknowledged to Chait "because I think you could see, over the horizon, a situation in which, without Congress showing much interest in restraining actions with authorizations that were written really broadly, you end up with a president who can carry on perpetual wars all over the world, and a lot of them covert, without any accountability or democratic debate."

Over the years Chait, an establishment liberal who attacked Sanders and his leftist supporters during the Democratic primaries, has been criticized for overlooking Obama's record on war and civil liberties. When Chait published in 2011 a 5,000-word screed in New York magazine to shield Obama from left-wing critiques, The Atlantic's Conor Friedersdorf called it "the quintessential example of the troubling phenomenon" of liberals "ignoring President Obama's failures on civil liberties, foreign policy, and the separation of powers." Wrote Friedersdorf: "Tellingly, as Chait writes for affluent urban liberals who railed against the Bush Administration's excesses in the War on Terrorism, he neither desires nor feels compelled to grapple with President Obama's approach to foreign policy, national security, or homeland security."

In his interview with Chait this past October and since then, Obama has claimed he has put reforms in place to try to limit this power. But, as The Intercept has pointed out, "the one existing transparency measure Obama touts as an example in the interview — the administration’s release of its tally on civilian casualties from drone strikes in Yemen, Pakistan, and Somalia — was viewed by many in the human rights community as a farce."

In a move that was supposed to demonstrate a commitment to transparency, the Obama administration released a report in July claiming that 64 to 116 civilians had been killed in its secretive drone program. Independent observers say the actual number is many times higher.

The Bureau of Investigative Journalism, which bases its research on reports by local and international journalists, nongovermental organization investigations, leaked government documents, court papers and field investigations, found that 380 to 801 civilians had been killed in U.S. drone strikes from 2009 to 2015. That's widely viewed as a conservative estimate.

Despite its ostensible professed commitment to transparency, the Obama administration did not state in its July report how it defined "combatant" and "civilian." As the New York Times has reported, "Obama embraced a disputed method for counting civilian casualties” that “in effect counts all military-age males in a strike zone as combatants, according to several administration officials, unless there is explicit intelligence posthumously proving them innocent.”

At least eight U.S. citizens have also been killed in Obama administration's covert drone war, although just one was purposefully targeted: Anwar al-Awlaki, a native of New Mexico who served as an imam at various American mosques and then became an Islamist extremist.

Al-Awlaki's 16-year-old son Abdulrahman was also killed in a U.S. drone strike in Yemen in 2011, along with his teenage cousin and at least five more civilians. Abdulrahman al-Awlaki, a U.S. citizen, had not been involved in any extremist activities. If his killing was intentional (and years of investigation by award-winning journalist Jeremy Scahill has suggested that it may have been), this was a war crime. Clinton inadvertently acknowledged this, in fact, in a campaign attack on Donald Trump.

Left-wing critics have repeatedly warned that Obama would be establishing a dangerous precedent for future presidents. As I wrote for Salon in May, "if a hypothetical President Trump insists the U.S. must extrajudicially assassinate dissidents, he has a drone program that can do so. President Obama will have established the precedent future commanders in chief will need to justify such actions." In June, I reiterated the same warning.

With Trump at the helm of U.S. empire, that hypothetical day is now here. As president, Trump will indeed control the drone assassination and mass surveillance programs that were drastically expanded by Obama, and liberals have no one to blame but themselves. They attacked the anti-war leftists who warned them again and again, while joining hands with Republicans in a bipartisan charade to bolster the national-security apparatus and the so-called War on Terror.