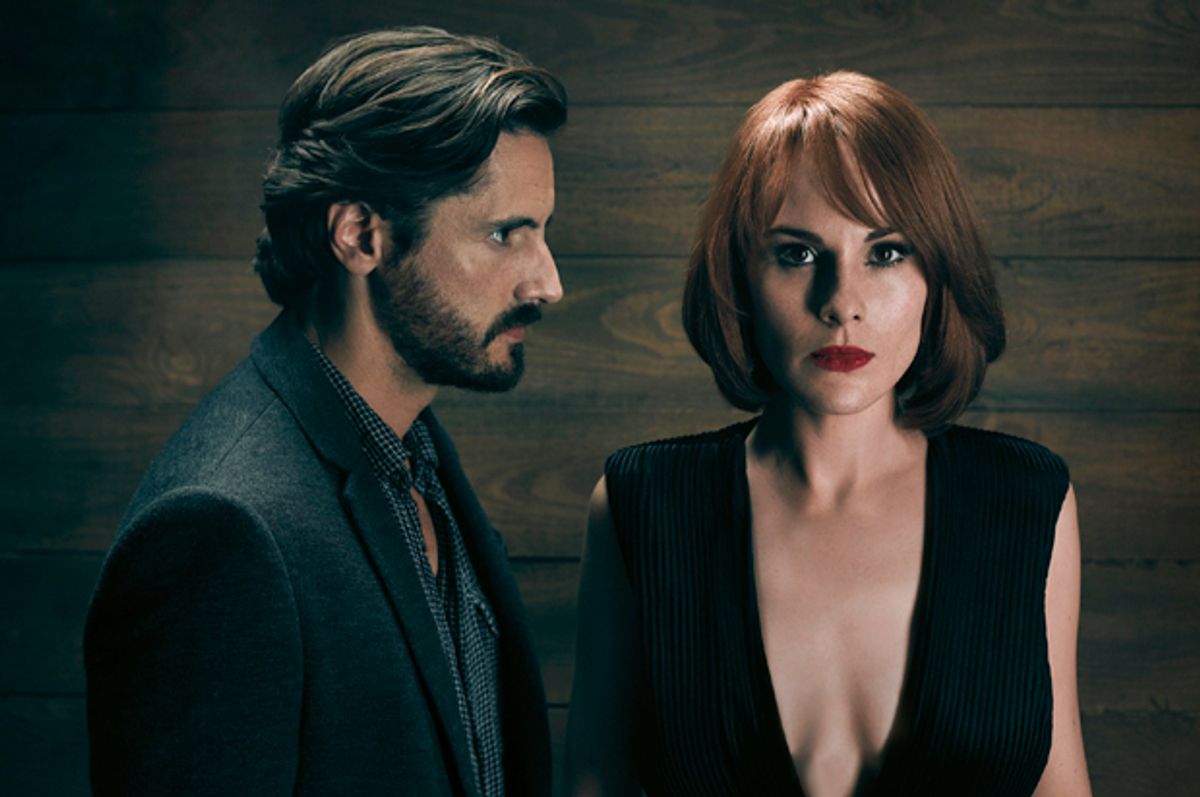 A game-changing plot point in the first season of “Downton Abbey” involved the upright and graceful Lady Mary Crawley succumbing to the romantic advances of Mr. Pamuk, a handsome Turkish diplomat. First he steals a kiss from Mary, then he sneaks into her bedroom and took her virginity. That single night of unwise passion haunts the family for years afterward thanks to Pamuk’s untimely death in Mary’s bed and steps taken by her mother and a loyal maid to cover up the incident.

Ostensibly this item of “Downton” trivia has little to do with TNT’s “Good Behavior” beyond a common connection through Michelle Dockery, whose starring role in the new cable drama represents a distinct effort to separate herself from Lady Mary, the character with whom she is most closely associated. Dockery’s Lady Mary is an icy patrician, a class-conscious beauty who reveals just enough vulnerability to keep her from being insufferable.

As Letty Raines, the anti-heroine of “Good Behavior” (which premieres with back-to-back episodes at 9 p.m. on Tuesday), Dockery is a hard-luck case: a thief, con artist and addict who recently has won early release from prison but can’t let go of her old ways.

Both of Dockery's characters get into trouble with one-night stands.

The world isn’t exactly rising up to meet this high-school dropout with a prison record. Her straight-world job prospects are grim, and in spite of the patient counsel given her by her parole officer Christian (Terry Kinney), there isn’t much evidence to let her know that anyone cares if she lives or dies. Her mother Estelle (Lusia Strus) is no prize herself, but she has written off her daughter and refuses to give her access to her 10-year-old son.

Besides, the criminal world is where Letty excels. Donning a wig, a designer gown and heels, Letty transforms herself from a poor grifter with a country accent into someone who could believably run in the same circles of as the Lady Marys of 2016. The disguise of privilege gains her access to the hotel rooms of affluent people, including that of a man who makes enough money to hire an Argentine assassin named Javier (Juan Diego Botto) to kill his wife.

Letty overhears the plot while hiding in the assassin’s hotel room, which forces her to confront a dilemma: Does she walk away with the $50,000 the professional killer has stashed in his room or does she warn the intended victim? You can easily guess which option she chooses. And you may also infer that it doesn’t go quite as planned.

If one thinks of Dockery as the lure bringing viewers to the door of “Good Behavior,” this incident is what leads them down the hallway to discover how convincingly the actress can portray a woman who does very bad things very well.

Indeed, this is the sexiest story of Stockholm syndrome you may ever see on basic cable, albeit chilled down by the knowledge that Javier kills people for a living.

“Good Behavior” is based on the Letty Dobesh character created by Blake Crouch, the author behind the “Wayward Pines” novels. Those familiar with Crouch’s work know his fondness for incorporating twists that land like haymakers, and so may already trust that he and fellow executive producer-showrunner Chad Hodge have held back a paradigm-shattering reveal for later in the story.

Viewers lacking such a foundation may take a little more convincing. And those who may have been initially hooked by Fox’s adaptation of “Wayward Pines” only to abandon it after the show couldn’t maintain its sense of intrigue would be right to meet “Good Behavior” with sharper doubts.

There’s also the question of Letty’s charisma. As much as the drama hangs on Letty’s internal struggles (of which we’re regularly reminded via regular interludes featuring her listening to self-help recordings), “Good Behavior” establishes fairly early on that any of her outward appearances of wanting to walk a straighter path are just that — appearances. She’s already broken bad. The question is whether her being left to her own devices is worse than her joining her fate with Javier’s.

Most of the future success of “Good Behavior” hinges on viewers investing in the relationship between Letty and Javier, whatever that shapes up to be. Dockery and Botto have heat to spare, and troubling as Letty and Javier’s partnership may be, the actors’ performances make us believe that the two have enough in common for the plot to evolve into a standout narrative. The three episodes provided to critics leave no clues about what that may be or which route the story could take. Hanging the tension of an entire episode on a dying Tesla battery — which is as exciting as it sounds — is a sign that the show’s creative navigational system may not be optimally calibrated.

Choosing to run the first two episodes back-to-back is an intelligent tactic on TNT’s part because within those opening hours are the ones most likely to seal the deal. Skilled directing by Charlotte Sieling makes the pilot crackle with sensuality and highlights Dockery’s versatility, although the adopted Southern twang she accompanies in the midst of a con wanders in and out like cellphone service on a back road.

But this is a forgivable blemish that doesn’t get in the way of Dockery’s skill with evoking a range of emotional shades we didn’t get to see in “Downton” days. When a viewer recalls that role, it’s especially refreshing to watch her let loose in Letty’s shoes while maintaining enough subtlety, even when she’s breaking apart, to lend her character poise in the most undignified situations.

American audiences are far less familiar with Botto, but he’s a supportive onscreen partner without fading away beside his better-known co-star. If the series’ writers persuade audiences that there’s something worth exploring in Javier’s relationship with Letty, Botto’s work will deserve a lot of the credit for making that argument successful, as will that of Kinney, who uses his overworked civil servant to give voice to frustration viewer may have with client.

“Good Behavior” is a dark, turbulent story and fits in with TNT's new scripted direction as ably as it finds success in busting Dockery out of her Victorian drag. Whether the drama develops into something worth revisiting week after week beyond her prickly sex appeal is questionable, especially after the third hour’s breakdown. With Dockery at the wheel, it’s at least worthy of a short test drive.