Leonard Cohen's impact: From the '60s to indie rockers and beyond

The late, great songwriter was admired by folkies, noise-rockers and multiple generations for his sardonic work 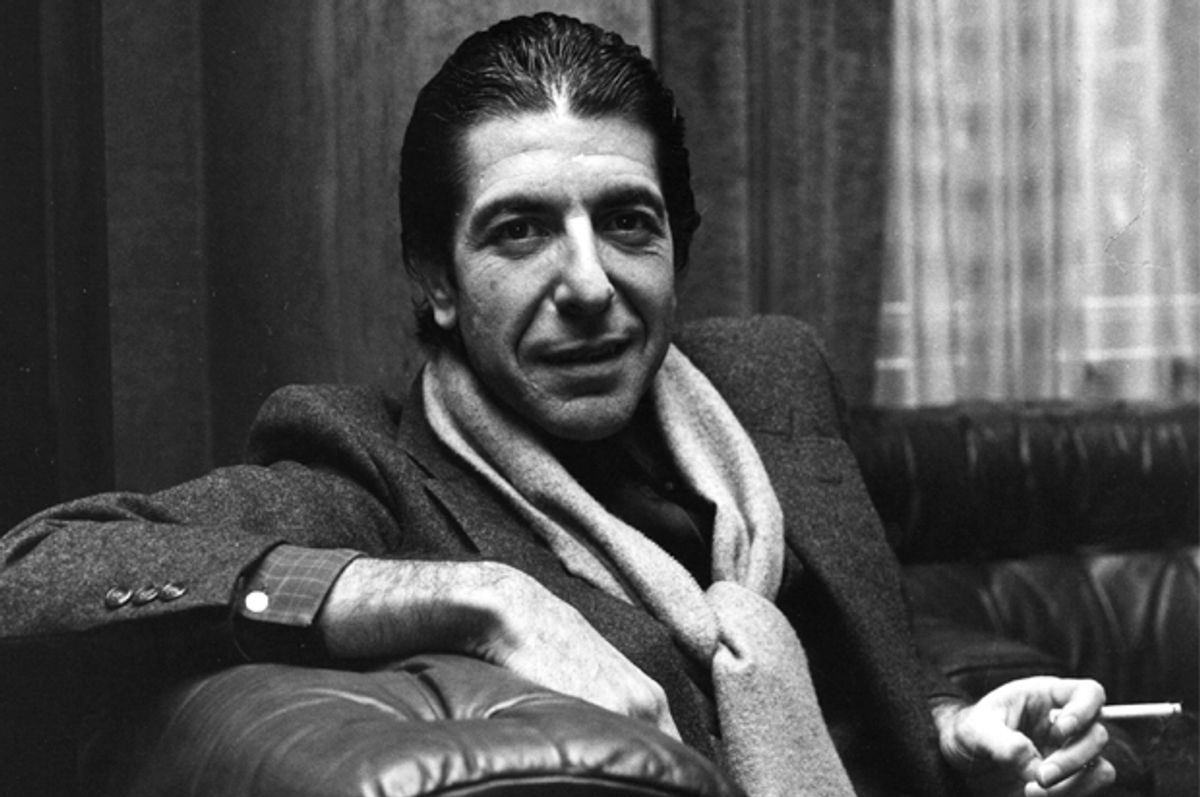 When Leonard Cohen died last week, at the age of 82, he became the latest in a cast of major figures — David Bowie, Prince and George Martin — who have made 2016 an annus horribilis for many music fans. Cohen never sold that many records, despite the recent ubiquity — in soundtracks or TV shows or high school glee clubs — of his song “Hallelujah.” But he provoked a deep love from listeners and exerted a powerful and wide-ranging influence on other musicians.

Appropriately, the impact of Cohen’s work predates his recording a single note of music. Judy Collins recorded “Suzanne,” his folk song about a deep but platonic relationship with a woman in Montreal, on her 1966 album. It took Cohen another year to record it for his debut, “Songs of Leonard Cohen,” a darkly luminous album from 1967.

Later that year, Collins asked Cohen, who saw himself as just a poet, and was ashamed of his voice and acoustic guitar skills, to play a fund-raiser with her. “He'd never sung [in front of a large audience] before then,” she told The Globe and Mail. “He got out on stage and started singing. Everybody was going crazy — they loved it. And he stopped about halfway through and walked off the stage. Everybody went nuts," Collins recalled. "They demanded that he come back. And I demanded; I said, ‘I'll go out with you.’ So we went out, and we sang it. And of course, that was the beginning.”

As shy and abashed as Cohen could be, other artists were finding his music and feeling much more enthusiastic about it. In London, where he was still unknown, a group of long-haired teenagers working to mix the style of Chuck Berry with centuries-old British ballads and Celtic reels, heard “Suzanne” and the crystalline “Bird on a Wire.” Fairport Convention’s electrified covers of these songs may have been the first in the U.K., where he would eventually become revered. “In Fairport, we just responded to the quality of his work,” Richard Thompson, the group’s former guitarist, told Salon via email. “He seemed to be writing as an adult, which wasn’t always a given in the '60s!”

And while the very best rock songwriters in the 1960s — Bob Dylan, The Beatles, The Stones, The Velvet Underground’s Lou Reed — were using irony and metaphor and other literary devices at a pretty high level, Cohen’s lyrics brought a new intensity and clarity to the field. “The idea of great songwriters as ‘poets’ is a cliché that gets tossed around all the time,” said Alan Light, the author of “The Holy and the Broken,” a book about the improbable success of “Hallelujah.”

“But here you’re dealing with an actual poet — and a writer with the sort of precision and control and mastery of language that is a different degree of difficulty than people who can just, you know, write great songs," Light said. "A lot of people found an ideal in that, but it didn’t mean they could go and do it.”

Cohen’s appeal, especially as time went on, had to do with his melodies as well: He was more than just a versifier who picked up a guitar, though he was that, too. In a New Yorker profile of Cohen that ran a few weeks before his death, Dylan himself broke down what made Cohen’s melodic lines so indelible. “Even the counterpoint lines — they give a celestial character and melodic lift to every one of his songs,” Dylan told David Remnick in a detailed assessment of Cohen’s style. “As far as I know, no one else comes close to this in modern music.”

Cohen, of course, was older than nearly all of the great figures in '60s music: He was born the year before Elvis and spent his early career as a writer of poetry and prose. His original plan was to move to Nashville, Tennessee— he was an admirer of the concision of the tradition that country songwriter Harlan Howard described as "three chords and the truth" — but he got caught up in the New York folk scene. Cohen loved the great poets. Some ideas of John Donne, like his tendency to rhapsodize about sex and spirituality at the same time, are central to Cohen's work. He remained a major fan of the more distilled style of Chuck Berry as well.

There was a hippie or folkie appeal to Cohen’s gentle, fingerpicked acoustic songs. But his music, especially the grim, sardonic, keyboard-driven songs that became more prominent in the '80s, put a stamp on musicians in alternative and indie-rock movements.

On Sunday night in Los Angeles, Car Seat Headrest’s 24-year-old lead singer, Will Toledo opened his set with the late artist's song “Field Commander Cohen” and called the Canadian poet his favorite songwriter of all time. (Toledo also sang a fragment of “Sweet Jane,” presumably in honor of Reed who died in 2013 and encored with Bowie’s apocalyptic “Five Years.”)

For Gen Xers — a group born into high divorce rates, frequent recessions, a sense of musical aftermath and a suspicion that the prosperity and confidence of the postwar boom would not last much longer — Cohen was a natural fit. In the early '90s, tribute albums and cover versions by much younger, off-the-mainstream musicians became frequent. Cohen became a kind of cool, older uncle who told Xers dark bedtime stories in an impassive baritone. They responded to songs that blended devotional seriousness with gallows humor and spiritual aspirations with sexuality.

The title of Cohen’s final album, “You Want it Darker,” could have come from an unreleased B-side from Xer heroes like The Smiths or Husker Dü. And it didn't hurt that, like Johnny Cash, another often-troubled major musician who became an Xer hero during his own Indian summer, Cohen was a cool, charismatic guy who wore a lot of black.

Nirvana’s Kurt Cobain was one of many indie rockers to fall for Cohen. On the band’s lovely and despairing 1993 song “Pennyroyal Tea,” Cobain sang “Give me a Leonard Cohen afterworld/ So I can sigh eternally.” (The song became a kind of anthem of Cobain’s suicide a year later, and Cohen said that he wished he had been able to meet the Nirvana frontman and talk him out of it.)

But while Nirvana was inspired by Cohen, the Seattle group didn’t sound terribly much like him. (He was covered by everyone from noise-rockers The Jesus and Mary Chain to ukelele virtuoso Jake Shimabukuro.) Other alt and indie artists — Nick Cave, Suzanne Vega, Tindersticks, PJ Harvey, Sparklehorse, Smog, Madeleine Peyroux, Jeff Buckley, Bright Eyes, perhaps even R.E.M. — have borne his mark more clearly. (In some cases, this resemblance includes a deep, deadpan male voice.)

Of musicians working today, the English-born, Western Massachusetts-dwelling singer-songwriter Lloyd Cole may be the most directly indebted to Cohen. His Cohen covers — like his bleak 1971 song “Famous Blue Raincoat,” for instance — are quite close to the originals, and his bittersweet body of work translates the Canadian’s virtues into a post-'60s, alt-rock style.

“If you want to write songs that are not throwaway songs,” Cole said via email, “then you should spend some time studying LC’s songs.” Cohen had a matchless attention to deal and an almost total allergy to lazy writing, Cole said, adding that “‘Famous Blue Raincoat’ doesn’t have a single imperfect syllable.”

Looking closely at Cohen’s songs, Cole said, made him a more taught, more rigorous songwriter. As for interpreting a song like “Raincoat,” he said, it didn’t take much. “I just do it straight,” Cole wrote. “I don’t add anything. It’s so strong it just needs singing.”

The problem with Cohen as an influence, of course, is that it’s not that tough to sing in a low voice or to combine sacred and profane imagery. But it is really hard to be brilliant and genuinely deep. As Light said, just because you admire it, doesn’t mean you can do it.

Cohen was a notoriously slow songwriter and talked about the pain and effort each song caused him. After 1992’s “The Future,” he didn’t release another album of new material until “Ten New Songs” in 2001. There was a similar gap between 2004’s “Dear Heather” and 2012’s “Old Ideas.”

This was not a guy who just churned it out. It may be why prose writers and intellectuals as different as Pico Iyer, Michael Ondaatje and Henry Louis Gates all admired Cohen: The good ones are all-too-familiar with how strenuous real thinking and writing usually are. He also inspired a kind of devotion in his friends.

"What people who saw him onstage might not have fathomed was that he was even more down-to-earth, humble and unimpressed by himself in real life, and even more committed to tending to everyone around him," Iyer shared via email. "The striking thing about him was that he never took short-cuts, in life or in art, and he gave himself with such amused seriousness to everything that mattered that others were inspired to attempt the same."

One of the great lost possibilities in contemporary music is that Cohen and Richard Thompson, who would have had a lot to say each other, never met. “I think one of Leonard’s abilities was to write deceptively simple songs,” Thompson said. “As a poet, he could save the complex stuff for a poem, and work the simpler ideas for song, whereas some of us try to shove too much into the song format. But they are deceptively simple — by his own account, worked over and over until they’re polished.”

It’s symbolic of his complicate talent that Cohen’s most famous song, “Hallelujah” — which will be hard to escape for the new few weeks — took him five years to write and first appeared on an album (“Various Positions”) rejected by his record company as being noncommercial.

One of Cohen’s best songs, despite its annoying, synthed-out production, is a number called “Tower of Song,” from 1988’s “I’m Your Man.” In it Cohen sings about a sort of musical monument where the greats dwell: Hank Williams, he tells us, is there. “Now I bid you farewell, I don't know when I'll be back,” he says near the end.

It's hard to figure out where Cohen — raised Jewish, steeped in Buddhist teachings and in some ways a questioning believer — imagined himself ending up after death. But the song may give us as good a hint as we'll ever get:

They’re moving us tomorrow to that tower down the track.

But you'll be hearing from me baby, long after I'm gone.

I'll be speaking to you sweetly

From a window in the Tower of Song