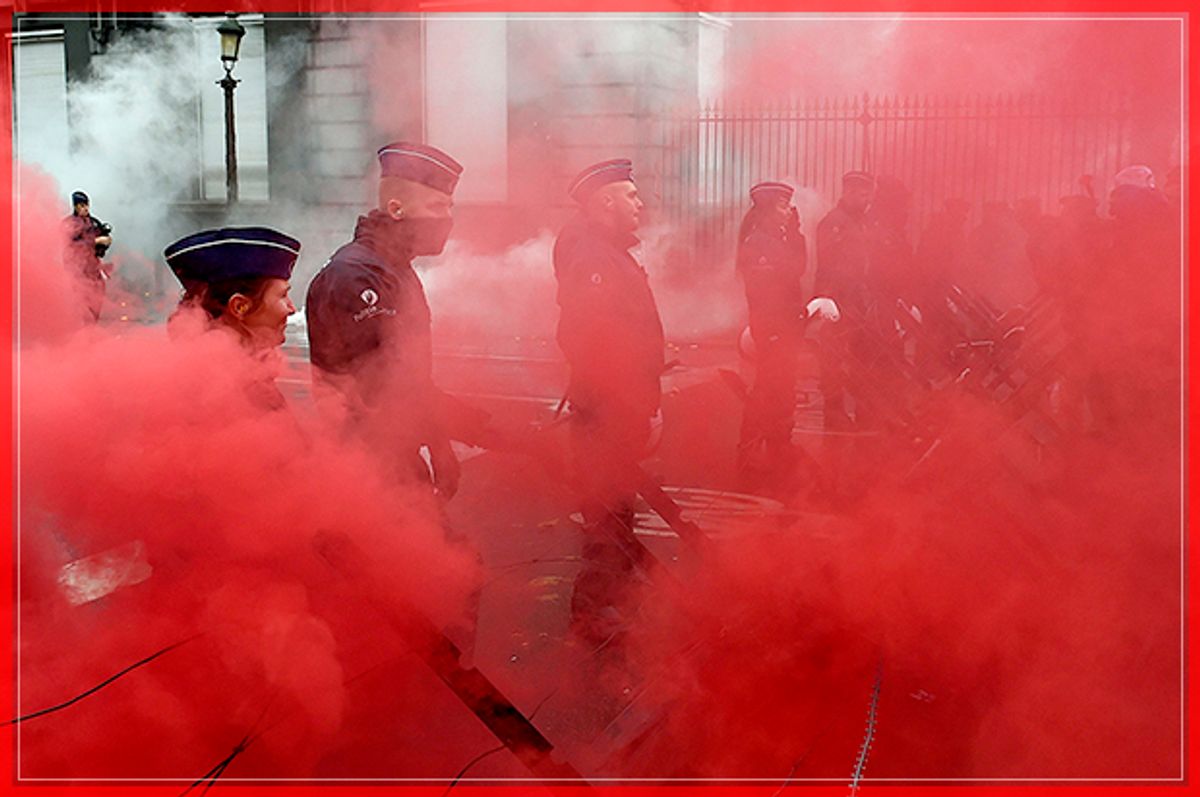 Belgian police officers stand guard amid red smoke after protesters threw coloured smoke grenades during a demonstration in Brussels organised by the Belgian military unions to protest against a decision by the government to raise the retirement age for soldiers to 63 on November 15, 2016. / AFP / JOHN THYS (Photo credit should read JOHN THYS/AFP/Getty Images) (Afp/getty Images)
-- Even under normal circumstances, crowd control is tough duty for any police officer to draw. But when the protesters are members of the Belgian military union and they bring their toys with them, it gets to be a real drag. Belgian police stand amid smoke grenades—red smoke often demarcates a hostile target—while union members oppose Belgian government’s decision to raise their retirement age to 63.

Athens, Greece   Yorgos Karahalis/AP
The moon rises behind the Propylaia at the Acropolis hill in Athens The supermoon will be shining brighter this week than it has in 69 years. It's exactly the kind of metaphor for hope that not only Americans, but the world needs right now-- a moon's light can guide us through darkness.

This image of the supermoon lighting up the pillars for the Acropolis in Athens reminds me of President Obama's press conference with Greek Prime Minister Alexis Tsipras this morning. The two met to talk about debt, but, of course, members of the press probed both leaders for comments on America's president-elect. Prime Minister Tsipras commented on the president-elect, "To be honest, I know very little of Donald Trump." The beautiful, mythical creature that is Big Bird left Sesame Street to visit Central Park! How lucky for us New Yorkers, who are still horribly depressed over Donald Trump's victory. Can we just nominate Big Bird as our next president? I guarantee he'll do a better job than Trump, and he'll be much less pompous about it. During a week of momentous events, Monday's arrival of a supermoon seems well-timed: After all, as this celestial body sneaks up closer to Earth than it's been for 68 years, it shines brighter and Lady Liberty in extra illumination serves as a powerful reminder.