Morning becomes electric: Can the Chevy Bolt wake the average American up to the advantages of electric cars?

Tesla may get all the buzz, but GM has the first electric car with a 200-mile range that costs less than $40K 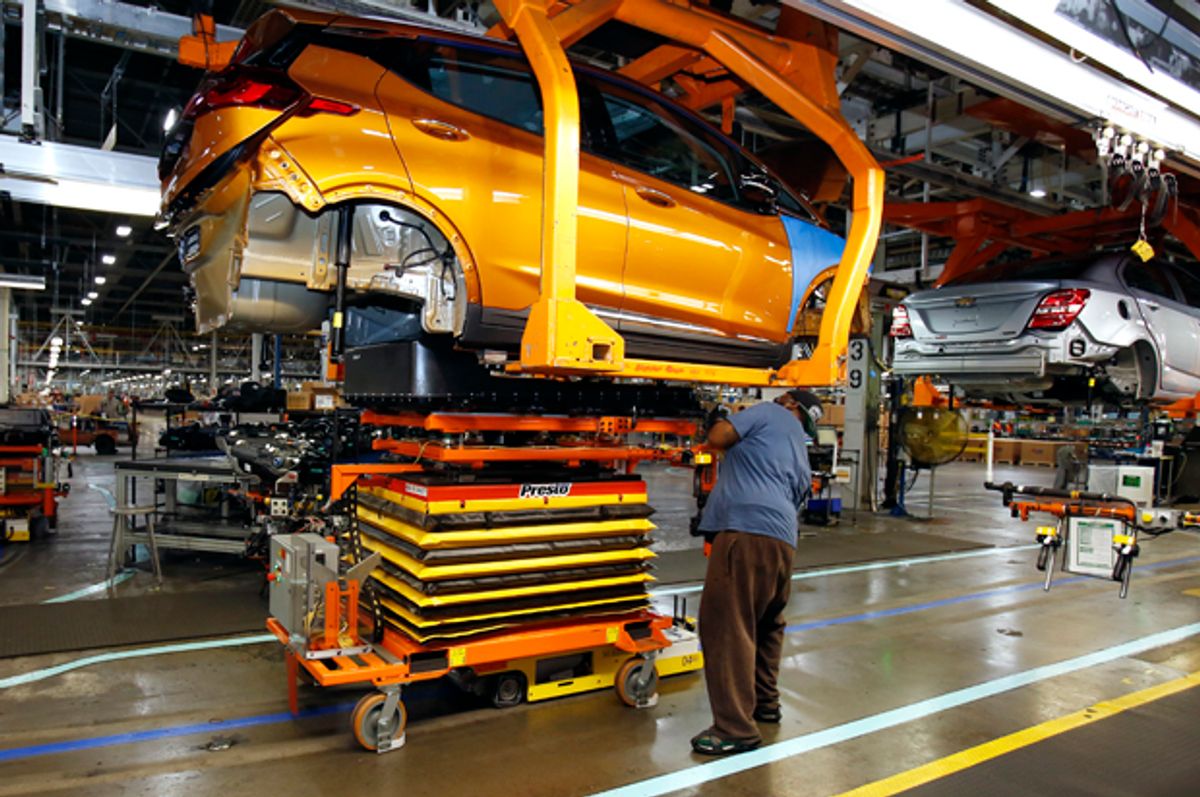 At a General Motors factory about 40 miles north of Detroit, workers recently began building two different cars on the same assembly line. Nestled between every fourth or fifth Chevrolet Sonic, GM’s peppy low-cost subcompact, is a 2017 Chevy Bolt, the first electric car to hit the market that delivers more than 200 miles of range for less than $40,000.

If all goes as planned, GM will begin delivering the Bolt to customers by the end of the year — assuming there are customers.

Though the electric car market has made immense strides in recent years, widespread electric car adoption has been elusive, especially among truck- and SUV-loving Americans. With electric cars' market penetration at near empty levels in most U.S. states, GM CEO Mary Barra is taking a judicious approach, building the Bolt on a Sonic platform in a shared assembly line to save costs. LG Chem, GM’s Korean battery supplier, recently estimated that the automaker would sell 30,000 Bolts next year. To put that into perspective, GM regularly sells more than 40,000 Silverado pickup trucks each month.

Meanwhile, Silicon Valley luxury electric carmaker Tesla Motors has said it plans to begin delivering its lower-priced Model 3 sedans by the end of next year as part of fulfilling its goal of making and selling half a million electric cars by the end of the decade. Unlike GM, Tesla is going full steam ahead, including undertaking a major overhaul of its Fremont, California-based factory and a $5 billion battery-production site east of Reno, Nevada, under partnership with Japan’s Panasonic. Tesla has amassed more than 400,000 preorders for the Model 3.

Clearly, the two companies are taking significantly different tacks. The Model 3 will be a make-or-break vehicle for Tesla. It’s the car that Elon Musk, Tesla's CEO and co-founder, launched the company 13 years ago to make — though beginning with a $100,000 luxury car to build interest from consumers and, more important, investors.

“The Bolt has a decent range, but the battery forces the seating compartment up a bit and then it takes up space where luggage would normally go,” O’Neill told Salon. “Because of that and because the engine is in the front, there’s virtually no capacity for carrying anything in this car if you have four adults seated in it.”

Though a production-ready version of the Tesla Model 3 has yet to be unveiled, O’Neill said, the unobtrusive profile of the Tesla battery pack, which rests flat beneath the passenger cabin, and the position of the Tesla’s electric motors will make the car a roomier ride for about the same price as the Bolt.

Whether GM’s Bolt takes off or not, industry watchers are bullish on electric cars. Nearly every automaker has committed to developing electric vehicles, along with autonomous driving cars and ride-sharing services, out of fear being left behind as the future of mobility rapidly evolves.

Sam Korus, industrial innovation analyst at New York-based investment services provider ARK Invest, has estimated that by 2022 it will be possible to purchase an electric car with at least 200 miles of range for less than price of a Toyota Camry today, or about $22,400. That’s almost half of the $42,000 for a BMW i3, which gets just 114 miles per charge.

Indeed, while a lot has been made about the environmental benefits of electric cars — especially as electrical power grids become less dependent on coal — ultimately wider adoption will come as the costs of operating electric cars falls below the price for comparable fuel burners.

And right now, the math isn’t there. O’Neill estimated that based on the cost of retail electricity at 25 cents per kilowatt hour (what homeowners in the Northeast pay), the Bolt costs more to operate than fuel-burning cars that top 42 miles per gallon, factoring in their higher cost of maintenance.

If it costs more to run an electric car than its gas-burning equivalent, are there enough Americans who care about the environment to pay more for electric vehicles? And if so, will these eco-conscious consumers buy an electric car from a company long known for  SUVs and pickup trucks? Will America ever embrace electric cars as long as gasoline prices are low?

There are a lot of unanswered questions about how electric cars would finally gain traction in the U.S. But at least for those thinking about going electric as more affordable and longer-range vehicles hit the market, there’s going to be a lot more of them to choose from in the coming years.