Paul Ryan has Medicare in the crosshairs: Ryan's been gunning to kill the program for years — and he senses his moment

Using the proposed repeal of Obamacare as bogus cover, Ryan is making a move to gut the immensely popular Medicare 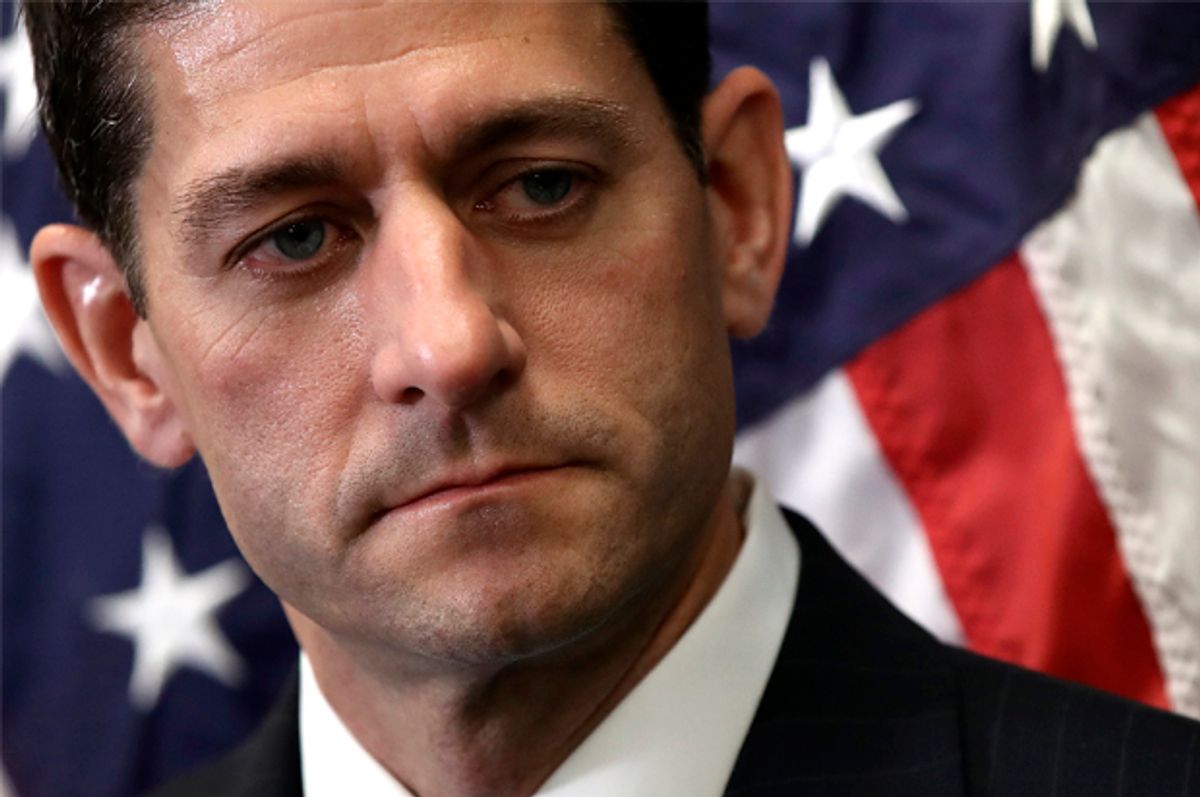 A week ago at this time, pundits were speculating that Paul Ryan had so alienated the right wing with his tepid support for soon-to-be-presidential-loser Donald Trump that he might not retain his job as speaker of the House when a new Congress is sworn in early next year.

Today, Ryan finds himself with a surprising opportunity to enact his long-held dream of shredding America’s social safety net like former National Security Council staffer Oliver North going after a filing cabinet full of Iran-contra documents. And first up on his chopping block is Medicare.

Ryan began laying the postelection groundwork for this big change on Thursday. Interviewed by Brett Baier on Fox News, Ryan tried to couch his plans for Medicare as a rational and necessary step in repealing Obamacare, saying the following:

This is, not to put too fine a point on it, a pack of lies. These statements are so untruthful that you would think a practicing Catholic like Ryan would be terrified to utter them out of fear of his tongue turning to ash.

Let us start with the obvious. No, Medicare is not going broke — not because of Obamacare and not for any other reason. Obamacare actually strengthened Medicare by helping to bring down the overall rate of health care inflation and increasing tax revenues going to the program.

Obamacare extended by 11 years the lifespan of the Medicare hospital trust fund, which gives Medicare the ability to pay 100 percent of the costs of its hospital insurance coverage, and will now not be exhausted until 2028. Other Medicare coverages such as prescription drug benefits and physician costs — Medicare Parts B and D — can’t go bankrupt due to their financing mechanisms, as the Center on Budget and Policy Priorities has explained.

That Obamacare would destroy Medicare was one of those boogeymen that Republicans pulled out in 2009 and 2010 to scare old people into calling their congressmen to block the passage of the Affordable Care Act. It has been knocked down time and time and time again, only to come back like a zombie lumbering the halls of the Capitol clutching a copy of “Atlas Shrugged.”

Ryan’s plan is to replace the totally-not-going-broke Medicare with what he calls “premium price supports.” This is fancy wonk-speak for “vouchers that would be used to buy private insurance but would not keep up with the cost of inflation, thereby saddling seniors with enormous additional health care expenses out of their own pockets.” Good luck stretching out those Social Security checks, folks! Assuming Ryan doesn’t gut that next.

Ryan has wanted to destroy Medicare for years, only to run into the little problem of it being an overwhelmingly popular program, even among the Republican base, which skews toward the elderly who rely on it for their spiraling health care bills. His plan, paired with huge tax cuts on the wealthy, sounded so nuts to a focus group convened by a Democratic super PAC in 2012 that its members simply refused to believe Ryan or any other politician was either crazy or heartless enough to really be proposing it.

And yet, he was. And he’s still at it, as anyone can see touting on his website his “A Better Way” legislative blueprint. He has simply been stymied from enacting the plan before now by circumstances such as a Democrat occupying the White House. But now that the GOP has that plus majorities in both houses of Congress, he seems to be gambling that he has a once-in-a-lifetime opportunity to pass this legislative wet dream.

It was the possibility that this opportunity would arise that explains Ryan’s refusal to denounce Trump during the campaign whenever the mango-colored menace went off on one of his fanciful vendettas or rants. Sure, Trump’s an authoritarian xenophobe and misogynist who has allegedly committed sexual assault, but Ryan has the chance to tear up cherished Great Society programs into confetti. You can’t put a price on that, not even your soul.

It is a sure bet that Ryan’s plan will come as a surprise to Trump’s voters, who heard nary a word about ending Medicare during the campaign. Which is why he’s couching it as part of repealing Obamacare. He’s likely hoping voters will not really notice. All he has to do is get it through the House as part of the long-promised Obamacare repeal, hope Majority Leader Mitch McConnell can get the bill through the Senate and then encourage Trump to sign it.

Which likely won’t be that hard. The president-elect has shown no aptitude or interest in policy details. If Ryan tells him the Medicare plan will do the exact opposite of what it really will accomplish, Trump will happily sign the measure — and then tweet about how awesome it is.

One hopes that this plan will go the way of George W. Bush’s idea to privatize Social Security after the 2004 election. Or that the usual legislative logrolling and stultified procedures of the Senate will allow Democrats to block it for eternity.

We are going to be asking a lot of the members of Senate minority in the coming years. But they may be all that stands between us and Paul Ryan’s Ayn Rand-inspired fever dreams.