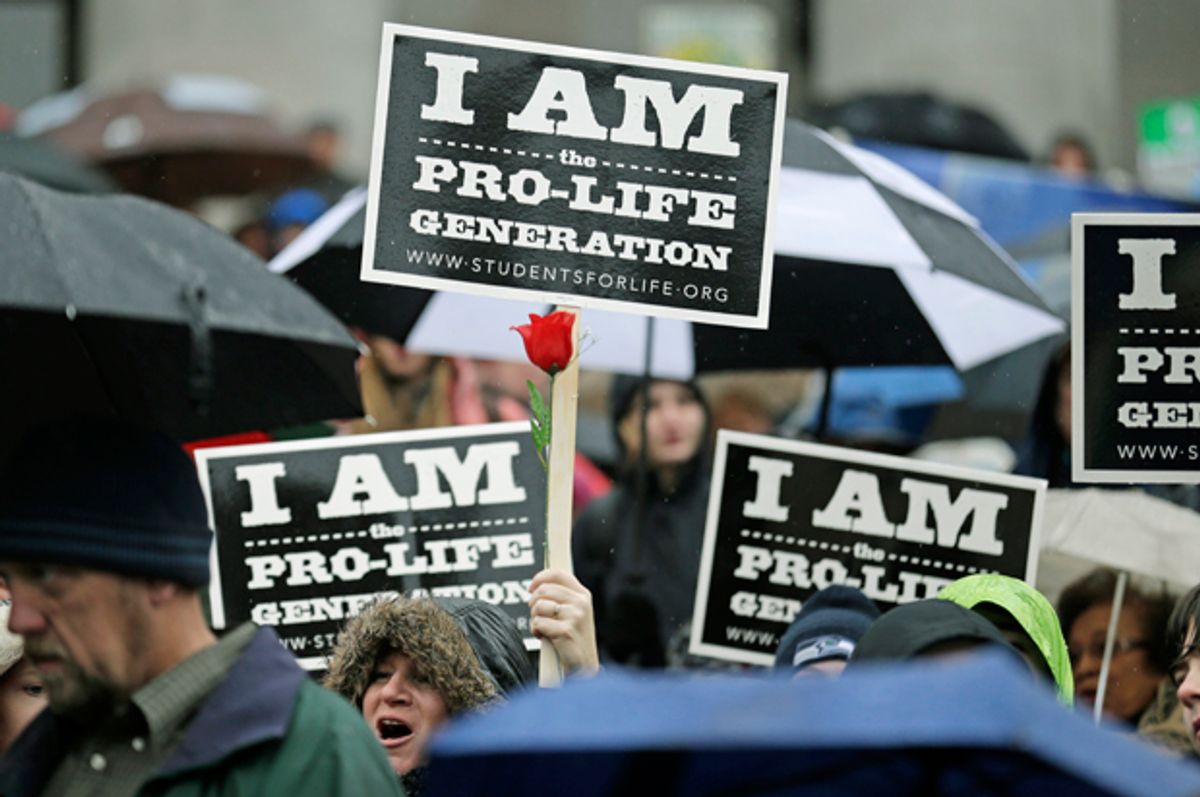 During his sit-down interview with "60 Minutes" broadcast on Sunday night, President-elect Donald Trump reiterated his intention to overturn Roe v. Wade, the 1973 Supreme Court decision that legalized abortion rights. The exchange between Trump and host Lesley Stahl is worth quoting at length:

Lesley Stahl: During the campaign, you said that you would appoint justices who were against abortion rights. Will you appoint — are you looking to appoint a justice who wants to overturn Roe v. Wade?

Donald Trump: So look, here’s what’s going to happen — I’m going to — I’m pro-life. The judges will be pro-life. They’ll be very —

Stahl: But what about overturning this law—

Stahl: Yeah, but then some women won’t be able to get an abortion?

Trump: No, it’ll go back to the states.

Trump: Yeah, well, they’ll perhaps have to go, they’ll have to go to another state.

It's true that if the Supreme Court simply reversed Roe v. Wade, that would, in fact, mean a divided nation. Many states, possibly most, would ban abortion, given that 32 state legislatures will be controlled by the Republicans in 2017, a number that is an all-time high. Abortion would become a luxury item: The women in Trump's life would be just fine, but working-class women in Texas would not be.

"We have seen how unconstitutional laws that force women to travel to other states for abortion care make this care essentially unobtainable, and it would be unconscionable to erect even more stringent barriers," Dr. Willie Parker, the board chair for Physicians for Reproductive Health, said in a statement. "President-elect Trump’s attack on fundamental rights is unacceptable."

But how much damage will Trump be able to do to this legal right?

Julie Rikelman, the litigation director for the Center for Reproductive Rights, said in a phone interview, “We should definitely be concerned because obviously there is a threat to women’s constitutional rights, but we at the center continue to believe that Roe v. Wade would not be overturned." Rikelman's organization, the Center for Reproductive Rights, led the successful legal challenge that resulted in this year's Whole Woman's Health v. Hellerstedt decision, which struck down a series of restrictive abortion laws in Texas.

Because of the legal principle called stare decisis, the court is reluctant to directly overturn precedent. The court's "own institutional integrity is at stake," Rikelman explained. If justices abandon that respect for precedent, this will undermine confidence in the court as an institution. A direct overturn of the Roe v. Wade decision, therefore, is unlikely.

But that doesn't mean that the anti-choice movement won't try to find some backdoor route to end, or at least severely reduce, access to legal abortion. Anti-choice strategists have known for a long time that lining up a conservative court to overturn Roe v. Wade was unlikely.

The Texas law that was struck down in Whole Women's Health v. Hellerstedt was an attempt to find just such a back door. That state law didn't ban abortion outright. Instead, Texas legislators passed a bunch of medically unnecessary restrictions that made provision of abortion services physically or financially impossible for most clinics, giving the court a chance to preserve the right to abortion as a legal concept, while severely limiting women's ability to exercise that right.

Trump will be able to appoint one Supreme Court justice immediately because of the unfilled vacancy left after the death of former justice Antonin Scalia and following the Republican-controlled Senate's refusal to vote on Merrick Garland, President Obama's appointee. Trump may well get a second vacancy on the court to fill during the next four years: Two current justices are in their 80s — Ruth Bader Ginsburg and Anthony Kennedy — and Stephen Breyer is 78.

So the chances are high that the court will soon have a majority of justices who would like to find backdoor ways to ban abortion. That's the bad news. The good news is that one of the best opportunities for anti-choicers to accomplish that has already been shut down.

“Whole Women’s Health was decided just a few months ago, and it set out a very clear legal standard that the courts need to follow to evaluate abortion restrictions," Rikelman said.

The court very clearly struck down "trumped-up red-tape restrictions that don’t actually do anything to further women’s health," Rikelman continued.

The anti-choice movement has put more than a decade's worth of strategizing and organizing work into its plot to end legal abortion through pointless red tape. If anti-choice activists choose to take another pass at this approach, they will have to come up with an entirely new line of legalistic bullshit to justify a whole separate set of regulations. And that is much easier said than done.

One possibility, of course, is trying to ban abortion by trying to write laws making embryos and even fertilized eggs legal "persons." But as Rikelman pointed out, that strategy has already been tried in the states and hasn't gotten far in court.

In 2013, for instance, North Dakota passed a law banning abortion after an embryo's heartbeat can be detected, which occurs at about six weeks of gestation. The problem is that most doctors won't even perform an abortion until a woman is five weeks along or further, for medical reasons. So the law narrowed the legal abortion range to a few days, if that —which for all intents and purposes represented a total ban.

That legalistic game playing was dramatic and clever but also transparent. Lower courts quickly threw the law out, and the Supreme Court then upheld that decision by refusing to hear the case.

So while President-elect Donald Trump can definitely do a lot of harm to abortion rights, he is likely to find that ending women's legal right to abortion won't be as simple as appointing a right-wing justice, or even two, to the Supreme Court. The anti-choice movement has exhausted most legal paths that could even potentially put this issue in front of the Supreme Court again. Right-wing strategists will have to come up with some entirely new approach, get it passed in a state and then a challenge could result in the issue's making its way through the judicial system all the way to the high court.

That could happen, make no mistake. But it's not quite time to panic. The anti-choice movement took its best shot before there was a President-elect Trump, and it's going to be a long time, if ever, before right-wing activists get another chance to eliminate the right to abortion.