In Donald Trump's America, fear, violence and intimidation are taking over college campuses

Vandalism and slurs have surged on college campuses, from "Trump!" graffiti to pushing a Muslim student down a hill 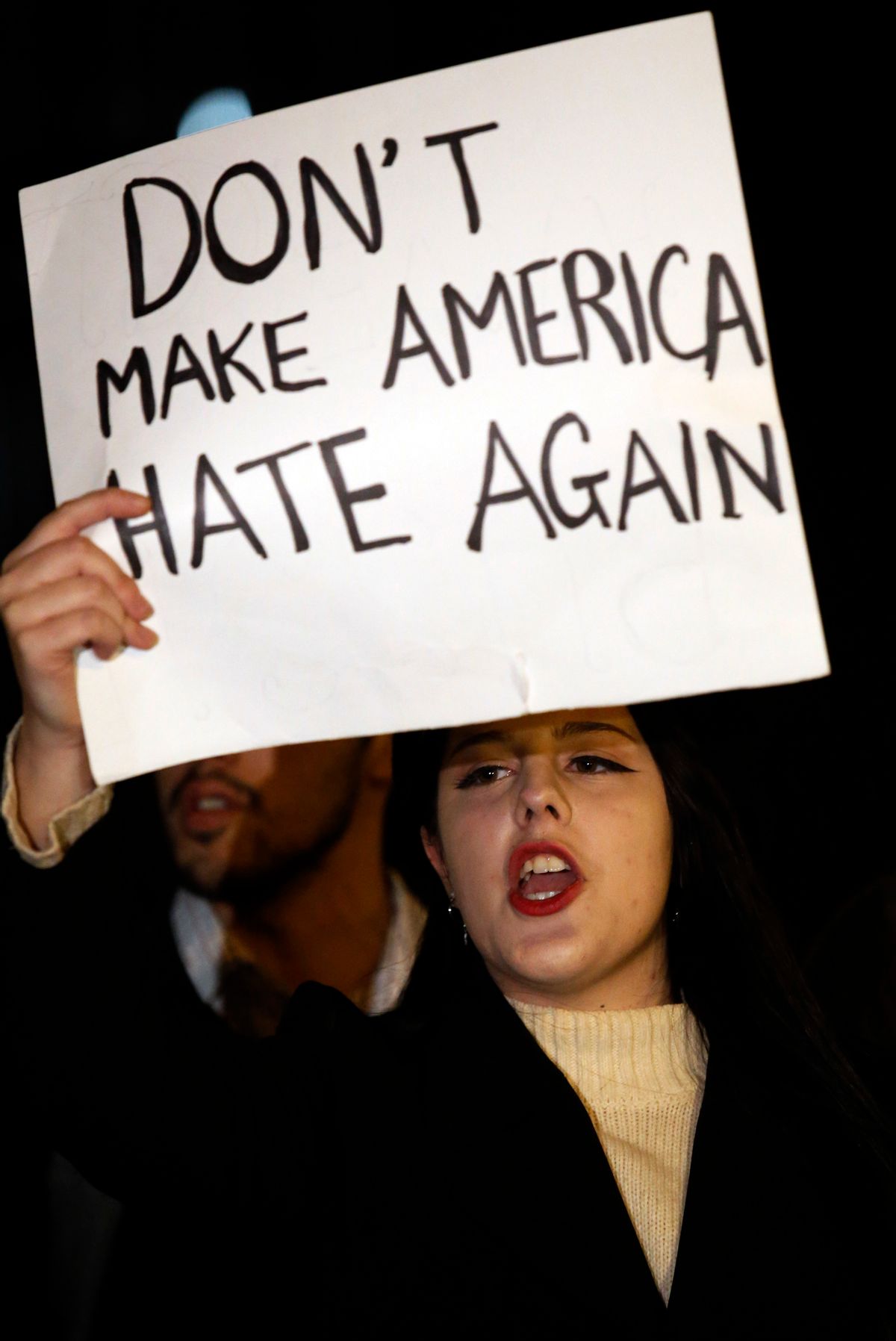 A protester holds a sign during a protest against the election of President-elect Donald Trump in Chicago, Thursday, Nov. 10, 2016. Two days after Trump's election as president, the divisions he exposed only showed signs of widening as many thousands of protesters flooded streets across the country to condemn him. (AP Photo/Nam Y. Huh) (AP)
--

More than a week after the 2016 presidential election, the media is beginning to let Donald Trump's presidential reality sink in. And while many university students have organized and protested against Trump's victory, vandalism, slurs, and violence have surged on American college campuses. They've ranged from defacing structures with "Trump!" graffiti to pushing a Muslim student down a hill.

Though Donald Trump told minorities, "Don't be afraid," and the aggressors, "stop it!" on "60 Minutes" Sunday, fear continues to be felt by the nation, and on college campuses across the country.

Two crime alerts classified as "Ethnic intimidation" were issued by the University of Michigan on Nov. 12 and Nov. 14.

The Nov. 12 update detailed an account from the Ann Arbor police that a student was approached by an drunk white guy between 20 and 30 with "bad body odor" and an "unkempt appearance." He reportedly told the student to remove her hijab or he would set her on fire with a lighter.

The Nov. 14 alert summarized another event: "A student pedestrian was approached by two men, who yelled at her about being in America, made reference to religion and then pushed her down a hill." Police are still investigating both of the occurrences at the University of Michigan. Hundreds of students gathered in support of the university's Muslim community Monday night.

Following the election results on Nov. 9, University of Michigan President Mark Schlissel wrote to students: "Our responsibility is to remain committed to education, discovery and intellectual honesty – and to diversity, equity and inclusion."

"Penn’s Counseling and Psychological Services office is doing outreach to impacted groups, seeing students at night, during the day, in the office, in other campus locations and at events," Ron Ozio, the media relations director for UPenn, told Salon in an email.

An Update to the Penn Community on Racist Messages Directed at Penn Students⠀
⠀
We wanted … https://t.co/PK8O10cb18 pic.twitter.com/FgLNZCNISj

On the morning after the election, a student at New York University’s Tandon School of Engineering found the word “Trump!” scrawled on the door of the Muslim prayer room. The Muslim Students Association posted bout the vandalism on their Facebook page. In response, student held a rally Thursday.

"Let today be the first of many that we rise boldly and unapologetically in the face of bigotry," the Muslim Students Association wrote in the Facebook post, "We are still here. We are not going anywhere."

"A lot of the students were very wary, very afraid because they’re from immigrant families so to have them come and see the name of an individual who is openly very Islamophobic and displays rhetoric that clearly isn’t supportive of immigrant families, that was very scary," Sumayya Vawda, a Muslim student at the NYU engineering school told Salon. At the University of Louisiana at Lafayette, The Vermillion tweeted out pictures in front of the Edith Garland Dupré library of phrases written in chalk that included "Trump," "Build Wall," and "NOW Free Speech is Everywhere ." One phrase even read, "FUCK YOUR SAFE SPACE." The graffiti was later removed with a pressure washer.

PRO-Trump chalk was littered in front of the EGD library last night. pic.twitter.com/fAmThGzr5Y

In a Nov. 9 statement to the students at the University of Rochester, President Joel Seligman had to remind the community that "It is important today to emphasize that all of our students, faculty, staff, and visitors are welcome and supported here. We do not discriminate on the basis of race, nationality, religion, sexual orientation, or any other basis." In the same message, Seligman also reminded students of the emotional support resources of the university.

The vandalism, slurs, and violence has not been limited to the college campuses listed above. A report by the Southern Poverty Law Center said that over 200 incidents of post-election "hateful intimidation and harassment" on social media as of last Friday.

Slurs, violence, and vandalism have also been displayed on high school campuses. A video from the New York Times showed college and high school reactions to the election results.