Vice President-elect Mike Pence is fighting to shield his emails from public view; experts say it's a bad idea 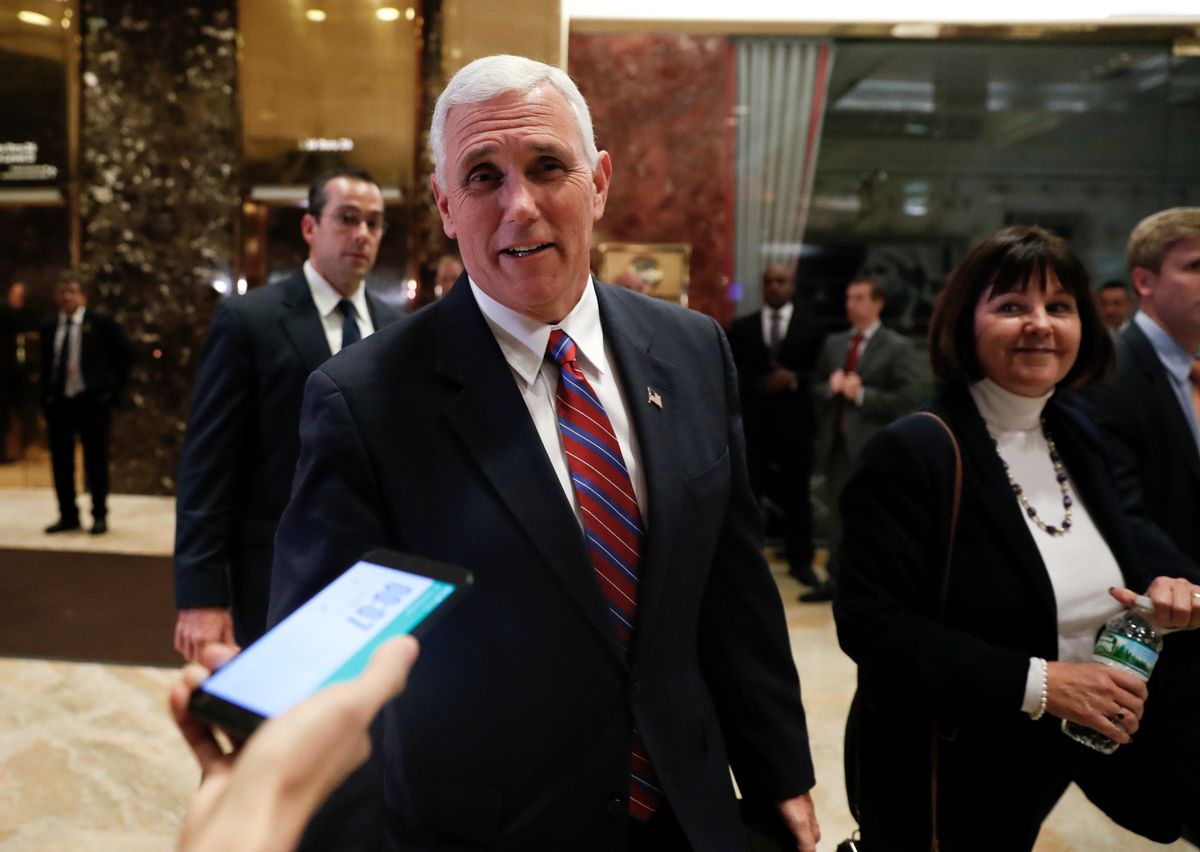 While he was running against the Democratic presidential ticket as Donald Trump's running mate, Indiana Gov. Mike Pence slammed Hillary Clinton's use of a private email server at the State Department as "the kind of double standard that the American people are weary of.”

"Give the people the facts, and the republic will be saved,” Pence said to MSNBC’s Chris Matthews, after James Comey, the FBI's director, announced the discovery of new emails days before the presidential election.

But less than a week after being elected alongside Trump in a stunning upset, Pence is the one being slammed for his own battle to keep his private emails private.

Pence’s Indiana gubernatorial administration is “fighting to conceal the contents of an email sent to Gov. Mike Pence by a political ally” that is “being sought by a prominent Democratic labor lawyer who says he wants to expose waste in the Republican administration,” the Indianapolis Star reported this week.

Democratic lawyer Bill Groth filed an open records request for documents relating to Pence's decision to sue the Obama administration over the president's executive action deferring the deportation of 4 million undocumented immigrants. Pence acquired outside legal counsel, instead of using Indiana's attorney general, to join 17 other Republican-led states in a 2014 suit. Groth told the Star he filed his request to find out how much Pence's unusual decision cost the taxpayers of the Hoosier State.

“I think joining the lawsuit without the attorney general and hiring that firm was a waste of taxpayer dollars,” Groth told the Star. “And the people have the right to know how much of their money was spent.”

While Groth received 57 pages of documents related to Pence's decision to join the lawsuit, the Star reported that Pence’s administration redacted the contents of a “position paper” sent to him by Daniel Hodge, the chief of staff for Texas Gov. Greg Abbott. It was Abbott's office that led the lawsuit against the Obama administration.

Groth sued to make the redacted portions of the email and all its attachments public. Pence's attorneys argued in April that the so-called white paper is not covered by Indiana’s Access to Public Records Act. An Indiana state court agreed after a court battle, arguing that it was not for its judges to decide whether to release the emails. The Star further noted:

Pence’s legal defense team claims the white paper is attorney work product protected by Indiana’s Access to Public Records Act — and at the end of the day, matters of public records are not for a court to decide.

"The plaintiff received the text of the email in one question. One email," said Matt Lloyd, Pence's deputy chief of staff. "The court reviewed the white paper and determined the state was correct in protecting it as attorney client privilege."

Now that Pence is set to become the country's vice president in January, Groth is appealing the ruling. The Indiana Court of Appeals will hear oral arguments in Indianapolis next week.

“I think governmental transparency is an important concern of anyone who lives in a democracy," Groth told the paper. "The governor cannot put himself above the law," he said.

"If the court buys their separation of powers argument, the executive branch will be exempt" from Indiana's public records law, Groth argued. "Why are they willing to take that risk if they have statutory arguments and they aren't really seeking to exempt the executive?"

Many legal experts agree with Groth.

"It comes down to this — the court is giving up its ability to check another branch of government, and that should worry people," Gerry Lanosga, an Indiana University professor specializing in public records law, told the Star.

"It shows no accountability," he continued, "that an agency can say things are exempt just because, and citizens have no recourse."

A former professor of state constitutional law at Indiana University's School of Law said that if the court rules in favor of Pence, "that would severely limit the Access to Public Records Act."

Paul Jefferson told the Star that Pence's lawsuit "will be interesting in part because it is hard to draw clean lines between what would be and what wouldn’t be excluded from a public records request if the court is going to exempt the executive branch from public records review."