My first week in Donald Trump's America: There's work to be done, but we gon' be alright

I met with grieving kids, went to a high-energy protest and (like the rest of us) blamed Trump for my own weakness 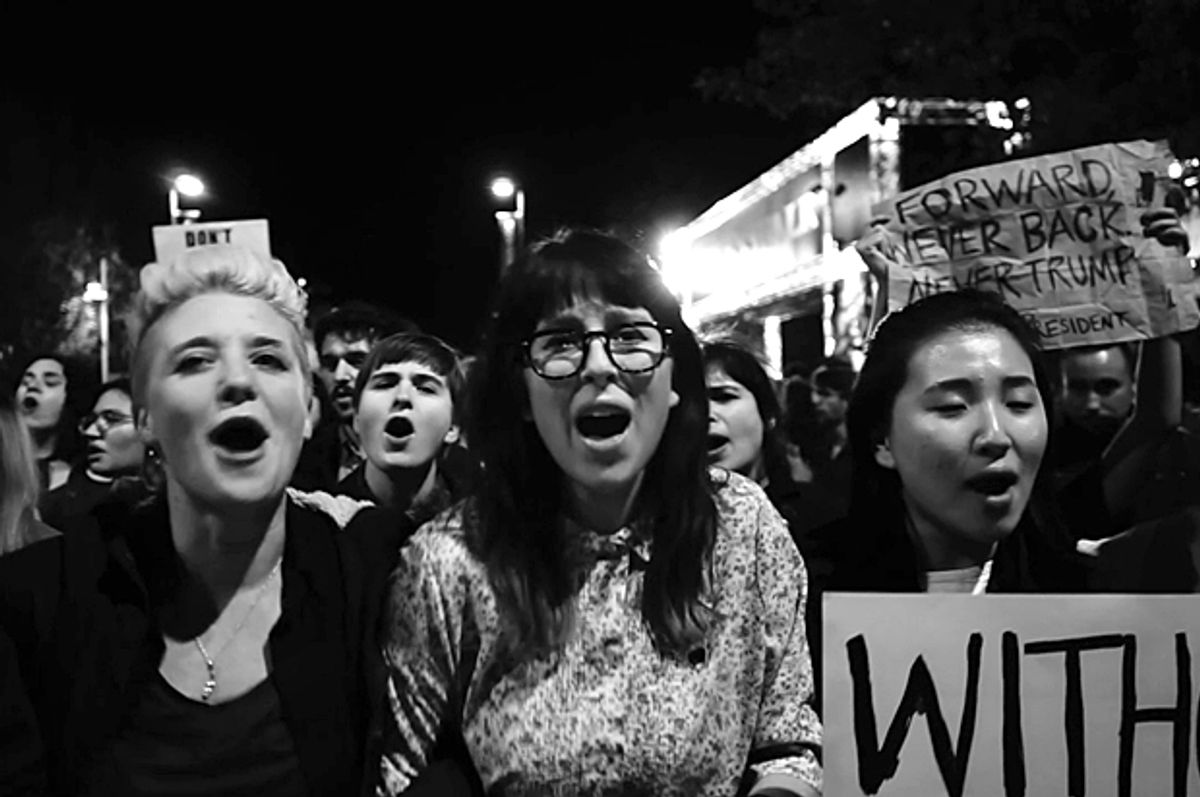 This is precisely the time when artists go to work. There is no time for despair, no place for self-pity, no need for silence, no room for fear. We speak, we write, we do language. That is how civilizations heal.

I know the world is bruised and bleeding, and though it is important not to ignore its pain, it is also critical to refuse to succumb to its malevolence. Like failure, chaos contains information that can lead to knowledge — even wisdom.
— Toni Morrison

Anti-Trump marches and rallies have broken out in multiple cities across the country every night since the 70-year-old billionaire defeated Hillary Clinton in last week's historic presidential election. Thousands have been uniting, with a shared since of outrage at our nation's choice: “F**k Trump!” has been a common chant shared among the diverse set of protesters in every city­.

Any and every kind of sign imaginable can be found at these demonstrations. The most creative one I saw read, “Maybe we should add pumpkin spice to racism so white women will care.” I only wish all this energy had been present when it was time to head to the polls.

For me, last Wednesday and Thursday were for drinking, political news, disbelief, drinking, harsh Clinton campaign critiques, leftist rants and then repeating all the above-mentioned activities.

I went back to work Friday. Here's how that went.

7 a.m.: My head pounded — not from last night's booze but from the idea of a sexual-assaulting, racist-like-Thomas Jefferson buffoon being elected to the highest office in 2016, which makes me feel like nothing has really changed since 1801.

Three Excedrin, two cups of coffee and one long shower erased the headache — giving me enough energy to address a group of eighth-graders.

9 a.m.: Early as always, I sat in my car about a block away from the middle school — responding to tweets and emails, telling my friends to keep their heads up, stay positive and remember that we’ll be OK, while simultaneously telling myself the same thing. A group text from an unknown number interrupted one of my replies. It featured that Toni Morrison quote that you can find at the top of this column.

The students clapped, smiling as I walked through the crowd slapping them high fives and handing out fist bumps. I try to make it to as many inner-city public schools as I can in an effort promote literacy and share the power of education.

“Hey, so how many of you guys are going to college?” Some hands went up — most of the room. “Let’s talk about what it takes to graduate!”

I start babbling about my first day of college back in the Stone Age, and almost every hand went up before I even got to the good part. “They are so anxious!” the teacher said. I agreed and just started taking questions.

I pointed to a round-faced young lady with two long ponytails. “Mr. Watkins, my mom cried on election night and all day the next morning. Do you think Donald Trump will ruin America?”

“Absolutely not. We are going to be all right! Just like that Kendrick song!” I replied. Her question was followed by similar responses from the bulk of students in the class. They were worried — as aware as they were young. They spoke like little brokenhearted MSNBC pundits. They took the loss as rough as the adults who may soon be stripped of everything from jobs and health care to citizenship.

Then I gave them a brief history lesson on the resiliency of our ancestors and the multiple eras of oppression from slavery to Jim Crow and mass incarceration to multiple police murders. I told them that African-Americans — their ancestors — had survived in this country and that their very existence is a testament to that power. I explained to them how Trump is only a small thing, a mole on the body of white supremacy. If  we can beat the collection of racist systems and leaders that came prior to his rise, then he’ll go down, too — because love conquers all and we are an indestructible people.

I closed by reading that Toni Morrison quote aloud and then challenging the students to vote when they came of age. Their faces glowed. They were so pumped to vote, urgent even: Imagine 13-year-olds in line five years early, already understanding how important suffrage is. I left motivated­­, inspired by them and ready to imagine what this Trump presidency is really going to look like and my role as a constant advocate for change.

2:30 p.m.: I pulled up early for my 3 o’clock so I whipped my phone out and started scrolling again, this time through the pictures I took with the eighth-graders­­ — looking for a cool one to post on Twitter along with a message of hope. I opened the app and saw countless acts of hate: students being called the N-word on college campuses, racist graffiti popping up everywhere and screenshots of tweets praising white dominance, threatening Mexicans and attacking Muslims.

3:15 p.m.: I leaned against the wall in my office while one of my more ambitious and politically active students paced back and forth, still in shock and utter disbelief. “Professor Watkins, I don’t know if I should bust one of these Trump racist f**kers in the head or just move to another country!” he yelled while smashing his fist into his palm. “Agggghhhh!”

His eyes popped, beads of sweat made a crown that wrapped his forehead and hairline. “You look like Drake, so I know you aren’t going to punch anyone,” I said, pulling up a chair for him. “You have a bright future. And what about Frederick Douglass’ 'great tradition'? This is our land, too; we built this country. I understand if you want to move outside America for new experiences. But don’t let these brain-dead racists run you out.”

I showed him some photos of the students I meet earlier and shared that Morrison quote again.

5:30 p.m.: I’m out in the streets, thinking of the ways I can use Donald Trump's election to get out of things that I don’t want to do and as an excuse for the bad things I want to do.

“Yes, unfortunately. I was clean for months,” I responded. “But this damn election — Trump made me smoke.”

7 p.m.: The protests made it to Baltimore. (Photographer Shan Wallace shot the video, below, for Salon.) Police sent out warnings as huge groups gathered, and all races, all genders, all ages and all income levels were included. Again “F**k Trump!” and “Never Trump!” were the themes. Even though the anger in the air was thick enough to bag up and sell­­, I felt like we were one step closer to unity. I can only hope those protesters remember this moment four years from now.

Thankfully, we made it past the first week. Trump appointed Steve Bannon, a person who many have called a heartless racist, as his White House strategist. Trump flirted with the idea of his kids getting security clearance and he boasted on Twitter about his victory, like a 2-year-old with a smartphone. Yet, the Earth still spins. We are still here.

As a black person, I will still be subjected to racism and dealing with the same BS, just as I did under Barack Obama and just as I probably would have if Hillary had won. But I’m worried about my white liberal friends and would like to send out a special message to them: Be careful!

I saw video today of a white anti-Trump liberal being tackled like an extra from that Adam Sandler movie "The Waterboy." Apparently, Trump supporters hate white liberals as much as they hate us black people. In preparation for the next four years, let me recommend that you switch to the Birkenstocks with straps, over the signature slide-ons we know you’ve come to love. It's almost impossible to run or fight in those slide-ons, and you may have to do both as we wait for this nightmare to end.

Until then, we must go to work, as Toni Morrison says. We must continue to be truth tellers. We don’t have time to mourn; there's too much work to be done.