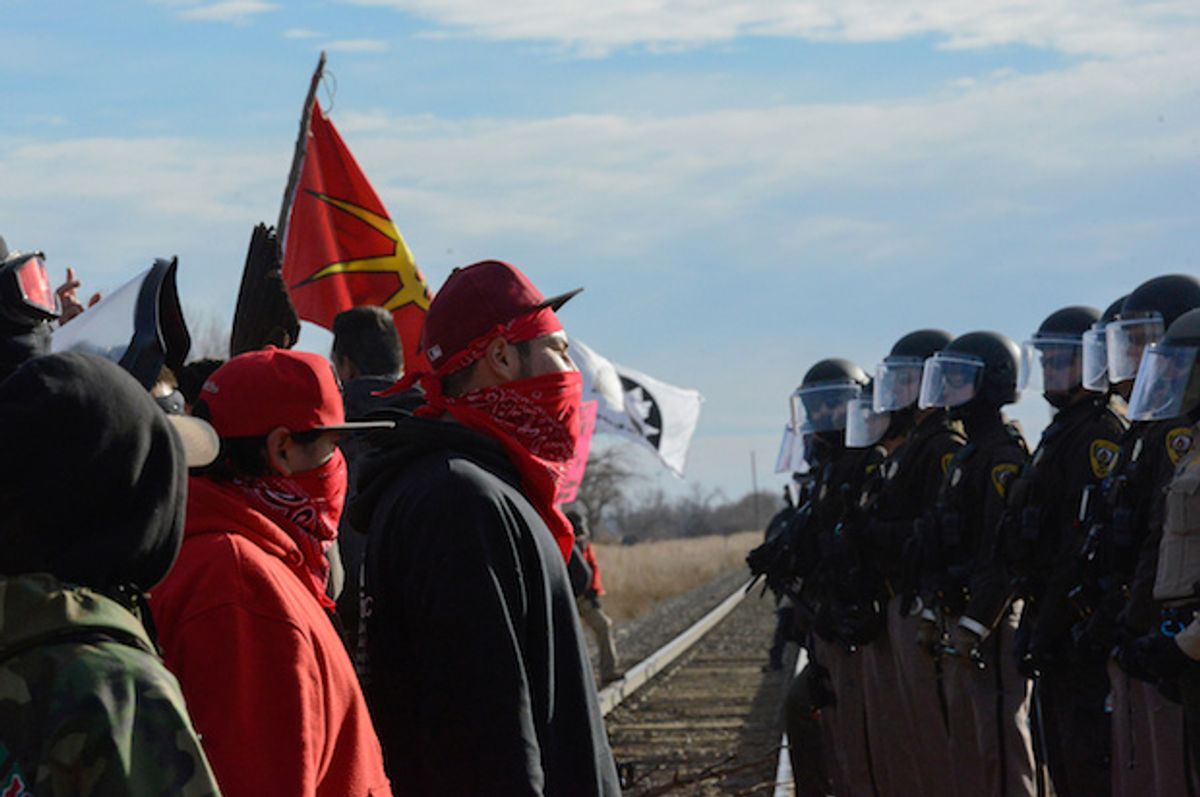 United Nations experts have called for a halt in construction of the Dakota Access pipeline, arguing it could threaten the health and well-being of Native Americans.

Maina Kiai, the U.N. special rapporteur on the rights to freedom of peaceful assembly and association, released a statement on Tuesday calling on the pipeline company Energy Transfer Partners "to pause all construction activity within 20 miles east and west of Lake Oahe."

For months, indigenous groups living near Lake Oahe in North Dakota, and activists from around the country who have joined them in solidarity, have held protests against the proposed $3.8 billion pipeline, which would transfer oil across nearly 1,200 miles, from North Dakota south to Illinois.

Authorities have used harsh measures to suppress protests, including rubber bullets, bean-bag rounds, tear gas, compression grenades and mace. Hundreds of people have been arrested in protests, which employ the hashtag #NoDAPL.

“This is a troubling response to people who are taking action to protect natural resources and ancestral territory in the face of profit-seeking activity,” Kiai said in his statement, which was issued by the Office of the U.N. High Commissioner for Human Rights and was endorsed by several other U.N. experts.

At least 400 activists have been detained and often have been held in “inhuman and degrading conditions in detention,” Kiai added. Some indigenous protesters have said they were treated like animals and even held in dog kennels.

"Marking people with numbers and detaining them in overcrowded cages, on the bare concrete floor, without being provided with medical care, amounts to inhuman and degrading treatment," the U.N. expert said.

“The excessive use of State security apparatus to suppress protest against corporate activities that are alleged to violate human rights is wrong," he continued, noting that it violates U.N. guidelines on business and human rights.

Amnesty International USA, which has repeatedly criticized authorities for not respecting the rights of protesters, issued another statement on Tuesday noting that U.S. authorities had put up roadblocks to prevent journalists and human rights observers from documenting the protests and the official response.

The human rights group noted that shortly after it released a separate statement calling on police to respect the right to peaceful demonstration, observers reported roadblocks at several access points to the protest sites.

"Police have told our observers that nobody — including journalists, and legal and human rights observers — can pass," Amnesty International USA said. "With unconfirmed reports of force being used on social media, it is imperative that access be granted to document actions by both police and protesters."

The rights group sent a letter to authorities, one of several it has written in recent months.

The Standing Rock Sioux Tribe, which has led protests against the pipeline, has warned that the Dakota Access pipeline will likely pollute its water and land. The project, if completed, would transfer roughly 470,000 barrels of crude oil a day across four states.

Energy Transfer, the Texas-based Fortune 500 company behind the pipeline, has insisted that it will continue construction, even after federal authorities called for a temporary voluntary delay.

This is not the first time a U.N. expert has called on Energy Transfer to cease construction in the area that could endanger the health of the Standing Rock Sioux Tribe and those who rely on its water source. In September, Victoria Tauli-Corpuz, the U.N. special rapporteur on the rights of indigenous peoples, called on U.S. authorities to halt the pipeline construction, in another statement issued by the Office of the United Nations High Commissioner for Human Rights.

“The tribe was denied access to information and excluded from consultations at the planning stage of the project and environmental assessments failed to disclose the presence and proximity of the Standing Rock Sioux Reservation,” the U.N. expert emphasized in her statement.

Tauli-Corpuz noted that the U.S. is committed to implement the U.N. declaration on the rights on indigenous peoples. She called on the U.S. government to "fully protect and facilitate the right to freedom of peaceful assembly of indigenous peoples" and "undertake a thorough review of its compliance with international standards regarding the obligation to consult with indigenous peoples and obtain their free and informed consent."

Tens of thousands of protesters throughout the world held demonstrations on Tuesday in solidarity with the Standing Rock Sioux Tribe. Activists from more than 100 cities spoke out in support of environmental justice and indigenous rights. In Washington, protesters held a sit-in outside the headquarters of the U.S. Army Corps of Engineers, which had originally approved the pipeline construction.

In North Dakota, the protests have continued to grow, despite the violent backlash. “People feel that their concerns are being ignored, and it is their right to stage peaceful assemblies so that these concerns can be heard," Maina Kiai said in his statement issued on Tuesday.

Even if some protesters engage in acts of violence, he noted, activists still have the right to demonstrate. “The right to freedom of peaceful assembly is an individual right, and it cannot be taken away indiscriminately or en masse due to the violent actions of a few,” Kiai explained. “The use of violence by some protesters should not be used as a justification to nullify the peaceful assembly rights of everyone else.”

"The authorities have an obligation to actively protect that right. The rights of cultural heritage defenders have to be respected and protected," the U.N. expert stressed.