The encyclopedic, possibly archivistic, verges on gloriously fetishistic in this Crowded House compendium 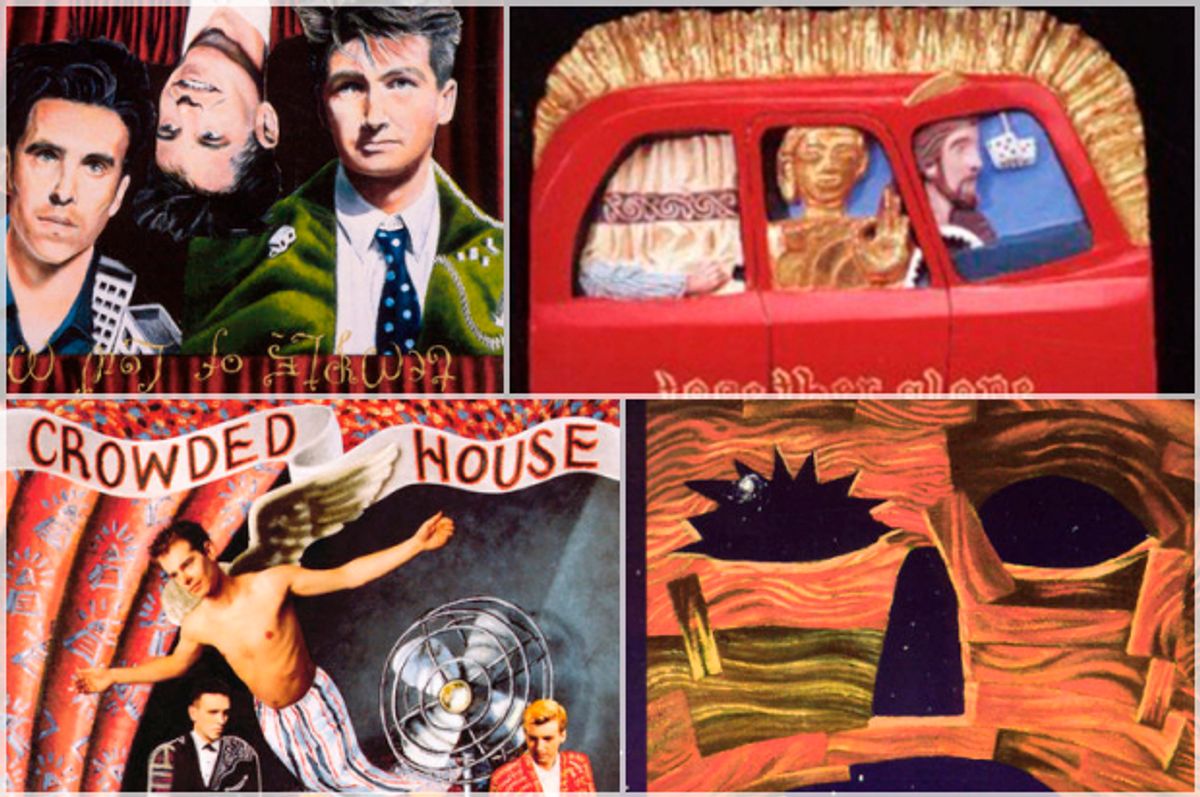 When Salon chatted with Crowded House frontman Neil Finn earlier this year, he revealed "a number of rereleases [would be] happening soon" related to the band's catalog. "I’m very happy to see I think all the albums will be reissued on vinyl," he said. "And we have found a number of little treasures that I’ve been editing down and editing down, lest I release anything substandard."

As promised, these rereleases arrived in stores — last week — in the form of generous deluxe editions of all six Crowded House studio albums and the 1999 rarities collection, "Afterglow." (Vinyl reissues are also part of the campaign, although these pressings lack some of the packaging flair of the CD versions.)

The reissues are loosely tied to Crowded House's 30th anniversary and the band's induction into the prestigious Australian Recording Industry Association Hall of Fame, an occasion that it plans to celebrate with concerts on the steps of the Sydney Opera House.

As fans know, however, the catalog re-pressing has been in the works for a long time. "Things sometimes need a couple of prods," Finn confirmed in an interview with The Second Disc. "We've been trying to get all these things together for almost 10 years. There's been a few people in and out of [label] Capitol [Records] in the U.S. that started the process," he said. "It just seemed like, given that we had this event coming up, it was a good deadline to aim for. Everybody needs a deadline."

This batch of reissues illustrates Crowded House's music exists in the hard-to-define spaces between genres. The band's influences are easy to spot (such as folk-rock, soul and psych rock, '60s jangle pop, the British Invasion) but combine for a singular sound.

A Crowded House song is always immediately identifiable as Crowded House; the band has its own sonic fingerprint. Finn's lyrics provide a guidebook on how to navigate life's divisions and fissures, whether personal, political or societal. But his songs circle back to universal themes centered on seeking comfort: solace in romance and relationships, and conceptualizing what home, safety and community look like. Finn conveys these lofty ideas in elaborate and elliptical songs that acknowledge that melancholy and longing are all part of the process and that being a curious student of the world is an ongoing journey.

The deluxe releases were certainly worth the wait, not least because of the care that obviously went into curating the bonus material. While B-sides or rare studio versions crop up here and there — highlighted by the gorgeous, piano-dissected distress call "Turn It Around," from 2010's "Intriguer," and the jazz-kissed, sad clown lament "So Dramatic" from 2007's "Time on Earth" — the bulk of the extra material hews toward demos, live songs, studio outtakes and alternate versions. In the case of "Afterglow," which is itself an odds and sods collection, the packed bonus disc (featuring the dynamite "A Taste of Something Divine," which resembles the kind of razor-burned, electronic-tinged experimentation U2 did during the '90s) is akin to a curiosity shop of oddities.

Due to Crowded House's creative approach, these parallel takes often sound like completely different songs, which makes listening to this stack of reissues akin to discovering dozens of new tunes. There's a stripped-down take on the "Temple of Low Men" song "Love This Life" that highlights ornate guitar and harmonies, for example, and a couple of intriguing alternate versions from 1993's "Together Alone": the ambient, percussion-chipped "Locked Out (Zen Mix)" and an early take on "Black and White Boy" with gruffer, unfettered guitars and desperate vocals.

In a gesture speaking to the band's insistence on not releasing a song unless it worked, some demos are quite different from the final studio versions. For example, "Walking on the Spot," a song dating from Crowded House's early days, didn't surface until "Together Alone" released seven years later. The brisk studio demo on the deluxe 1986 self-titled album is a blast: Its quirky horns, drum machine and vocal syncopation make it feel like a holdover from Finn's previous band, Split Enz.

That the band was not afraid of ripping up the source material and starting again — tossing out valid ideas in favor of other directions — is one of Crowded House's most admirable qualities. Finn's ability to be both meticulous and open-minded, a rare combination for songwriters to possess, is perhaps more impressive. As perfectionist as he was (and is), these glimpses into the musical process, and the ways he and the band woodshedded ideas, are transformative. Take "Private Universe": Anyone familiar with the seductive final take on the song might find it jarring to hear the initial version's prominent electric guitar jangle, minor key melody and vaguely menacing vocals.

These reissues demonstrate that this sense of adventure was baked into Crowded House almost from Day One. The bonus material on 1986's self-titled effort features dramatically different versions of familiar songs, from a home demo of "Something So Strong," featuring prominent mandolin and multipart harmonies, to a studio demo of "Hole in the River" with spurts of sudden hip-hop verses, à la Blondie's "Rapture." While some of this sonic slipperiness had to do with the band's trying to find its sound, it also points to the group's flexible approach.

The chemistry between the core founding members — Finn, bassist Nick Seymour and late drummer Paul Hester— is often on display, notably as a studio outtake of "Sister Madly" devolves into a bastardized cover of INXS' "Need You Tonight" and some goofing around related to inside jokes and vocal impressions. Song-wise, the home demos of "Woodface" songs possess a campfire jam vibe, from the handclap-happy "It's Only Natural" to the dusky acoustic strums of "Four Seasons in One Day." Other songs — "Be My Guest," a Crowded House rarity with a political bent, and a demo of "Weather With You" with its proud vocal approach intact — are forceful and confident. Even if Finn didn't have all the answers, he wasn't afraid to move mountains to seek them out.

Incredibly, it took a little bit of urging to get these particular collections of bonus tracks together. "As far as the studio stuff goes, I had a tough job convincing Neil that alternative versions of tracks were worthwhile and interesting," studio engineer Jeremy Ansell, who helped the band compile the bonus material, said in an interview with the site Super Deluxe Edition.

"He’s very fond of the home demos — as am I — but that’s what he wanted to concentrate on, the very early versions of songs that he would lovingly craft at home on a four-track or an eight-track; the times when he’d be really excited about the song, and they’d form into shape," Ansell said. "I mean, on a lot of other reissues, you might find alternative versions and things, and they’re interesting to a degree, but it’s not what Neil was keen on presenting this time round."

The logic behind Finn's hesitancy actually makes perfect sense, as it's a mix of maintaining some secrecy and staying contemporary and relevant. "There's always a trade-off between not wanting to demythologise the band, too much but I do think enough time has gone by," he told The Sydney Morning Herald. "So it's not entirely just an exercise in post-ARIA glorification and anniversary nostalgia. It will hopefully be something that seems contemporary and vital." Indeed, for many cases throughout these reissues, looking at what might have been exemplifies the beauty that was always present in Crowded House's music.