Many of you who voted for Trump reject the term "racism" — but it's clear you don't truly understand it. Read on. 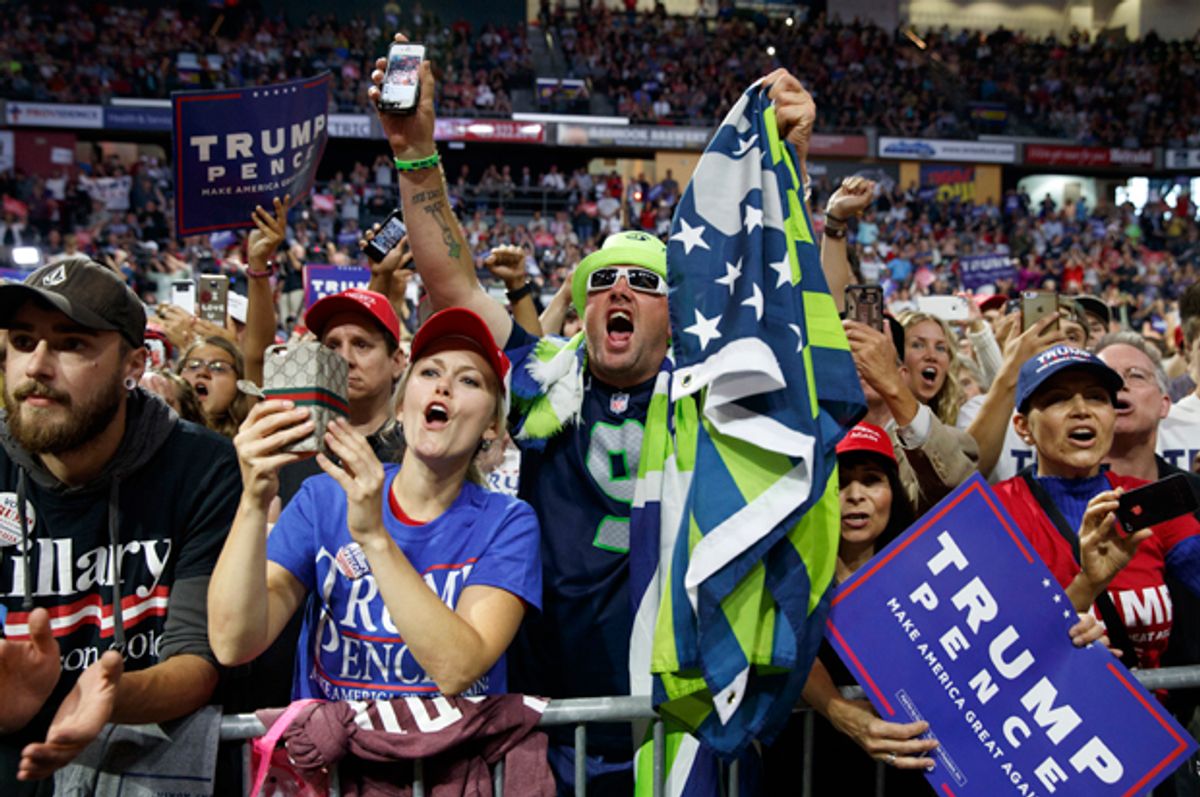 Since Election Day, I have received a good many emails from some of you who voted for Donald Trump. A number of the emails have been crude. Others are celebratory and indulge in a bit of understandable political grandstanding because “your guy” won — and I can understand your taking a victory lap given Trump’s surprise victory.

But what most of these emails have in common is a sense of hurt and anger from white folks about being called “racists” because they voted for Trump. Looking around the internet at news sites, social media and other public forums, this seems to be a common sentiment.

It has forced me to do some hard thinking and deep reflection. There is a clear disconnect between the general public and those of us who write and think about politics for a living. The so-called smart people, with few exceptions were flabbergasted and shocked by Trump’s victory because of that social distance and disconnect.

This disconnect is even deeper for those of us who write and think about race, politics and the general (white) public. One of my favorite statements is that “racism is a fact; it is not an opinion.” This is my way of neatly summarizing the volumes upon volumes of research by social scientists, historians, philosophers and others that support that conclusion. Unfortunately, such a claim is often insufficient to overcome barriers in human experiences and a belief shared by many white folks that racism is just about “perspective” and “emotions” as opposed to hard facts and tangible — often life and death — realities.

These challenges in how we talk about and understand race and politics are also a reflection of how language sometimes obfuscates and clouds more than it reveals, a broken public school system that does not encourage critical thinking, and an American corporate news media that avoids complex and serious discussions.

So what is racism?

It is common for people to define racism as the use of mean words or racial slurs. Racism is also often thought of as a belief that there are fixed biological differences between different groups of people because of skin color. The idea that some groups of people are “smarter” or “more intelligent” than others would be one such example. People also tend assume a “real” racist is a member of a hate group like the Ku Klux Klan or a white supremacist or a neo-Nazi. Of course, these are clear examples of racism.

But racism is so much more. It is social institutions like the police and prisons unfairly, often illegally, and disproportionately harassing, brutalizing, preying upon and killing black and brown people. Racism is also re-created in our neighborhoods and schools when some communities get fewer resources than others — and those communities are often black and brown. Racism is materially manifest when banks charge nonwhites higher interest rates for the same loans and mortgages as white folks who have the same credit score and risk profile. These outcomes are not a coincidence; they are the results of decisions made by citizens and leaders.

Most white folks will not admit to being a racist or holding any ill intent toward people because of their skin color. In today’s multicultural and diverse America, who would? But we must all remember that admitting to being a racist is not a necessary requirement for being one.

Often white folks will say, “I didn’t mean it” or “that wasn’t my intent” when confronted about racist behavior. (Men strike a similar tone when faced with their sexism.) Personal intent often has little if anything to do with racism. In fact, many white folks on a deep and subconscious level are racist against blacks and other people of color.

What about president-elect Donald Trump?

We can look at his words, deeds and policies in order to determine (1) if he is a racist and (2) if racism is operative in his politics.

The evidence is pretty overwhelming against him. Trump has said that a Mexican-American judge cannot fairly consider his case because of his “ethnic background.” Trump has repeatedly said that many “illegal immigrants” (meaning those who are Hispanics and Latinos) come to America to rape and kill. This is also not true and slurs an entire group of people.

Some of Trump’s closest advisers are white supremacists and white nationalists. Trump and his father were repeatedly sued for not allowing blacks, Puerto Ricans and other nonwhites to live in the apartment buildings they owned in New York City. Trump has said that black people are basically a group of idiots and losers whose lives are a living hell.

Trump led the birther conspiracy that suggested that Barack Obama, the country's first black president, was not eligible to hold the office because he was supposedly not born in the country. Trump summoned old and very ugly racist and anti-Semitic stereotypes when he reportedly said, “Black guys counting my money! I hate it. The only kind of people I want counting my money are little short guys that wear yarmulkes every day."

Trump reportedly continued on with, "I’ve got to tell you something else. I think that the guy is lazy. And it’s probably not his fault because laziness is a trait in blacks. It really is; I believe that. It’s not anything they can control.”

As a candidate, Trump promised to target African-American and Latinos for racial profiling and harassment by the police. He also wanted to single out Muslims for banning from the United States and perhaps even mandate that Muslims who are already here register with the government.

These examples, and many others, clearly indicate that Trump as well as his policies are racist.

You must also grapple with an additional challenging fact. Activists and scholars such as Jane Elliot, Tim Wise and Joe Feagin — who are all white by the way, so hopefully you will trust their views — remind us that tolerating and choosing to associate with racists is in and of itself an act of racism. This is an example of what is known as "casual racism," whereby many white folks have the privilege of overlooking racist behavior by their friends, co-workers or relatives because "it is no big deal to them" and they care about those people despite their bigotry.

People of color do not have such a luxury because racism is an existential threat to our safety, health and security. A person cannot choose their blood relations. But we can choose our friends, acquaintances, and in Trump's case, political advisers and confidants.

What about you Donald Trump supporters out there?

Researchers have spent many months interviewing, talking to and trying to understand the motivations of people who were more likely to vote for Trump. This may be challenging for you to read, but we have learned quite a few things. Trump supporters are more likely to be authoritarian; believe that blacks are “lazy” and “less intelligent” than whites; are hostile to Muslims; do not like immigrants; and in general are afraid and fearful that “their country” is being “taken away” from them by nonwhites.

It is abundantly clear that xenophobia and racism is present in many of those who support Donald Trump.

I can imagine many out there will objection to that conclusion: You might say, “But me and many other white people I know voted for Obama last time. My support for Donald Trump has nothing to do with racism!”

My answer: In 2008 and 2012 there were white voters who supported Obama despite the fact that he was a black man. Racism is sometimes outweighed by other considerations. Trump mastered this calculus.

“It was the economy and not racism!” Interesting point. Racism is often used to scare white voters into thinking that people of color are coming to “take their jobs” or undermine their standard of living. This is an all-too-common political tactic in America and one also based on a lie.

Voters do make decisions based on a number of factors. For example, a person can be motivated by both concerns about the economy as well as hostility — subconscious or overt and intentional — toward black and brown people.

“How dare you! I have black and Hispanic friends. I can’t be a racist!” This is a common deflection. A person may like a given person of color but still not like the racial or ethnic group to which they belong.

“I wanted to shake things up!” Yes, you did indeed shake things up by electing Donald Trump. And you did this by electing a person to the most powerful position in the world who has demonstrated by his actions, words and circle of advisers and confidants that he is a racist and an incompetent.

“Blacks and Hispanics voted for Trump too! This is proof that I am not a racist and Trump isn’t either!” Being a person of color does not determine one's political leanings, nor does it make one immune from celebrity culture, white racism, bigotry and the allure of authoritarianism. Unfortunately, there are blacks and Hispanics who, like white folks, are also seduced by all those things.

I have no doubt that there are many "good" white folks like you who voted for and support Trump. You are kind to animals, take care of your aged parents and other relatives and perhaps even neighbors, are nice to children, donate to charity, pick up litter and try to live according to Christian values. But you should be reminded that human history is full of examples where “good” people supported horrible leaders who, in turn, did wicked things to their fellow citizens.

At this moment in history, this means that people like you who voted for and support Trump are racists who have made a decision to do harm to your fellow Americans. You should make peace with this fact and own its moral and ethical implications. Unfortunately, there are many people like you who instead of being ashamed are feeling quite proud. You will soon learn with Trump in office how racism does not just hurt black and brown folks; it can and often does hurt white people, too. I hope you enjoy the lesson.