"It was kind of fun to play Darwin": Tracing TV's evolution in "The Platinum Age of Television" 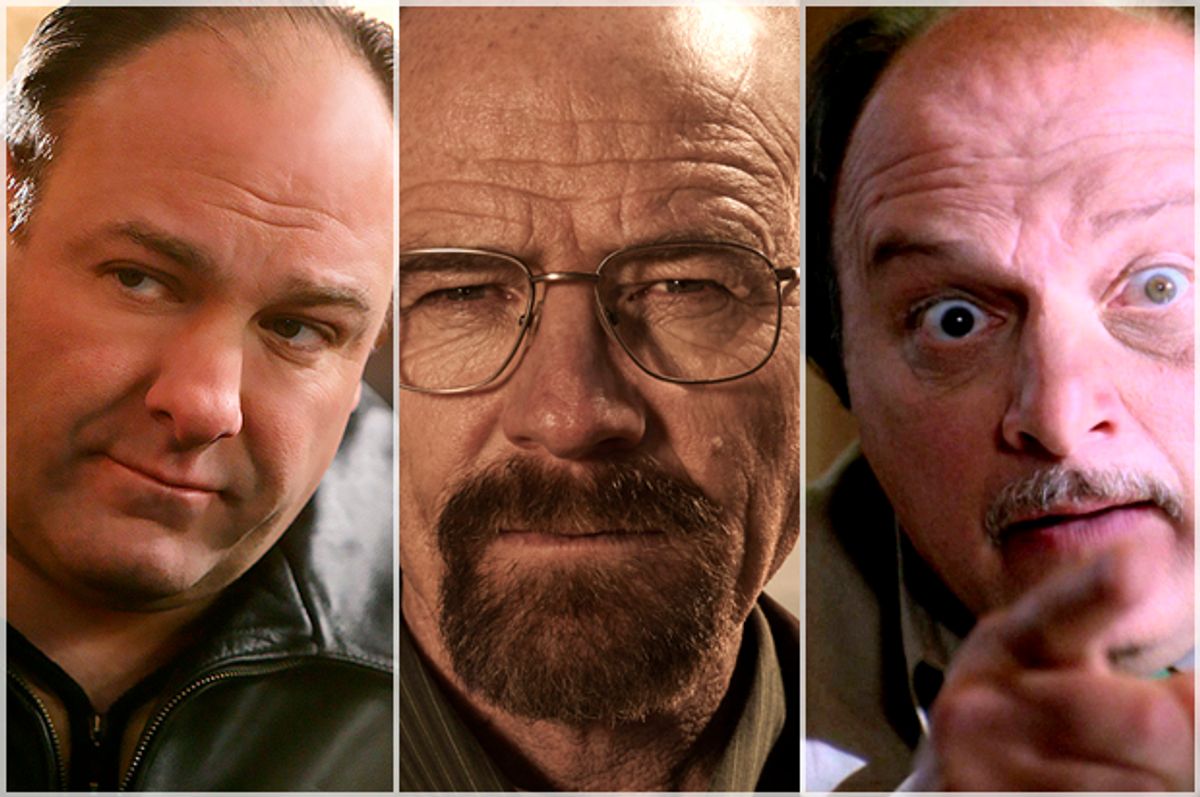 Even in our era of endless TV options, it’s impossible to please everyone.

Few know that better than David Bianculli, a veteran television expert who has analyzed the medium for more than 40 years. NPR listeners know Bianculli as the guest host and resident TV critic on “Fresh Air with Terry Gross,” but he’s also the author of “The Platinum Age of Television: From I Love Lucy to The Walking Dead, How TV Became Terrific,” released this week.

Bianculli’s latest book joins an expanding TV-centric literary canon, a field that includes Alan Sepinwall and Matt Zoller Seitz’s recently released “TV (The Book),” essentially a very large list of series considered by those two experts to be greatest shows of all time.

Where Sepinwall and Seitz’s tome is designed to incite debate, “The Platinum Age of Television” takes a softer, more academic approach by mapping what Bianculli has called “The Theory of Quality Television Evolution.”

“I have it done kind of like the five stages of man,” he explained in a recent phone interview. “In each one of the evolutionary chapters, where I look at a genre, I try to pinpoint the five most important developmental steps along the way."

Added Bianculli: "It was kind of fun to play Darwin and make these connections that even I as a TV critic for more than 40 years hadn’t really thought about so much, in terms of looking for where were the first examples of this, or where did it lead to?"

Though Bianculli admitted that his decision to set each chapter’s upper limit to five selections was somewhat arbitrary, this lends an organizational efficiency to a wide-reaching subject. Readers eager to binge on TV history will be as satisfied as those who choose to surf through chapters and genres on demand and in the order of their choosing.

Want to find out where “The Wire” ranks? Curious to examine various taxonomies of dramas, sitcoms and variety shows? It’s all there, right in the front of the book. “Breaking Bad,” “St. Elsewhere,” “The West Wing,” “The Bob Newhart Show” — they’re all there, alongside older classics such as “Your Show of Shows” and “Fawlty Towers.”

“The way that I got through every genre without driving myself insane was by imagining it like I’m writing about this necklace,” Bianculli said. “And there will only be five pearls in it. But I’m writing about the entire necklace, so everything that connects one pearl to the next is important, too, and sometimes I can go into depth on that.”

Included within the links between chapters are profiles of the influential producers and stars considered to be the smiths forging TV's platinum age, a varied company that includes Steven Bochco, Vince Gilligan, Carol Burnett, Amy Schumer and Louis C.K.

Also notable is HBO's heavy presence in “The Platinum Age of Television.”

“I didn’t go out of my way to include anything from HBO, but it’s sort of clear that when you get into the '90s, what it was doing for a while there was it was intentionally trying to innovate,” Bianculli explained.  “And think about the whole model for what has happened since: This entire century is one cable network after another making its bones and its reputation by coming out with one spectacularly different show."

He added, “It’s easier, I think, for them than it was for broadcast networks when they were programming 22 hours a week.”

Although Bianculli easily covered the most significant genres, including children’s programs; soap operas; Westerns; crime, legal and medical series and various types of sitcoms — he even created a term, “splitcom,” to describe domestic-workplace hybrids such as “Louie” — “The Platinum Age of Television” isn’t an exhaustive, all-inclusive tome. That’s the nigh impossible, especially right now. We’re not merely in an era of high-quality television; we’re dealing with an outrageous volume of content.

What if you don’t see your favorite show or star listed within the opening pages of “The Platinum Age of Television”?

This is where the second favorite pastime of TV addicts, debate, enters in.

For example, a number of readers may examine the lists featured in each chapter’s ancestral tree and wonder why, for instance, “Friends” didn’t make the cut in any of the sitcom categories.

Before you ask — yes, Bianculli thought about it. He decided that it was too much like other more influential series to merit ranking as a key evolutionary stage.

Likewise, readers looking for what the TV critic has to say about “Game of Thrones” will be left wanting.

“I feel like I gave ‘Game of Thrones’ pretty short shrift,” Bianculli confessed. “There are a couple of sentences on ‘Game of Thrones,’ and that’s it. So arguably I could have written more about that one and given its rabid fan base,” he said.

“Everyone wants to see their favorite shows included,” he admitted.

The author is not just saying this to pander; he experienced such disappointment firsthand. Bianculli spoke at length about his struggles over whether to include “Homicide: Life on the Street” or “The Shield” in a section on crime. That chapter traces the genre's key stages of evolution from “Hill Street Blues” to “NYPD Blue” and eventually “The Sopranos” before ending with “Breaking Bad.” And “The Shield” won out in the end.

“I’m still arguing with myself about it,” he said. “But what happened in the first hour of ‘The Shield’ and what they came up with . . . to wrap it up in the last hour made that a more important step than ‘Homicide.’ Even though week by week, I think ‘Homicide’ was a little bit more ambitious overall.  . . .  I still write a lot about “Homicide” because it was important.”

Nevertheless, “no matter which side of that argument you took,” he added, “I would listen to you very sympathetically.”