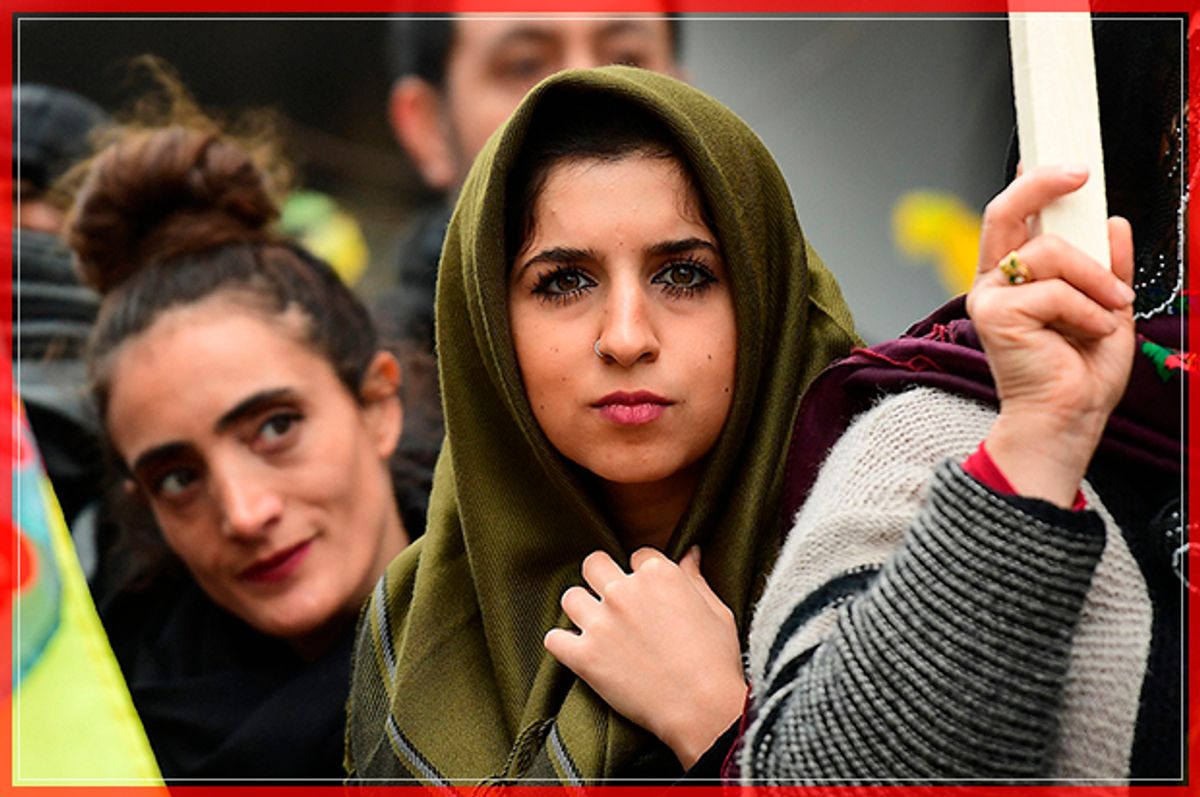 A woman is pictured as participants gather during a pro-Kurdish demonstration denouncing the political course of the Turkish president after the arrest of pro-Kurdish politicians earlier this month, on November 17, 2016, near the European institutions in Brussels. Turkey declared a state of emergency following a failed coup on July 15, arresting tens of thousands of people as part of a widespread crackdown which critics say has gone well beyond the alleged plotters to include anyone daring to criticise President Recep Tayyip Erdogan. The crackdown comes as Ankara wages a relentless battle to crush the PKK, which has stepped up attacks since the collapse of a two-and-a-half-year ceasefire in July 2015. / AFP / EMMANUEL DUNAND (Photo credit should read EMMANUEL DUNAND/AFP/Getty Images) (Afp/getty Images)
-- The New York Times reported that Donald Trump is trying to figure out a way to keep living at Trump Tower, instead of relocating completely to the White House, as most presidents do. Since doing this will require shutting down part of 5th Avenue every time he's here, this desire of his is quickly turning into a symbol of his corruption and indifference to the wellbeing of the Americans he supposedly ran for president to serve.

But activists should also note that this is an opportunity. Protests outside of Trump Tower are already getting under Trump's skin and causing him to whine in a very unpresidential manner on Twitter. Every time he sleeps in Trump Tower, that's an opportunity to protest him and provoke hm to issue further reminders to the country that he's the single most unqualified person ever to hold this office. And making sure people don't forget that is tantamount.

Brussels, Belgium   Emmanuel Dunand/Getty
Participants gather during a pro-Kurdish demonstration near the European institutions in Brussels Turkey, a NATO member and Western ally, has been conducting a brutal campaign of repression against its Kurdish minority for more than a year now. Kurds, who make up roughly 20 percent of Turkey's nearly 80 million population, have long faced systemic discrimination in the country, but the violence has escalated since July 2015. Thousands of Kurdish rebels and civilians have been killed and hundreds of thousands more have been displaced amid shelling by the Turkish military. After a failed coup attempt in July, the political crackdown accelerated even further. In the past three months, increasingly authoritarian President Recep Tayyip Erdogan has purged more than 110,000 people and imprisoned nearly 40,000. Earlier this month, a dozen lawmakers from the HDP — a pro-Kurdish left-wing party, the third-largest in parliament — were detained, leading to international condemnation. Turkey's Western allies have done virtually nothing to stop the repression, and are supporting Erdogan's military intervention in Syria.

London, England   John Phillips/Getty
A bear's head carved in ice and snow is featured at the Magical Ice Kingdom in Hyde Park So here's a fun story about snow. In London, when there's about an inch of snow, the city grinds to a halt. The mass transit system shuts down, and the airport closes. In short, you can't get in or out. Why they'd be celebrating snow is beyond me.