The hate divide: Hate crimes are up, up, up and Trump supporters want to deny, deny, deny

Trump, his family and supporters suggest the real and precipitous rise in hate crimes is inflated or fabricated 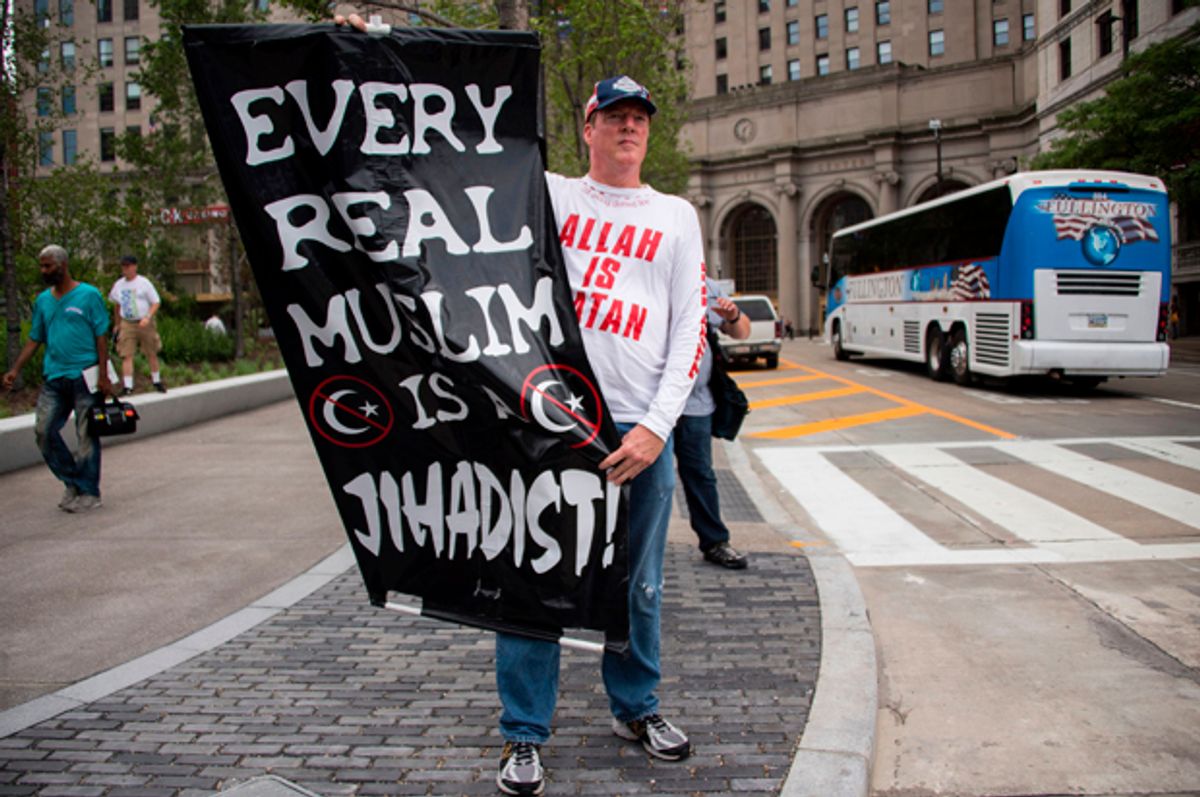 If a hate crime occurs in America and a Trump supporter doesn’t see it, did it even happen?

The evidence suggests that, denial by President-elect Donald Trump and his fans notwithstanding, the answer is yes. In the first five days after last Tuesday’s election, the Southern Poverty Law Center received reports of 437 hate crimes across the country. Two hundred and fifty of those were reported in the first two days alone, which is more than the center sees in the typical six-month span.

In addition, the FBI announced on Monday that it recorded 5,818 hate crimes in 2015, a 6 percent increase over the previous year. And this is at a time when the overall crime rate in the country, despite what a majority of people might think, has actually decreased.

Given the angry tone and tenor of the election and the fact that the winning candidate did most of his campaigning by putting on rallies that even Leni Riefenstahl might have thought were a tad much, it seems a good bet that much of the inspiration for this wave of hate crimes can be laid at the feet of our new, orange obergruppenfuhrer, Donald Trump.

The evidence is pretty solid. Over the course of his 17-month campaign, Trump disparaged and threatened minorities, blaming Muslims and Hispanics in particular for a host of our country’s ills. He portrayed this blame game as some sort of national emergency, telling his followers, “We don’t have time to be politically correct.” He gleefully cheered when protestors, who were often black or Hispanic, were manhandled and occasionally beaten while the police were removing them from his rallies.

In short, he gave already angry people permission to give in to their worst instincts and behave hatefully.

Then the day after he shocked everyone, including himself, by winning the election, minorities everywhere found themselves threatened by white people. Muslim women were told they were no longer allowed to wear the hijab. Hispanics were told their relatives would soon be deported. Spray-painted swastikas showed up on the walls of synagogues and mosques. African-American students at an Ivy League school — Trump’s alma mater, the University of Pennsylvania, in fact — woke up one morning to find their names added to a list calling for them to all be lynched.

What is the reaction of Trump and his supporters? Essentially the equivalent of putting their hands over their ears and shouting, “LA, LA, LA, LA, LA. I CAN’T HEAR YOU!”

You can see this all over social media and comments sections, where alleged Trump supporters are quick to claim stories of hate crimes are made up. You can see this with figures like former Arkansas governor Mike Huckabee, who shared on Facebook and Twitter a story about two college students in Chicago who had spray-painted swastikas and other hateful garbage all over a campus chapel. The story’s original sources claimed the students were Jewish leftists trying to frame Trump supporters.

As Shaun King helpfully pointed out, this incident occurred last March and the original reports on it do not claim the students are Jewish or liberal. In fact, the original news report on it in the Chicago Tribune does not give any motivation for the incident. The fact that it's making its way around conservative circles now is a pathetic effort at pushing back on reports of a rise in hate crimes this past week.

Most of all, you could see the denial in the Trump family interview on “60 Minutes” this past Sunday night. The new president-elect told Lesley Stahl that, while anyone committing hate crimes in his name should “stop it,” the reports of hate crimes and terrified minorities were being “built up” by the press. His son, Donald Trump Jr., implied that the stories of fearful citizens are “fabricated.”

This was quite a message to the hordes of angry Trump fans now feeling empowered to tear hijabs off the heads of Muslim-American women or march through the halls of their high school chanting “White power.” Do whatever, guys, the Trumps seemed to be telling their fans. We’ll claim it's all lies from the mainstream media.

As if to underscore just how unseriously he takes any of this, Trump on Monday named Steve Bannon, the white nationalist who runs the vitriolic alt-right hate site Breitbart, as his senior White House adviser. So much for reining in the hate.

It should surprise no one that hate crimes against minorities would follow populist demagoguery. This is not a new discovery, and Trump’s hateful rants have been on display for nearly a year and a half. Yet Trump and his supporters do seem surprised — or at the very least indifferent — to what he may have unleashed. That bodes poorly for what kind of a president he will be, not that there was any doubt before the election.

Journalists have made a cottage industry of writing about a certain type of Trump voter — usually rural, white, poor or working class — who is deserving of empathy. Why aren't Trump and his voters not made to show the same empathy to victims of the bigotry that the talking xenophobic Cheeto has signal boosted in his run to the White House? It's a question well worth pondering.