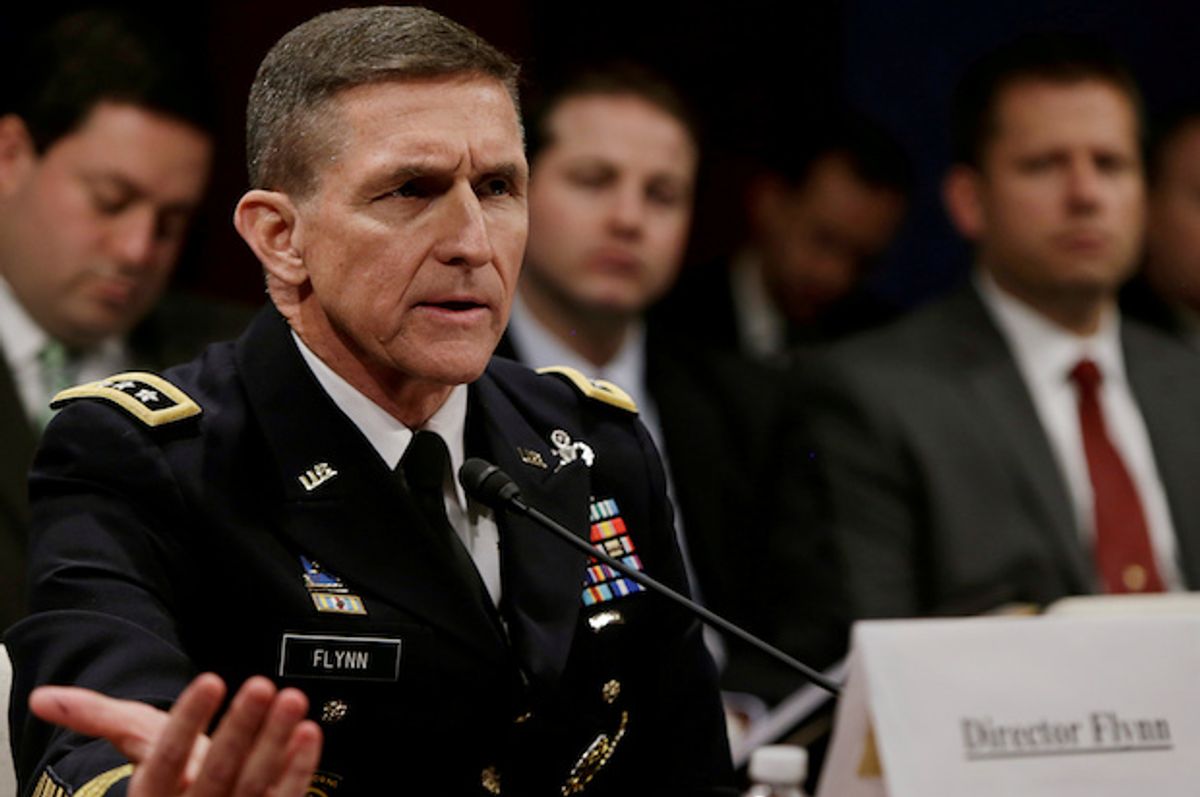 Flynn has expressed extreme, bigoted views about Muslims. He has likened Islam to a “cancer” that has infected 1.6 billion people and is growing, and has echoed far-right, anti-Muslim conspiracy theories.

In an August speech for the right-wing anti-Muslim group ACT! for America, for which he has served as an adviser, Flynn claimed Islamist extremists are plotting to infiltrate Western countries and “get into the bloodstream of the opposition.”

“Islam is a political ideology,” not a religion, Flynn said. “It definitely hides behind being a religion.”

He also parroted the right-wing myth that "creeping Sharia" is conquering America, and applauded an anti-Muslim Texas politician.

Some media outlets, such as The New York Times, have misleadingly described Flynn as "anti-Islamist." Yet he is not just opposed to Islamism, which is a political movement; he has expressed prejudiced views about Islam and Muslims as a whole.

In February, Flynn shared an anti-Muslim propaganda video on Twitter, writing, "Fear of Muslims is RATIONAL." The video he posted claims "the term Islamophobia is an oxymoron."

The video Flynn recommended, coincidentally, names several Islamist extremist groups that have been supported by the U.S. government and its Gulf allies.

The video also insists people are unhappy in countries in the Middle East, South Asia and Africa — including Kenya, which it implies is a Muslim-majority country, but is actually largely Christian, with a small Muslim minority — yet are happy in Western countries that previously colonized those same Global South nations.

Flynn wrote a whole book articulating these extreme, jingoistic ideas, with the title "The Field of Fight: How We Can Win the Global War Against Radical Islam and Its Allies."

A hawkish militarist who influenced the Obama administration to increase its use of covert special operations and drone assassinations, Flynn contradicts the isolationist views that Trump has sometimes, albeit very inconsistently, expressed.

At the 2016 Republican National Convention, Flynn declared that "American exceptionalism must never fade."

Likewise, Flynn's bio on Twitter says "Believe in #AmericanExceptionalism" and "I stand for American principles and values."

In his RNC speech, the retired general conflated Sunni extremist ideologies shared by Salafi groups like ISIS and al-Qaida (and spread by close U.S. allies like Saudi Arabia) with Iran, a Shia nation whose government violently opposes those groups.

Flynn has taken a very hawkish stance against Iran, and has been accused of serving as a paid lobbyist on behalf of the Turkish government.

Moreover, in his RNC speech, Flynn stressed that the U.S. is based on "Judeo-Christian values," just after he warned about the threat of Islamist extremism, feeding into the "holy war" myth about wars in the Middle East.

Flynn has previously implied that he might support killing the families of suspected Islamist militants.

Journalist Jeremy Scahill, who quipped that Flynn "has basically become Trump’s private belligerent Wikipedia on defense policy," also noted that the former DIA chief was "one of the most influential figures in the dramatic post-9/11 expansion of the role of U.S. Special Operations forces globally."

Flynn led the intelligence operations of Joint Special Operations Command, or JSOC, and "was the embodiment of Donald Rumsfeld’s view that the world is the battlefield," Scahill wrote. "Flynn’s presence in Trump’s corner means that a very sophisticated, accomplished assassin could end up in a position of tremendous authority."

Flynn will follow in the steps of such previous national security advisers as Susan Rice, Condoleezza Rice and Henry Kissinger.

Kissinger, perhaps the most infamous former national security adviser, is an accused war criminal who has overseen policies that led to the deaths of millions of people. He also met with Trump this week, in order to discuss China, Russia and Iran.