"No reasonable officer would have used deadly force": Charges in the police shooting of Philando Castile are a reminder of the potential for police brutality in Trump's America 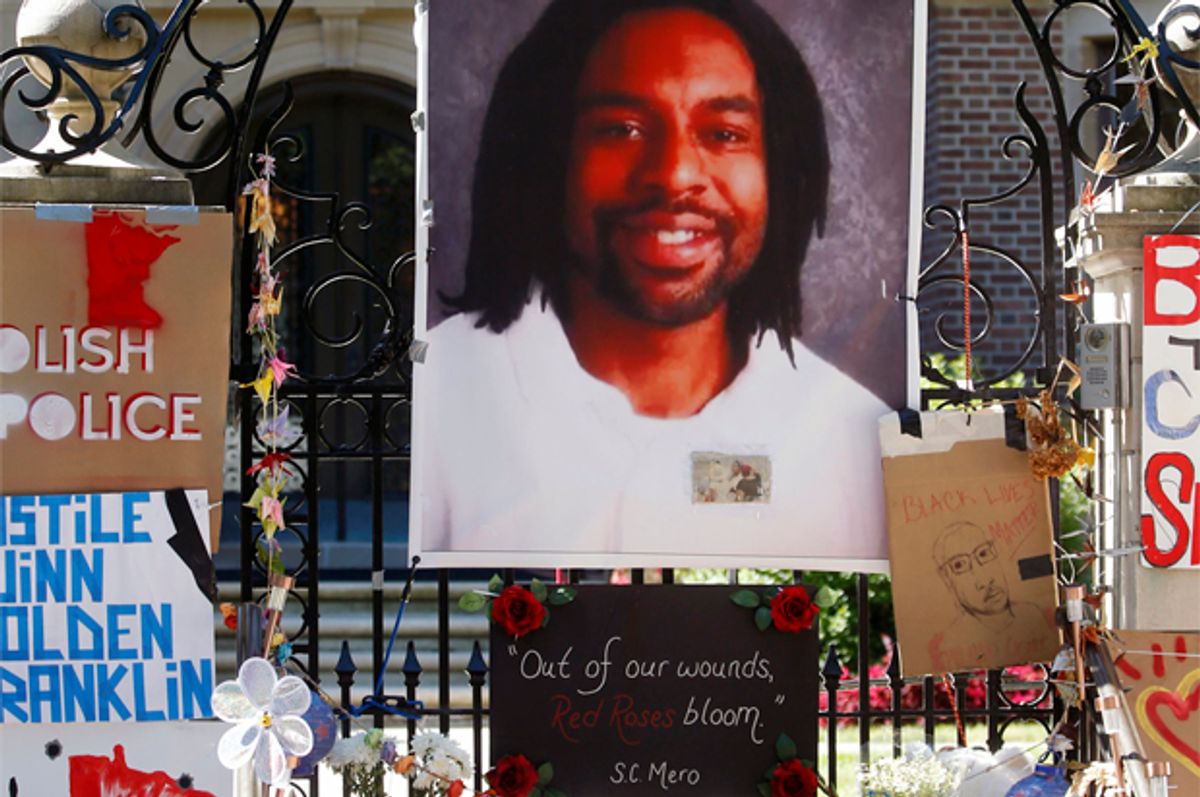 On July 9, Philando Castile was driving in a car with his girlfriend and her child. He was stopped by Jeronimo Yanez, a Minneapolis area police officer. Yanez questioned Castile, who answered all of his questions politely and fully complied with his instructions.

Castile also informed Yanez that he was a licensed to carry a gun and had said weapon on his person. Yanez panicked and shot and killed Castile while his girlfriend recorded and broadcast the horrific events to the world live, via Facebook. For Yanez, the mere sight of a black man legally exercising his Second Amendment rights caused — as it too often does with America’s police — an instinctively reflexive moment of violent and lethal “Negrophobia.”

The death of Castile was as predictable as it was avoidable. Minneapolis and its surrounding communities are among the most racially segregated in the United States. The police enforce that literal version of the color line. In that role, Minneapolis area police routinely harass and violate the civil rights of African-Americans. Castile himself was stopped 52 times by Minneapolis area police before that final encounter. In many ways, racism combined with the rules of probability ended Castile’s life that day in July.

In an extraordinary move by a Minnesota prosecutor, authorities said the officer, not the civilian, is to blame for the tragic events that turned a traffic stop in a Twin Cities suburb into a flash point in the national debate over racial profiling and police use of force.

Yanez pulled Castile, a 32-year-old, over at 9:05 p.m. July 9 on Larpenteur Avenue near Fry Street in Falcon Heights. By 9:06 p.m., the young officer had fired seven shots into Castile’s car, killing him as his girlfriend and her 4-year-old daughter looked on.

For those actions, Ramsey County Attorney John Choi said at a news conference Wednesday morning, Yanez will be charged with three felony counts — second-degree manslaughter and two counts of dangerous discharge of a firearm. He’s the first Minnesota officer charged in an on-duty killing in modern memory.

“To those of you who may say this incident was Philando Castile’s fault, I would submit that no reasonable officer — knowing, seeing and hearing what officer Yanez did at the time — would have used deadly force under these circumstances,” Choi said. “I have given officer Yanez every benefit of the doubt on his use of deadly force, but I cannot allow the death of a motorist who was lawfully carrying a firearm under these facts and circumstances to go unaccounted for.”

Choi’s decision is extremely uncommon. In the United States police are rarely held accountable when they abuse and harm the public. This is especially true if the victim is not white. (Police violence against poor, mentally ill and undocumented residents is also rarely punished.)

Ultimately, being a police officer in America is one of the few jobs where a person with a high school degree can be given a gun, a uniform, a pension and the power of life and death over another person — a power that he or she all too often can exercise with carte blanche and near immunity and impunity under the law.

Yanez’s being charged with manslaughter is far from a guarantee that he will be convicted for killing Castile: Police are rarely found guilty of misconduct. But this small victory should be savored by those of us who care about civil rights and human dignity because in Donald Trump’s world and upcoming presidential administration such moments will likely be very few and far between.

Trump will not only be the chief executive but also the chief law enforcement agent of the United States. While a president is not responsible for enforcing the law on a local and state level, he does set the tone for the nation. The president does so through words, actions and policies, and through nominees and appointments to key positions. This should fill those of us who value civil rights and civil liberties with dread.

Under his “law and order” agenda, Trump has promised to make unconstitutional harassment of blacks and Latinos under “stop and frisk” policies  a national priority. He has also promised to put more police in America’s “inner cities.” This will increase what is known as “overpolicing” and lead to more instances of violence and, yes, death, as people of color are disproportionately and unfairly victimized by the country’s cops.

Trump has described as “thugs” and “bad dudes” members of the Black Lives Matter movement and others who are struggling for the full and equal rights of all Americans in the face of police brutality and violence.

He placed full-page ads in all of New York City’s major newspapers calling for the de facto lynching of the five young black and Latino men charged with rape in the infamous 1989 Central Park case. These men were later found innocent of all charges after serving almost 30 years in prison. Despite their having been exonerated, Trump still has insisted that they are guilty and should be punished. He also has refused to apologize for publicly calling for their deaths.

Trump’s administration is a rogues' gallery of people who are hostile to the civil rights, dignity, equality and freedom of African-Americans and other people of color. Trump’s chief adviser will be Stephen Bannon, who is a white supremacist and white nationalist who has run the right-wing propaganda website Breitbart.com.

Kris Kobach has been advising Trump’s transition team. Kobach served as Kansas secretary of state and has advocated laws that allow police to demand “citizenship papers” from people who look like “illegal aliens” and is also an advocate of racial profiling. He also supports creating a national registry for Muslims and has been instrumental in voter-suppression laws that target African-Americans and other communities.

Former New York City mayor Rudy Giuliani is likely to be part of Trump’s administration. During Giuliani's time as mayor, the New York Police Department established its unconstitutional stop and frisk program. His police department was also involved in numerous high-profile incidents of harassment and violence against blacks and Latinos in New York. He is an avowed enemy of the Black Lives Matter movement.

Trump is also rumored to be considering Milwaukee County Sheriff David Clarke for a position as head of the Department of Homeland Security. Police under Clarke's command denied an inmate, Terrill Thomas, water and other assistance for six days and he soon died. Thomas is one at least 10 people who have died in the custody of the Milwaukee County sheriff’s office from 2008 to 2012. In addition, Clarke is extremely hostile toward African-Americans. He's a recurring guest on the right-wing news media, where in his designated role as a black conservative he routinely demeans black Americans and provides excuses and cover for white racism.

It is clear that protecting the civil rights of African-Americans, other people of color, gays and lesbians or members of additional marginalized groups will not be a priority under Donald Trump’s administration.

Americans are in the streets protesting the election of Donald Trump because his presidency represents a horrific deviation from basic norms and standards of democracy, decency and civility. The stakes are especially high for Hispanics, Latinos, African-Americans, Muslims and Arabs, gays and lesbians and women — groups who quite literally have skin in this political game as Trump’s Terrordome will include all of them.

The recent killings of black and brown Americans such as Philando Castile, Eric Garner, Michael Brown, Tamir Rice, Rekia Boyd, Laquan McDonald, Walter Scott and so many others by America’s police are painful reminders of how justice is neither color-blind nor fair in the United States and I worry that such tragedies are a preview of what is to come under Trump’s presidency.