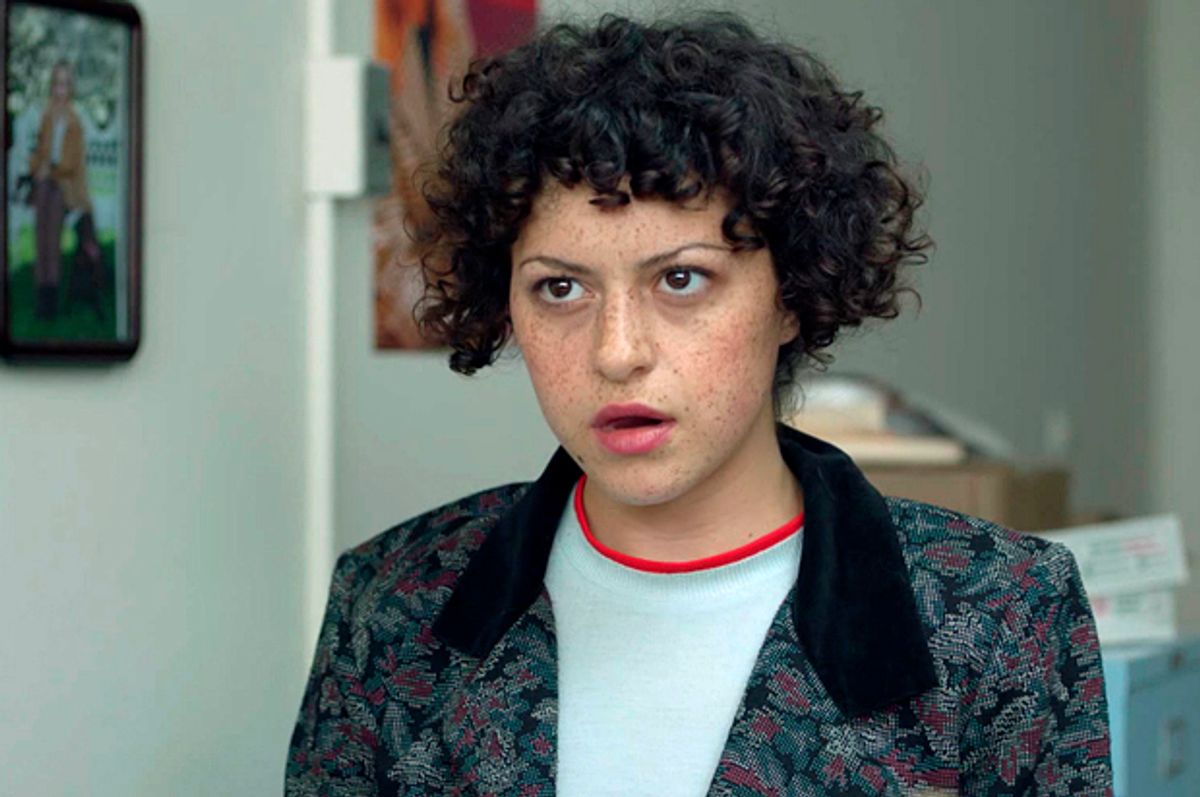 Among the many bright spots being muted by the noisy political dissonance enveloping us is the high level of creative innovation taking place in the realm of the half-hour television content.

This refers to series such as “Atlanta” and “Better Things” on FX, “One Mississippi” and “Fleabag” on Amazon, and “Insecure” on HBO — shows that can defy longstanding sitcom dictates requiring writers to deliver punchlines with metronomic regularity.

These shows are true comedies, though — searingly funny ones, too. But their producers are free to explore more esoteric concepts along the way, such as what it’s like to struggle in the inner city as a young African-American man with high aspirations (“Atlanta”), or how it feels to lose one’s mother while mourning the loss of parts of the self (“One Mississippi”).

“Better Things” creator Pamela Adlon emphasizes feelings above all in her show, connecting with the viewer via empathy. That approach also is played with in TBS’s “Search Party,” albeit quite differently and with none of the conscious emphasis on emotional warmth.

Billed as a dark comedy, TBS is airing the entire 10-episode season of “Search Party” by double-pumping episodes at 11 p.m. starting on Monday and concluding next Friday. That’s one way to lean into the Thanksgiving week TV drought: Create a binge event!

Or maybe the cable channel did not quite know what to do with this odd project; if it had more mainstream appeal, “Search Party” would be offered as primetime competition instead of dangled in front of the Adult Swim crowd.

“Search Party” is a curious experiment. Created by Sarah-Violet Bliss and Charles Rogers, whose credits include the indie film “Fort Tilden,” and executive produced by Michael Showalter and Lilly Burns, “Search Party” owes a tonal debt to shows such as “Broad City” or HBO’s “Bored to Death,” and is thematically knottier than the average late-night brain candy.

The show tests both the viewer’s willingness to follow a potentially specious mystery through to what could be an uncertain conclusion, and her level of tolerance for the self-centered characters leading her from clue to clue. And folded into its story is a critique of the image-conscious culture encouraged by social media, where tragedy begets a kind of fashionable sorrow tailored to soothe the ersatz “griever” more than the sufferer.

Yet “Search Party” doesn’t feel unreasonably mean-spirited, because the writers derive most of its humor from acts of pure cluelessness or turns toward the bizarre. When we laugh at a character, it’s because he or she richly deserves it.

Alia Shawkat stars as Dory, an underappreciated personal assistant who otherwise doesn’t have much going on in her life. Even Dory’s boyfriend Drew (John Reynolds) is a bland dullard who relies on her to affirm his self-worth and make him dinner.

As the series opens, Dory happens to pass a missing-person flyer with the photo of an acquaintance of hers from college, Chantal Witherbottom (Clare McNulty). Though Dory barely knew Chantal, she quickly becomes obsessed with finding her lost pal.

Dory’s motivation has little to do with any charitable inclinations. Asked by her ex-boyfriend Julian (Brandon Micheal Hall) why she’s so concerned about this girl she barely knows, Dory explains, “It’s made me wonder, would anybody even care if something bad happened to me?... I’m just very upset by it all. And it’s devastating.”

“For her,” a gobsmacked Julian replies, “not for you!”

Many of us know people like Dory. A good number of us have been Dory at some point in our lives. And this knowledge makes watching “Search Party” an exercise in cringing with self-recognition while surrendering to gentle confusion over what, exactly, is going on.

Choosing to follow the central mystery of “Search Party” to its conclusion means riding shotgun with an unreliable protagonist whose mission smacks of pointlessness. Dory is not a detective; she doesn’t possess extraordinary observational skills or a talent for keen analysis. She’s simply lost, aimless and a little bit bored, in the way that young adults often can be.

As such, every clue Dory finds becomes a coincidental addition to her diversionary fantasy. Dory is open to every possibility and clutches at each thread of evidence offered to her, feeding a hobby that gives her life some meaning beyond acting as an errand girl for a woman with too much money (Christine Taylor). Some of the places to which she ventures and the people she meets along the way (portrayed by stars such as Parker Posey, Ron Livingston and Rosie Perez) are kooky and perhaps verging on dangerous.

Shawkat lends her character an innocence and naiveté that buys some patience for Dory. Besides, she isn’t all that terrible in comparison to her vapid friends Portia (Meredith Hagner) and Elliott (John Early), both of whom she enlists in this expedition.

Every character in the show exists in a state just shy of truth. Dory’s boyfriend Drew is an intern, so, like her, he doesn’t have a “real” job. Portia is an actress, able to gin up tears on cue; very little about her is outwardly honest.

And Elliott? He’s a self-promoting narcissist; upon Dory mentioning Chantal’s name at brunch, Elliott responds unkindly: “She sucked. She had nothing to offer. She was always brushing her hair in public. It’s like, brush it at home, please!”

The moment Dory reveals their college acquaintance has gone missing, he glibly tweets, “In shock. Sad news about a sweet girl. Keep an eye out people.”

It is significant that “Search Party” joins the schedule at the end of 2016, a year that began with loud, public mourning for David Bowie and Prince, and is ending with debates over whether wearing safety pins as a sign of solidarity toward communities under threat is a meaningful act or little more than an accessory meant to aggrandize the wearer.

This year has stirred up a lot of extreme emotions, few of them positive.

But watching “Search Party” may prompt reflection about how unreasonable it is to expect real empathy from people who eagerly embrace digital alternatives to actual bonding with living people in the real world.

It would be easy to write off our widespread tendency toward tragedy appropriation as a uniquely millennial affliction, born out of measuring a person's worth by the size of her social following. It’s not a mistake that “Search Party” is centered upon a group of privileged Brooklynites in their 20s.

But this behavior crosses generations. We saw it in the collective wailing following the deaths of Princess Diana and Kurt Cobain. It partly fueled the decades-long obsession with the murder of JonBenét Ramsey.

British journalist Patrick West even wrote about this concept way back in ancient times — 2004, long before Facebook, Twitter, Snapchat and Instagram. “Such displays of empathy do not change the world for the better,” West observed. Instead, he continued, “Our culture of ostentatious caring concerns… projecting one’s ego and informing what a deeply caring individual you are... is about feeling good, not doing good, and illustrates not how altruistic we have become, but how selfish.”

In the scene where Dory confides in Julian regarding Chantal, he ends their conversation with a hard truth: “I think you’ve decided that this matters to you because you have nothing else.” That notion informs the payoff of “Search Party” in a fresh, shocking way that’s not particularly comedic. In a week that has little in the way of new TV content on the schedule, watching the events leading up to that denouement offers a unusual holiday trip. Fortunately for us, it's one worth taking.