The wolves of Wall Street: Trump's Treasury contenders — what big teeth they have . . .

Judging by who Trump is considering for Treasury secretary, Wall Street banks could have unprecedented influence 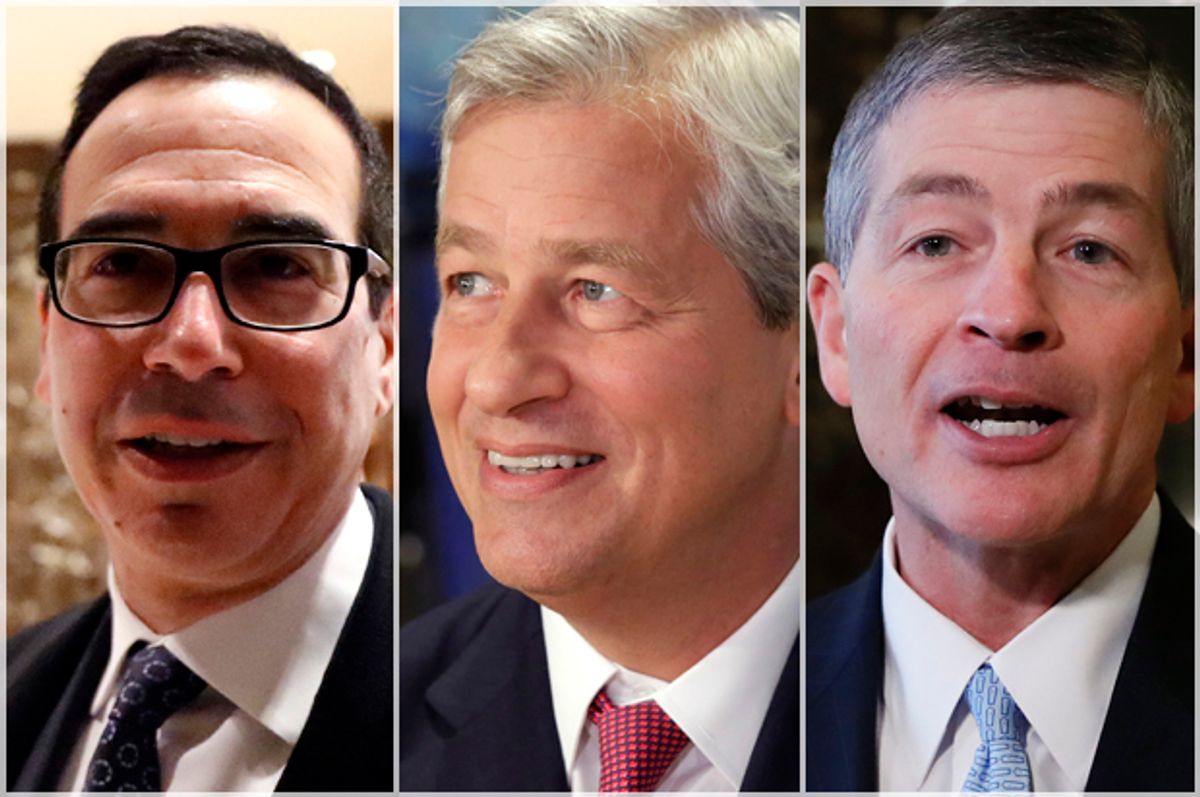 Donald Trump may have sounded like an economic populist to his voters during the presidential campaign, but his administration is shaping up to be the best thing to happen to Wall Street since the Roaring '20s, that regulation-free era that preceded the Great Depression. And we know how well that worked out for the nation.

“You would have to go back to the 1920s to see so much Wall Street influence coming to Washington,” said Charles Geisst, a Wall Street historian at Manhattan College. “It’s the most dramatic turnaround one could imagine. That’s the truly astonishing part.”

It’s a little scary when historians are saying that the major Wall Street banks had even less power in Washington during our recent period of deregulation, which spanned the presidencies of Bill Clinton and George W. Bush, than they probably will have over the upcoming four to eight years of the Orange Reign.

And it is also a remarkable turnaround since Trump spent so much of his general election campaign bashing Hillary Clinton for her ties to Wall Street. This came after a bruising Democratic primary in which Bernie Sanders bashed her for the same reason. Sanders’s popularity and Trump’s win, the pundits said, indicated an ascendant populist mood in the country. The fact that, in Trump’s case at least, said populism was a distraction meant to keep his fans from noticing that he would be restoring all the old Wall Street thieves and lackwits to prominent positions in Washington was duly noted by liberals but did not break through to enough voters. Or if it did, they did not care.

Trump, of course, is spinning his economic plans as the responsible way to unleash the great power of the American economy. From his transition website:

Federal policy should focus on free enterprise, while protecting consumers by policing markets for force and fraud. Both Wall Street and Washington should be held accountable.

To hold Wall Street accountable, Trump has been looking to name a Treasury secretary who will do anything but. JPMorgan CEO Jamie Dimon has been in the running and according to CNBC he's pitching hard for the gig — what wolf wouldn't to get into the sheep pen?

Right now, however, the top contender is said to be another wolf: Seth Mnuchin, a longtime Goldman Sachs executive and hedge fund manager. Mnuchin was recently the CEO of a regional bank, OneWest, which was previously known as IndyMac. The bank was one of the major players in the foreclosure crisis during the Great Recession and is accused of fraudulently foreclosing on thousands of homes, particularly those owned by seniors and low-income minorities who did not have the resources to pursue legal recourse.

Mnuchin, by the way, is not a fan of the Dodd-Frank financial reform act signed by President Barack Obama, which was intended to rein in some of the banking practices by which Mnuchin made his fortune. Since one of Trump’s goals for the entire campaign has been the repeal of the Dodd-Frank act and because the deregulation-happy Republicans who control Congress share that goal, you can expect that legislation, signed in 2010 in response to the banking excesses that brought on the Great Recession, to disappear into the mists of history once Mnuchin is confirmed.

Trump is also said to be considering Rep. Jeb Hensarling, a Texas Republican, for Treasury secretary. If Hensarling does not get the job, he’ll still be a valuable ally. He chairs the House Finance Committee and champions something called the Financial CHOICE Act, which would act as essentially a repeal of most of Dodd-Frank’s more restrictive measures. Though now that Trump is in office, maybe he’ll just chuck the act (whose acronym stands for Creating Hope and Opportunity for Investors, Consumers and Entrepreneurs) and help dispense with Dodd-Frank altogether.

In other words, the Trump administration is setting itself up to roll back the hard-won financial regulations put in place after the Great Recession, which could unleash the financial monoliths of Wall Street whose reckless actions brought it about in the first place. And Trump will do so quickly, likely as fast as Senate Majority Leader Mitch McConnell and House Speaker Paul Ryan can push legislation through Congress.

Congressional Republicans are also likely going to use this new business-friendly atmosphere to destroy or at least hamstring the Consumer Financial Protection Bureau, the baby of Sen. Elizabeth Warren, who helped set it up in 2010 before her run for the Senate. Republicans have been gunning for the CFPB, which helps protect consumers from predatory businesses. According to The Huffington Post, the CFPB has found redress for 27 million consumers to the tune of nearly $12 billion in its short history.

The GOP now plans to rein in the CFPB, possibly by naming recently retired Rep. Randy Neugebauer, R-Texas, to run it. Neugebauer, who like Hensarling has ties to the payday loan industry, has long opposed the CFPB. So putting him in charge of it is the proverbial case of the fox guarding the henhouse.

Considering that Trump spent his entire campaign taking on the mantle of the economically downtrodden common man, destroying the CFPB would seem to be at odds with the populist wave that allegedly swept him into office. But there is no reason to think he’ll fight Congress on this or stand up for the type of consumers the agency has helped. Why would he? His entire business history is replete with examples of him screwing over working people.

If the Wall Street powers that are already cashing in on Trump’s administration have their way, his voters will soon discover just how much snake oil they bought with their votes. Whether any of them will care is a whole other question.