Our greatest poet died just before Election Day; it felt like an omen, and it was. Do you want it darker? 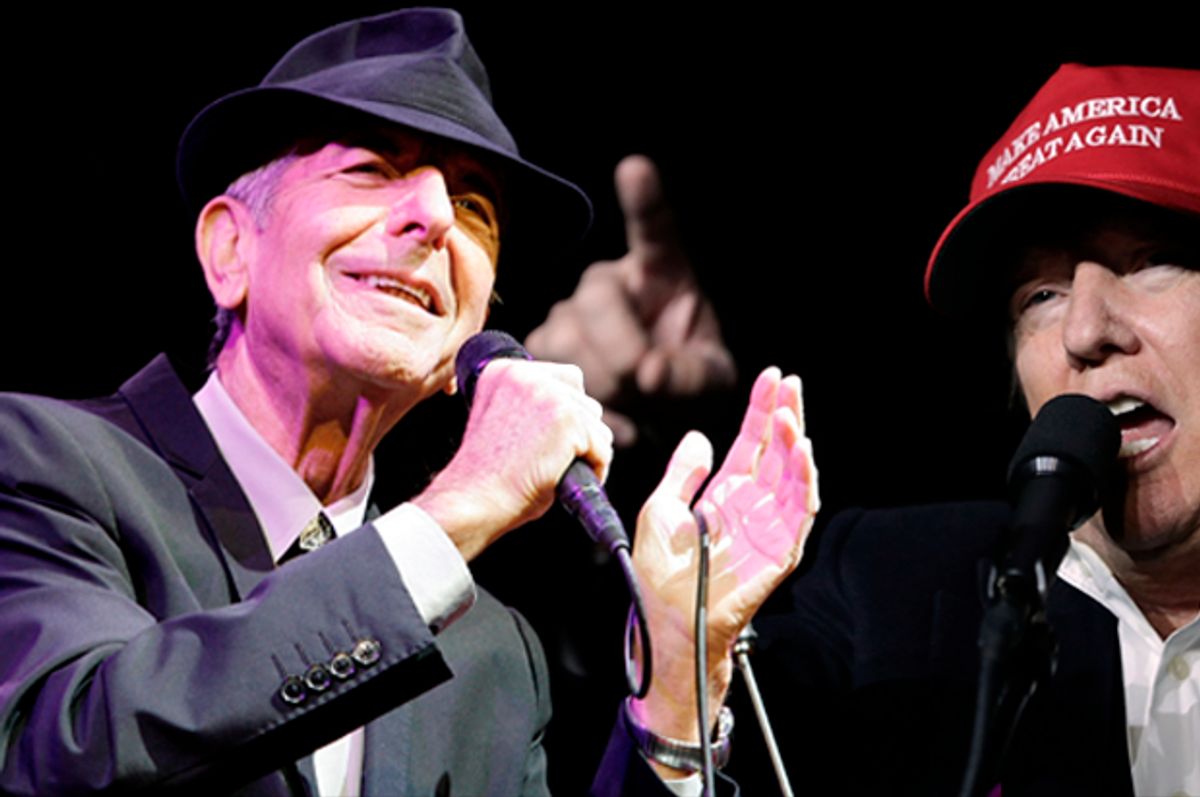 Leonard Cohen, one of our greatest poets, died on Nov. 7 and was buried three days later, next to his parents in a cemetery in Montreal. The cause of his death was leukemia. The likely cause of the leukemia was a lifetime of smoking. In keeping with his instinct for self-effacement and regard for public dignity, his close family and friends didn’t announce his death till after his funeral. That they kept their secret three whole days bespeaks a loyalty to him and one another that nowadays is rare.

When Cohen made his haunting final album, he knew his death was not just approaching, but imminent. Physically spent, he recorded some of the vocals at his home. Knowing all that adds pungency and even a bit of his trademark irony to songs like the title track, "You Want It Darker." It takes more than words to make a poet. The essential trait is a fierce honesty on the page, which itself demands courage of the sort he displayed in bequeathing us this final gift.

Many regard Cohen, Bob Dylan, Paul Simon and Stephen Sondheim as the preeminent lyricists of the last half century; some say longer. Sondheim writes mostly about romantic love. Cohen, Dylan and Simon write a lot about romantic love, but also about spiritual longing and social injustice. Only Cohen writes about all three in the same song.

As we saw in the fuss over Dylan’s Nobel Prize, some people still view lyricists as lesser poetical beings. But of all the modern poets I know, only W.B. Yeats, a strong early influence on Cohen, wrote of the romantic, spiritual and political with as much power and penetration as Cohen. And not even Yeats revealed their intimate connection as Cohen did. "Democracy" is but one of many Cohen lyrics that connect the spiritual to the political:

No other lyricist so commingled the spiritual and the sensual. I’m not sure who else even tried. Cohen saw the divinity in desire, and conveyed it in exquisite images, as here in "Hallelujah":

Your faith was strong but you needed proof
You saw her bathing on the roof
Her beauty and the moonlight overthrew you
She tied you to a kitchen chair
She broke your throne, and she cut your hair
And from your lips she drew the Hallelujah

Nobody beats Leonard at rendering the heartache of losing at love. Well, maybe Johnny Mercer, but not even Mercer could match the psychological acuity and merciless self-awareness of "Alexandra Leaving":

It took critics a while to notice that beneath Cohen’s near-ostentatious melancholy lay a wry humor and deep love of life. Poets are in the business of calling our attention to the sheer wonder of our day-to-day lives. In Cohen's early hit "Suzanne," the line "She brings you tea and oranges/ That come all the way from China" refers to a cup of Constant Comment. Knowing that makes the tea taste better. When I heard that Leonard had died, a thought flashed in my mind: Perhaps the reason we all must die is that there’s just no other way of getting us to appreciate the sacredness of life.

By happenstance, I learned of Cohen's death on Election Day, but could tell no one. It felt a burden and seemed an awful omen, which of course it was. But the isolation of keeping a secret is as nothing compared to the sense of isolation that befell millions that night. I fear many will now abandon politics in search of other ways to heal the world and themselves. It’s hard to see a road ahead. Much of what we must now do, we must do on faith.

Years ago, I saw a poster hanging in a union hall that read, “Every hour of every day you are in politics.” Every hour of every day we are also in love, and in need of love. If you’ve ever lost a lover or a country, listen to Leonard Cohen, poet laureate of the crestfallen, and learn how our longings, appetites and aspirations are all bound up in one another. We need a more loving politics, but also one that’s more clear-eyed and practical. Leonard had a plan for that too. First, we take Manhattan.