Faced with a Donald Trump presidency, the privileged elite vowed to flee the utter Democratic collapse they caused 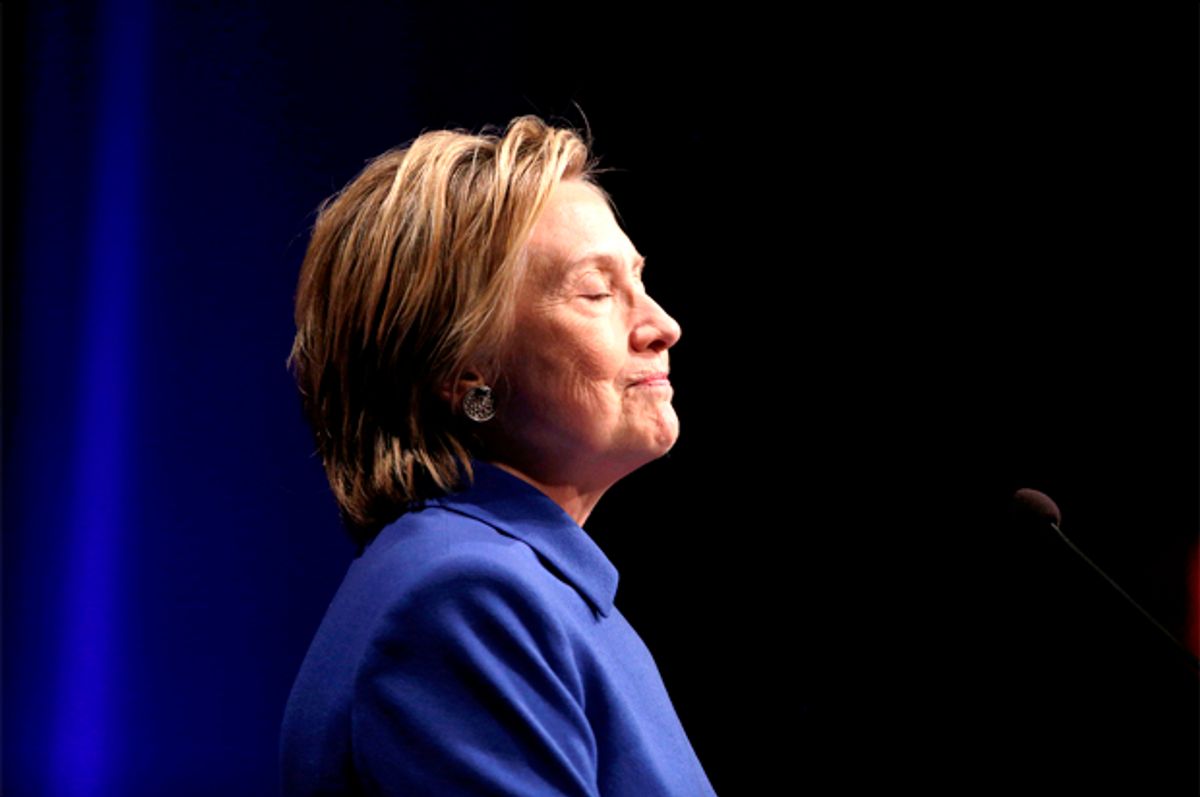 By the time last week’s presidential election was finally called for Donald Trump during the wee hours of Wednesday morning, the initial disbelief felt by the millions of Americans who had been assured of a Clinton victory by the media had turned into shock and panic — if not yet full-blown despair. As pollsters collectively changed their predictions and news pundits started to resemble confused and dejected children, the fight-or-flight response kicked in for countless viewers. Hearts pounded, stomachs turned and some of the more privileged liberals started seriously considering whether to flee the country in the face of a national nightmare that had just become a reality (privileged, because the average American doesn’t have the resources to just pack up and run at will).

The surreal night concluded with Canada’s immigration website crashing from too much traffic, as if every alt-right Twitter troll's fantasy had come true.

Although the instinct to flee from a Trump presidency is understandable, it reveals a great deal about the impotence of modern liberalism and its monumental failure to stop an unhinged and thoroughly unqualified demagogue like Trump.

Elite liberals who vowed to leave America if Trump was elected, which includes a slew of celebrities, are those who would be most insulated from the impact of a Trump presidency — unlike working people and seniors who stand to lose their healthcare, children of immigrants who may soon see their families torn apart, or poor people of color who could face heightened persecution under the already racist criminal justice system. Sadly, fleeing is not an option for the most vulnerable Americans. Their only option is to keep fighting; yet the first impulse that many of their professed allies felt was to do the exact opposite: to escape.

Of course, most of the “limousine liberals” who promised to leave America before the election didn’t actually believe that Trump could win. It was an impossibility. Not in their wildest dreams could the racist, sexist, misogynistic and xenophobic buffoon defeat the most qualified and deserving presidential candidate in history — no less the first women candidate. He had denigrated women, scapegoated minorities and immigrants, offended veterans and mocked the disabled. Not only that, but it was her turn! “It was supposed to be her job. She worked her whole life for the job. It's her job,” wrote Clinton surrogate Lena Dunham (who had said she would move to Canada if Trump won) in a recent article recounting her grief-stricken reaction to the election, in which she admitted she “never truly believed” that Trump could win.

Besides all this, Clinton had received all the coveted endorsements — the editorial pages of every major newspaper, the biggest celebrities, the neoconservative intellectuals, the former presidents and statespersons. The Washington establishment was clearly with her. And then there was the Democratic Party’s supposed secret weapon: demographics. How could a candidate running on white-identity politics possibly win in an increasingly diverse country that had elected Barack Obama just four years before?

These liberals were borderline delusional — a delusion evinced by Chuck Schumer, the establishment senator from New York who was hoping to become majority leader, but has had to settle for minority leadership. “We’re going to have a Democratic generation. [President Obama] helped create it. But it’s just where America’s moving demographically, ideologically and in every way,” said the senator in an interview with Politico Magazine during the Democratic National Convention last summer. In July, Schumer made another rosy prediction at a forum hosted by the Washington Post: “For every blue-collar Democrat we lose in western Pennsylvania, we will pick up two moderate Republicans in the suburbs in Philadelphia, and you can repeat that in Ohio and Illinois and Wisconsin.”

Turns out it was blue-collar voters who made all the difference. Trump won white voters without a college degree by a whopping 39 points, compared to Mitt Romney’s 26-point win in 2012. And in the industrial North (Michigan, Ohio, Wisconsin, Minnesota, Iowa), where the blue-collar vote went to Obama in 2012, Trump made huge gains and won decisively.

Demographic optimism proved to be the Democratic Party’s undoing. And it wasn’t just because of the white working class; according to exit polls, Clinton received six points less of the Hispanic vote than President Obama did in 2012, while the black and 18- to 29-year-old votes both both dropped by 5 percent.

Trump’s victory was a rude awakening for Democrats who have become all too complacent within the Washington power structure, and who mistakenly assumed that changing demographics, identity politics and sheer celebrity would be enough to stop the right-wing populism of Trump. Trump didn’t win the election because of a Republican insurgency; he won because of a Democratic collapse. He won because neoliberalism failed.

And now, as we enter a terrifying and uncertain new period in American history, the last thing liberals should do is double down on the failed politics that allowed this tragedy to occur. The Clinton campaign tried to make this election all about Trump’s hatefulness (“Love Trumps Hate”) and his “basket of deplorables,” while offering no real vision of progressive and populist change. And when those on the left raised legitimate concerns about Clinton’s uninspiring message or her political baggage during and after the primaries, they were ridiculously labeled sexist or racist “bros” by establishment figures (even though some of Clinton’s harshest progressive critics were in fact women and people of color). In a February essay, former Salon writer Daniel Denvir described this cynical political strategy in Salon as “peak neoliberalism, where a distorted version of identity politics is used to defend an oligarchy and a national security state, celebrating diversity in the management of exploitation and warfare.”

Of course, there is no doubt that the Trump campaign has rejuvenated racism and sexism in America, and no one can call themselves progressive without tirelessly combating any and all bigotry. But there is a difference between a Trump “supporter” and someone who reluctantly voted for the Republican because of their distrust or dislike of Clinton, or because he or she truly believed the billionaire could bring change to Washington (according to exit polls, “can bring needed change” turned out to be the most important candidate quality for four in 10 voters, and 83 percent of them voted Trump).

If Clinton’s “basket of deplorables” comment accomplished anything, it was to push away irritated or bitter voters who are tired of being called Islamophobic when they criticize radical Islam or racist when they contemplate voting Republican. Consider a reader over at the Atlantic, who started in the “NeverTrump” camp and claims to still “deplore” the president-elect, yet ended up voting for him anyway. His reason? What he views as left-wing identity politics run amok. “Accusations of racism are being thrown about as political weapons (mostly by white liberals) in a way that belittles the seriousness of bigotry,” writes the reader, who is white but married to a Mexican-American. “When everything is about identity politics, is the left really surprised that on Tuesday millions of white Americans, for the first time ever, voted as 'white'? If you want identity politics, identity politics is what you will get.”

The repugnant white identity politics and faux populism of Donald Trump must be repudiated and defeated; but it is now clear that only a Democratic Party that advances a strong populist vision of universal economic and social justice stands a chance at accomplishing this. Former Secretary of Labor Robert Reich has called on the party to return to its roots and become the party of the people, rather than the party of the professional elite and donor class.

“The Democratic Party as it is now constituted has become a giant fundraising machine, too often reflecting the goals and values of the moneyed interests. This must change,” observes Reich. “The election of 2016 has repudiated it. We need a people’s party — a party capable of organizing and mobilizing Americans in opposition to Donald Trump’s Republican Party… What happened in America Tuesday should not be seen as a victory for hatefulness over decency. It is more accurately understood as a repudiation of the American power structure.”

Of course, the American power structure will not change under Donald Trump — in fact, the corruption and divisiveness will only intensify and the plutocratic class will only grow fatter. The millions of working-class Americans who voted for Trump over Clinton hoping that he would clean up Washington, bring back jobs and unite the country will be sorely disappointed. In two months, Trump and his GOP will officially become America’s governing party — the establishment, that is — and every single problem this country faces will become their responsibility. And make no mistake, Trump and the Republican majority will be an utter disaster (the real uncertainty is just how painful this disaster will be for working people, minorities, immigrants, etc.).

By the time Trump is up for reelection, the supposed populist outsider will have become the establishment insider, and the broken and divided state of the nation will be his responsibility (though he will no doubt find a way to blame Obama for everything). This will present a golden opportunity for Democrats to come back strong as the anti-establishment ticket and do what should have been done in 2016: stomp out Trumpism once and for all. But the party’s ability to do this will hinge on what it does over the next several years, and whether liberalism can return to its fighting roots.