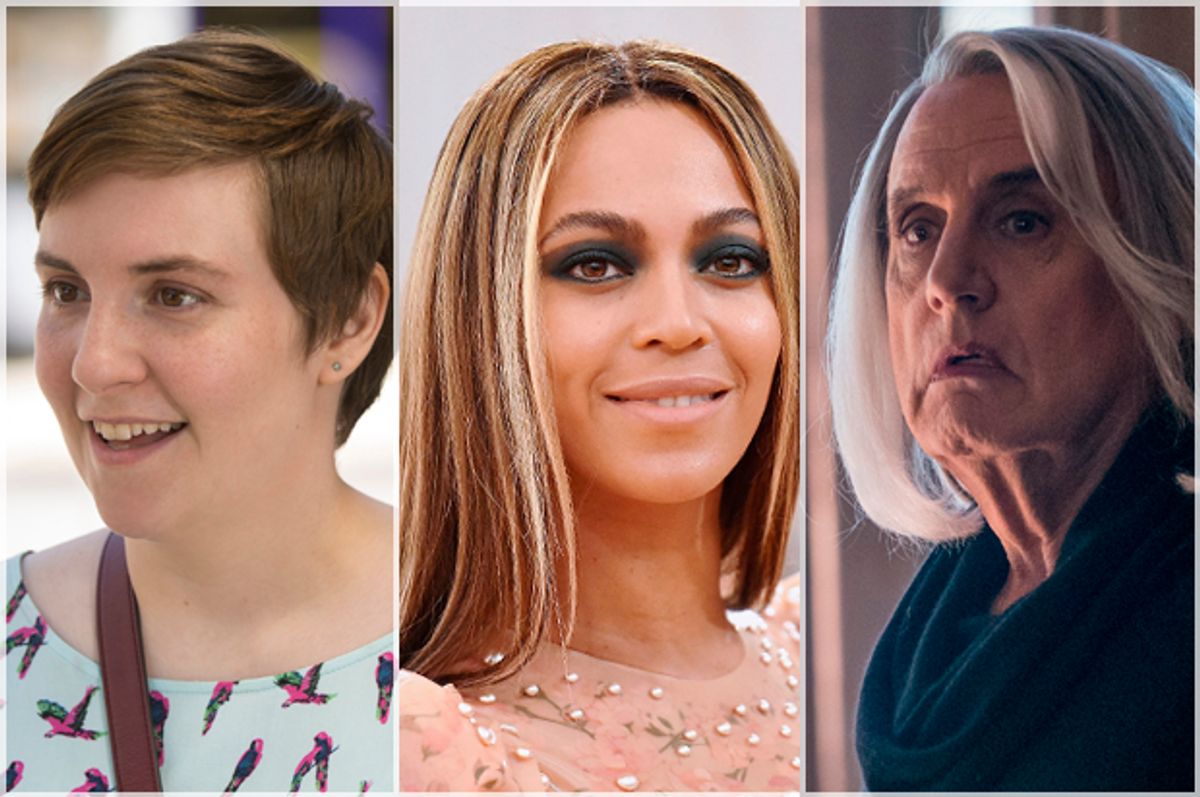 A cursory glance at the last decade’s cultural output would seem to suggest a recharged Hands Across America, each palm a different size and shade, the grip of women and the queer community firmer than ever. In music, Nicki Minaj sounds off (again) against sexism in hip-hop. On television, there’s “Glee,” “Broad City,” “Orange Is the New Black,” “Transparent,” “Empire,” “Jane the Virgin,” “Fresh Off the Boat,” “Girls,” “This Is Us,” and of course the massively popular “Modern Family” — normalizing not only gay households but mixed-race and adoptee families (and bagging 22 Emmys along the way). In film, despite — and in part because of — the righteous ire of #OscarsSoWhite and feminist whistleblowers like the Bitch Pack, conversations about racial and gender inequities have perhaps never been so public. Disney’s record-breaking “Zootopia” explored the dangers of racial profiling. Leonardo DiCaprio co-produced a documentary about climate change.

And of course there’s the fact that our country not once, but twice, elected an African-American president — a leader who, one once had the audacity to hope, would stabilize the economy after the Great Recession, unite a citizenry demoralized by two wars abroad, and then pass the baton to a former rival who’d then shatter the glass ceiling.

A little over a week ago, with pant-suited patriots posing at the polls and national pundits forecasting victory, it seemed the future would not only be female, but as proudly colorful as the Pantone flashmob pirouetting across Union Square.

Then we woke up.

“The dream of diversity is the same as the dream of equality,” wrote conservative David Brooks in his 2003 “People Like Us,” a corrective to well-heeled liberals who talked the talk but never interacted with those unlike themselves. Thirteen years later, the same Brooks who once claimed “it is not useful to try to hammer diversity into every neighborhood and institution” has this week elegized the death of American decency in light of Trump’s win. “We are a far more divided society than we realized… with [Trump’s] penchant for cruelty, bigotry, narcissism, selfishness and even his primitive primate dominance displays, he has shredded the accepted understandings of personal morality that prevent the strong from preying on the weak,” Brooks wrote.

For one, our delusions of progressiveness in the mainstream were exactly that: bromides at the box office, milestones at an awards event or multiplex marquee. For as forward-thinking as it’s easy to feel, just as many of us succumbed to phantasms of inclusion that lacked widespread public support. When 52 percent of white women vote for a candidate accused of groping women, who lobs gendered insults at women so freely that Fox’s own Megyn Kelly called him on his part in the “war on women,” it highlights how differently many women in this country apparently think about pussies and grabbing in the first place. Sylvia Plath wrote “Every woman adores a fascist” in 1962, but who knew it would ring halfway true half a century on?

It is also worth asking how many succumbed to fantasies of power so as to presume their civil liberties would be guaranteed no matter who’s in the White House, those like the Trump voter and Wisconsin hockey mom who say they’d “just like to see something change” in the abstract, something that “Democrats just couldn't get… done.” Many others had faith that Trump might just yet save their job or factory — white blue-collar workers who’ve felt, quite justifiably (along with a great many people of color), elided in our current economy, and long ignored in popular culture.

Popular culture — and popular press, as I’m humbly coming to grips with — has always distorted reality, but never before has such a profound disjunction between the media and national values proved so gut-wrenchingly clear. Many on the left are incredulous at our former credulity — and we should be. That said, this is not an apology for offering or endorsing a vision of society that millions strive for every day. Greater efforts toward inclusion should be commended — and continue — as they not only serve to represent a growing number of Americans watching, but can also combat the tepid tokenism of the past. And then there’s the fact that we’ve a lot more work to do in accurately reflecting our population — one recent study on the “epidemic of invisibility” in Hollywood found that out of 400 films and TV shows released from 2014 to 2015, only a third of speaking characters were female, and only a quarter of characters with dialogue were not white.

But we should also take care not to overestimate the extent to which a more diverse, proto-feminist popular culture reflects the ethos of the country at large; and we should not assume that inclusive media automatically mollifies anxieties or misconceptions toward cultural others. I suspect this is because the liberals of the creative class — of which I count myself part — have become ever more estranged from these populations. Many of my affluent undergrads have assumed that “working class” means “those who work,” happily citing their optometrists and lawyer parents as members of the club.

And that makes sense. After all, how much of popular media even attempts to accurately and respectfully convey the realities of the working, or middle, classes — of any color? Where are shows depicting funny, likeable working-class folk like “Roseanne,” “Family Matters,” “Malcolm in the Middle,” “The Jeffersons,” or “Sanford and Son”? Where are programs exploring the ideological tensions that can divide a home — like “All in the Family?” Why is David O. Russell practically the only major director to occasionally highlight the lives of the working class (and with often a toxic neoliberal bent)? The extent to which fantasy and Marvel have gobbled up visual media further suggests just how eager Americans are to escape a real world in which we seem to have less and less in common with each other.

In “People Like Us,” Brooks advises that “it’s probably important for adults to get out of their own familiar circles,” suggesting that liberals “take out a subscription to The Door, the evangelical humor magazine,” visit Branson, Missouri, or drop by a megachurch. But I agree with Bust’s Priya Jain that blaming progressives for being out of touch is not the best way to move forward:

I am sick of being told, as I have my whole life, that middle America is the “real” America, and we “urban” elites just don’t get it because we don’t live there. As if that were our choice. As if we could just live our brown lives, our black lives, our queer lives, in the middle of Trump country. As if that were a safe thing to do.

Instead, maybe we can reach out to those who may share our values and feel geographically alienated. Not all liberals can commiserate with puffy-eyed urban passersby and safety-pinned pedestrians. Prompted by my own election ennui, I connected with a cousin my age living in rural Missouri, who, I came to find out, was the only person in her entire building to vote for Clinton. On November 9, her teenage daughter — a soccer star and intrepid deer hunter — wore black to commemorate Hillary’s loss. She idolizes African-American suffragette Mary Church Terrell, and plans to someday teach at the university level after attaining her PhD in history.

Let’s just hope that next time we don’t repeat ourselves.