Trump shock — We've been there, done that: Coping lessons from a #NeverTrump conservative

Six months before liberals, #NeverTrump Republicans had come to terms with the power of the Trump phenomenon 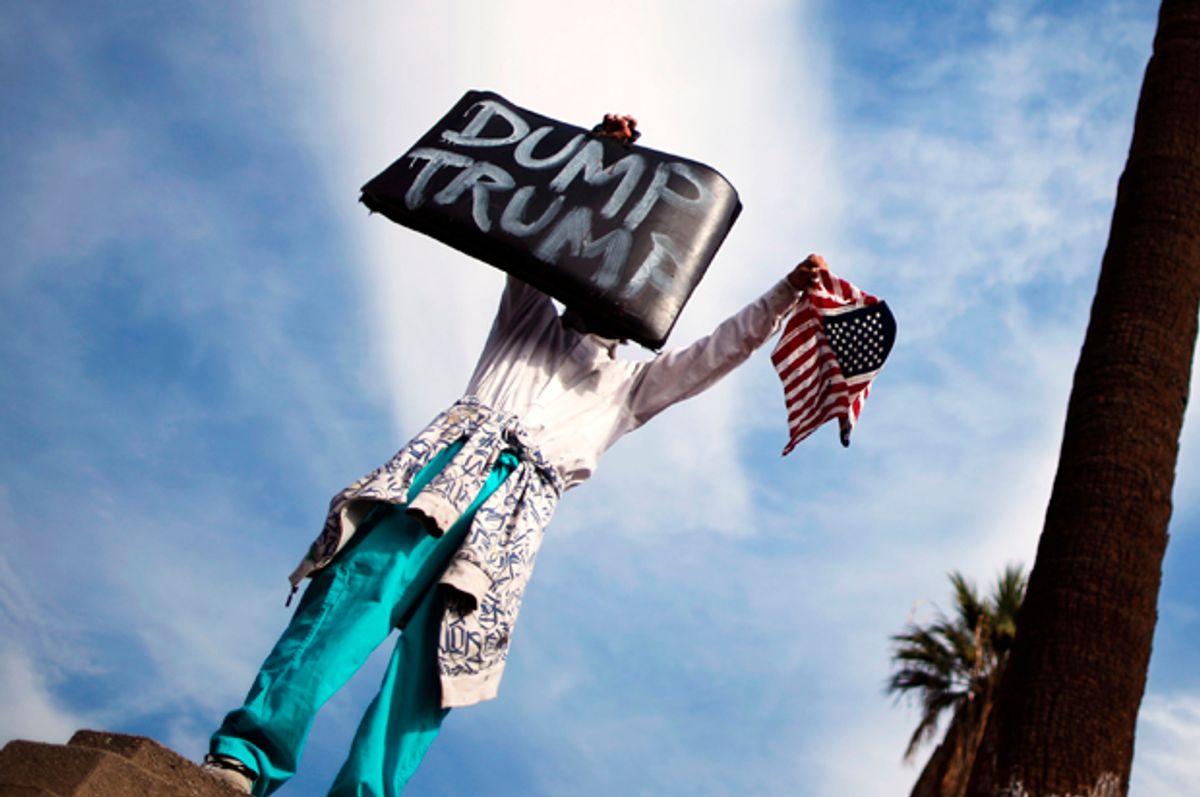 As Election Night unfolded, I felt like an island of calm and clarity amid a sea of colleagues who were variously angry, distraught and rattled as the prospects of a Donald Trump victory went from possibility to probability to fait accompli. I wasn't in denial (another reaction shared by some at the Salon offices); in fact, I understood their shock and dismay better than they knew. As a conservative who was both #NeverTrump and #NeverHillary, I knew I wouldn’t be thrilled with either outcome. But I’d had six months to process the possibility of Trump winning the presidency after he won the GOP nomination, and if anything, the outcome of the election ushered in relief. We finally have clarity on who our president will be, even if we have little idea about what kind of president Trump will be.

It’s been fairly easy for many conservatives to rapidly switch to support post-election Trump, to wish his new administration well after 18 months of full-throated opposition. George H.W. Bush, George W. Bush, Mitt Romney, Ben Sasse, Mike Lee, Bill Kristol and a whole parade of other #NeverTrump Republicans pivoted quickly and jumped aboard the Trump Train. It took time for this to come about. We #NeverTrump conservatives were taking a cue from Trump’s victory night song, the Rolling Stones’ “You Can’t Always Get What You Want,” and its all-important theme of consolation: "But if you try sometimes well you might find / You get what you need."

For liberals, their clocks cleaned and heads still spinning, what they need is a period of self-reflection on how they lost the working-class vote — advice that comes not from me or Mick Jagger and Keith Richards, but President Obama.

But the truth is that liberals could learn some lessons from the #NeverTrump conservative crowd. After all, we’ve had much longer to grapple with Trump, triumphant, dashing our hopes and dreams. For six long months, we've been there: We have have decried every Trump gaffe, afraid that he will smear our good standing by forever associating us with some of the darkest dregs of society. We have wrestled with the possibility that he would forever damage the fabric of American society, unleashing even more polarization and possibly triggering race-based violence. We have worried that Trump's ascension would spell the demise of the American experiment. So far, our greatest fears have not been realized; the transition period seems to be relatively smooth. Word on the street is that Trump is even considering Mitt Romney for Secretary of State, and Republican Sen. Mike Lee, who said he voted for independent presidential candidate Evan McMullin, is apparently still on Trump’s short list for the Supreme Court. Trump himself doesn’t appear to be holding grudges.

Another coping mechanism that's been helpful for me as a #NeverTrumper: Imagine your mother wanted to remarry and she'd been courted by 16 other suitors before choosing the one you couldn’t stand — the bombastic one with a checkered past, broken marriages and a foul mouth. Six months ago they got engaged, and last week they tied the knot. Sure, it might not last and they might divorce — but not for four years. So you can either spend that time being a petulant stepchild trying to break up the marriage or you can attempt to understand the new family member. You will try to do the latter because your mother loves him. And you love your mother.

It’s not all on you, of course. Many millions of Americans are feeling uneasy and on edge in the wake of Trump’s victory, and their anxiety should be addressed (as Trump tried to do in his surprisingly subdued "60 Minutes" interview). One way to rationally process these emotions was powerfully outlined by Tim LeBon, a stoic psychotherapist based in the U.K. who helped patients deal with the shock of the Brexit vote. I attended a seminar he gave at a conference called Stoicon 2016 on how to face the possibility of a Trump presidency.

LeBon walked us through how to replace our knee-jerk emotional responses to the prospect of a Trump White House — fear, anger — with the kind of responses we need — namely, compassion and empathy. LeBon concluded that a Trump presidency is actually a wonderful opportunity for those who oppose Trump — a training ground to develop and prove themselves and a chance to practice what they preach. If liberals truly believe in diversity and inclusion, that must by necessity mean extending a welcome to Red Staters.

Trump is a shock to the cultural and political system; his staff, particularly Steve Bannon, saw this election through a primal, war-like lens that offended many yet struck a chord with millions of others. This lens reminded me of a letter penned by John Adams to his wife Abigail:

“I must study politics and war that my sons may have liberty to study mathematics and philosophy. My sons ought to study mathematics and philosophy, geography, natural history, naval architecture, navigation, commerce, and agriculture, in order to give their children a right to study painting, poetry, music, architecture, statuary, tapestry, and porcelain.”

Privileged, mocha-drinking, Web-designing, hashtag-loving Brooklynite hipsters are about as far removed as one can be from the opiate-infested broken homes of Rust Belt and rural America. They study the high arts even as their “hillbilly” brothers and sisters are engaged in a more existential struggle.

If nothing else, Trump has popped the bubble of privilege in which so many liberals live quarantined from their “ignorant”and “redneck” compatriots. For many wealthy, elite Rockefeller Republican #NeverTrump types who float through Manhattan and D.C. cocktail circuits, a similar bubble was popped six months ago. Same goes for many of the wonky, Ivory Tower think-tank conservatives forced to rethink core planks of conservative capitalism in the age of technology, automation and offshoring. I’ve worked with many of these people over the years, and in the past six months Trump has caused a fissure among friends on the right. But we were friends before Trump, and now we’re learning how to reconcile our differences.

The same can be true for liberals, who must overcome an even deeper schism on the left. This will be a period of pain, but times of struggle can also bring about profound growth and insight. Holocaust survivor Viktor E. Frankl explains as much in his book "Man’s Search for Meaning," published soon after his liberation from Auschwitz: The meaning of life is the meaning we create. What will be the meaning of Trump’s America? We are all — liberal and conservative alike — privileged with the freedom to create our response.