Who killed the hydrogen car? Nothing except time, overhyped expectations and the viability of electric vehicles 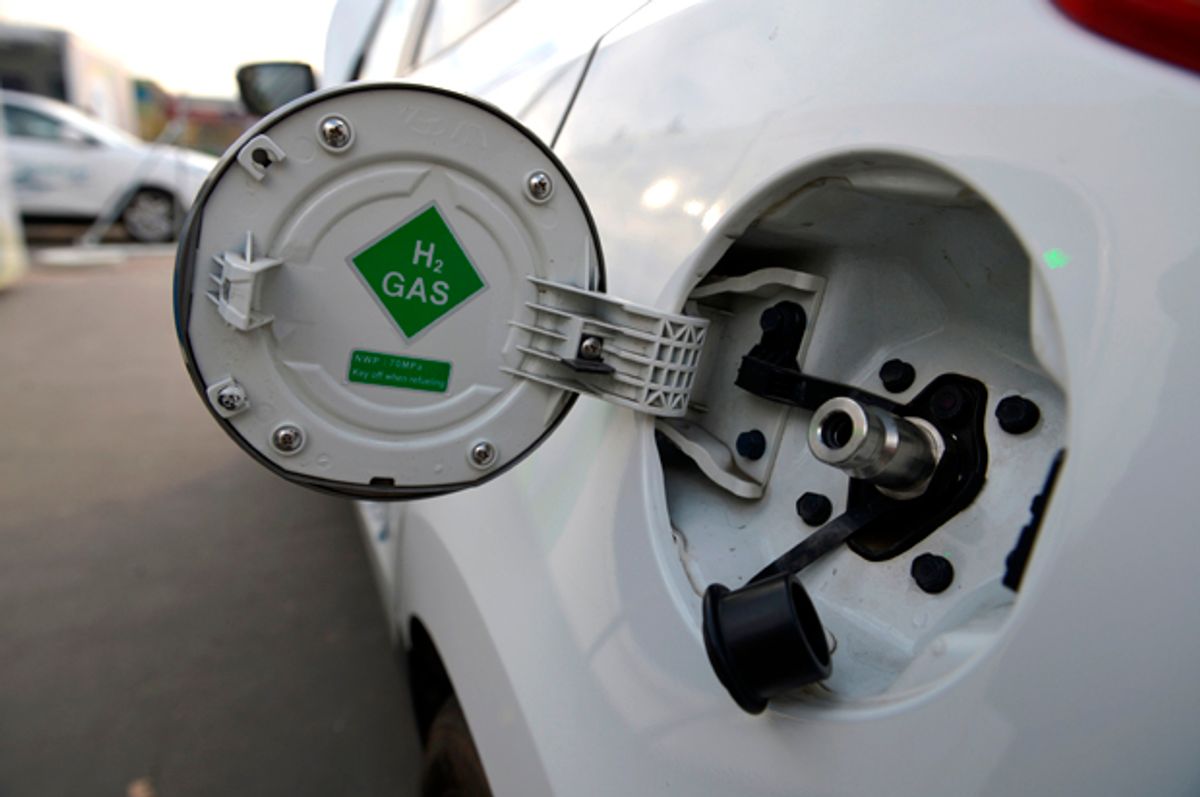 The hydrogen car is like your dream of learning to play the guitar or writing the Great American Novel — you still hope, but as time goes by you can't help but lose faith. After all, it’s been 50 years since General Motors unveiled the first iteration in this automotive frontier, billed as environmentally safe. It’s been 38 years since Jack Nicholson stuck his face against the tailpipe of a hydrogen vehicle for a non-toxic steam facial on national TV. And it’s been nine years since Brad Pitt showed up to the premiere of “Ocean’s Thirteen” in the BMW Hydrogen 7. If celebrity approval and avant-garde appeal were any kind of bellwether, the highways would be full of H-cars by now. So what’s taking so long for these gasoline-free wheels to reach mass-market status?

By now, the need for environmentally friendly vehicles is clear. Yet, according to The Guardian, 95 percent of our transport still relies on oil. Cars and trucks that run on oil-based gasoline account for nearly one-fifth of our carbon emissions, which are driving climate change and creating the mother of all risks to national security. Just one gallon of gasoline produces 19 pounds of carbon dioxide.

The “H” on the periodic table representing colorless, odorless gas hydrogen might as well stand for “help” or "hope." Rather than an internal combustion engine, hydrogen vehicles are equipped with fuel cells that produce electricity by creating a chemical reaction between hydrogen and oxygen. The process is entirely clean — no gas emissions, no toxic byproducts whatsoever. The reaction only produces two things: water and energy. And because we can make hydrogen in the U.S., this fuel has potential to lessen our dependence on foreign sources of oil.

If may sound too good to be true but in fact it's too hard to produce and popularize. And over the years, the best environmentally friendly vehicle possible has been overshadowed by merely good ones, according to Joseph Romm, PhD, a physicist, a Senior Fellow at the Center for American Progress, a former U.S. Department of Energy official, and the author of several books, including “The Hype About Hydrogen: Fact and Fiction in the Race to Save the Climate” and “Climate Change: What Everyone Needs to Know.”

“Hydrogen cars have missed the boat,” Romm told Salon. “This is like Betamax competing against VHS tapes in the ’90s. Once the market decides it’s going one way, the loser is screwed. Hydrogen cars are never going to be a mass-market success now that electric vehicle batteries have crossed the key price point, and continue to drop.”

Indeed, more than 64,000 new electric cars hit the streets during the first half of 2016 alone, while the total number of hydrogen fuel cell vehicles on the road isn’t expected to hit 70,000 until 2027.

For starters, the infrastructure for electric vehicles -- that is, the electric grid -- is already in place, whereas building a network of hydrogen fueling stations, the so-called hydrogen highway, is a daunting task. Just one station can require 36 months of construction and cost $1 million. The cars, too, are expensive to manufacture (those fuel cells require platinum catalysts), which means they’re also expensive to buy. The highest-selling model in the U.S. is Toyota’s Mirai, which retails for $58,365 (though tax rebates cut that back).

Storage is also a major issue. Liquid hydrogen takes up the least amount of space, but it needs to be stored at -427F, and a great deal of energy is required to keep it that cold. Hydrogen is the lightest of all elements -- even lighter than helium -- so it has a penchant for floating away. Additionally, it occupies three times as much space as petroleum, for the same amount of energy. This means a 40-ton truck can deliver 26 tons of gasoline at one time, but only .44 tons of compressed hydrogen.

And though renewable energy could be used to produce hydrogen, in the U.S. 95 percent of hydrogen is made from fossil fuel — so while the end-product is clean, its production is not. Or not yet, anyway.

Still, some experts, like Joan Ogden, an Associate Professor of Environmental Science and Policy at the University of California, Davis and an Associate Energy Policy Analyst and Co-Director of the Hydrogen Pathway Program at the Institute of Transportation Studies, believe the hydrogen car will be at least a part of our transportation mix before long.

“In the future, I don’t believe the automobile industry is going to be a monoculture the way it’s been for the last 100 years,” Ogden told Salon. “I think we’ll see a much more diverse plate, with roles for electric cars, hybrid plug-ins and hydrogen fuel cells.”

Ogden believes there’s enough momentum behind building a hydrogen infrastructure for this to come to fruition. Major rollouts are already underway in Japan, Germany and Korea, with Australia, Norway, Denmark and China close behind. In the U.S., thanks to support provided by 2013’s Assembly Bill 8, 23 fueling stations are open for retail business in California, with 100 expected before 2020. Information from H2USA, the public-private partnership for advancing the widespread adoption of hydrogen cars in America, suggests the Northeast will see the next surge.

True, filling up on hydrogen seems more pricey than with the gas pump (hydrogen is equivalent on a price-per-energy basis to $5.60 per gallon of gasoline), but hydrogen vehicles have a longer range than their alternative-energy competitors -- fuel cell cars can go more than 300 miles in one shot, while the electric car industry is struggling to hit that mark. In the meantime, the National Renewable Energy Laboratory expects hydrogen prices to drop in coming years.

And hydrogen production in the U.S. is getting a lot cleaner, too. California law, for instance, mandates that 33 percent of hydrogen for vehicles has to come from renewable sources, rather than fossil fuel, and experts anticipate this number growing as we decarbonize. Imagine driving on fuel generated entirely by solar power, wind, or biomass (aka animal waste). In Japan, Toyota has even turned to human sewage for a toilet-to-tank scheme that’s a lot cleaner and less gross than it sounds. And in the U.S. there has never been more coordination between stakeholders, consumers, regulators, fuel providers and automakers.

Of course, many people feel like they've heard optimistic projections like that before — because they have. But consider this: There is a reason that, while the high hopes for the hydrogen car have never come to life, they haven't died either.