Harry Reid is right: Donald Trump has no legitimacy until he walks back the vileness

Should we accept Donald Trump as a normal president? Only if he starts acting like one, which isn't likely 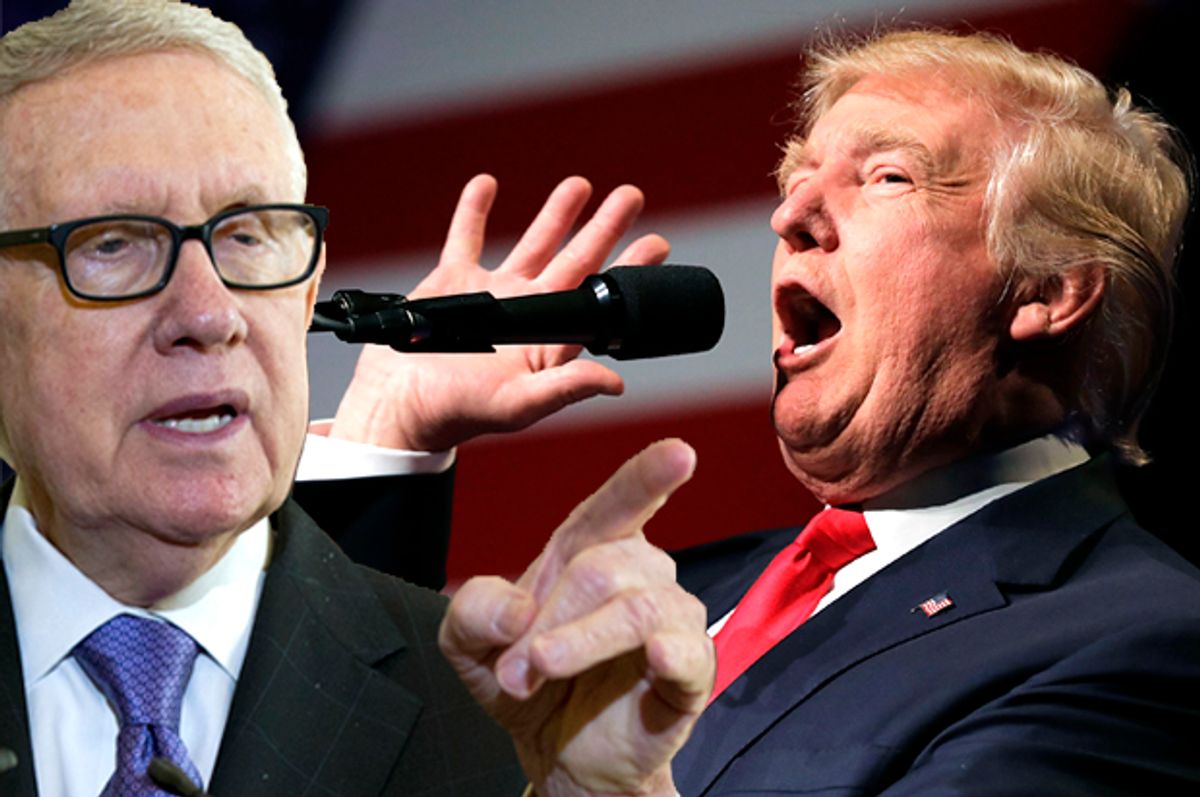 Sen. Harry Reid is right, and he’s been right since his first tweet challenging President-elect Donald Trump, with a blistering press release attached.

“If this is going to be a time of healing, we must first put the responsibility for healing where it belongs: at the feet of Donald Trump, a sexual predator who lost the popular vote and fueled his campaign with bigotry and hate,” the retiring Senate minority leader wrote in the press release, followed by the line he tweeted, “Winning the electoral college does not absolve Trump of the grave sins he committed against millions of Americans.”

Reid is 100 percent right to insist that Trump must act first to repudiate and disavow his past before Democrats treat him as normal in any way. Because he is not normal in any way. Even if Trump did attempt to repudiate the vile campaign that put him in office, that would scarcely make him normal. But at least it would provide some basis on which to begin moving toward public actions in good faith. As it now stands, we are nowhere near being in such a place.

Perhaps because he's retiring from politics, Reid took aim at Trump in a way few other prominent elected Democrats have done, and spoke out loudly on behalf of those Trump has threatened on his way to the White House:

We as a nation must find a way to move forward without consigning those who Trump has threatened to the shadows. Their fear is entirely rational, because Donald Trump has talked openly about doing terrible things to them.

But Reid also called out those who are eager to normalize Trump, and who would once again help him get away with dodging his moral responsibility:

Every news piece that breathlessly obsesses over inauguration preparations compounds their fear by normalizing a man who has threatened to tear families apart, who has bragged about sexually assaulting women and who has directed crowds of thousands to intimidate reporters and assault African Americans. Their fear is legitimate and we must refuse to let it fall through the cracks between the fluff pieces.

While Sen. Joe Manchin of West Virginia, a conservative Democrat, predictably got the vapors in response to Reid (“an absolute embarrassment to the Senate as an institution, our Democratic Party, and the nation"), even the earlier stances struck by Bernie Sanders and Elizabeth Warren had a huge blind spot, compared to Reid. Sanders’ initial statement was two brief paragraphs, the first explaining that Trump won based partly on Sanders’ agenda (“Donald Trump tapped into the anger of a declining middle class …”). The second paragraph consisted of two sentences, one promising to work with Trump on that agenda, the second promising to vigorously oppose him “to the degree that he pursues racist, sexist, xenophobic and anti-environment policies.”

Warren’s response was similar, but with noticeably less spine. It had some good-government blather in the first paragraph about how “the integrity of our democracy is more important than any individual election,” but no clear pledge to fight Trump in balancing her pledge to work with him “to rebuild our economy for working people.” Warren went no further than the bland hope that the president-elect would fulfill his role “with respect and concern for every single person in this country, no matter who they are, where they come from, what they believe, or whom they love.”

Neither Sanders nor Warren seemed to register anything like the personal sense of peril and outrage that Reid expressed on behalf of those truly forgotten and discounted Americans he felt morally called to represent. “I have heard more stories in the past 48 hours of Americans living in fear of their own government and their fellow Americans," Reid wrote, "than I can remember hearing in five decades in politics.”

What neither Sanders nor Warren seemed to grasp (at least initially) was that although it might be OK to take the high road and say you'll work with Trump on infrastructure (or whatever) but fight him on bigotry, that stance only makes sense after he has first admitted to his prior bad acts, and begun making amends for them. Otherwise — consciously or not — they are becoming complicit in Trump's crimes, accomplices in his normalization.

This point was made vividly in a tweet-storm about “gaslighting in the aftermath of the 2016 Presidential Election” (storified here) by Clarkisha Kent (a writer under many names, co-founder of Sublime Zoo, where she writes as Lex Luther). I’ve written here previously about Trump’s gaslighting in his response to the “Access Hollywood” tape, and several others have written about it as well, including Emily Crockett at Vox, Andrea Grimes at the Texas Observer, and Brian Beutler at the New Republic. Liars deceive you about the state of the world, bullshitters deceive you about what they’re up to, but gaslighters deceive about your own sanity -- about your ability to even know when you’re being lied to or bullshitted. Each has a different deceptive focus when they ask you, “Who are you going to believe? Me, or your lyin’ eyes?”

Trump is all three and then some, but when Democrats who’d been calling him dangerously unfit suddenly said, “Oh well,” they were gaslighting us as well, Kent fiercely and eloquently argued. She first gave a definition of gaslighting, augmented by a chilling tale drawn from personal experience. Then she turned to the election, and a quick flashback through 18 months of Trump heaping vile abuse on marginalized folks, while progressives warned what an existential danger his election would be — most notably, Bernie Sanders and Elizabeth Warren. But after the election, she noted, suddenly it all changed. She quoted both Hillary Clinton's “Give him a chance" and Warren saying she had "put aside [her] differences" with Trump. Welcome to … where, exactly? Or, as Kent put it:

So ... we imagined the plans he had to deport us, to jail us, to fine us, to target us, and to inadvertently kill us?

And you're saying our righteous fear and anger are somehow now tantamount to the bigotry of his goonies?

This, ladies, gentlemen, and everyone in between, is gaslighting. This is what it means to be gaslit.

Some may say, “No, no, of course not! That’s not what they meant at all.” But it is what folks are experiencing right now, whether consciously or not, which is why it’s so necessary to call it out. Every act of normalizing Trump simultaneously requires an annihilation of our own sanity and an abdication of our morality.

Normalization is the great enemy, writer and former national security analyst Joshua Foust warned, in presenting a list detailing how abnormal things have become. “The presumption of normality during abnormal times is one of the most powerful weapons the authoritarian has, and that is why it is so important to recognize how profoundly abnormal Donald J. Trump will be as president,” he wrote.

And that’s why Reid was so right to object to that normalization. “White nationalists, Vladimir Putin and ISIS are celebrating Donald Trump’s victory, while innocent, law-abiding Americans are wracked with fear – especially African Americans, Hispanic Americans, Muslim Americans, LGBT Americans and Asian Americans. Watching white nationalists celebrate while innocent Americans cry tears of fear does not feel like America,” he warned. “I have a large family. I have one daughter and twelve granddaughters. The texts, emails and phone calls I have received from them have been filled with fear -- fear for themselves, fear for their Hispanic and African American friends, for their Muslim and Jewish friends, for their LBGT friends, for their Asian friends. I’ve felt their tears and I’ve felt their fear.”

Reid is not alone. We can all feel their tears and fears. We cannot not feel them — unless we ourselves choose to join in and gaslight ourselves. This is what authoritarians always depend on. They never have majority support. Their supporters are always a minority. But the majority disable themselves, denying their capacity to resist. An example of how this works can be found in a chilling excerpt from the 1955 book, "They Thought They Were Free," which describes how German intellectuals in Nazi Germany let themselves be lulled into complacency, as their moral lives were hollowed out from within. Once begun, the logic was inexorable: “Step C is not so much worse than Step B, and, if you did not make a stand at Step B, why should you at Step C? And so on to Step D.”

The trick is not to get started in the first place. Say “No!” to Step A — or better yet, say, “Hell, no!” That is what Harry Reid has done — and kept on doing. Perhaps not as well as Clarkisha Kent would do if she were in the Senate. But he’s doing it far better than anyone else around him.

In the end, however, it’s up to each and every one of us not to surrender our sanity. To refuse to be gaslit, no matter who is doing the gaslighting. There’s an old saying, “If the people lead, the leaders will follow.” The fight against gaslighting, against the great con, against the normalization of this abnormal presidency, can only be won from below, by each and every one of us refusing to be lied to, refusing to have the truth of our lives denied.