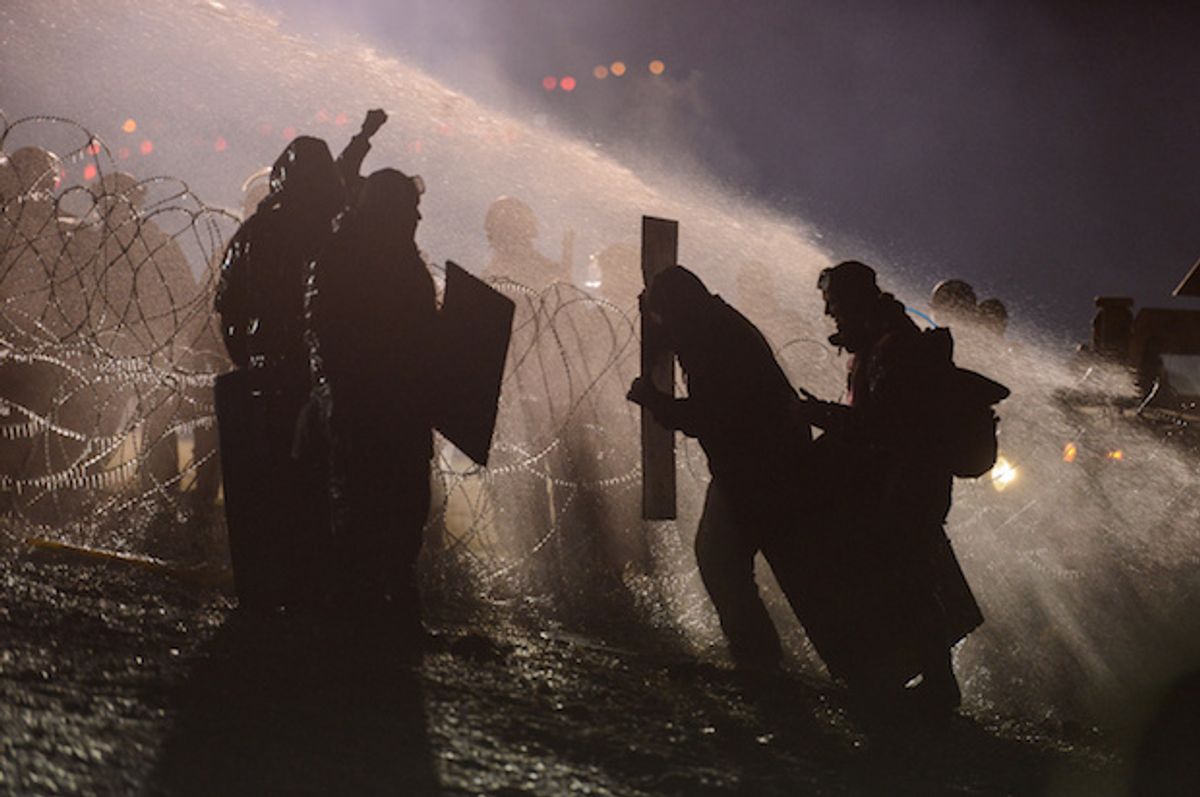 For months authorities in North Dakota have harshly cracked down on protesters challenging the Dakota Access pipeline but over the weekend this reached a new level of violence, when police sprayed activists with water cannons in freezing weather.

Numerous videos posted on social media show the protesters fleeing in terror as authorities shoot water at them in temperatures as low as 25 degrees Fahrenheit, with the wind chill factor making the temps seem at least 10 degrees colder.

Legal observers from the National Lawyers Guild said on Monday that some activists had been shot in the head with rubber bullets. Local indigenous groups have said an elder suffered from a heart attack and had to be resuscitated by medics and noted hat their "camp’s medical staff and facilities are overwhelmed."

The nearly 1,200-mile Dakota Access pipeline was designed to transfer large amounts of crude oil across several states, from North Dakota to Illinois. The $3.8 billion project is being built by Fortune 500 fossil-fuel company Energy Transfer Partners, which is based in Texas.

Local Native American groups like the Standing Rock Sioux tribe have warned that the pipeline, if built, will pollute their water and land, hence they have described themselves as "water protectors." The issue has highlighted the many intersections between the struggles for indigenous rights, environmental protections and racial and economic justice.

Thousands of activists from around the country have joined the protests led by indigenous groups, which use the slogan #NoDAPL, and indigenous groups in Palestine and elsewhere have also expressed their solidarity.

Dallas Goldtooth, of the Indigenous Environmental Network, warned on Monday that the authorities' use of water cannons in the freezing weather this weekend "is an excessive and potentially deadly use of force."

Rights organizations have condemned the authorities' harsh treatment of the protesters.

The American Civil Liberties Union said on Monday that the "indiscriminate use of water cannons by police on protesters at Standing Rock in below freezing temperatures is unjustifiable."

Michael Brune, executive director of the Sierra Club, said the "act of brutality by militarized police is an unacceptable assault on peaceful water protectors exercising their First Amendment rights and standing up for their heritage." The use of water cannons, he said,  is "nothing short of life-threatening and inhumane, making this a disgraceful new low in the ongoing use of force by police."

Huang also called the use of tear gas and rubber bullets "alarming" and stressed that the activists had the right to protest. "The U.S. government is obligated under international law to respect, protect, and fulfill the human rights of Indigenous people, including the rights to freedom of expression and assembly," she wrote.

"Public assemblies should not be considered as the 'enemy,'" she added, alluding to news reports showing that authorities characterized protesters as enemies, using military-like language.

The continued use of riot gear and military-grade weapons and equipment by authorities "to police largely peaceful demonstrations intimidates protesters who are practicing their right to peaceful assembly and can actually lead to an escalation in violence," Huang wrote. "Equipping officers in a manner more appropriate for a battlefield may put them in the mindset that confrontation and conflict is inevitable rather than possible."

Amnesty International USA, which has written a dozen letters to authorities expressing grave concern about the brutal repression of protesters, announced on Monday its plans to send yet another human rights delegation — the fourth since August — to monitor the protests.

On Monday Greenpeace even called on President Barack Obama to intervene.

"It is clear that the militarized police response has completely disregarded the protection of human life," Greenpeace spokeswoman Mary Sweeters said in a statement. "Law enforcement put people’s lives in danger last night as water protectors attempted to clear a path for emergency services to reach the camp."

Declaring the police actions "nothing short of horrific," she asked Obama to "step in to stop the pipeline and end the violence immediately."

She noted, "This is about standing up for Indigenous people’s rights and sovereignty," adding, "This is about ensuring Standing Rock’s survival by protecting its water supply and land."

This past weekend local indigenous groups said in a statement that authorities had shot down three media drones and targeted journalists. Amnesty International USA has previously reported on police use of barriers to block journalists and human rights observers from reporting on the violent crackdown.

Hundreds of protesters have been arrested in past police crackdowns. Native American activists have claimed they were detained in dog kennels and treated like animals.

United Nations human rights experts have called on the U.S. government to halt construction of the pipeline in the area as this will affect indigenous communities and said U.S. authorities have used unjustified and excessive force against protesters.