Americans on both sides of the Trump divide must be asking, Is the president really gonna keep up the tweetstorm? 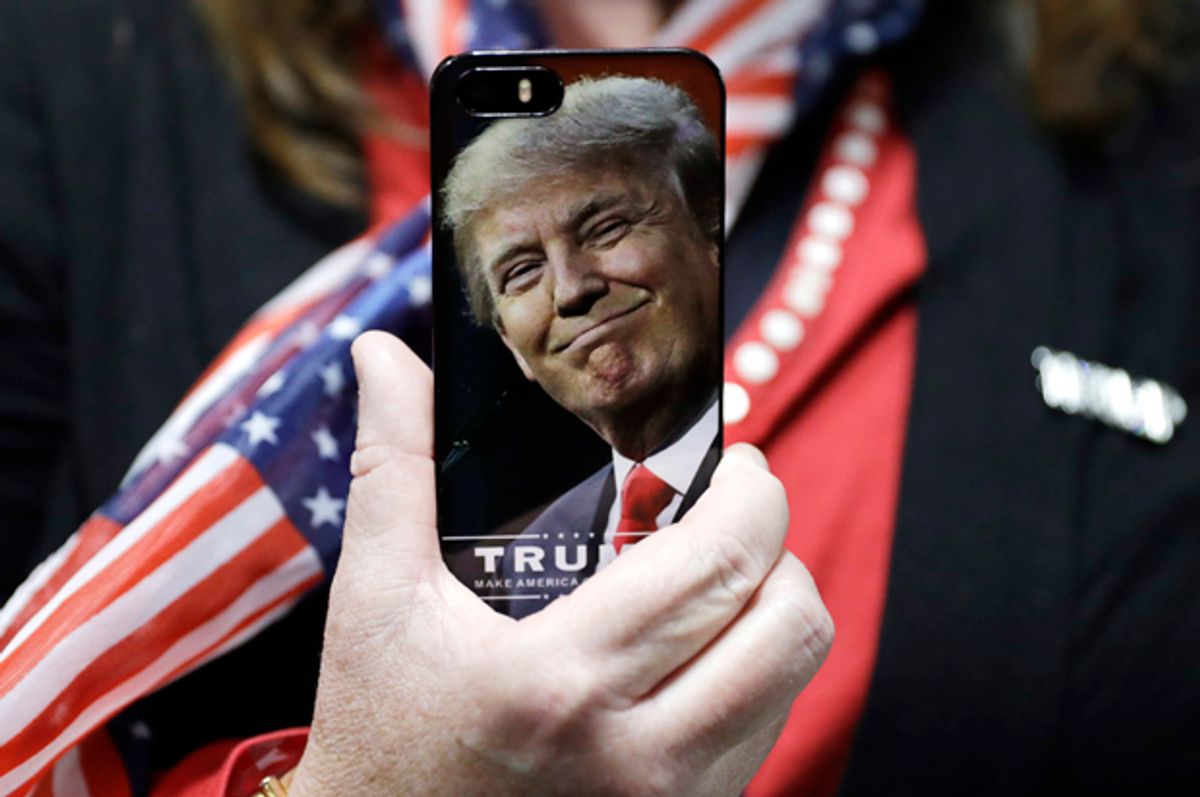 Remember when Donald Trump’s aides confiscated his Twitter account? It was a bright, beautiful time — if all too brief.

Trump went silent on his personal social-media profile as members of his team grappled with his surprise success on Election Day, a race that he was widely expected to lose. Normally a vehicle for off-the-cuff remarks that range from outrage about celebrity breakups (such as about Robert Pattinson and Kristen Stewart: “He can do much better!”) to jabs at his opponents, Trump's Twitter page was uncharacteristically calm. His team tweeted updates about the race, reminding supporters to get out to the polls. Following a victory tweet that evening addressing the “forgotten man and woman,” Trump barely updated at all in the wake of the election.

The president-elect instead used his digital moratorium to articulate a message of unity, one in opposition to the divisiveness and racial scapegoating that fueled his candidacy. His acceptance speech was applauded for a more conciliatory tone than in months past.

“To all Republicans and Democrats and independents across this nation, I say it is time for us to come together as one united people,” Trump pledged in a seemingly heartfelt speech. “It’s time. I pledge to every citizen of our land that I will be president for all Americans, and this is so important to me. "

He added, "For those who have chosen not to support me in the past, of which there were a few people, I’m reaching out to you for your guidance and your help so that we can work together and unify our great country.”

If he wants to be a uniter, Trump should start by dismantling the very engine that fueled much of the divisiveness over the course of his campaign: his own Twitter account. It’s time for him to start preparing to run the country and step away from the keyboard.

Trump’s critics — including Hillary Clinton, Nicholas Kristof, Dave Chappelle and even Charles Barkley — have urged Americans to “give him a chance” to lead. Maybe the character featured in his campaign isn't reflective of the personality who will govern, the argument goes. “Like it or not, we Americans have a new president-elect, and it’s time to buck up,” Kristof wrote in The New York Times. “I’ve seen past elections that were regarded as the end of the world — including, in many Democratic circles, the Reagan triumph of 1980 — and the republic survived.”

But as Maya Angelou famously said, “When people show you who they are, believe them the first time.”

Trump has used that chance to dismiss the thousands of voters upset about the results of the election, who have taken to the streets in opposition to his impending presidency. He has suggested that these were “professional protesters,” a sly hat tip to false reports that Hillary Clinton's campaign paid people to protest his rallies.

The president-elect has even revived his earlier criticism of Alec Baldwin’s portrayal of him on “Saturday Night Live,” a show that he once suggested should be canceled. The billionaire businessman also took numerous swipes at unfavorable coverage of him, referring to The New York Times (or #failednewyorktimes) as “dishonest” and a bunch of “fools.”

The crescendo of Trump's latest tear was criticizing the cast of Broadway’s “Hamilton” for being “rude” to Vice President-elect Mike Pence, who attended a Friday night showing of the acclaimed musical. “Our wonderful future V.P. Mike Pence was harassed last night at the theater by the cast of Hamilton, cameras blazing,” the president-elect wrote in a Saturday morning tweet. “This should not happen!” He later instructed the production's cast to “apologize!” for this behavior.

But the dialogue, in truth, had been civil. Following the performance, actor Brandon Victor Dixon, who plays Aaron Burr in the show, addressed Pence from the stage in a prepared speech as the Indiana governor was leaving his seat.

“Vice president-elect Pence, we welcome you and we truly thank you for joining us here at ‘Hamilton: An American Musical,’” Dixon said. “We really do. We, sir, we are the diverse America who are alarmed and anxious that your new administration will not protect us, our planet, our children, our parents, or defend us and uphold our inalienable rights. We truly hope that this show has inspired you to uphold our American values and to work on behalf of all of us. All of us.”

When it comes to Trump, taking the low road is par for the course.

Trump’s social media account has been an incubator for his worst tendencies, including his inclination to demean and harass women he doesn’t like. In 2012 he started a Twitter war with Bette Midler, referring to her as “extremely unattractive,” “grotesque” and “disgusting,” the latter being his favorite word to use against women. He has also called former talk show host Rosie O’Donnell “crude,” “rude,” “obnoxious” and “dumb.” When Fox News anchor Megyn Kelly, who moderated the first Republican primary debate, pointed out his remarks, he waged on a months-long assault on her, claiming that she had her period during the event.

This behavior has had a toxic trickle down effect through the race, as Trump’s trolling has enabled noxious behavior from his cadre of online followers.

Many of the politician’s critics have been stalked, harassed and threatened on the social-media platform. Rick Wilson, a Republican strategist critical of his policies, told MSNBC that his household gets at least 25 calls a week from angry Trump fans. His daughter received a letter in the mail from someone promising to rape her. Bethany Mandel, a conservative writer who contributes to Forward and The Federalist, added that she receives so many death threats from Trump supporters that she went out and bought a pistol for self-defense.

Then there’s Jared Sexton, a college professor who live-tweeted his experience at a Trump rally. Internet trolls claimed that he should be lynched and put in an oven, as he wrote in The New Republic. Trump supporters called his department and attempted to get him fired, but when the complaints weren’t successful, they urged callers to “make things up.”

Alt-right Twitter user Hank Reardon, who led the campaign against Sexton, proclaimed, “There are no rules with the left.”

Throughout the presidential race, Trump openly encouraged his followers to silence critics through any means necessary. When protesters showed up at rallies to demonstrate against his anti-immigrant, anti-Muslim platform, he told reporters — and by proxy, his supporters — that these people should be “roughed up.” Last year Trump publicly disclosed the number of one of his primary opponents, Lindsey Graham, telling people to call it. He even urged his devotees to look up one of the women accusing him of sexual assault on Facebook.

Since being elected to the White House, Trump has demanded respect, but aside from one speech, he has been unwilling to model what basic decency looks like. He has backslid, reigniting old feuds and starting new ones. In congratulating Chuck Schumer on becoming the new minority leader of the Senate, Trump claimed the New York senator is “smarter” than Harry Reid. He can’t even say something nice without tearing someone else down.

If Trump wants to created a united America, one small but effective way he can do so is to simply stop tweeting. It would impossible for him to “delete his account,” as Clinton famously urged during the 2016 race, because he will soon be the leader of the world. That steps requires having a public platform to discuss policy issues crucial to governance.

Trump should instead hand over the reins to a coordinated team of media strategists who can force him to stay on message — or in his case, articulate one. Politicians generally don’t run their social-media accounts, and as Trump’s example proves, there’s a reason for that.

This is not about giving him a chance. Trump already had his chance to prove that he could be the leader that a broken, divided America needs. He has failed.

The president-elect has done nothing to show that he deserves our trust, our loyalty or even suspension of our judgment. He has appointed a rogues gallery of right-wing henchmen to positions within the White House, while attacking journalists, politicians and entertainers. These multiple flame wars divert from the conversations we should be having about his presidency — including a $25 million settlement paid in connection with a set of lawsuits over Trump University. That news became swallowed by the “Hamilton” controversy, a brilliant bit of redirection on Trump’s part. He tweets to keep us distracted.

But if Trump really wants to talk about respect, he needs to start earning it.