Donald Trump has promised to deregulate poison and pollution — with a new Supreme Court justice, he probably will 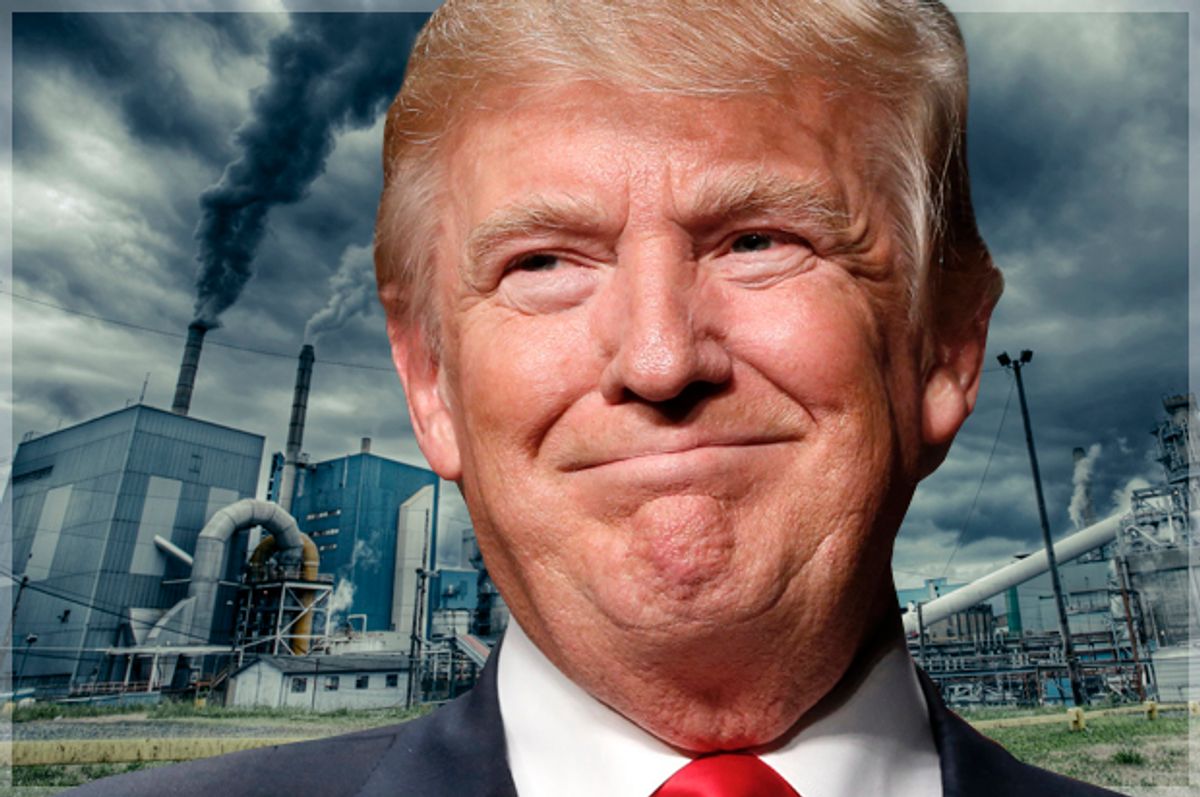 Donald Trump is going to be the president now, and that brings with it many horrors. At the top of the list is the fact that because the Senate's Republican majority flatly refused to accept President Barack Obama's right and duty to appoint Supreme Court justices, Trump will enjoy the unprecedented opportunity to appoint a high-court justice on the day he takes office, cementing the conservative majority that existed before former justice Antonin Scalia died in March.

Worse yet, over the next four years he may be able to replace at least one of the two elderly liberal judges — Ruth Bader Ginsburg or Stephen Breyer — giving conservatives six of the nine seats.

All week, I've been detailing what this means for activists on a variety of issues, from gay rights to labor organizing. But what Trump will be able to do to environmental regulation could be catastrophic on a worldwide scale and the damage would far outlive any of the people responsible — or even their grandchildren.

Part of the problem is that Republican control of Congress has made any legislative movement to protect the environment or manage climate change virtually impossible, so the Obama administration has focused its energies on using executive power over regulatory agencies to advance environmental standards.

Conservatives enjoy painting these actions as executive overreach, but the power of agencies like the Environmental Protection Agency to issue regulations was indeed granted through legislation like the Clean Water Act and the Clean Air Act. Industry forces are still fighting back in the courts, and that's where the trouble starts.

"Justices who keep an open mind and are guided by statutory text and empirical evidence will faithfully apply these laws regardless of the political affiliation of the President who appointed them," Sean Donahue, an environmental lawyer who has worked on several Supreme Court cases, explained in an email.

"What is so distressing about the Senate majority’s unprecedented refusal to perform its advice and consent role over the last eight months is its corrosive effect on the Court’s constitutional place as an independent institution, one insulated from short-term partisan political calculations," Donahue added.

In a phone interview, Pat Gallagher, director of the Sierra Club's environmental law program, said, “The greatest risk would be if Trump somehow gets an ideologue confirmed — someone who has extreme, Federalist Society views on the government and environmental law." He added, " That would be a disaster.”

Unfortunately, letting the Federalist Society handpick judicial appointments is exactly what Trump has promised to do.

“Even though I’m going to appoint great judges, you know, we could have as many as five judges," Trump told Breitbart News Daily in July. He went on refer to his rival Hillary Clinton, "And she’s going to appoint super-radical liberals and I’m appointing, you know, you saw the 11 names I gave, and we’re going to have great judges, conservative, all picked by the Federalist Society,”

It's true that Trump is incredibly inconsistent in his views, but there's good reason to think that he will, in fact, pick one of the 11 names on his short list to fill Scalia's seat.

There are a multitude of environmental cases to watch. But right now, the most telling fight is over the Clean Power Plan, a strategic effort to reduce carbon emissions from power plants that Obama and the Environmental Protection Agency rolled out in August 2015. The plan uses innovative strategies to reduce the reliance on coal and oil, and the coal industry in particular is not happy about it.

Unfortunately, for representatives of the polluting industries, however, the Supreme Court decided in 2007 in its Massachusetts v. the Environmental Protection Agency decision that greenhouse gases can be classified as pollutants. That gives the EPA authority, under the Clean Air Act, to regulate carbon dioxide and other gases that contribute to global warming.

“A majority of the Supreme Court justices today acknowledge climate change and agree that the Clean Air Act allows EPA to regulate greenhouse gases," Greg Dotson, the vice president of energy policy for the Center for American Progress, explained by phone. "A new justice, however, could tip the balance of the court in such a way that EPA’s actions become much less effective in actually helping to solve the problem.”

Because they can't challenge the EPA's authority over carbon dioxide emissions, lawyers from 27 states have joined together to sue the agency, claiming that the plan overreaches the EPA's geographical authority.

The Clean Power Plan "gave each state a goal and gave them all broad latitude on how to achieve it," Jennifer Dlouhy and Andrew Harris of Bloomberg News reported in September. "They aren’t limited to plugging smokestacks: A state could, for example, encourage homeowners to add insulation or get power companies to convert a coal plant to natural gas. It’s precisely that novel approach — regulating emissions by going beyond the power plants themselves — that the critics are challenging."

Gallagher takes a skeptical view of these arguments, saying that opponents of the Clean Power Plan are "in the climate denial camp" and want to take us back to before “the Supreme Court even recognized global warming as a problem.” The argument that the EPA's authority is limited to inside the fence line of power plants is just a back-door method to prevent the EPA from reducing greenhouse gas emissions. But it's a novel argument and one that gives conservative justices an opportunity to kill off one of the few hopes Americans have of reducing carbon dioxide emissions.

In February the Supreme Court voted 5-4, down partisan lines, to stay implementation of the Clean Power Plan pending judicial review. Scalia died shortly thereafter. Replacing him with Merrick Garland, as Obama wanted to do, was widely seen as a way to protect the Clean Power Plan from being shot down over these jurisdictional arguments. But with Trump filling the seat, almost certainly with an ideologue who doesn't even agree that climate change is real, the Clean Power Plan is in real danger.

If the Clean Power Plan goes, that will invite conservatives to come up with a variety of creative legal challenges aimed at further crippling the EPA's ability to do its job.

That is, if Trump doesn't just kill off the plan first by administrative means, which he has promised to do. As the The Washington Post reported earlier this week, that's easier said than done. Stopping a regulatory initiative after it's already been put in place, even if it's held up by litigation, requires a lengthy bureaucratic process and it's hardly clear that Trump and his team will be competent enough to pull it off. Letting the Supreme Court gnaw it down to nothing might be the easier way.

The other issue, one that Gallagher and Dotson flagged for me, is the question of access to the courts. With Trump taking office, it's a safe bet that the federal government is about to become dramatically less interested in enforcing environmental regulations that are on the books.

"It’s critical that citizens, under the citizenship provisions of federal law, be able to prosecute cases when the government’s unwilling to," Gallagher said. But conservative judges will be inclined to deny that environmental groups like the Sierra Club have the standing to sue, taking the position that such groups can't show they are injured by nonenforcement of environmental regulation. With an executive branch disinclined to enforce the rules, a judiciary that won't allow anyone to sue and a Congress dominated by corporate interests and climate deniers, the future for our environment is not bright.