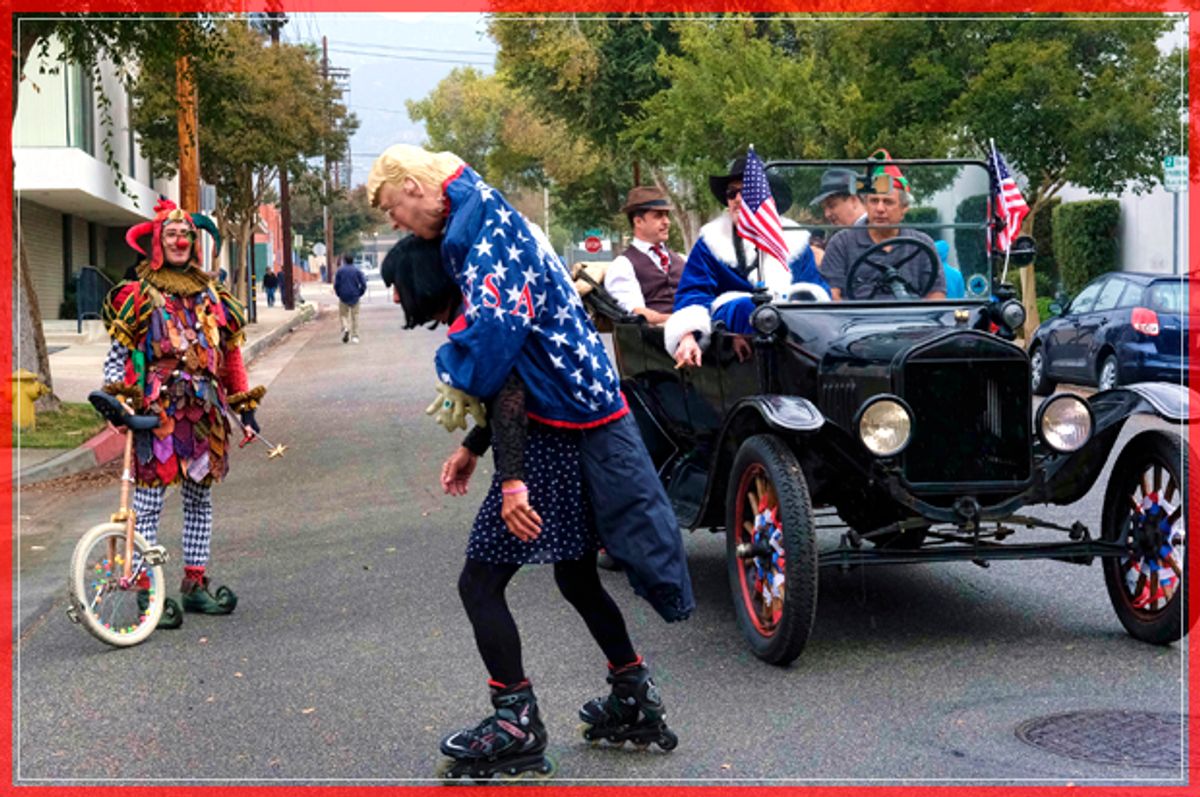 A roller skater carrying an effigy of President elect Donald Trump draped in an American flag rides down the street prior to participating in the 39th Occasional Pasadena Doo Dah Parade on Sunday, Nov. 20, 2016 in Pasadena, Calif. (AP Photo/Richard Vogel) (AP)
--

Pasadena, California   Richard Vogel/AP
A rollerskater carries and effigy of Donald Trump while participating in the annual Doo Dah Parade in Pasadena The human spirit needs whimsy more in dark times than light. Pasadena's annual Doo Dah Parade offers an irreverent counterpoint to the pomp and stateliness of the Rose Parade. It's one thing to hoist an effigy of an elected official up on a pole, but quite another to strap it to your neck like an oversized backpack and rollerblade him through the streets. With the President-elect tweeting every dark thought that rolls through his self-obsessed mind at all hours of the night, it sometimes feels like we're all skating uphill, every day, with an orange-skinned avatar of anger breathing down our collective neck. As late as three weeks ago, I was among the many political observers sniffing at Donald Trump’s insistence that the presidential election would be akin to the Brexit vote in the United Kingdom. But Trump proved to have the right of it as his own nationalist, anti-globalist, anti-immigrant movement pulled out a victory as surprising and unsettling as the British vote to leave the European Union. Now the world’s eyes turn to France, where Marine Le Pen, leader of the anti-immigrant National Front, is exulting in Trump’s win and aspiring to provide the next far-right shock to global politics in the country’s presidential elections this spring. Long-established politicians like Alain Juppe and Francois Fillon, two former prime ministers running for the center-right Republican nomination, would be considered strong favorites to win if they end up going against Le Pen. Perhaps they’ll have better luck putting the brakes on a reactionary political movement that has successfully defied the odds on both sides of the Atlantic. I went to my first NASCAR race in September at New Hampshire Motor Speedway and was surprised by how roped-off the infield was. I mean, I balled out on these tickets and I couldn't afford to go past pit row and into the garages. I'm sure it has a lot to do with how corporatized NASCAR is, even by pro sports standards. As if the exultant "Heil victory" chants from jubilant crowds quoting Nazi propaganda this weekend weren't enough to make you consider who's way too pleased with the outcome of the election, how about this? On the 41st anniversary of Spanish dictator Francisco Franco's death, fans in Madrid held signs promising to "Make Spain Great Again."