“Casablanca” by way of “Mr. and Mrs. Smith”: “Allied” is half of a great movie

In "Allied," filmmaker Robert Zamekiis works very hard to get out from behind a shadow he chose to stand in 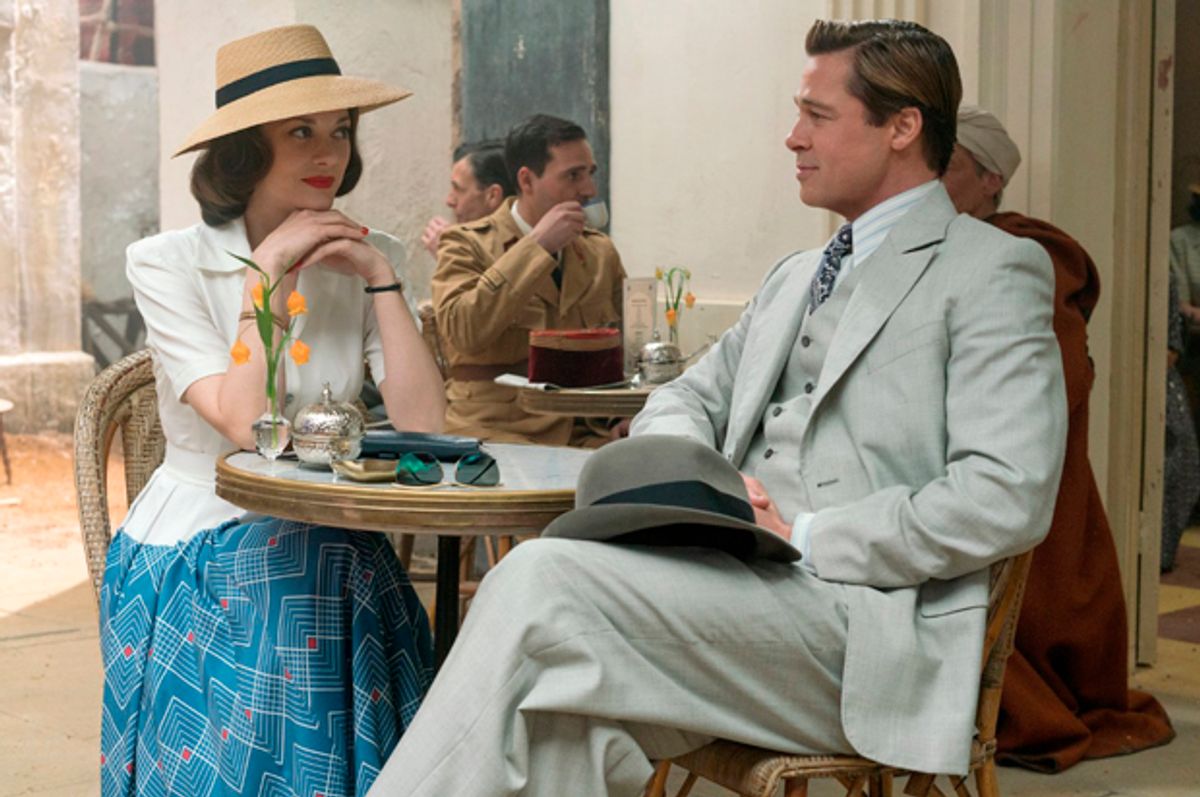 “Allied” is “Casablanca” by way of “Mr. and Mrs. Smith.” The film, directed by Robert Zemeckis (“Forrest Gump”), concerns two spies, Max Vatan (Brad Pitt) and Marianne Beauséjour (Marion Cotillard), who fall in love during wartime. Max is an intelligence officer who dreams of Medicine Hat, Alberta, where he wants to raise a family in the rolling hills of picturesque solitude. Marianne is a French resistance fighter who knows what makes a great spy. “I keep the emotions real,” she tells Max. Together they kill Hitler’s ambassador, which as first date stories go, is much preferable to “We met on Christian Mingle.”

Zemeckis’ film strikes out in the direction of Michael Curtiz’s masterwork “Casablanca” and falls ponderously short of the mark, in both vision and execution. It’s a wonder that so many filmmakers dare go near “Casablanca.” One recent attempt was “The Good German,” possibly Steven Soderbergh’s least memorable effort. “Allied,” which is half of a good movie, is at its best when it leaves cinematic history behind. As homage, “Allied” is passable, if uneven, entertainment. But it comes to life in the second half, when the movie thrillingly sets off on its own path.

Your ability to enjoy “Allied” will likely be dependent upon whether you can overlook some key deficits. Pitt, normally an actor of great warmth and charisma, appears to have modeled his performance after a wax statue, and his love scenes with Cotillard lack a palpable romantic spark. Anyone concerned that Pitt left his real-life spouse, Angelina Jolie, for Cotillard (as was rumored) need only sit through their on-screen romance for a moment to know that was not the case.

This lack of chemistry makes the theoretical challenge of setting a love story in Vichy occupied Morocco during World War II in the bustling port city of Casablanca even more of a practical challenge than it needs to be. Never mind, this film is about blossoming emotion, not smoldering coals. In "Allied" love blossoms behind enemy lines, despite Max’s fervent reservations. He believes that getting involved with a fellow agent in the field is a mistake. Marianne looks at him with such intensity that the viewer knows at once that his resistance will give way, if only because they’re the two most attractive people in the movie. That’s how it works. Their carnal longings are consummated in the back of an automobile during a sandstorm, the sands of the Sahara enveloping the cab.

Zemeckis, who commonly works with CGI, relies heavily on digital effects to achieve the look of the golden age of Hollywood, but his Casablanca has the look of a gorgeously rendered screen saver. Everything, including the actors’ faces, is so heavily filtered that they could be mistaken for characters in “The Polar Express.” There’s a shot of footprints in a desert dune that is so painstakingly precise that you can practically see the beleaguered intern tasked with digitally inserting it.

That might seem like a strange way to introduce a movie I quite liked, but that’s because watching “Allied” is to view two different films. After the German ambassador is dispensed with, the film leaves Morocco and finally comes into its own. Max and Marianne marry, settle down in London and start a family, but their life of domestic bliss hits a snag: A mysterious special operations enforcement officer (Simon McBurney) informs Max that his wife may not be who she seems. Reports suggest the real Marianne Beauséjour was killed during a mission. This Marianne, he claims, is an impostor, merely a look-alike who took a dead woman’s place to spy for the Third Reich.

If learning that your wife is a Kraut isn’t bad enough, it gets worse. Should Marianne be discovered to be working for the other side, guidelines state that Max will have to kill her. It’s called the “intimate betrayal rule,” a policy the film’s press kit claims was actually in place during World War II. Beats me, they didn’t cover that one in Ms. Carboy’s 11th grade history class. The conceit may be somewhat dubious as history, but it’s one hell of a twist.

Zemeckis is given a great deal of credit for his technical wizardry (the plane crash in “Flight,” traversing the Twin Towers in “The Walk”). But what makes him such a skilled maestro is his keen sense of timing, especially when it comes to the film’s action sequences. In the early scenes, Max spies a German officer whom he fears may remember him from a previous job. He follows the man into a phone booth and strangles him, making it appear as if he choked. Later Max visits a French jail seeking the counsel of a one-armed man who knew Marianne, hoping to verify that his wife is who she says she is. He runs afoul of the Third Reich in the process, hiding under the floorboards in a scene that evokes the tightly coiled tension of “Inglourious Basterds.”

If Pitt appears bored with facing off against Nazis by now, it’s Cotillard who shines brightest in “Allied.” She gives a star performance reminiscent of the great Ingrid Bergman, although oddly not in “Casablanca.” In Alfred Hitchcock’s “Notorious,” Bergman plays the daughter of a Nazi spy who is tasked with getting information from the other side; she, too, lets love — this time with Cary Grant — get in the way of her mission. Like Bergman, Cotillard commands the camera every minute she’s on screen with a radiance that’s otherworldly. She’s so wonderful in “Allied,” even despite her co-star, that she deserves not an Oscar but a Purple Heart.

Screenwriter Steven Knight (“Eastern Promises”) is much better at tearing apart his lovers than bringing them together and saves his best scenes for last, leading to a powerhouse final sequence that finally earns the comparison to “Casablanca.” I dare not breathe a word of it, except to say that it left me nearly speechless. Upon leaving the theater, you may be so enraptured by its heart-pounding climax that you'll forget the difficulty in getting there.

“Allied” is certainly not a great film — in fact, it’s a bit of a mess — but you will be forgiven for thinking so for a brief moment.