Donald Trump's swimming in the swamp: Don't expect Republicans to investigate his conflicts of interest

The press? Weak. Democrats? Ineffective. There's one group — the GOP — that can check Trump but likely won't 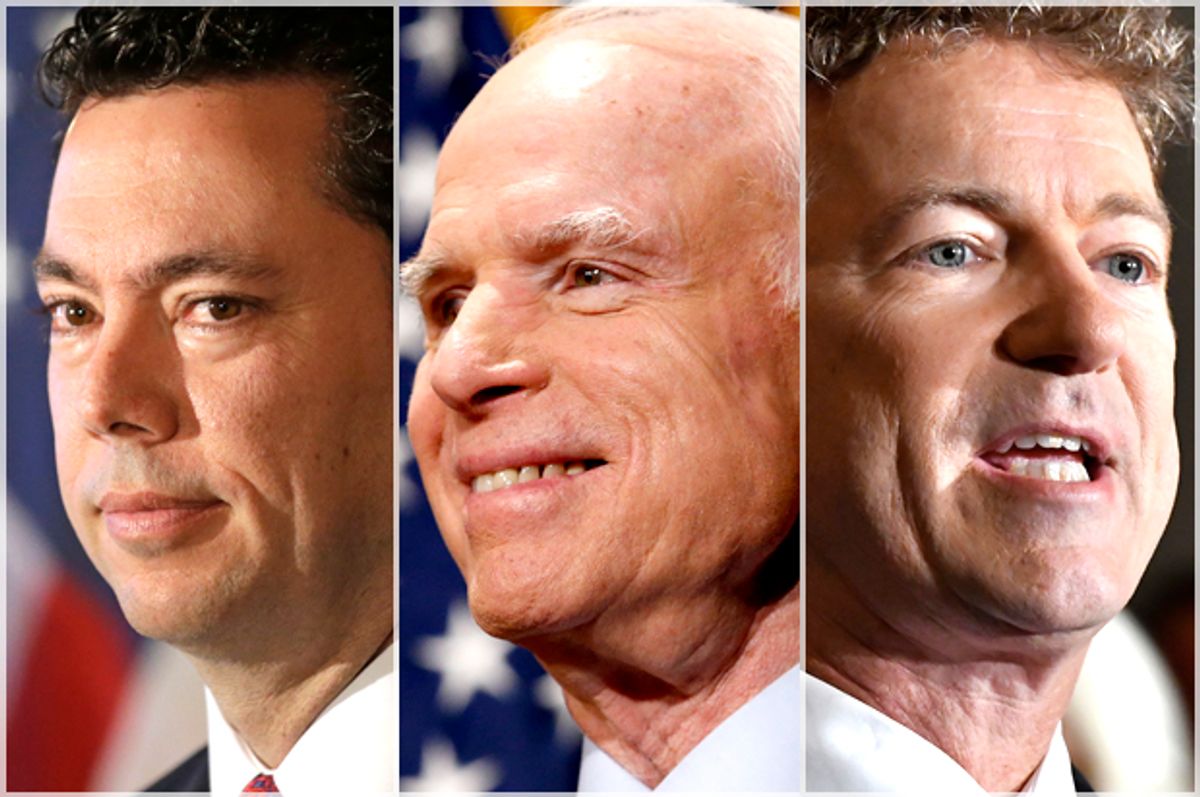 Kellyanne Conway says she's confident Trump isn't doing anything illegal with his businesses because he has lawyers and advisers. pic.twitter.com/Y9uDLiCJ2y

That tweet from Donald Trump adviser Kellyanne Conway came in response to questions from members of the press about all of Trump's potential ethical violations since the election. I wrote about a few of them on Monday, but since then it has been reported that Trump had asked about some permitting issues for a Trump project during a call with the president of Argentina (an issue Kurt Eichenwald raised in his September investigation of Trump's conflicts of interest). The Argentine president's office said the request didn't happen, but the journalists who reported it are credible and it has since been revealed that Ivanka Trump was on the call, so it was a breach of normal protocol regardless.

Last night The New York Times reported that when Trump met with British politician Nigel Farage he asked for help in opposing wind farms that ruin the view from Trump's Scottish golf courses. Andy Wigmore, a Brexit media consultant who was present, said he and insurance man Arron Banks, who backed the Brexit campaign, are happy to oblige:

Mr. Wigmore headed communications for Leave.EU, one of the two groups that led the Brexit effort. He said in an email that he and Mr. Banks would be “campaigning against wind farms in England, Scotland and Wales.”

Trump will surely not forget the favor.

These are some of the recent potential ethical breaches we know about. They are unlikely to be the only ones. Members of the Trump transition team have already made it clear that they do not believe the norms that have always applied to previous presidents should apply to him.

The president-elect tweeted this out Monday night:

Prior to the election it was well known that I have interests in properties all over the world.Only the crooked media makes this a big deal!

These issues were obvious during the campaign when Trump refused to release his taxes or otherwise reveal the extent of his holdings. There were dozens of issues — such as his fraudulent charity, the myriad lawsuits, claims of sexual assault, benefits his campaign received from actions against his opponents by hackers and law enforcement — that would almost certainly have destroyed any other candidate.

But members of the press pretty much ignored this issue throughout the campaign. They are paying attention now, but there is a sense that it's all just whirling around in the general maelstrom that is the Trump phenomenon. After all, this is a man who has already done everything a politician can do to self-destruct and he just keeps getting stronger. His poll numbers are going up. His supporters are feeling emboldened. Even if the media were to do its job and hold Trump's feet to the fire, it's hard to see how this would change him or lower support for him.

So is Trump stoppable? It's hard to imagine what it will take. Considering that he has no conscience and the Democrats and press are impotent, the only people with the power to rein him in are congressional Republicans.

Conservative analyst David Frum said on "Face the Nation" over this past weekend that Republicans must "prevent this administration from being devoured and consumed by scandal," that it must be "Trump-proofed." He is in favor of Republicans starting small by voting for a bill to be introduced by Sen. Ron Wyden, D-Ore., requiring that all presidents and presidential candidates, including the current president-elect, release three years' worth of tax returns. If they refuse, the IRS will release them. His theory is that the returns will show where all the potential conflicts of interest are and will give Congress a baseline for oversight.

That would, of course, require Congress to perform that oversight and there is almost no evidence that it will. The chair of the House Government and Oversight Committee, Rep. Jason Chaffetz of Utah, has indicated that he is prepared to continue the investigations of Hillary Clinton's email server. But so far, despite a flood of calls from constituents to all members of Congress, he has remained noncommittal on Trump's obvious violations of ethical norms.

Senate Majority Leader Mitch McConnell declined to comment when asked about the matter by Politico, as did half a dozen other Republicans. If the Senate were to undertake oversight of Trump's conflicts it would likely fall to the Committee on Homeland Security and Governmental Affairs, which is led by Sen. Ron Johnson of Wisconsin, one of the few GOP senators who ran as an unabashed, forthright Trump backer — and won handily.

It's possible that Johnson will be forced into action by one or two of the Republicans on his committee, among them Sen. John McCain, who has expressed extreme disdain for Trump's promises to bring back torture, and Sen. Rand Paul, who has come out against some of Trump's hawkish Cabinet picks. But taking on Trump's conflicts of interest seems like a stretch.

There are plenty of GOP ethics lawyers who say that Trump is violating norms and the Constitution, even to the extent that he's committing impeachable offenses even before he takes office. The Washington Post's Greg Sargent ran down some of the political options that might be taken by Republican officials as well. But again, doing anything about such flagrant potential violations of ethical practices requires action by a Congress firmly controlled by the Republican Party. And remember, even before Trump came along the GOP was in the grip of a nervous breakdown, with a strong grassroots constituency breathing down the necks of elected officials in Washington the minute they did anything that smacked of apostasy.

Today, that constituency is all in for Donald Trump. As Jenny Beth Martin of the Tea Party Patriots put it in a piece for Politico:

Our values prevailed in the 2016 general election. We have much to do to see those values become reality in America again. And we couldn't be happier.

If we're counting on Republicans to save us from Trump, we're going to be waiting a good long time.

Trump has never hidden who he was. He bragged about buying off politicians and not paying his taxes. He is known to be a con artist, a cheat and a blatant liar. He never promised to divest himself of the business.

Trump often recited the lyrics to a song by Al Wilson called "The Snake" at his rallies and the last line goes like this: "You knew damn well I was a snake before you took me in." He was talking about himself.