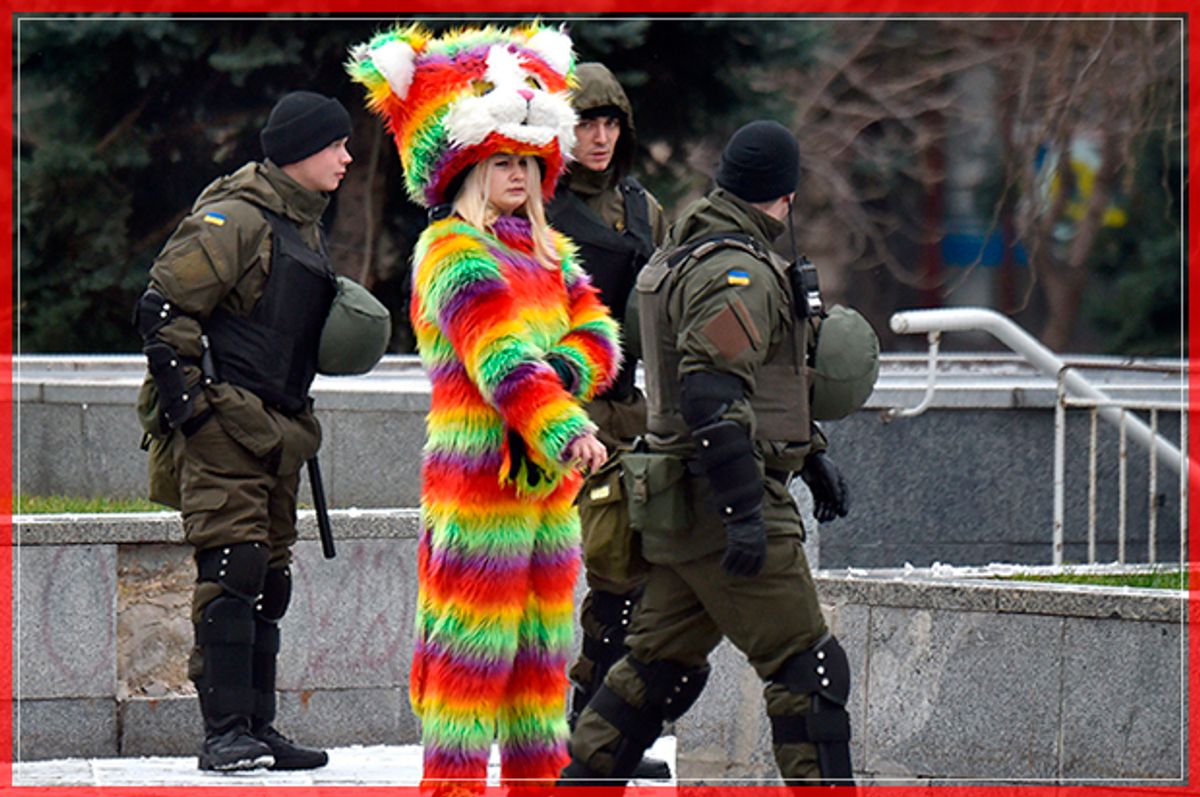 Ukrainian National Guard members walk past a woman wearing a colourful costume as they patrol near Independence Square in Kiev on November 22, 2016 following a night of violence by activists of some far-right Ukrainian parties. Kiev police said they were investigating an attack by far-right activists on a Russian bank and the office of a Ukrainian politician who is close friends with Kremlin chief Vladimir Putin. Ukraine had marked the third anniversary of the start of three months of protests that resulted in the country's Russian-backed former president being ousted in February 2014 as the former Soviet republic set on a pro-European Union course. / AFP / Sergei SUPINSKY (Photo credit should read SERGEI SUPINSKY/AFP/Getty Images) (Afp/getty Images)
-- Winter is coming, and it seemed like almost over night, we transitioned from sweater weather to puffer jacket season in 2016.

This image of a post office worker in Grafton, New York was taken on Monday. The snow is up to her knees and piles of white ares stacked high on the picket fence. It reminds me of joyous elementary school snow days. As adults, we wake up to snow and think about the grey, gross, icy conditions as we commute to work, but as children we would have screamed with happiness as visions of snowmen danced in our heads. In Bucharest local police protest a minimum retirement age of 65, demanding it be lowered to something much more reasonable. Here 2 of about 100 officers smirk behind fake beards worn to spur reflection about what an older police force might look like responding to an emergency. These pelicans are happily perched on a streetlamp in Colombo, completely unaware of how lucky they are. They're lucky because they fly around happily in 2016 and not 12 years earlier in 2004, when a tsunami destroyed the coast. I recently read "Wave," a memoir from Sonali Deraniyagala, who lost both her parents, her husband and her two young children in the tsunami that summer. Imagine being the only person to survive in your family. I couldn't go on living, but she did. Security is tight by Kiev's Independence Square on the third anniversary of the protests in Ukraine that led to the rise of a pro-European Union government. Even though Monday night's violence included reported attacks by ultra-rightist forces, one patriot can't be kept from showing her colors.