Donald Trump, in an effort to cut spending, is likely going to slash some important climate change programs 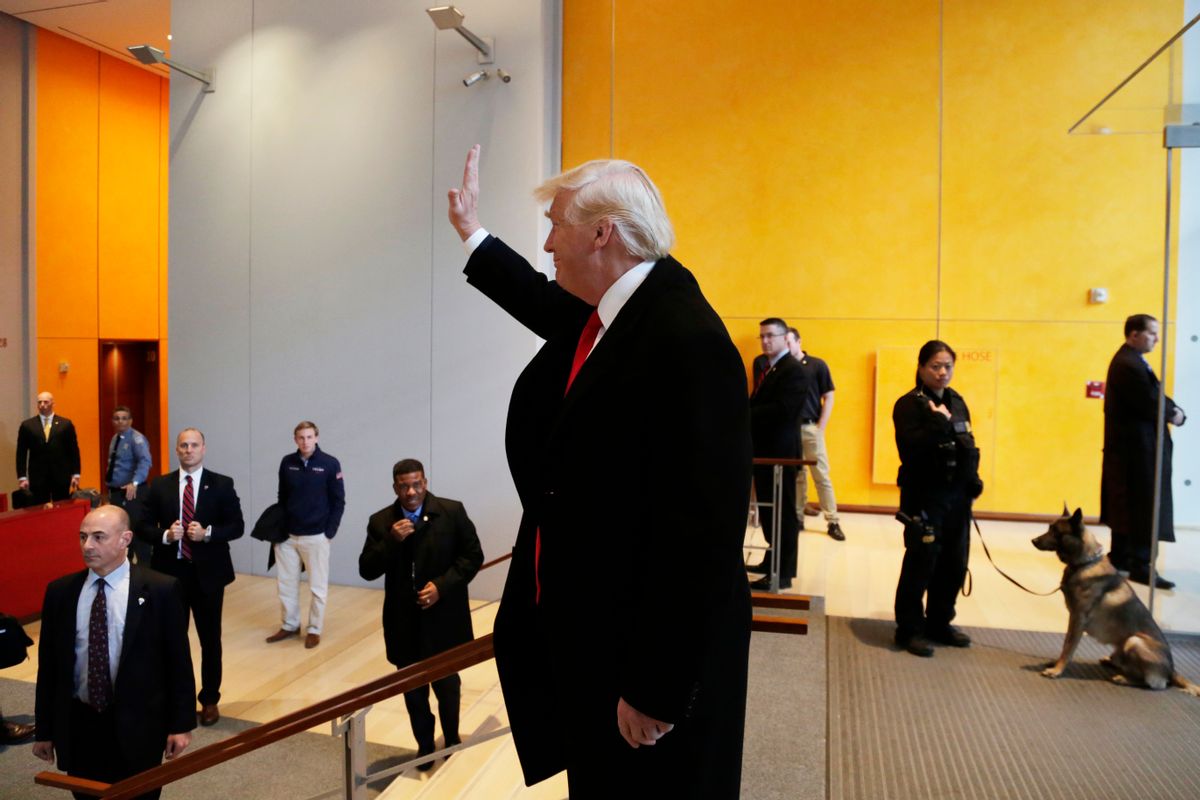 President-elect Donald Trump waves to a crowd in the lobby of the New York Times building following a meeting, Tuesday, Nov. 22, 2016, in New York. (AP)
--

The world is waiting to hear what President-elect Donald Trump has in mind for governing the U.S. Among the biggest questions is what will happen to the budget for climate and energy-related activities.

Though they’re a relatively small piece of a federal budget that is in excess of $1 trillion, how the administration deals with climate and energy will go a long ways toward determining the future of the planet.

“We don't get a second chance,” Secretary of State John Kerry said last week at the United Nations climate talks in Morocco. “We have to get this right and we have to get it right now.”

The climate and clean energy budget could be in peril, though. Trump has called climate change a hoax created by the Chinese and has vowed to end the Paris Agreement (though on Tuesday, he softened that on both those stances in a meeting with New York Times reporters). In a video statement released on Monday, he said he would “cancel job-killing restrictions on the production of American energy, including shale energy and clean coal, creating many millions of high-paying jobs.” That could be a reference to his stated goal to rescind the Clean Power Plan and Environmental Protection Agency rules.

The EPA transition team leader is Myron Ebell, a climate denier from the Competitive Enterprise Institute. On Monday, the transition team announced that Thomas Pyle, a former Koch brothers lobbyist, would head up the Energy Department transition and Doug Domenech, who runs Fueling Freedom, a group that aims to “explain the forgotten moral case for fossil fuels,” would head the Interior Department efforts.

Add in a Republican-controlled Senate and House, which have repeatedly tried to block climate action under President Obama, and it’s likely that the federal climate budget will suffer in the coming years. Just how remains to be seen until Trump proposes his first budget.

Here’s where a number of federal agencies stand with climate and energy funding, what they spend it on, and what could be under fire after Jan. 20 when Trump takes office. The budget numbers below are based on the 2017 fiscal year budget requests for each agency or department.

What it’s spent on: Energy efficiency and renewable and nuclear energy research and development as well as science and computing.

What could happen to it: Trump has said little about what his Energy Department would look like or how its funding would be affected. However, his energy plan calls for aggressively promoting fossil fuels to achieve full energy independence and create new jobs. His plan says he would continue research on nuclear power and renewables, but do so without preferring one energy source over another. By contrast, the Obama administration, through its Climate Action Plan, has made developing renewables a priority while restricting new coal development on federal lands because coal is a major source of the greenhouse gases driving climate change.

If the Department of Energy deemphasizes research and development on renewables, the National Renewable Energy Laboratory (NREL) could take a major hit. The NREL is a national lab that researches renewable power and energy efficiency technology, and ways to make the electric power grid more sustainable. The DOE, which determines funding for the 17 national laboratories scattered about the country, funds 80 percent of NREL’s budget, while the other 20 percent comes from other federal agencies and the lab’s partnerships with industry.

“We can’t speculate on what sort of policies President-elect Trump may choose to prioritize or what the related impacts will be for NREL,” lab spokeswoman Heather Lammers said. “In the meantime, we remain focused on our mission to find answers to today’s energy challenges.”

What it’s spent on: Supporting scientific research and managing landscapes for climate resilience as well as expanding public access to climate-related information. The Interior Department, through the U.S. Geological Survey, funds climate science centers, and research on carbon sequestration.

Interior’s climate resiliency programs include nearly $200 million to help communities such as those damaged by Hurricane Sandy to shore themselves against extreme weather, sea level rise and other impacts of climate change.

What could happen to it: Trump has been relatively silent on his intentions for the Interior Department other than saying that he wants to open federal public lands — many of them managed by Interior — to fossil fuels development to the maximum extent possible while also denying the existence of climate change.

What it’s spent on: Almost anything the U.S. does about climate change on the international stage comes via the State Department. That includes committing money to the Green Climate Fund, a global fund to help developing countries adapt to and mitigate climate change, and the U.N. climate negotiation and research process itself.

What could happen to it: Trump has said he would pull out of the Paris Agreement. That would likely also come with climate funding cuts to the United Nations programs that are part of the international process.

What happens to climate-related aid administered through USAID is less clear. Trump hasn’t announced any specific plans on aid, though in a 2012 tweet he intimated that the World Bank linking poverty and climate change was a bad idea. In his presidential bid announcement he said the U.S. should “stop sending foreign aid to countries that hate us.” More broadly, Trump has espoused an “America First” policy, which could put international development in the crosshairs.

Without any specific policy preferences, it will be up to State Department officials to make the case for why their funding is so important. Ed Carr, a geographer who works on international development at Clark University but has extensive contacts at USAID, said it will likely require framing that speaks to Trump, which might be slightly different than past presidents.

“He sees himself as a business person with good deals and bad deals,” Carr said. “Almost everybody knows dealing with something proactively costs you much less than reacting much later. Being able to demonstrate that with aid could speak to the businessman and help convince him.”

What it’s spent on: NASA funds a variety of climate research on earth and in space. Closer to home, it manages one of the gold standard global temperature records. Its researchers also model the climate and monitor the ice sheets at both ends of the poles for possible signs of melt, which could inundate coastal cities.

An animation showing how carbon dioxide moves around the planet.
Credit: NASA/YouTube

Beyond the exosphere, NASA satellites monitor carbon dioxide, precipitation, storms, sea levels, land cover change and even gravity shifts at the poles due to melting in ice. These satellites provide a baseline that can measure future climate change against it and also provide crucial information for storm monitoring and weather forecasting.

What could happen to it: At an October rally in Florida, Trump said he would refocus NASA’s mission on space exploration. Bob Walker, a former Republican Congressman who has advised Trump on space policy, told the Telegraph in a recent interview that NASA has been reduced to "a logistics agency concentrating on space station resupply and politically correct environmental monitoring.”

What it’s spent on: Climate and air quality research and development as well as enforcing climate rules and regulations such as the Clean Power Plan, which would cut greenhouse gas emissions from coal-fired power plants. Cutting the EPA’s budget to prevent it from regulating emissions that cause climate change could be a setback to the Paris Climate Agreement, which was signed with the understanding that the U.S. would be among the world’s leaders in emissions cuts. Without the EPA’s emissions regulations, the world potentially will be unable to meet the ultimate climate goal — to prevent global warming from exceeding 2°C (3.6°F).

What could happen to it: With the EPA transition team headed up Ebell, a climate change denier, and Trump’s stated intention to cut climate-related regulations administered by the EPA, the agency is expected to see deep funding cuts, though nobody knows for sure how deep they’ll be.

David Goldston, government affairs director for the Natural Resources Defense Council, said it’s unclear how quickly EPA funding might be cut and how soon rollbacks of regulations might occur, but it’s clear that funding for the agency will be a battleground.

“I think they’re going to pull back on everything they can,” said former New Jersey Republican Gov. Christine Todd Whitman, the first EPA administrator under George W. Bush. “They do not believe in climate change and they do not like regulation.”

What it’s spent on: NOAA’s climate science budget funds both in-house researchers and a number of programs at universities. They monitor global issues like greenhouse gases, sea level rise, Arctic sea ice and El Niño as well as another gold standard global temperature dataset. But they also provide regional climate services that take that data and make it local through the Drought Monitor or regional climate offices, which help farmers, city planners and local governments. They also help maintain research bases at the South Pole and Greenland.

What could happen to it: NOAA might be a rare climate bright spot under Trump.

Walker has hinted that what NASA loses in earth science research could be shifted over to NOAA. It’s unclear, however, if the added responsibilities will come with a bigger budget with Walker only saying that “there would have to be some budget adjustments.”

It seems unlikely that those adjustments would just give NASA’s climate chunk to NOAA given that it’s an order of magnitude larger than NOAA’s current climate budget. So while it bodes well that NOAA may not lose its budget for climate research, it would be hard-pressed to fill NASA’s shoes without adequate funding.