Republicans did everything to stop President Obama, but now want America to back a president who lost the popular vote

Where was all that acceptance of the will of the people when Obama was elected? 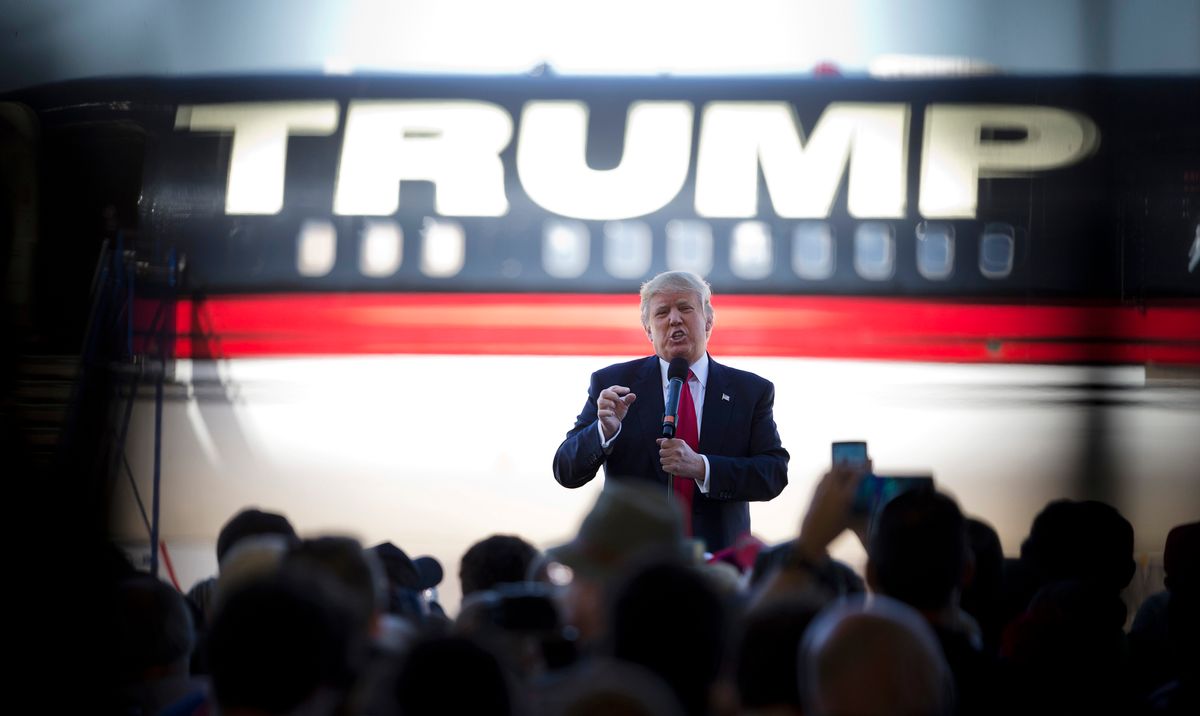 FILE - In this Saturday, Feb. 27, 2016 file photo, Republican presidential candidate Donald Trump stands in front of his airplane as he speaks during a rally in Bentonville, Ark. (AP Photo/John Bazemore) (AP)
--

A former reality TV star who bragged about sexually assaulting women, cheated hundreds of contractors and workers out of pay, insulted the family of a slain Muslim soldier, mocked a disabled reporter, sent out mean-girl tweets to a former beauty queen at 3am like a psychotic ex-boyfriend, avoided paying millions in tax obligations, and made a whole political career out of resurrecting the racist birther movement with continuous assaults on President Obama, has been elected president.

Donald J. Trump will soon have access to the nuclear launch codes and the power to do the following terrifying things: nominate alt-right judges to turn America back at least 50 years, fill his cabinet with people as manifestly unqualified as he is to ravage the planet, crash the economy, infringe on civil liberties, destroy reproductive rights, repeal Obamacare, and scrap longtime alliances like NATO, allowing Russia's dictatorial Putin to do as he pleases in the Middle East and Ukraine.

If all of this sounds like grounds to nurse a bottle of Jack with some Xanax in a dark corner, that's because it most certainly is.

But the very same Republican Party that spent eight solid years making President Obama's life a living hell, obstructing and blocking everything he proposed under the sun all while hurling vile and racist attacks on the man, well, suddenly wants the country to come together and sing kumbaya and accept the electoral outcome. To that end, Republicans have done everything to delegitimize the outbreak of passionate protests taking place across the country in the wake of Trump’s unexpected victory. While there have been a few reports of anti-Trump protesters engaging in violence, the demonstrations have remained largely peaceful.

And a bit of bad behavior might be expected with any major protest, especially after one of the most insane and contentious presidential election in modern history, which featured Trump's frequent incitement of his supporters to violence. Even before he was telling supporters that the election would be "rigged" and they might want to arm themselves, Trump had shown a willingness to tolerate violent resistance when things did not go the way he wanted. Well before anyone had the inkling that he might run for, let alone win the presidency, Trump tweeted an invitation for resistance by any means necessary following President Obama's reelection win in 2012: “We can't let this happen,” he implored his army of Twitter followers. “We should march on Washington and stop this travesty. Our nation is totally divided.”

He did not need to march on Washington, the recalcitrant Republican Congress did it for him, vowing to obstruct every single action the president attempted to take, refusing to hold hearings on his budget, and hitting peak obstruction when they refused to meet with his Supreme Court nominee. The American people be damned. They were not going to do their jobs.

Outgoing Republican National Committee Chairman Reince Priebus, now Trump's chief of staff, is one of the newly converted, peace- and democracy-loving Republicans admonishing anti-Trump protesters, while simultaneously claiming to love party unity. The hypocrisy here is so strong it needs to come with a warning label.

“I’m sure that the vast majority of people are just very disappointed with the outcome of the election, so I’ll give them that, and I’ll also say I understand the First Amendment of the Bill of Rights," Priebus said. "But this election is over now. And we have a president-elect who has done everything he can do over the last 48 hours to say, ‘Let’s bring people together.’”

Priebus thinks 48 hours is plenty of time. Never mind that Republican obstruction and disrespect for President Obama endured eight long years. Not to mention the fact that this plea comes from the committed public servant who put his country in jeopardy when he assembled a task force to ensure that President Obama's constitutionally mandated duty to nominate a justice for the Supreme Court would be blocked at all costs. But now that Priebus has landed the position of White House chief of staff, he's just in love with bipartisanship and finding common ground.

But it's not just high-ranking Republican officials who are guilty of this Olympic-level hypocrisy, some of the loudest voices in right-wing media are whining about how unfair it all is as well. After spending the Bush years serving as the state-sponsored media and hating on Americans upset with unwarranted surveillance, a dishonest war and the destruction of the environment, Fox News suddenly became a bastion of resistance and opposition at all costs when President Obama got into office. Now that their guy is in, it's time again to toe the administration line. Cherry-picking protest movements is a regular Fox ploy. The network blatantly promoted Tea Party protests and more recently armed takeovers of federal lands, while showing utter contempt for anti-Trump protests, which Fox has said features "losers without jobs" and "paid insurgents by the DNC."

Indeed, those million-moron marches of pre-deplorables spewing treasonous (and racist) hatred at President Obama not only received an infinite amount of positive coverage from Fox News, but reporters for Fox out and out supported them. Fox News' embedded reporter Griff Jenkins lavishly praised Tea Party Express rallies in 2009, though he claimed he was "simply reporting" on them. Reporting, cheerleading, what’s the difference? The network vigorously promoted the 2010 Tea Party Express Tour, which featured a number of white supremacists who openly called for armed insurrection. You know, people just accepting an electoral outcome.

In short, after spending an entire year fanning the flames of hate and misogyny and inspiring his supporters to threaten armed insurrection if he lost, Trump, Republican leaders and members of the right-wing media suddenly think liberals should just get in line and fall in love with their new president. Where's Michele Bachmann to mispronounce chutzpah when you really need it?