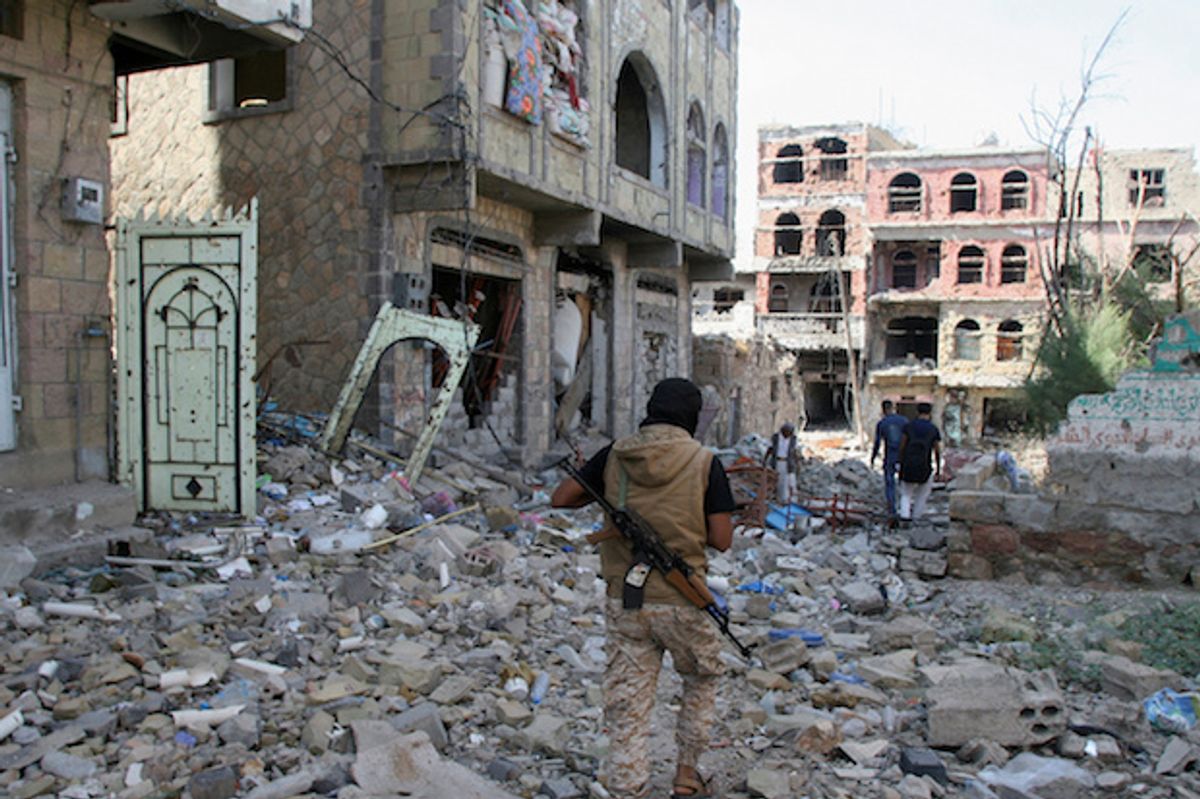 Rebels allied with a U.S.-backed, Saudi-led coalition have been "terrorizing" hospitals and doctors in Yemen, according to a new report by Amnesty International.

Militants opposed to Yemen's Houthi movement, which seized control from the Saudi-backed government in late 2014, "are leading a campaign of harassment and intimidation against hospital staff and are endangering civilians by stationing fighters and military positions near medical facilities," the human rights organization said.

These anti-Houthi forces, also known as popular resistance committees, are allied with exiled former leader Abd Rabbu Mansour Hadi, who fled to Saudi Arabia when the Houthis took power, and with the U.S.-backed, Saudi-led coalition that has been waging a destructive bombing campaign in impoverished Yemen since March 2015.

Amnesty International researchers interviewed 15 doctors, along with other hospital staff, in the major southern city of Taiz, which is controlled by the Houthi movement. The rights group said U.S.-allied anti-Houthi forces "regularly harassed, detained or even threatened to kill them over the past six months."

Yemeni doctors said they have sometimes been forced to carry out their work at gunpoint. In other cases, when the hospital has been at capacity and rebels had to be turned away, the anti-Houthi militants would threaten them.

The rebels have sometimes started physical fights with medical staff, the report added. On at least one occasion, they killed someone in the hospital. A doctor told Amnesty International that, when an anti-Houthi fighter with a minor leg injury was turned away because he did not require emergency care and could be treated by a nurse, the rebel's father started firing his gun, killing a patient and injuring hospital staff.

“Hundreds of times [anti-Houthi fighters] threatened us and interfered with the hospital’s administration and our decision-making," an administrative worker recalled. "When we stand up to them, they threaten us with being killed."

Philip Luther, research and advocacy director for the Middle East and North Africa at Amnesty International, said there "is compelling evidence to suggest that anti-Huthi forces have waged a campaign of fear and intimidation against medical professionals in Ta’iz."

The hospitals in Taiz treat people who have been wounded on all sides of the war. Luther pointed out, “It is a fundamental rule of international humanitarian law that the wounded – whether civilians or fighters – must be collected and cared for."

"It is outrageous and unacceptable that anti-Huthi forces are retaliating against medical staff for performing their duties," he added.

U.S.-backed, Saudi-led airstrikes have taken an even larger toll on hospitals inside Yemen. A report earlier this month by the World Health Organization found that a majority (55 percent) of health facilities are closed or partially functioning in the 16 of Yemen's 22 provinces that it reviewed. After 19 months of brutal bombing, Yemen's health facilities had only two doctors or fewer in 42 percent of the 276 surveyed districts.

Four hospitals run by Doctors Without Borders have also been bombed by the U.S.-backed, Saudi-led coalition, leading the international humanitarian group to withdraw from the country.

Amnesty International's new report only looks at the situation in Taiz in the past several months. It found that at least three hospitals have been shut down because of anti-Houthi rebels' threats against staff.

“There are dozens of armed men in the hospital. Am I running a hospital or a battalion?" the director of Al-Thawra Hospital, the largest in Taiz, said in the report. "The armed men will create any problem with you outside the hospital if you refuse them.”

As recently as Nov. 21, armed anti-Houthi forces raided Al-Thawra Hospital and threatened to kill medical staff if it was not shut down immediately. The rebels also reportedly tried to drag out Houthi fighters who were being treated in the hospital’s intensive care and recovery units.

“There can be no excuse for harassing medical staff or preventing doctors from carrying out their life-saving work," Luther stressed. "Attacks targeting health professionals or medical facilities are prohibited by international humanitarian law and can constitute war crimes.”

"By positioning fighters and military positions near medical facilities they have compromised the safety of hospitals and flouted their obligation to protect civilians under international law," he added.

Amnesty International noted that the Houthis have also launched attacks from near hospitals. Houthi militants have likewise attacked civilian infrastructure, and the rights group has documented war crimes committed by both sides of the war in Yemen.

The United Nations has however repeatedly reported that the U.S.-backed, Saudi-led coalition and its allied forces have been responsible for nearly two-thirds of civilian casualties, whereas the Houthis and allied forces loyal to former president Ali Abdullah Saleh have been behind less than one-fourth of civilian casualties. (Extremist groups like al-Qaida and ISIS have been responsible for the remaining attacks on civilians.)

More than 10,000 people have been killed in the war in Yemen, including at least 4,000 civilians. Thousands of more civilians have died from lack of access to food, clean water and medicine, which they have been prevented access to by a Saudi blockade, and by the coalition's intentional destruction of food production in hunger-stricken Yemen.

The U.S. and U.K. have sold billions of dollars in weapons and military equipment to Saudi Arabia, and are providing crucial intelligence and refueling assistance, without which the Saudi-led coalition would not be able to carry out its bombing campaign in Yemen.