White prosperity over racial equality: It's (still) the American way

Donald Trump's victory feels like an earthquake, but its roots run deep in America's history and priorities 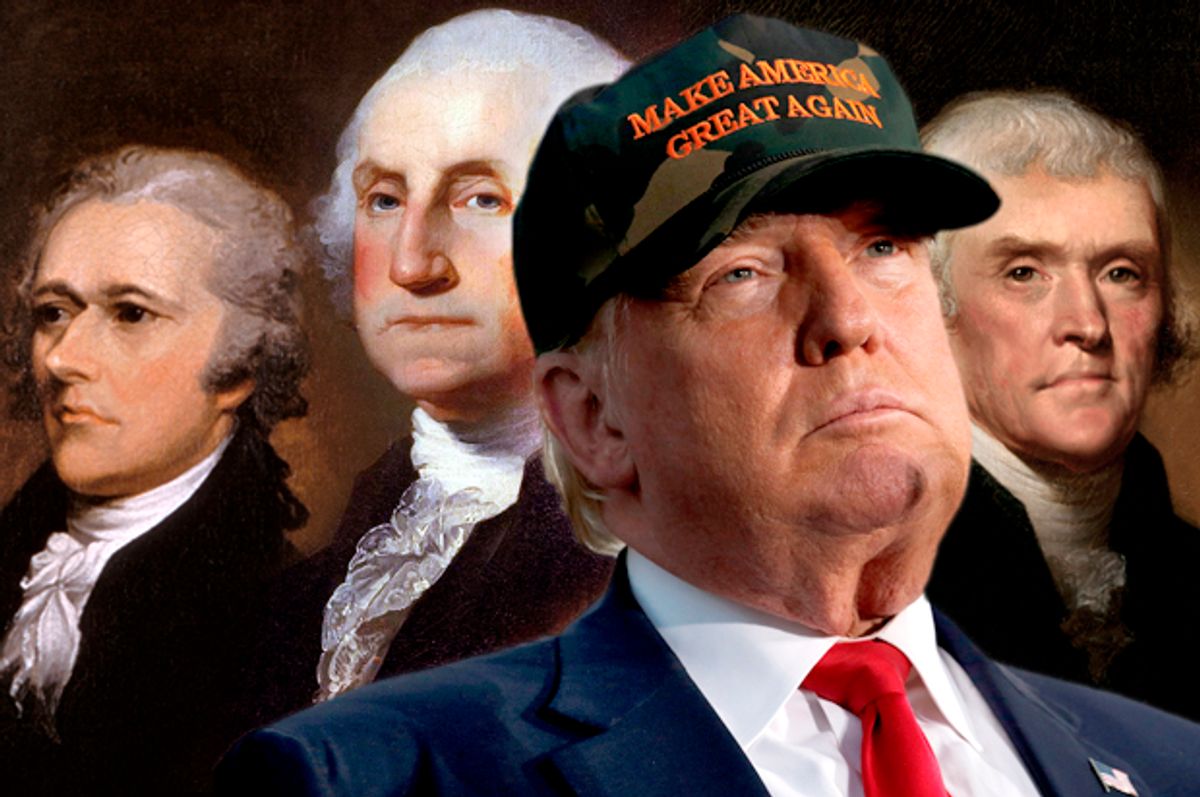 On November 8, 2016, individual voters confronted the imperfect legacy of the Founding Fathers. In this election, for the first time since the great rights revolutions of the 1960s, Americans confronted a candidate who openly preached prejudice and discriminatory programs, who hired and worked with known conspiracy theorists and white supremacist-friendly operatives who concocted racial animus to animate white Americans, and who was endorsed by the KKK. Like previous generations, many Americans in 2016 decided they would tolerate Trump’s expressions of bigotry, misogyny and cravenness because he promised them he would bring overseas jobs back to America, lower their health care costs, reduce their taxes and decrease job competition by eliminating the immigration of undocumented workers. Many Americans made the choice to tolerate this KKK-endorsed candidate — one who the Anti-Defamation League condemned for airing anti-Semitic advertisements — because he promised to make their lives more secure and that he would look out for them in ways the current political leaders had not and were not. And, yes, some people voted for Trump explicitly because he embraced a white nationalist, white power vision of America where their whiteness would bestow even greater privilege than it does now.

As a historian and a teacher I have been grappling with this election. Listening to students, contemplating American history, and teaching the 1828 election of Andrew Jackson have all been useful tools for understanding an election that has exposed our wide and deep misunderstandings and misgivings of each other. This election has shown that those issues are wider and deeper than many people wanted to acknowledge, and that those unresolved issues carry serious consequences. They also run much deeper into the past than we often discuss.

Yes, this election was an earthquake, but it was not entirely new. At its core, the rupture caused by the earthquake exposed a persistent and continuous vulnerability in the bedrock of the republic. For more than 200 years now, we have been unable to make equality part of economic prosperity in our determinations of national and personal security. Far too often, and for far too long, our nation’s economic prosperity has largely been defined as the prosperity of white Americans. Too many social conservatives decided the Supreme Court and overturning Roe v. Wade was more important than the physical safety and liberty of Muslims in America. Too many white workers decided the prospect of American manufacturing returning was more important than the dignity of Hispanic workers. As a nation, we have not yet joined human dignity and economics in a way that will enable us to fulfill that perfecting mission handed to us during the Founding Era.

At the Constitutional Convention in Philadelphia in 1787, the Founding Fathers made choices that haunt us to this day because we still largely follow their priorities around race and economics. By the time of that convention, most of the northern states had ratified state constitutions that gradually abolished slavery in the North. Many of those northern delegates, like John Adams, took seriously the words of the Declaration of Independence, that “all men are created equal.” We know they didn’t mean all men were equal to each other; the northern conventioneers were certainly racist, believing that people of African and American Indian descent were less capable than people of white western European descent. Many of them did, however, believe that slavery was a violation of what they saw as the “God-given” rights to life, liberty and the pursuit of happiness.

Those beliefs were tested in Philadelphia in 1787. The conventioneers were careful not to directly discuss slavery in the Constitution or in James Madison’s notes. But they dealt with the issue of slavery throughout the summer. The southern delegates repeatedly threatened to walk out and leave the union whenever challenges to their slave economy were discussed — restricting the importation of people, restricting immigration, taxing exports, determining state representation in the House of Representatives. Each time northern delegates were faced with the prospects of the union dissolving, they capitulated to southern demands. The 3/5 compromise and the prohibition on the restriction of the “immigration or importation” of people in Article I both reflect choices that separated white prosperity and individual liberty. They decided the potential economic stability and national security offered by a strong union with a strong federal government was more important at the time than fully enacting the principles of the Declaration of Independence. They decided the material comfort of white Americans trumped promoting a more universal human dignity, liberty and freedom.

Subsequent generations followed the lead of the Founding Era’s leaders: They tolerated bigotry and prejudicial policies in order to promote white prosperity and security. The generation immediately following the Founding Fathers made similar choices when the expansion of slavery threatened disunity in 1819. The Missouri Compromise reflects a familiar capitulation. White northern congressmen decided that in order to prevent violence among whites over slavery’s expansion in the West, they would allow slavery to exist in some regions but not others. They decided that a white prosperity predicated on the exploitation of slaves was preferable to white violence and disunity. Make no mistake about it: Northern industrialists wanted cheap southern cotton as much as southern planters wanted unfree labor. And for a time, that system worked to promote some white unity and prosperity.

That system failed in 1861, however, and President Lincoln and the Republican Party once again decided that the immediate economic and existential security of the (white) union trumped the expansion of human dignity. Lincoln refused to allow the South to secede in large part because secession would have threatened northern industrial prosperity and national security. And Americans understood that to mean white American safety and prosperity. Lincoln also understood that the only way the United States could eventually abolish slavery was if the slave states stayed in the union. Despite that, Lincoln refused to declare the Civil War a war against slavery until slaves and free blacks forced his hand by repeatedly running away to Union lines. Even then he embraced abolition as one among many tools for waging total war against the Confederates. This embrace of white priorities was not a surprise. After all, Lincoln’s vice president and successor, Andrew Johnson, famously declared “this is a country for white men.” The 13th Amendment abolishing slavery, then, can be viewed as a tool of Lincoln’s to make sure that white southerners re-entered the union with eyes wide open, finally acknowledging the war as, in the end, a war over slavery. Lincoln believed it was the only way to achieve white unity in the aftermath of war.

Repeatedly the federal government has chosen white prosperity and security over equality: the end of Reconstruction and the acceptance of the Jim Crow South, the Immigration Act of 1924. Even the much-revered Franklin Delano Roosevelt accepted the model of the Founders when he excluded African-Americans (though not by name) from Social Security and unemployment insurance benefits.

There is more to the 2016 election than pure demagoguery, though. The ghosts of past white movements opposed to elite rule include the Anti-Masonic zealots, Bacon’s Rebellion, The Paxton Boys Massacre, the Know-Nothing Party, the early form of the American Federation of Labor, and the Boston Busing Riots. Like 1828 and 2016, those movements emphasized white male prosperity and power when confronted with a challenge by what they considered at the time to be nonwhite people. Some of the movements were conspiratorial, some were violent armed rebellions. They all point to what happens when those in power do not adequately hear those who are struggling and hurting.

In the aftermath of the 2016 election, we need help engaging each other. It has become clear that the pundits, the pollsters, the middle class, the elites don’t know enough about the pain and fears of rural Americans and working-class Americans, in particular. And white people don’t know enough about the pain and fears of communities of color and religious minorities to adequately empathize with them. How do we deal with those tremendous vulnerabilities to our society? I am not sure. But Americans have at least once abandoned the model of the Founders. In 1964 and 1965, a southern white Democratic president — Lyndon B. Johnson — worked with Congress to pass the Civil Rights and Voting Rights Acts — maybe the most consequential pieces of legislation in American history. Many Americans then voluntarily abided by the new laws. Nearly a century of African-American legalized disenfranchisement and segregation ended. The new voting opportunities paved the way for tremendous increases in the number of African-American and female elected officials. And the new legal protections ushered in a new era in the struggle for gender equality. Johnson worked to pass those two laws because of the pressure put on him by Civil Rights Movement activists, and because he empathized with the struggles of African-Americans in the south. And he did so knowing he was jeopardizing the white Democratic unity his hero, Franklin Roosevelt, had tried to maintain during the New Deal. Johnson and many Americans demonstrated the effectiveness of citizen organizing and empathy in action, and I suspect both will be critical to the next steps in perfecting the union.

Darren Speece is the author of "Defending Giants: The Redwood Wars and the Transformation of American Environmental Politics" (University of Washington Press, 2016). He is the Assistant Dean of Students at Sidwell Friends School where he teaches courses on American History and Global Environmental History. Follow him @darrenspeece.