Andre 3000: The most ominous instrument in hip-hop

Picking his way through tragedy and turmoil, Andre 3000 makes carefully curated cameos as he goes 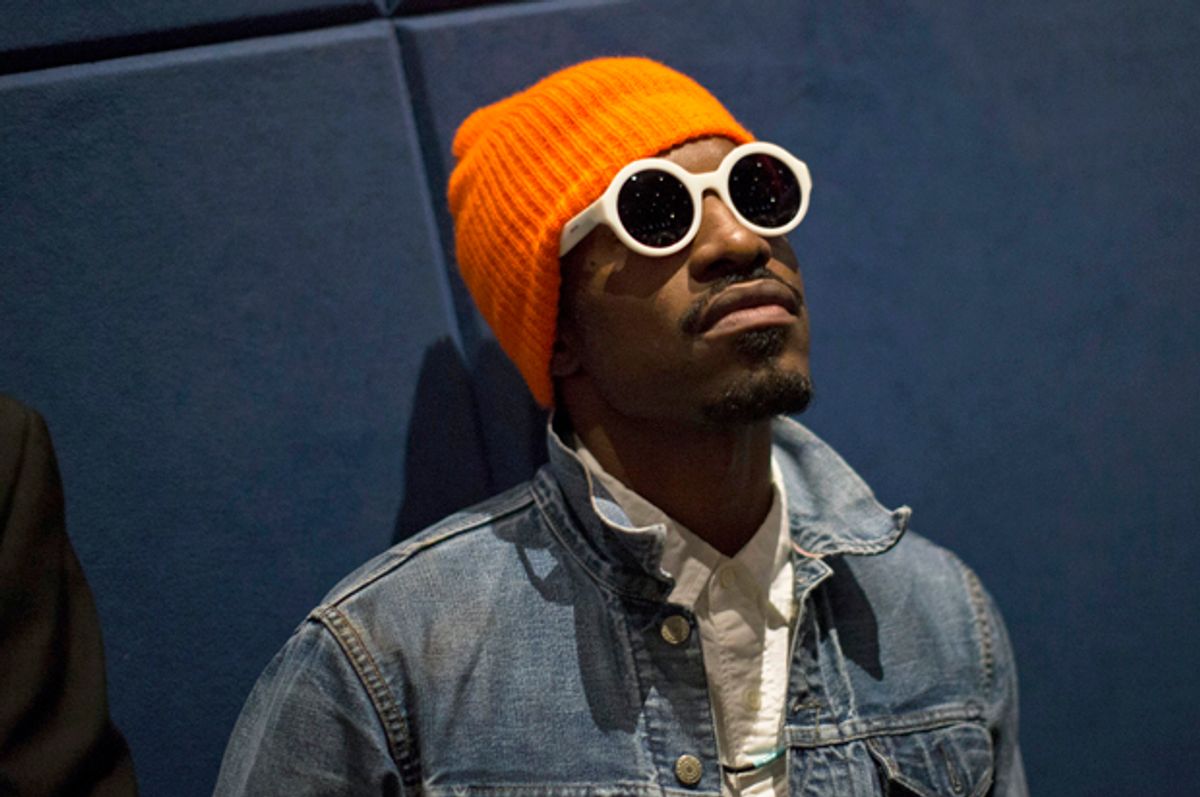 In the 10 years since Outkast released its last album, it’s been rare that Andre 3000’s unmistakable brassy voice has appeared over music. A few guest verses a year, and then there was Outkast’s 2014 reunion tour, where he and Big Boi played the hits. The tour’s opening night took place at Coachella, and for many fans Dré’s performance was disappointing. It was clear he was uncomfortable.

“They actually got André Benjamin the first night [at Coachella], and I clearly saw they don’t want André Benjamin. He loves what he’s done, but I hate cages, and sometimes nostalgia is a cage,” he said shortly thereafter in an interview. In the remaining shows, Dré wore full bodysuits, wigs, sunglasses. “It’s always easier to play characters,” he said.

Since Coachella, Dré’s been increasingly selective with his guest verses. When he does rap, he does it out of respect for the given artist. “[T]he only time I’m really inspired to write raps is if an artist that I enjoy invites me to their party,” he said in the same interview.

For those select few fortunate enough to book 3 Stacks, the going rate of 100 stacks is a bargain. An Andre guest spot is the highest form of hip-hop endorsement. And the songs that he’s appeared on — whether he’s speaking two words or rapping 300 — have consistently garnered ravenous blog coverage and critical praise. The paradox here is that most of the artists Dré works with don’t need the Andre 3000 seal of approval, the blog attention or even the help currying critics’ favor. Drake, Beyonce, Lil Wayne, Frank Ocean, Kanye West, Travis Scott and so on — with few exceptions, these artists are set.

Take for instance A Tribe Called Quest. Earlier this month, Tribe released "We Got It From Here . . . Thank You 4 Your Service," its first album in 18 years and what they claim will be their last. The album is a departure from their previous work, most notably because it’s desaturated. The color and vivrancy that has infused their sound is intentionally stripped; much of what remains is vacuous, removed from place but for the occasional Caribbean flourish.

Sonically and lyrically, "We Got It From Here . . ." is informed by the present moment and by Tribe’s present moment — each, bleak. If you’ve not been paying attention, race relations in America are a tad testy, Donald Trump was just elected president, and earlier this year, in the midst of recording, Phife Dawg passed away. The album isn’t an hour of despair though. Rather, it reflects the simultaneous grief and inspiration that can come with loss. The tongue-in-cheek opening track, “The Space Program,” plays on the notion that Black people can’t find space . . . even in outer space. But the song’s chorus includes the rallying cry, “Gotta get it together forever/ Gotta get it together for brothers/ Gotta get it together for sisters.” Throughout, classic Tribe empowerment comingles with desolation.

The latter is where André 3000 comes in. Dré, who, according to Q-Tip, recorded collaboratively, in the studio with Tribe, is featured on the album’s sixth track, “Kids . . . ” It’s the record’s most unsettling moment. Dré raps slowly on an ominous beat, playing the role of the cynical adult to Q-Tip’s hood-situated aspirational child. “I ain't even gon' lie, I was probably high / Just forgot to call you back, simple as that,” he begins. And later, on the repeating hook, “Kids, don't you know how all this shit is fantasy?”

A similar despondency can be found in Dré’s other guest verses from this year. On Frank Ocean’s "Blonde," he voices the culmination of Frank’s depression. Frank’s “Solo” is about solitude; Dré’s “Solo (Reprise)” is about feeling “so low.” In it, he raps — practically mutters — quickly over a haunting beat which, in the course of 80 seconds, swarms, buzzes, and shatters: “So low that I can see under the skirt of an ant/ So low that I don't get high no more/ When I ‘Geronimo!,’ I just go ‘Eh.’” (His verse on Travis Scott’s “the ends” is so similar in its gloominess that it reads like a continuation: “Eh, today I'mma take a cheque and cancel left/ I guess it's all survival but please be careful/ I gave up on the Bible long time ago/ I hope it ain't give up on me, I don't know . . . ”)

The only other song that André 3000 has been featured on this year is Kanye West’s “30 Hours.” There, Dré’s voice is slowed, distorted, blended with an Arthur Russell sample. He only speaks two words, the eponymous hook, “thirty hours,” but his intonation adds clouds to the already overcast track.

On each of these songs, what a listener gets diverges from what the name Andre 3000 connotes. Dré wasn’t always spitting roses as a member of Outkast. But from 1994, when Outkast released its debut album, "Southernplayalisticadillacmuzik," to 2004, when they released its penultimate album, "Speakerboxx/The Love Below," André 3000 was the most flamboyant character in hip-hop. He was painting with a similarly bright palette that Tribe, one of his biggest influences, painted with before him. He was funkier and more lascivious though, always dashing between Atlanta and Mars.

Now, like Tribe, he seems to be divorced from place. He’s as dexterous as ever when he raps, but those moments come as infrequent supporting roles. And off the mic, when he’s given interviews, he’s seemed increasingly unsure of himself. This past April, after Phife Dawg’s death he commented on how quickly the hip-hop tides change, saying “when I see [Lil] Wayne and Young Thug, I'm like, ‘Ohhh, I can't keep up with that shit. It's so dope.’” Elsewhere he’s talked about the “magic window” that constitutes an artist’s ability to tap into the zeitgeist. “I think you can go beyond your magic window and still be the greatest instrumentalist and greatest artist, but anything outside that magic window is just not resonating the same."

For better or worse, André 3000 seems completely uninterested in anything outside that magic window — less because he’s worried about tainting his legacy than because it’s just boring to him. And so he’s left rapping occasionally, playing the recurring part of a depressive. The question is whether these recent dark verses represent the real Andre Benjamin or whether he’s playing characters. He’s talked about being in a rut, about how these past few years have been tough for him, with his parents dying in 2013 and 2014, respectively, and with his love life dramatically changing after his son moved in with him. So I’d put my money on the former. But maybe it’s some combination. Really, it doesn’t matter. As much as we may want him to get back in the UFO and play with funky aliens, he’d rather explore a black hole. And there’s a place for that in modern hip-hop.