How do we learn to stop worrying and keep loving "Vikings"?

When the subject of a TV favorite happens to be co-opted by terrible people, some of us may view it differently 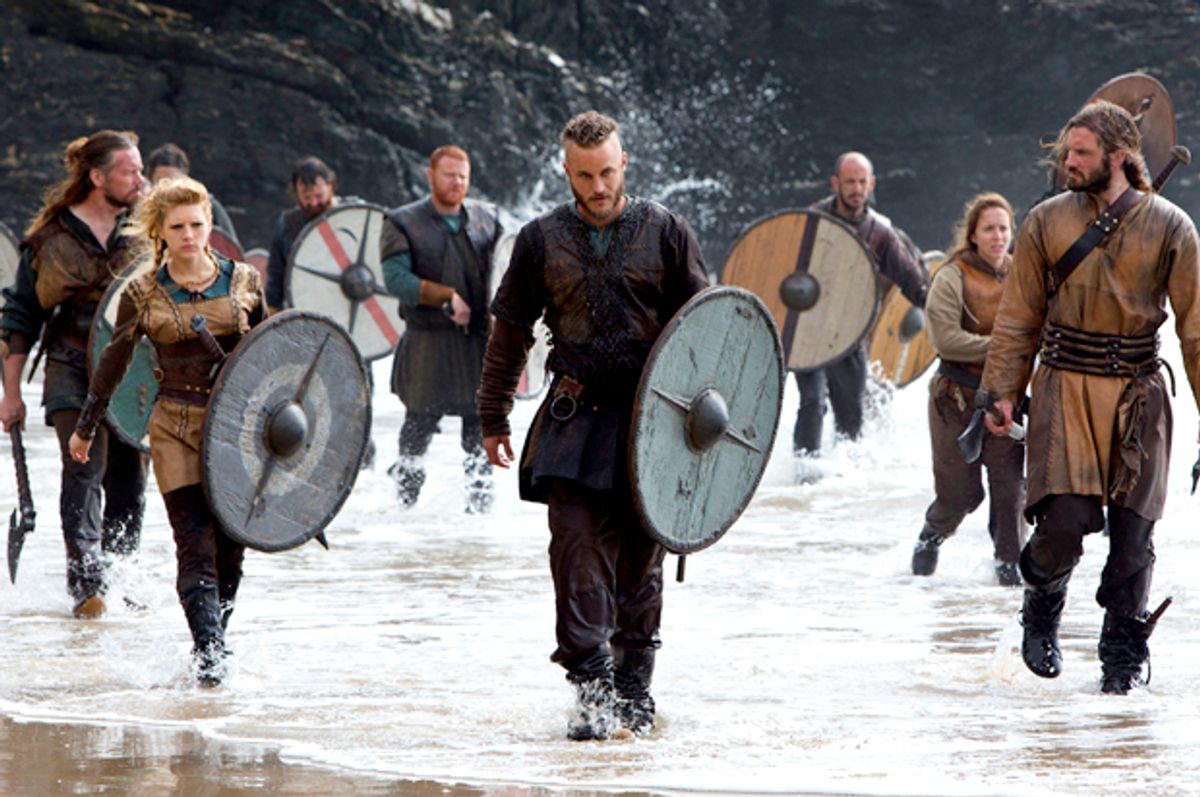 There’s a scene in the midseason finale of “Vikings” when the long-absent king of the Northmen, Ragnar Lothbrok (Travis Fimmel) returns to his seat of power, Kattegat, to find it much changed. He strolls through the marketplace and sees his fellow Northmen haggling over tables strewn with colorful spices and unusual items sold by merchants with dark hair and brown faces.

While Ragnar was away, his wife Aslaug (Alyssa Sutherland) presided over an expansion of commerce in Kattegat. Longtime viewers may notice the difference inside the longhouse almost immediately; there are bolder hues on the walls. The women wear brightly dyed clothing that stands out against the gray climate.

Ragnar’s facial expression doesn’t betray much of a reaction to this one way or another, but I noticed the difference. Chalk it up to decades of watching TV series featuring mostly white casts; even today, during a television season relatively rich in stories reflected from non-Caucasian paradigms, I still find brown and black faces navigating mostly white fictional spaces remarkable.

And History’s “Vikings” is the tale of a very white space: the Viking age, pre-Christian Scandinavia of 1,000 years ago, where a person’s worth was measured by might.

“Vikings” was created and is written by Michael Hirst, the screenwriter behind the Oscar-winning “Elizabeth” and Showtime’s sexed-up take on the life and times of Henry VIII, “The Tudors.” (The star of the latter, Jonathan Rhys Meyers, has joined the fifth season cast of “Vikings,” which is currently in production.)

As he has with other works, Hirst styles “Vikings” as an operatic family drama above all. Said family just happens to be the subject of legend. Under King Ragnar, a ruler who began as a farmer but fought his way to the top with a mixture of charisma, political ruthlessness and superior fighting skills, the Vikings expanded their reach into distant lands.

Thus far in the series, Ragnar has led lucrative raids in England and stormed Paris. A number of his people settled a portion of medieval England, known as Wessex, only to have the region’s duplicitous King Ecbert (Linus Roache) break a treaty and wipe them out. Ragnar hid this development to protect his political legacy, but as of the back half of the fourth season kicks off Wednesday at 9 p.m. his fellow Vikings in Kattegat in know they were deceived.

Then again, Ragnar conveniently disappears for several years, allowing the series to jump forward in time. Ragnar’s son Bjorn (Alexander Ludwig) is now a man of renown and poised to led a fleet into the Mediterranean, which, according to historical accounts, will eventually bring him to Italy, Spain and the African continent.

This is a fascinating and somewhat known chapter of history and one referenced in several films and TV series, including the Antonio Banderas vehicle “The 13th Warrior.” But the first half of season 4 aired in a vastly different political era, and our cultural climate has taken on an uglier tone that could affect my enjoyment of these exploits.

“Vikings” remains one of my favorite current series largely due to my abiding affection for Katheryn Winnick’s depiction of the formidable Lagertha. Ragnar’s ex-wife is a shield maiden who secured an earldom for herself by ending two abusive relationships with her blade, demonstrating a level of bad-assery we don't often see in series. Surely there’s a seat waiting for Lagertha in television’s Valhalla alongside Buffy, Xena, Wonder Woman and other strong TV heroines.

Other viewers must feel the same way about Bjorn or even Ragnar’s mercurial best friend Floki (Gustaf Skarsgård). Though some grade school textbooks tell the story of Bjorn Ironside, Ragnar’s other sons Ivar (Alex Høgh Andersen), Ubbe (Jordan Patrick Smith), Hvitserk (Marco Ilsø) and Sigurd (David Lindstron) also made their mark, and as we see in new episodes, they’re not exactly charmers.

The back half of this season spotlights Ivar, who is coming into his own as a conqueror in spite of not having the use of his legs. (In historical accounts he’s referred to as Ivar the Boneless.) If Andersen didn’t portray him as a dangerous and somewhat sociopathic young man, he’d be quite the role model. But in this unforgiving culture, according to tradition, Ivar should have been left in the woods to die. He owes a debt to mercy for his existence, but surviving this world requires a sharply honed barbarism.

“Vikings” is stocked with such compelling figures — people who like to cause trouble and behave nobly in one moment and are self-serving, devious, even murderous in the next. All successful series owe their popularity as much to their ability to connect with viewers on a visceral level as they do to the quality of their storytelling. If we didn’t empathize with these characters, if we didn’t see something of ourselves in them, we wouldn’t care enough to watch.

And yet, lurking in the back of my mind right now is the knowledge that these stories are part of a culture and religion that’s been co-opted by racists. Christianity is still the primary religion of white nationalists, but Viking mythology is playing an increasingly prominent role in supremacy movements, much to the distress of nonracist modern worshipers of those deities.

Mainstream culture witnessed that brand of racism rear its ugly head in 2010, when black British actor Idris Elba was cast as the Norse god Heimdall in Marvel’s “Thor,” prompting outrage on social media from white supremacists. (Aside from “Vikings,” Marvel provides the most lasting portrayal of Norse mythology in popular culture.) That turned out just fine for Marvel and the franchise's fans, and Elba is reported to be receiving an expanded role for “Thor: Ragnarok,” due out in 2017.

“Vikings” has no reason to apologize for the appropriation of the culture upon which it’s based by ignorant, hateful people. It still distressing that the inflated presence of bigotry in everyday life threatens to affect my consumption of this prime-time pleasure. The prospect of Bjorn venturing into the Mediterranean and North African territories is something for me to look forward to as a viewer who enjoys Hirst’s writing and Ludwig's thoughtful portrayal of the character.

As an African-American woman, I also harbor some mild dread over the depiction of this excursion. Nothing vexes a black nerd like racists loudly decrying diversity in spaces that they perceive to be exclusively theirs. How will bigots react to seeing Bjorn and his crew putting swords to brown people? It's not a pleasurable thought.

As is true with any historically informed scripted work, Hirst’s telling of Ragnar Lothbrok’s story is led by an ample portion of imagination. As much as Hirst is credited for getting a great deal correct, he’s also weathered critiques for inaccurately depicting some aspects and, in more farfetched cases, surreptitiously making Ragnar and his armies stand-ins for liberals, with the ancient English monarchies playing the role of conservative movements. Again, popular TV plots lead to a variety of interpretations.

But the depiction of religion in “Vikings” is what makes it extraordinary — specifically, what happens when belief systems spread and rival political hierarchies collide.

The series is rare in its presentation from the perspective of the fearsome, misunderstood culture of the Vikings and with polytheist religion clashing against another faith, Christianity, whose power is growing across the known world. Throughout “Vikings” Ragnar’s interactions with Christianity have been tinged with curiosity and at times its philosophies have affected his decisions. This was largely due to his friendship with Athelstan, a former Christian monk who was his slave before Ragnar freed him.

But the Viking’s openness to Christianity has not been looked upon kindly by Norse god worshippers — especially Floki, whose hatred of Athelstan eventually blossoms into homicidal rage.

Floki is a zealot, though. In large part, the Christians depicted are less open-minded than their Norse neighbors in ”Vikings”; they see the Northmen and their gods as uncivilized heathens when, in fact, Hirst has written them as more egalitarian and democratic than the rulers of Christendom.

The Vikings' reputation for violence isn’t unfounded, of course, and the actions they commit in the name of their gods can be unsparing and atrocious. A Christian missionary who visited Kattegat in season 3 finds that out the hard way when Aslaug challenges him to prove his god’s strength forcing him to hold red-hot metal in his bare hands. Let’s just say a divine miracle does not happen than day.

Worshippers of the Norse gods can be cruel. Then again, the same can be said of Christians throughout the ages.

And as “Vikings” moves forward, I expect the story will force fans to continually shift their assessments of the characters with whom they closely empathize — figures who still earn their empathy in spite of the fact that they’ve killed out of cold envy or to secure power, though such political moves sometimes result in the deaths of innocents, including trusted allies.

Ragnar has long been such a figure, a man who turned a captive into a bosom friend at one point, only to later strangle to death his slave turned lover. (That woman, Yidu (Dianne Doan) also is the first nonwhite major character to appear in this series.) It’s excusable for a Viking ruler to kill; it’s unacceptable for him to be disgraced, though.

And Ragnar’s abject humility at this point in the series may feel painfully familiar. The Norse king is a man accustomed to triumph, who prides himself in having the love of his people. But defeat and physical humiliation has destroyed Ragnar's political influence and his alliances are in disarray.

Knowing this, the three latest episodes feel intentionally elegiac, as though Hirst is preparing viewers to make way for the ascension of Bjorn and his brothers and the death of Ragnar. A passing of the torch is inevitable; the storybooks tell us as much, and the series is called “Vikings” to accommodate that idea.

Exploration has been good to Ragnar’s people, and “Vikings” has been generous in satisfying its dedicated viewers. But change is frightening, especially in difficult times. We all need shows that inspire as much as they thrill us, to shore us up against the real world’s assaults on the spirit, and I hope that “Vikings” continues to do that for all comers. The only way to know whether it fulfills that mission is to sail into these next episodes on faith.