Donald Trump's surveillance state: All the tools to suppress dissent and kill free speech are already in place

In the wrong (read: small) hands, the post-9/11 surveillance apparatus can be a dangerous political weapon 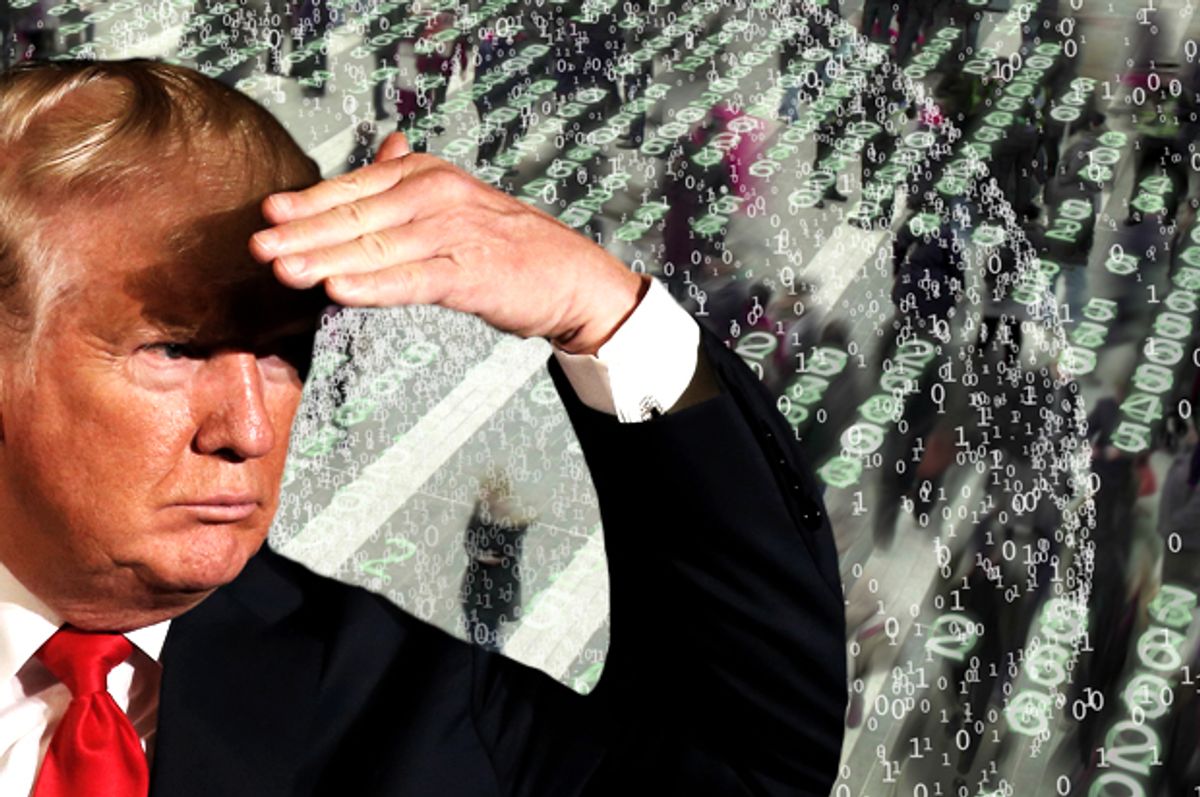 When Donald Trump takes office in January, he will inherit a surveillance state that George W. Bush largely created and that President Obama refused to rein in. As has been explained before, privacy is vital to a democracy, and the fate of free speech and the free press are in the hands of a thin-skinned bully who doesn't seem to care for them.

Richards also explained that American agencies have created files on dissidents and used their power to disrupt political expression.

“The most extreme case is that of the FBI’s surveillance of Martin Luther King, in which it used evidence of an extra-marital affair he was having to attempt to convince him to kill himself,” Richards said. “Put simply, widespread unconstrained government surveillance has a huge potential for abuse and can be deeply corrosive of democratic culture, free speech, and other civil liberties.”

When people know they're being watched, they tend to not speak out. If you're considering protesting, writing about the president or acting in any political manner, you're less likely to do so when you think those you're opposing are keeping tabs on you.

“There's fairly significant evidence to back the idea that when you think you're being watched you tend to conform, in large part because humans are fairly conformist animals, and we like making sure that our neighbors don't hate us,” Margot Kaminski, an assistant professor of law at Ohio State University, told Salon. “This is the reason the Stasi established its version of a surveillance state in East Germany, because if people think they're being watched all the time, they're more likely to move toward the mean, which means less dissent.”

Considering Donald Trump is known for being a person who relishes revenge, it seems highly plausible that he will use the vast powers of the presidency to pursue personal vendettas. A man who can't stop himself from writing an angry tweet in the middle of the night when someone offends him is likely not someone who will crack open a book on civil liberties before targeting a political enemy with surveillance powers and more. With Trump in the Oval Office, Richard Nixon's paranoia may look quaint by comparison.

“There are classical historical examples of this,” Kaminski said. “You have Nixon using the DOJ and IRS to go after political enemies, you have Hoover building dossiers on political dissidents and most prominently the FBI's file on Martin Luther King Jr., which they used specifically to try to discourage him from activism. There's a long line of unfortunate historic precedents.”

Something Nixon and Hoover and the like did not have is the ability to create complex pictures of every American by harnessing the power of “big data.” Big data is a large trove of information that can be analyzed to look for patterns and associations. If I know what you bought on Amazon, what you said on Facebook, who you're friends with and what you read, I can get a very detailed idea of who you are. This becomes a problem when someone in power wants to target a specific group of people, like Muslims or immigrants.

“The private companies that tout themselves as the beneficiaries of big data really need to think very carefully about, even more so now, their relationships with government and the impact of the tools they're building,” Kaminski said.

Trump only stoked those concerns by selecting  Rep. Mike Pompeo (R-Kan.) to run the CIA. Pompeo wrote in an op-ed earlier this year that the we needed a “a fundamental upgrade to America’s surveillance capabilities.” Sen. Rand Paul (R-Ky.) is already questioning Trump's selection of Pompeo, because he's concerned about privacy rights.

Our surveillance state has few checks and balances, and it is controlled almost exclusively by the executive branch. If President Obama wants to use his final months wisely, he should do everything he can to change this. In absence of that, we can only rely on a few vocal Democrats and Republicans in Congress, including Sen. Ron Wyden (D-Ore.) and Sen. Rand Paul (R-Ky.), to stand between us and an all-seeing, all-hearing orange-skinned Orwellian nightmare.