The teen cult classic you’ve been waiting for: Catch “The Edge of Seventeen” in theaters while you still can

The glorious anguish of teenage struggle rendered in a loving, if antic film 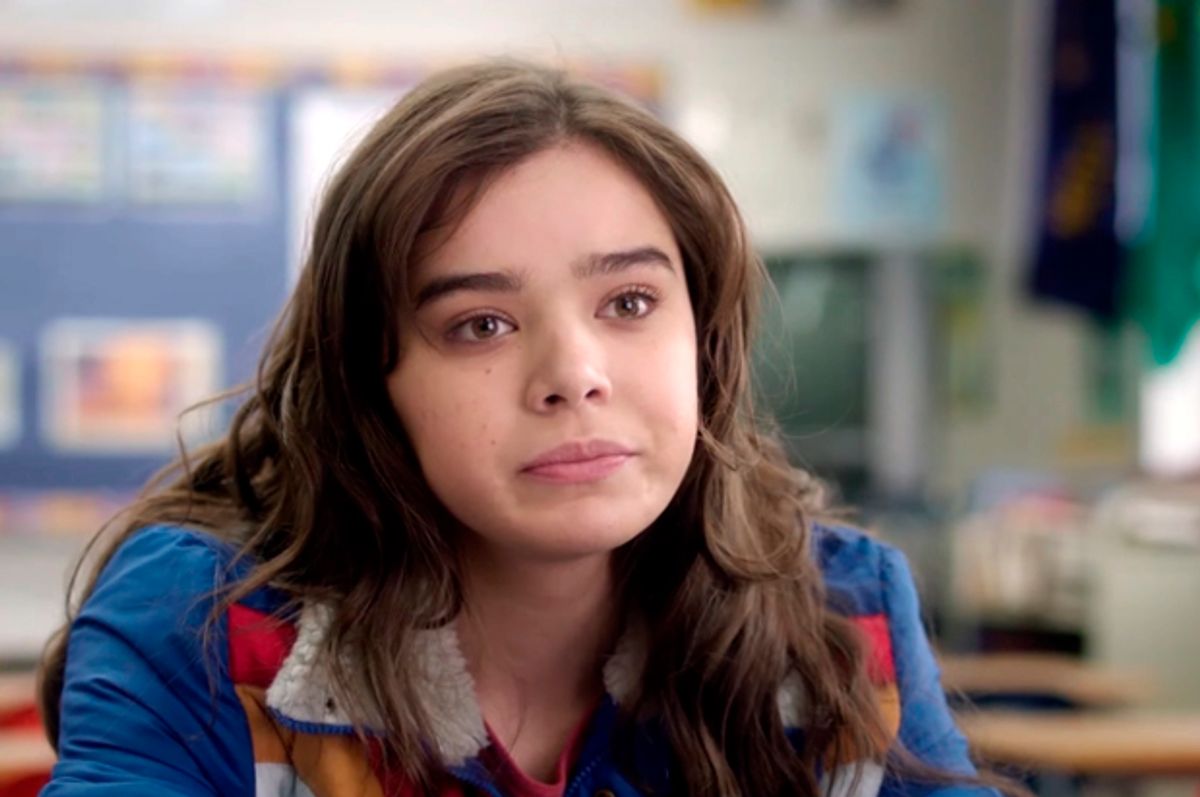 Nothing happens quite the way you might expect it to in “The Edge of Seventeen,” the wisest and smartest teen comedy in years. That’s a pretty good metaphor for the unbearable lightness of being a teenager, those uncertain years when everything you want feels unreachable and everything you are feels unbearable.

As Nadine points out, one of the worst parts about life is knowing that you’re stuck with yourself for the next 60 or so years and not being able to do anything about it. How lame.

Even as a young girl, Nadine (Hailee Steinfeld) always felt she lived in the shadow of her older brother. Darian (Blake Jenner) is the definition of a golden child, a varsity jock and straight-A student who still puts his report cards on his refrigerator. Nadine has been the type of girl who would lock the car door to keep herself from having to go to school, where she had few friends.

Her mother had to drag her out kicking and screaming and she still does this. Nadine wouldn’t let a thing like maturity — or whatever passes for maturity when you’re 16 — stop her from continuing the ritual. She’s the kind of girl who looks at “Daria” like it's a Bible.

As a blossoming malcontent, Nadine spends her days terrorizing her de facto favorite professor Mr. Bruner (Woody Harrelson). She likes him because, at least on the surface, he isn’t very nice to her, and this more or less validates her view of herself. “I'm probably gonna jump off an overpass in front of a semi or a U-Haul — just not a bus,” Nadine warns him. “I'm not gonna be a dick and make people watch.”

“Good luck with that,” Bruner responds.

What’s so refreshing about “The Edge of Seventeen” is how expertly it upends all the tired tropes of teen comedies, ranging from “Love Finds Andy Hardy” to “The Breakfast Club.” Unlike the plot in “Easy A,” which expects viewers to believe that Emma Stone can’t get a date, Nadine isn’t cosmetically an outcast. She jokes about killing herself, but her problems are real.

After her father died, Nadine was left to be raised by her mother, Mona (Kyra Sedgwick), an online-dating addict whose way of bonding with Nadine is to moan about how she doesn’t understand her. Nadine’s best friend (Haley Lu Richardson) begins dating her brother and hanging out with his popular friends, seemingly confirming how alone Nadine truly is.

The film slyly comments on its own subversion and refusal to conform to stereotypes, in favor of becoming something more honest and true to life. “The Edge of Seventeen” is filled with moments that are at once acutely observed and unlike anything you’ve seen before from the genre. For instance, her love interest is her dorky Asian best friend, a role traditionally relegated to the wacky sidekick, like Long Duk Dong in “Sixteen Candles.” On their first date, Nadine thinks she has him pegged. “Your mom gets on you about your grades and practicing your instruments,” she says, guessing what his family is like. Nadine quickly realizes her assumptions are totally racist.

Erwin (Hayden Szeto) is actually a parachute kid whose wealthy parents live in South Korea and left him to fend for himself. His house, as large as it is empty, is so ornate it looks like it belongs to Norma Desmond. It even has a waterfall in the backyard. Erwin should be living the teen dream, a life of infinite riches and no supervision, but he isn’t. If Nadine could see past her own issues, she would understand that she isn’t the only person who is lonely.

As a protagonist, Nadine is selfish, infuriating, self-deprecating, observant and altogether wonderful. In most teen comedies, young people talk like jaded graduate students and act like adult screenwriters living out their high school fantasies. There’s a too-grown-up wisdom that comes with looking back and knowing how you would do it all differently if you could.

But first-timer Kelly Fremon Craig, directing from her own script, astutely allows her teenagers to sound like teenagers. Nadine struggles to talk to the guy for whom she pines (Alexander Calvert), who is quiet enough to seem mysterious and has indie band hair. Nadine pours her pent-up emotions into a Facebook message: “We can do it in the Pet Land stockroom.”

Nadine’s reveries of illicit romance are ruined when her crush turns out to be less than her ideal, but no one in “The Edge of Seventeen” is a villain. Darian, who is looking at colleges close to home because he knows his mother will fall apart without him, is responsible and wants what’s best for his family. Craig has such empathy for her characters that you can see parts of yourself reflected in all these people. It’s reminiscent of James L. Brooks, the man behind “Broadcast News” and “Terms of Endearment,” who writes flawed characters with love and understanding. He serves as a producer on the film.

Best of all, Hailee Steinfeld makes the most of what should be a star-making role for her. Steinfeld has always been good. At age 12, she was nominated for her first Oscar as the plucky Mattie Ross in the Coen Brothers’ remake of “True Grit” and became one of the youngest people ever shortlisted for an Academy Award. Steinfeld, an accomplished singer, proved her considerable musical talents in “Begin Again” and “Pitch Perfect 2.” But the promising young star, now 19, has never been better than she is here, and it’s as if the fullness of her talents have finally come into focus. Sometimes you just have to see an actor in the right part to know what he or she is truly capable of.

That’s why it’s such a shame that the movie that should be Steinfeld’s breakout is behind falling behind in the box office. Its studio, STX, unwisely decided to open the film against “Fantastic Beasts and Where to Find Them,” which plays to the exact same demographics. A spin-off of "Harry Potter," one of the most beloved film franchises in history, it made $74 million its first weekend in theaters. “The Edge of Seventeen” earned just $4 million.

In a movie landscape where everything is a copy of something else, “The Edge of Seventeen” is unique and unforgettable, a movie that captures alienation and the fear that comes with it. Like “Ghost World” and “Heathers,” other movies aimed at smart girls and their older sisters, Craig’s film will find its cult following as its audience catches up with it. If “The Edge of Seventeen” doesn’t become a huge hit when it starts streaming on Netflix, then clearly I don’t know anything about teenagers. This sure-to-be classic will get its due sooner or later, but let’s hope it’s the former.