Brooke Guinan is the first out trans woman on the FDNY, where being female is already a challenge 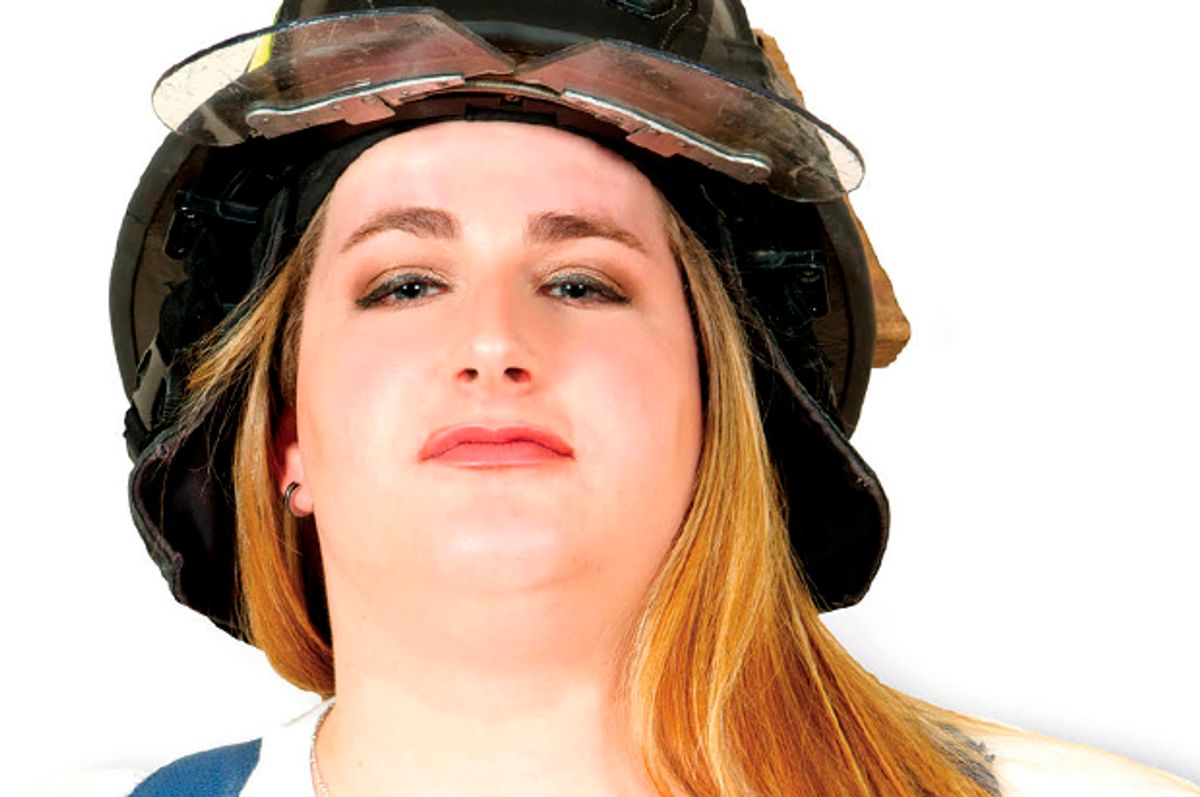 Brooke Guinan came out twice. As an 11-year-old growing up in Seiden, New York, she came out to her mother as gay after staying up every single night crying. A theater kid who felt most at home when she was on stage, playing a part, Brooke always knew that she didn’t fit into the role assigned her.

Upon graduating college, she enrolled in the Fire Department of the City of New York after going to work with her father, George, who is a firefighter like his father before him. During her childhood, Brooke worshipped superheroes, people she believed “set their own moral compass.” By becoming part of the family business, she wanted to be her own hero.

Shortly after joining the department, Brooke came out once more — this time as a transgender woman. Transitioning on the force made her the first out trans firefighter in the history of the FDNY, an agency that has been notoriously slow to change.

That journey is documented in “Woman on Fire,” a new film by Julie Sokolow that premiered last week at Doc NYC. The Pittsburgh-based filmmaker reached out to Brooke after a photo of her went viral on the internet in 2014, in which Guinan posed for an LGBT awareness campaign. Dressed in her gear, Brooke stands defiantly with her hands on her hips. Her T-shirt is proud and unapologetic. It reads, “So Trans So What.”

Sokolow, whose previous feature followed a man with Asperger’s syndrome as he navigates the dating world, said Brooke’s story was one she hadn’t seen before.

“What I like about all the documentaries I’ve done to date is that they’re about people I find heroic or fascinating,” she told Salon. “It was the story, first and foremost, of a trans person coming into the spotlight as a hero and not as a victim of some horrible tragedy, as often happens."

Continued Sokolow, "This is the future of the trans narrative going forward — getting away from trans people only being in the headlines when there’s been a murder or someone’s been deprived of a basic human right. I’d like to know about the accomplishments of trans individuals.”

After coming out to their families, many trans people are ostracized or forced out of their homes. Forty-one percent of homeless youth identify as LGBT, according to the Williams Institute, an LGBT think tank at the University of California Los Angeles. Brooke, however, was accepted by her conservative father, a Republican 9/11 first responder who became one of her biggest advocates.

Being New York’s first out trans firefighter hasn’t always been easy, as Guinan told Salon. This reflects the struggles that the FDNY continues to face in embracing diversity within its ranks, especially when it comes to women on the force.

Fighting for inclusion in the FDNY

George Guinan remembers what happened “that night” differently than his daughter does. In a heartbreaking moment in “Woman on Fire,” he recalls an altercation between Brooke and her co-workers shortly after she began being more open about her identity at her firehouse.

“At social events, she found herself being mocked and made fun of,” Guinan claims in the documentary. “There was a social gathering, a boys’ night out. One of the people who was not accepting of Brooke took a pitcher of beer and poured it over her head." He adds, "Why should anyone have to stand for something like that? You’re in a place where everybody’s having a good time. Why do you need to make fun of somebody to that degree in front of all your comrades and people you work with?”

Brooke, who is reluctant to speak about what took place, called it “her father’s story.”

For one, Brooke said, it was a fundraiser for throat cancer not a social gathering. She appeared at the benefit in tight jeans and a lavender shirt, carrying a tote bag emblazoned with the phrase “Love and Peace.” Brooke also began growing her hair out, much to the dismay of her colleagues, who she claimed simply “didn’t know how to handle it” and lashed out.

“They felt a need to let me know how much of a freak they thought I was,” Brooke said. “For the first time ever, I felt unsafe. I had to leave.”

Sarinya Srisakul, the first Asian-American woman to serve in the FDNY, said that such altercations are common as women and LGBT people fight for inclusion in a department that remains overwhelmingly white and male. Just 58 women are active firefighters in New York City in a workforce of more than 10,000, the lowest such total in the nation. What’s particularly sobering about that figure is that while small, it’s actually a record for the department. When Srisakul graduated the academy in 2005, there were fewer than 3o other women in the department.

“I used to be the only woman in my firehouse,” Srisakul said. “Now there are a bunch of us.”

Female firefighters were formally admitted into the FDNY in 1982 following a lawsuit by Brenda Berkman. Her gender discrimination suit alleged that the physical requirements of the department test set up women to fail, and after she won her case, new policies were put in place. Forty women passed the test that year, but they faced numerous obstacles in the field. One woman, Ella McNair, was stabbed by a co-worker, as reported in the 2006 documentary "Taking the Heat." Another was sexually assaulted outside the firehouse.

More recently, Srisakul said, a female firefighter had feces smeared on a toilet seat after a co-worker broke into the women’s facilities. The FDNY has investigated the incident but no action has been taken. Most houses in New York City, however, are not equipped with female bathrooms at all, representing a challenge for the women receiving a placement after graduating from the academy.

“We’re still having fundamental issues making sure our hygiene is taken care of as women,” said Regina Wilson, who has served as a firefighter for 17 years. When she was hired in 1999, Wilson said, she became the first black woman hired in 15 years — following the wave of recruits after the initial gender discrimination suit in the 1980s. Throughout her time on the force, many rank-and-file members have remained hostile to basic gender accommodations, viewing them as “special privileges,” she claimed.

“A lot of the guys on these jobs think that us having a female bathroom, we are getting something extra,” Wilson said. “We don’t deserve it.”

There are many other formal and informal barriers that keep the numbers of women in the FDNY low. For a long time, there was an organization called Merit Matters that actively discouraged the department from doing outreach to women and minority communities. The group used phrases like “dumbing down the job” and “lowering standards” to send the message that increasing the number of female firefighters would be an affront to the profession.

In addition to reports of hazing during the testing process, many women aren’t able to try out for the FDNY at all. New York sets its age cap for recruits at 28 years old, the strictest requirement for any department in the country. Although younger recruits are viewed as having greater stamina than their older counterparts, most departments in other cities set the limit at 35, if they have age restrictions at all. Legislation proposed this year by New York Councilman Andy King would set the cap at 36, which he believes would open the job to a greater pool of candidates.

“If you’re not in shape, you’re not going to get hired anyway,” he told the New York Daily News. “In this day and age, 36 is not old.”

Srisakul argued that many women raise families and send their children to college before entering the workforce. Thus they might not think about joining the FDNY until their 30s or 40s.

The slow road to progress

Brooke’s example, though, shows that the FDNY is changing — even though that process will take years, likely decades. Mayor Bill de Blasio passed legislation last year that requires increased reporting on the racial and gender makeup of FDNY recruits, in order to promote transparency in the hiring process.

Guinan claims that the department has been “incredibly supportive” of her transition.

After she was moved out of her firehouse, Brooke accepted a position working behind the scenes, helping to boost diversity in the FDNY through recruitment. Following a stint back in the field, she became the department’s first-ever LGBTQ outreach coordinator last year, a role the FDNY created specifically for her. In her new position, Guinan works to create opportunities for mentoring LGBTQ youth. She is also developing a training plan to help firefighters deal with the increasing diversity in their ranks, as well as arranging for the department’s first trans-inclusive bathrooms.

In the meantime, one of the biggest challenges in bringing the department into the 21st century is having women view themselves as capable of doing the job. Although boys might grow up seeing examples of firefighters that look like them, girls rarely do — especially when it comes to women of color. Frequent hit pieces from publications like the New York Post, which frequently targets female recruits who fail the physical exam, further discourages women from trying out for the force.

Wilson sees this all the time. The first female president of Vulcan Society, an African-American group pushing for greater racial inclusion in FDNY, she gave a talk last year where she asked audience members close their eyes and to visualize what a firefighter looks like. Did that person look like her? The majority said no. When she’s out in the field, dressed in her gear, Wilson said, people still ask if she’s really a firefighter. They can’t believe it.

“I’ve been fighting to belong for 17 years,” she said/ “And I’m still fighting to this day.”