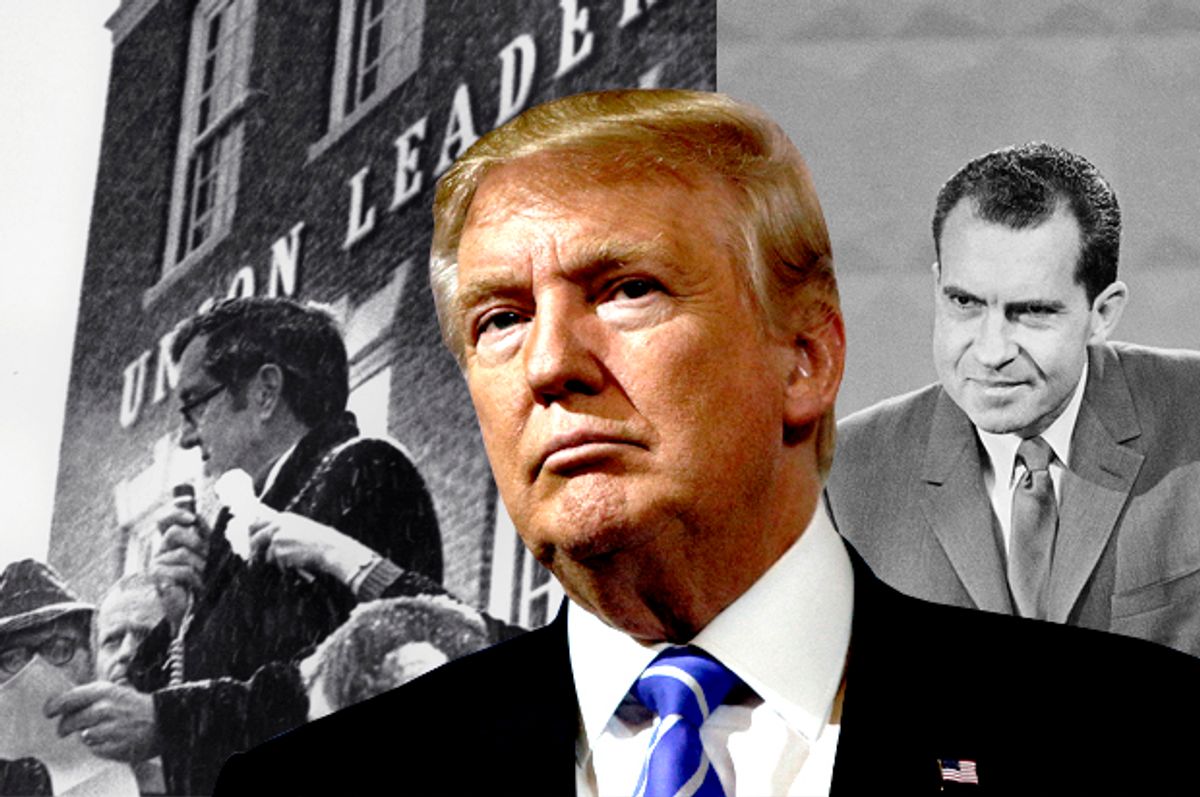 On Sunday afternoon Donald Trump tweeted that he had actually won the popular vote, when the current total shows a lead of 2.2 million votes and counting for Hillary Clinton:

Needless to say this is a lie and the fact that a president-elect would say such a thing is shocking. Setting aside the bizarre nature of his assertion and the fact that his spokeswoman Kellyanne Conway issued a thinly veiled threat on CNN that Clinton had better be careful about contesting the vote if she wants to avoid prosecution, it's important to note that Trump's erroneous "information" has been percolating in right-wing circles ever since the election.

This is just the latest story over the past couple of weeks involving the issue of "fake news" and its effect on this last election. It has been revealed that Facebook, one of the most important news purveyors in the world with 44 percent of Americans saying they get news from the site, was responsible for a vast number of false stories being pumped out to millions of people, most of them helpful to Trump.

Earlier this year Facebook had been hit with accusations of suppressing conservative stories, so the company eliminated human news curators and replaced them with a new algorithm that, well, ended up providing more conservative stories. Most of them were fake, many of them focused on lurid pseudo-scandals about Hillary Clinton.

On Reddit, a Clinton fake scandal called #Pizzagate continues to rage. It is entirely false, yet the site's Trump-supporting users are up in arms over Reddit's decision to ban the board that had fueled the conspiracy theory, involving accusations that Clinton had been running a pedophile ring out of the back of a pizza parlor. Reddit would not have banned it if its users hadn't been publishing the private information of innocent people and accusing them of pedophilia.

Over the Thanksgiving holiday, The Washington Post unveiled a big story about Russian involvement in disseminating fake news. Other news outlets have tracked down fake news purveyors as well, including individual entrepreneurial types as close as California and as far flung as Macedonia and the nation of Georgia, where the perpetrators coincidentally found that fake news benefiting Donald Trump could be very lucrative on the internet. The Post article has been challenged for its reliance on a questionable group that claims to be tracking fake news sites that aren't actually fake news sites. (And there's good reason to suspect that much of the spike in fake news traffic came from good old Matt Drudge, a phenomenon that I wrote about months ago.)

The Intercept published a fascinating account of fake news being created by Floyd Brown (a famous associate of Trump intimates Kellyanne Conway and David Bossie and the founder of the right-wing "oppo" group Citizens United, which drove Whitewater coverage in the 1990s). It's not surprising that the man who created the Willie Horton ad would be involved in an enterprise like this. The article also tracks fake news stories circulated by the site Lifezette of possible Trump administration hire Laura Ingraham and far right institutions like World Net Daily.

The upshot of all this is that regardless how this fake news is circulated, the right wing has a much greater appetite for it than the left. Donald Trump was the perfect candidate for a moment when lies are given huge circulation among people eager to hear them. He is an accomplished con artist, who knows how to tell people what they want to hear.

But let's not pretend that this particular approach to politics was invented by Trump and some internet entrepreneurs in Macedonia. The Republican Party has been doing this on a smaller scale for nearly 50 years.  In fact, it was perfected by minions of Donald Trump's political inspiration, Richard Nixon, the originator of the phrase "silent majority" and "law-and-order president." It started at the University of California during the late 1960s and it has a very evocative name: "ratfucking." That phrase was coined by a man named Donald Segretti, who was hired to run an oppo operation for the Nixon campaign in 1972. (There's a famous scene in "All the President's Men" where Segretti's character confesses what it was all about.)

Ratfucking is usually defined broadly as "dirty tricks" and it certainly is one. But it means something more specific. As Rick Perlstein wrote in Esquire last month, it's a game in which false information is generated and circulated to the media and blamed on someone else. Perhaps the most famous example was the "Canuck letter," whereby Segretti & Co.  forged a letter to the editor of the Manchester Union Leader in New Hampshire, claiming that former senator Edmund Muskie, then the leading Democratic candidate for president, was bigoted against Americans of French-Canadian descent. Muskie was compelled to give a speech in the snow refuting the charge. Media outlets claimed the snow on his cheeks were tears and it effectively ended his campaign.

As it happens, a man who proudly wears a tattoo of Nixon on his back and who was among Nixon's band of ratfuckers, was also involved in Trump's campaign. That would be former campaign operative and full-time agitator Roger Stone. His involvement in the WikiLeaks hacks has been the subject of much speculation, and Stone has hinted broadly that he had a hand in that operation. It would be a break with the ratfucking tradition for him to admit it outright.

As for the fake news, we may never know if the popularity of fake news from overseas and nonpartisan actors was driven by a desire to see Trump elected president or by the simple fact that Trump's supporters will believe anything. But an article by The Washington Post's Philip Bump tracks Trump's "millions of illegal votes" lie to its homegrown origins in the right-wing fever swamps, where it's been circulated everywhere by way of Matt Drudge as well as Alex Jones, Roger Stone's good friend and ally. And the president-elect is now directly helping circulate it via his Twitter feed to millions. Even Nixon didn't get his hands dirty with tricks like these.