Fascinating world views from an ancient temple in Thailand to a patriotic dog in Havana, Cuba 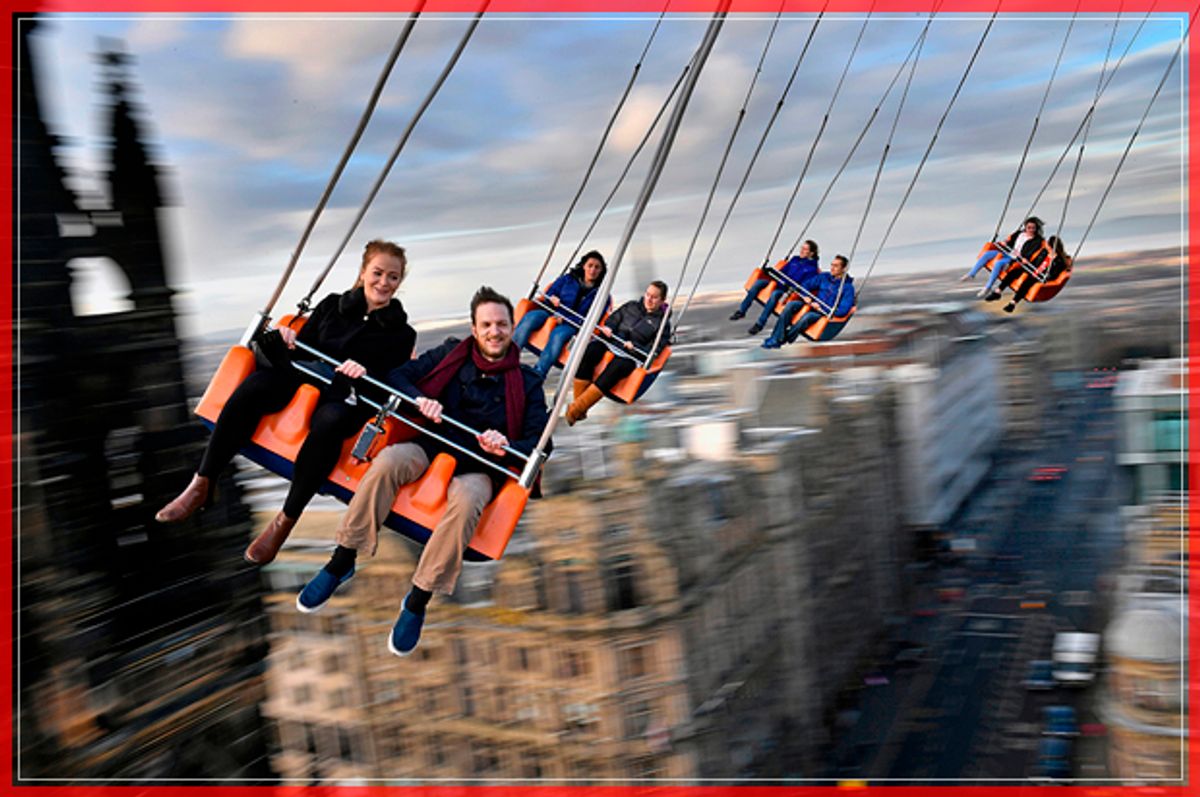 EDINBURGH, SCOTLAND - NOVEMBER 28: Members of the public enjoy a ride on the star flyer on November 28, 2016 in Edinburgh, Scotland. The star flyer is one of a number of rides situated in Princes Street Gardens in Edinburgh along with an ice rink carousel and Big Wheel, open from late November and running until January 7, 2017. (Photo by Jeff J Mitchell/Getty Images) (Getty Images)
-- While Americans were stuffing themselves and their relatives full of turkey and all the traditional fixings, one Thai town threw its annual banquet for the macaque monkeys that live in the local temple. The “monkey buffet,” a dazzling array of colorful fruits and vegetables built into impressive displays, honors not only the temple inhabitants in the flesh, but the monkey god Hanuman, who is thought to be invincible. While your family Thanksgiving may have devolved into the metaphorical equivalent of a monkey buffet food fight, at least you weren't stuck cleaning up after 2,000 primates hopped up on a natural sugar and adrenaline high.

Havana, Cuba   Pedro Pardo/Getty
A dog adorning glasses and a hat with the Cuban flag sits in the middle of the street in Havana Leftist Twitter absolved Castro. Liberal Twitter is treating his legacy tepidly at best. President-elect Trump et al. cheered his death. My girlfriend would've cucked me out to Castro in a second. Human Rights Watch — who sabotaged the Colombia-FARC peace accord — has criticized him. I think this dog has a hotter take on Castro than I do. In the words of the fictional Auntie Mame, we need a little Christmas now. Also Hanukkah, Kwanzaa and Festivus. And as we take the final lap around this very special annus horribilis, we should take full advantage of any joy or pleasure that comes our way, whether it's a Netflix binge-fest or a spin on a ride, like these revelers in Edinburgh. In the darkest of days, we've got to hold on to what remains merry and bright.

Tokyo, Japan   Behrouz Mehri/Getty
A man pulls a bell rope during the sake festival at the Koami Shinto shine in Tokyo Perhaps it's American Exceptionalism that makes us think we're the only nation with a tradition of giving thanks for the bounty of the autumn harvest. Each November 28th, the doboroku (home-brewed sake) festival is celebrated at the 550-year-old Koami shinto shrine in central Tokyo. Visitors, many dressed in traditional garb, come to express their gratitude for the freshly harvested rice, which is used to make the sake, or rice wine. And upon entering they ring the shrine's three bells by pulling on the ornamental ropes. In return for their expressions of gratitude, visitors are rewarded with free sake. It's little wonder this tradition endures.